Despite all the hype built up around the two COMAC C919s that flew from Shanghai to Beijing last week, the Civil Aviation Authority of China (CAAC) — the country’s civil aviation regulator — did not award the plane its type certificate (TC) on Sept. 19. Regulators typically don’t set target dates for milestones. However, many have speculated the date since it coincides with the plane’s designation.

The next significant date on the calendar would be Oct. 1, the National Day of China. The country has been keen to show off its achievements at its annual celebration. Therefore, it would not be surprising if the original target was to have the new aircraft awarded it TC just before the National Day.

Now that the certification of the first C919 seems imminent, will the Boeing 737 MAX finally return to Chinese skies? 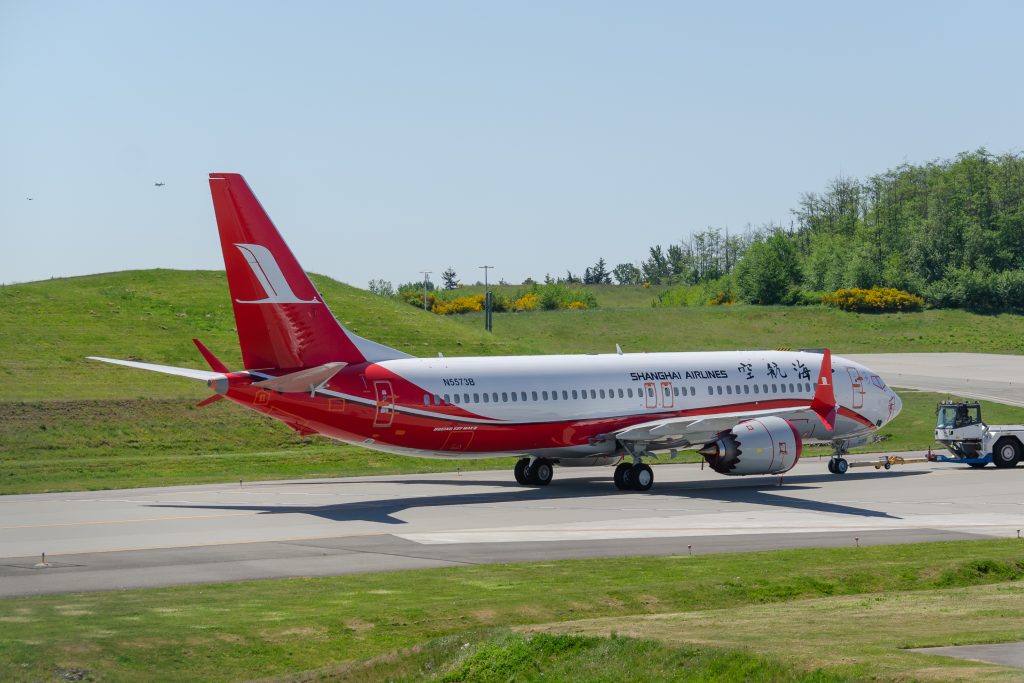 One of the Shanghai Airlines 737 MAX in storage at Paine Field Airport. (Photo: AirlineGeeks | Fangzhong Guo)

Boeing might be the biggest beneficiary of the C919 certification. Due to the complicated political environment, many have speculated that CAAC wouldn’t recertify the 737 MAX until it certifies the C919. Once the country’s ruling party can claim the win for its domestic-built airplane’s certification, it could open the doors for Boeing and let its airline customers in China start growing their MAX fleets again.

The Boeing Zhoushan factory expects the situation to change. Boeing ferried its first post-grounding 737 MAX to China in March. However, the airplane did not arrive at the factory until late July due to technical issues and Covid-19-related restrictions. In August, Boeing China’s President also stated that the Zhoushan 737 Completion and Delivery Center is “ready for the resumption of the 737 MAX delivery in China.”

A Turn for the Worse

However, much geopolitical tension still remains, a fact that could hinder the 737 MAX from returning to Chinese skies. The pressure hit a climax after U.S. Speaker of the House Nacy Pelosi visited Taiwan in August. In the month following, Boeing announced it would start removing engines from its Chinese Operators’ inventories to support new productions. Concerns are also growing about the effect of strict Covid-19 restrictions on domestic traffic growth.

On Sept. 15, Boeing CEO David Calhoun suggested the company would begin remarketing airplanes earmarked for the Chinese Operators. Due to the grounding, China-bound 737 MAXs account for over half of the 290 aircraft on hand. The Chicago-based company expressed unwillingness to sit on the inventories indefinitely.

According to surprising new information from the CAAC on September 20, the two parties met on the day before Boeing’s Sept. 15 statement. The timing cast some doubt on the substance of Calhoun’s threat, but it’s clear the manufacturer is getting impatient. It’s also possible that CAAC only released the statement to lower the tension in response.

Despite the recent revelation, airlines appear to be optimistic in the months leading up to September. Three airlines have started flexing 737 MAXs that stayed grounded even after completing rework at the start of the year. In addition, two airlines have only recently started reworking their 737 MAXs for service.

According to social media posts, on Aug. 19, Xiamen Airlines completed rework on one of their 737-8s, registration B-1288. The all-Boeing airline spent 3,500 man-hours in getting the plane ready and ferried it to its home airport, Xiamen Xiang’an International Airport, on Aug. 20. However, it flew the same aircraft back to its storage location on Aug. 31. The plane made a short hop to its Fuzhou, China hub before continuing to Yinchuan, China, where the aircraft was stored for the past three years.

According to the Chinese flight tracking service Variflight, Shandong Airlines also moved one of its 737 MAXs last month. The aircraft carries registration number B-1120, first flew on Aug. 15 from Linyi, China, to its hub at Jinan, China. It subsequently made three roundtrips between Jinan and Linyi on Aug. 26, Sept. 5 and Sept. 17. The Jinan-based airline had to lease five used 737 NGs in 2021 due to the grounding of the 737 MAX. Therefore the official ungrounding would be well-received by the all-Boeing airline.

However, there is no definitive signal in the public domain that the plane will return to commercial service soon. While it’s a positive sign that more operators started getting the MAX ready, it won’t be a surprise if the CAAC keeps the Boeing jet grounded until C919 starts commercial service.