The week leading to Christmas is usually a very busy travel period in North America, but this year it has been made particularly chaotic by Winter Storm Elliot, an extra-tropical bomb cyclone that created blizzard conditions over large parts of the United States and Canada and wreaked havoc into airline schedules.

Almost 20,000 flights have been canceled throughout the days before and after Christmas, and the emergency has disrupted holiday plans for millions of people that could not reach their intended destinations to celebrate the festivities.

One airline in particular has been hit very hard by the storm: Dallas-based Southwest Airlines, the progenitor of low-cost carriers around the world, has been forced to cancel over two-thirds of its schedule on Monday, Dec. 26, and according to FlightAware.com it has proactively canceled almost 60% of its flights also for Tuesday, Dec. 27, due to an unprecedented meltdown of its operations that has affected both Southwest’s Customers and Staff alike. 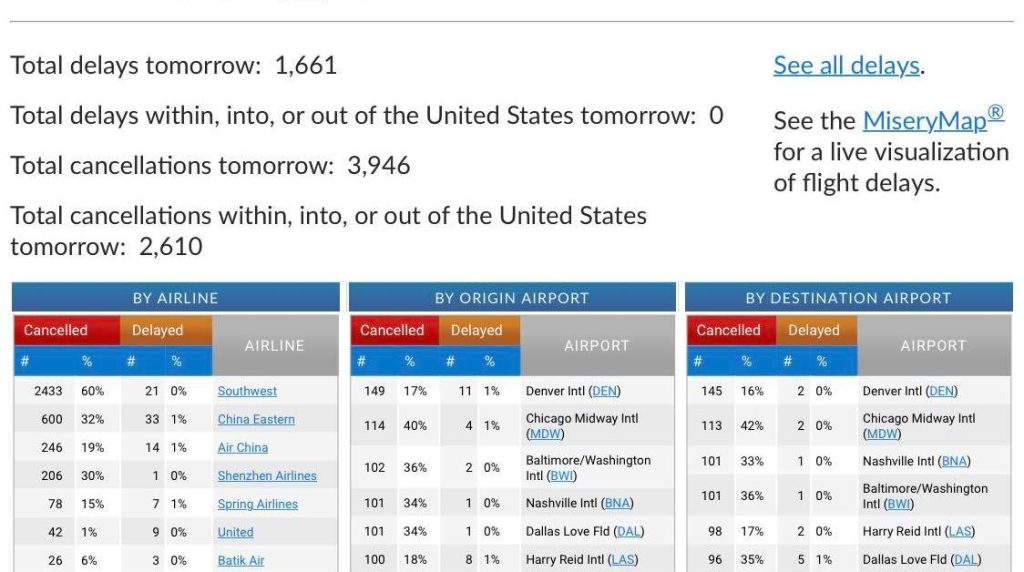 “With consecutive days of extreme winter weather across our network behind us, continuing challenges are impacting our Customers and Employees in a significant way that is unacceptable –Southwest Airlines posted on its website on Monday – […] These operational conditions forced daily changes to our flight schedule at a volume and magnitude that still has the tools our teams use to recover the airline operating at capacity.

“This safety-first work is intentional, ongoing, and necessary to return to normal reliability, one that minimizes last-minute inconveniences. We anticipate additional changes with an already reduced level of flights as we approach the coming New Year holiday travel period. And we’re working to reach to Customers whose travel plans will change with specific information and their available options”.

The airline, therefore, expects to be forced to make many other significant adjustments to its flight schedules during the last days of 2022 and it is reasonable to believe that it will take some time before the situation can return to normality.

All airlines in the United States and Canada have been affected, but no carrier was forced to cancel such a large percentage of its flights in order to cope with the extraordinary situation. In fact, the weather is only partly to blame for this disastrous breakdown of systems and procedures. CNBC reports a staff message from Southwest CEO Bob Jordan that pinpoints the Crew Scheduling system as a major culprit for the situation: “Part of what we’re suffering is a lack of tools,” Jordan said “We’ve talked an awful lot about modernizing the operation, and the need to do that. And Crew Scheduling is one of the places that we need to invest in. We need to be able to produce solutions faster.”

Southwest Airlines operations follow a model that is quite unique in the airline business: while most of the major carriers in the United States operate a hub-and-spoke system, where most of the flights are operated in and out of large hubs where crews and maintenance are concentrated, Southwest operates flight very differently with aircraft and crew that follow a multi-segment schedule taking aircraft and personnel across the country in very long cycles that may be more complicated to be restored once a major external factor disrupt regular operations.

Also, until not too long ago the software tools used by Southwest Airlines for their day-to-day operations were developed in-house by the carrier to suit their own particular business model, while most of the other carriers in the United States and around the world had outsourced the development of IT solutions to specialized companies serving the entire industry with their standardized solutions.

The Texas-based carrier has even chartered buses in order to carry their passengers to their final destinations, as it has been reported by ABC11 in Raleigh-Durham, North Carolina. Some passengers confirmed they were boarding a bus to Nashville, Tennessee, an approximately nine-hour drive, as an alternative solution arranged by Southwest Airlines after their flights had been canceled.