Etihad Airways Takes Delivery of Their First Airbus A380

Etihad Airways, the national airline of the UAE has taken delivery of their first of ten A380 aircraft, a major milestone in the Abu Dhabi based airline’s ambitious expansion plans. 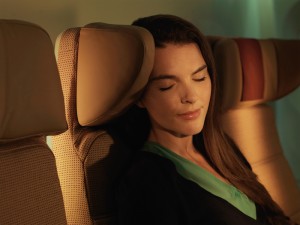 The new A380 is configured in a four class configuration, featuring a new economy cabin with a new fixed wing headrest, designed for better sleeping posture, a feature that many travelers will appreciate on longer flights.

The new business class cabin features their new Business Studio seat, which maximizes space by having some of the seats rear facing, a design pioneered by British Airways. The seat also has one of the longest business class beds in the sky, clocking in at 6’ 1’ long, (1.8 m) a design feature that taller flyers will appreciate.

In the pointy end of the plane, Etihad blew their main competitor, Emirates, out of the water with their new First Apartment suites. The First Apartment features staggered seating designed to maximize space, comfort and most importantly, privacy. Like Etihad’s other first class cabins, the flights also feature an onboard chef, and dine on demand, though that feature has been criticized by many, as they often run out of food on longer flights. The cabin also has a shower available for use for all first class passengers. 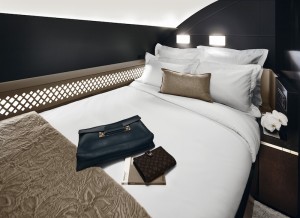 The fourth cabin in the plane, The Residence, is a two room suite, featuring a private lavatory, shower and a double bed, located in the front end of the first class cabin, directly above the cockpit. The cabin is the ultimate in inflight luxury and extravagance, and with a price tag of $21,000 (or 2.3 million Etihad Guest miles) one way for a London-Abu Dhabi flight, this cabin is aimed at the ultra wealthy who would otherwise fly privately.

The first flight of the Etihad A380 will take place on 27 December, from Abu Dhabi to London Heathrow. They also plan on using the aircraft for all three of their daily frequencies to London, on at least one of their two daily services to New York JFK, and on their Sydney service, a route that helps the airline competitive on the lucrative Kangaroo Route from Europe to Australia.

The delivery of the A380 to Etihad Airways gives them a new edge against their competitors, from a reinvented cabin service, to the money they will save on fuel from the new aircraft.

DHL Express and Seattle-based aircraft manufacturer Eviation have teamed up to "electrify aerospace." On Tuesday, DHL announced it is building the first-ever electric aviation network and has ordered 12 Alice eCargo jets from Eviation. The partnership will pioneer sustainable aviation and shape the future for zero-emission cargo and passenger flights.…