Aviation enthusiasts, along with journalists from the D.C. area wait for an inaugural flight from Asia to touch down at Dulles International Airport this past summer. | Photo provided by Ryan Ewing

The AvGeek Passion: A Look Into the Eyes of an Aviation Enthusiast

Everyone has something that drives them along. It’s a passion, whether it’s hidden deep inside of a person or is already in action. For some, aviation lives in their heart. These certain people have usually been involved in the flying industry for quite sometime. Most of the time, since childhood.

These people are self-described “AvGeeks.” You can just search the term on Google and you’ll get around 536,000 results. The term “AvGeek” is derived from “aviation geek,” and is just a short 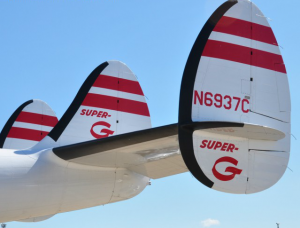 way to get the point across on social media platforms.

You don’t need to be in the aviation business to be an AvGeek. You could be deathly afraid of flying and still be considered one. An aviation geek is someone who is passionate about the latter industry.

There are countless ways that you can express that love, as some like to say, for aviation. Of course, you can fly. You can also go planespotting, read and write about aircraft and even work at the airport as a waste disposer. Some like to volunteer for museums that focus on the preservation of vintage, historically significant aircraft.

One such volunteer is JL Johnson. He volunteers at the National Airline History Museum (NAHM) in Kansas City, Missouri at the Wheeler Downtown Airport.

JL arrives at the Spirit of St. Louis STEM Expo and Airshow at the Spirit of St. Louis airport, a regional airport in Chesterfield, Missouri. He parks his minivan, full of a canopy and a Rodger Dodger flight simulator donated completely to NAHM by donations from people dedicated to the aviation industry. He and another volunteer unload the canopy and struggle to set it up. All of the minivan’s contents are then taken under the tent. As he’s doing all of this, JL talks about how he caught the aviation “bug.”

“I’ve always been interested in planes,” JL said. “But it really caught on for me when I was coming home from a business trip.”

That night, he was walking around the economy parking lot, right before runway 19 left, looking for his vehicle after a business trip. He noticed that airliners were coming in one after another.

“That was the real big push,” Johnson continued.

JL and his assisting volunteer set up the flight simulator. The setup is equipped with a yoke, throttle quadrant, control panel and wrap around monitors to give the it the real feel.

The airshow officials do not have electricity available unfortunately. So, JL finishes hanging a banner that bare the eye-grabbing words “The Flight of the Connie | Presented by the National Airline History Museum.”

“I think that as a country, we need to be better with our volunteer hours and give back,” he says, tightening the last ziptie. “I guess that kind of makes me an aviation liberal because I want to give back to everybody, right?” Johnson says as he chuckles.

“You can’t ship a pilot overseas. You can’t have people in China loading our bags. The aviation industry is one that is always going to have a place in the economy.”

The volunteer’s are still waiting on power. Airshow officials have been contacted and are very reluctant to reply. The two sit around, waiting for something to happen, discussing the ever-evolving industry that they are involved in. 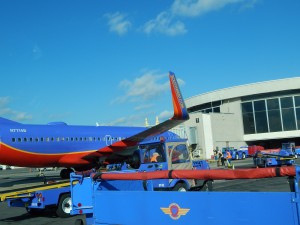 “From the perspective of the economy, many of these jobs can’t be outsourced,” JL said. “You can’t ship a pilot overseas. You can’t have people in China loading our bags. The aviation industry is one that is always going to have a place in the economy.”

That statement couldn’t be anymore true. As of 2014, just the airline portion of the industry alone, excluding the rest, contribute five cents to every one dollar in the United States economy.

“They tend to be good paying jobs, depending on who you ask of course.”

Talking with another pilot, who chose to speak under the condition of anonymity, it was clear that the passion for aviation is true.

“Even some of the greatest poets in the world couldn’t describe the magic of flying,” she said. “They were right, I’ve tried. That’s okay though, because you either get it or you don’t. The ones that understand it don’t need an explanation and the ones that don’t understand it are just going to look at you like you’re crazy anyway.”

Power! The displays, controls and lights all come to life on the flight simulator, calling to the mortal world to be setup for it’s real purpose. JL runs–no, fast walks–from the generator to where his volunteer is already preparing the computers for their first customer.

You see, the National Airline History Museum isn’t just in town to show their lovely, glowing faces; they’re here to make some money. The museum is on it’s final stage of rehabilitating a Lockheed

Constellation that suffered an engine fire at a previous airshow. They’ve also spent the last 20 years restoring a former TWA DC-3 to it’s former potential. This aircraft is also in it’s final stages and is set to take flight, out of retirement, in 2015. The museum wants to get the aircraft done as quickly as possible.

“‘The importance of the airplane as an instrument as a national and international influence can not be overlooked.’”

“Maintaining and restoring these aircraft is an expensive proposition,” said John Roper, Vice President of Operations at the National Airline History Museum. “Many of our volunteers are former TWA employees who have dedicated many of their golden years to the restoration. Sadly, as time passes, we are losing our legacy members due to age.”

The museum is attempting to achieve donations to the cause of making these aircraft go “wheels up” by charging for the use of this flight simulator.

While looking on at a user of the simulator, JL continues, “Tom Braniff, one of the founders of Braniff Airlines said, ‘the importance of the airplane as an instrument as a national and international influence can not be overlooked.’”

That quote still rings true today. It’s planes that enable all businesses to function both internationally and domestically.

“Is this going to be hard?” continued Roper. “Yes. Is it going to be worth it? Absolutely.”

The Navy’s Blue Angels Demonstration Team roars over the heads of the crowds. The team has not been to the Spirit of St. Louis Airport in almost ten years. The crowd is accompanying the engines of the royal blue and gold FA-18’s. 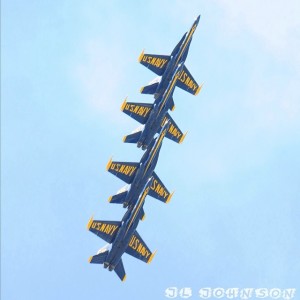 The Navy’s Blue Angels climb up to 15,000 feet, just before passing in front of the moon. | Photo provided by JL Johnson

As five of the aircraft fly just at 15,000 feet, they pass right in front of the moon.  This moment is what every planespotter, like JL, dreams about. He excitedly rushes under the tent to get a look at his beautiful picture. He’s in awe, saying that this is the first of the kind that he’s captured.

Just as things settle down, the ground shakes and an extremely loud bang comes from above. He rushes outside to see a solo pilot, in Blue Angel Number 1, racing out over the hills away from the crowd.

“I’ve never seen anything like that before. It brings tears to my eyes.”

One of the volunteers decides to hop on Twitter and Tweet “@BlueAngels A LITTLE WARNING IS APPRECIATED BEFORE SCARING ME!”

The skilled team performs similar maneuvers to the one that they just did a few more times, spanning through another 20 minutes.

After landing, a pilot replies to the NAHM Volunteer saying “Consider yourself warned. #Tactical”

“That’s incredible,” a voice of an elderly woman echoes in the background. “I’ve never seen anything like that before. It brings tears to my eyes.”

It’s time for everyone to file out and go home for the day. JL and his team clean up after themselves. He thanks the volunteer for coming out for the day, appreciating every little moment that he’s been able to spend. As he’s helping clean up, he reflects some more on flying.

“I’m very passionate about the community,” he says thoughtfully. “I’m very engaging. I want people to be excited about this. This is the future.”

As he talks, a small child walks across the taxiway to a fabric biplane. The child touches it, as if it’s the most amazing thing that he has ever laid his eyes on.

“If I ever knew what a future pilot looks like, that’d be one right there,” passerby’s comment on the kid.

“This is an industry that I’m in love with. I don’t work in the industry nor do I think I want to. Just to be a part of it is really exciting.” 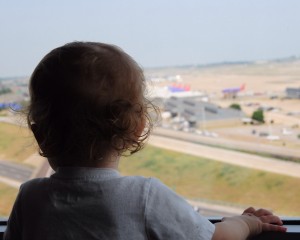 JL’s young son, also named JL, watches out the window at the Renaissance Hotel as some Southwest 737s move around at Lambert-St. Louis International Airport. | Photo provided by JL Johnson

He begins to talk about the American and US Airways merger that will be finalizing later this year, then transitioning into the hobbies of some AvGeeks.

“You’ve got people who take pictures of planes,” Johnson says, pointing out a photographer capturing a breathtaking Learjet 35 sitting on the taxiway. “You have people who go out and record the numbers on planes and then go back home and track the movements of the aircraft. Why? Because that’s their thing.”

This is one of those industries where you’re either in love with it, or can’t stand it at all. However, no one can resist looking up to see that jet shooting across the sky on it’s way to somewhere, potentially thousands of miles away. It could be Curaçao, London or Los Angeles, but to you, the destination is unknown.

“It’s planes that won World War Two,” JL points to the old fighter, quietly sitting on the other taxiway across from him. It’s wings are folded up and it is ready to rest for the night. “It’s planes that enable business to function both internationally and domestic. It’s planes and airports that are providing jobs. It’s keeping regular people and hobbyists alike interested. This is an industry that I’m in love with. I don’t work in the industry nor do I think I want to. Just to be a part of it is really exciting.”