For all the trip reports about A380s that I have read, I have noticed few about Qatar’s A380. I knew a bit about what to expect since I was flying in economy for this one, but still wanted to see if the Middle Eastern carriers were able to provide an exemplary experience similar to what they did when I flew Etihad’s business class only a few weeks before.

I was scheduled to have a quick flight from Abu Dhabi to Doha, and then travel on Qatar’s A380 to London. With only a 45 minute transfer window, I was more than worried. After flying so many times domestically in the US with varying layover times, I had learned better than to ever book something with a short window. Whether it was flight delays or lost baggage, something had always seemed to go wrong. However, I was truly shocked at how different my experience was when flying into Qatar’s brand new Hamad International Airport. 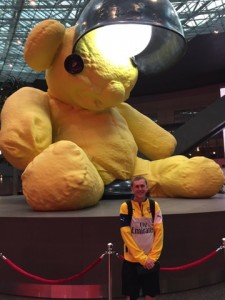 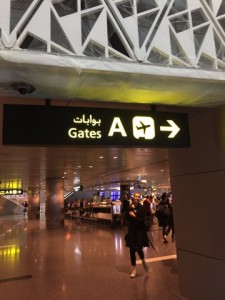 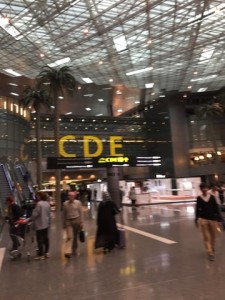 Hamad International was officially opened in April of 2014, and was built to accommodate the quickly growing Qatar Airways along with the expected travelers coming for the World Cup in 2022. Doha’s previous airport, Doha International, was known for its lack of jet bridges but also its premium terminal for its first and business class passengers, similar to what Lufthansa offers in Frankfurt. The new airport has all the glitz and glamor of a new city, with plenty of natural light, advertisements, and duty free offerings.

We arrived on our flight from Abu Dhabi at 6:40 a.m., and being the conservative passengers we were hurried to security and transfers as quick as we could. Before our flight from Abu Dhabi, each passenger with a short connection was provided with a special yellow and orange envelope with the words “Short Transfer” on them. This allowed us in Doha to hurry to the shortest security line. We were nearly shocked to find that security only took about five minutes, and before we knew it we were on our way to the gate. Of course we had to make a quick stop at the gigantic teddy bear in the main lobby, which is valued at $6.8 million and weighs 35,000 pounds.

We proceeded to head to our gate, and there stood the A380 and all of its sizable majesty In what I have read about the aircraft, some passengers have said that words can not do justice to how big this airplane truly is, let alone its massive four engines that power the giant. Qatar puts its first and business class passengers on the upper deck, along with a small group of economy passengers that have elite status with the airline. Our seats on the other hand were on the bottom deck on the left side, strategically selecting both an aisle and a window seat in hoping that no one would select the middle seat. Sure enough, no one did, and we had a row to ourselves.

From my personal perspective, the bottom portion of the aircraft could not have been more than 60% full. Most groups seemed to be well spaced out with their choice of seat. Awaiting us at our seats was a small blanket and our spectacular entertainment system. Fun fact, the blankets offered by Qatar are nearly the same as what is offered by American Airlines. The screen itself is 10.6” and is touch screen, offering not only easy selection but pinch-to-zoom features similar to a smartphone. In addition to the screen itself was a small remote control which could be used for multiple functions such as emailing or texting, but also was touch screen and offered the ability for passengers to track the flight status on a map on the controller while also watching a movie on the big screen. This proved to be a very neat feature, as being the excited flyer that I am loved watching the trip’s progress as well as my movie. The seat had an adjustable headrest, and while thin had plenty of padding to make it just comfortable enough for traveling. 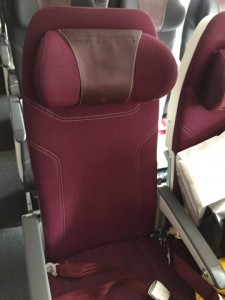 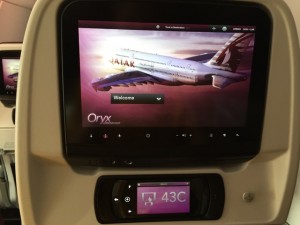 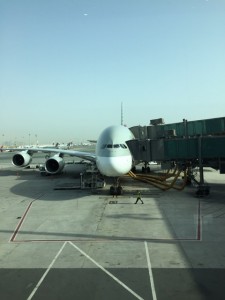 Takeoff was easy and quiet, just like any other A380. Shortly after takeoff and reaching 30,000 feet, the seatbelt signs were turned off and the cabin crew sprung into action. The flight time was clocked at just over 7 hours, and as such meant we would be receiving at least one full meal. A member of the cabin crew came on the loudspeaker, and let us know that the menu would be appearing on our screens and we could let them know which one we wanted. To me this was a great idea, but I was surprised the airline didn’t take it one step further and let you order from your screen, similar to Virgin America’s Red System.

With it being breakfast, I ordered the blueberry pancakes. This came with a small cup of orange juice, croissant, yogurt, and some fresh fruit. What surprised me was that real silverware was used rather than plastic for economy passengers. For being airplane food, the pancakes were just fine as was the croissant and fruit. It would be plenty to hold me off until London. After a quick breakfast, I leaned back in my seat, watched a bit of a movie, and slept for nearly the remainder of the flight. 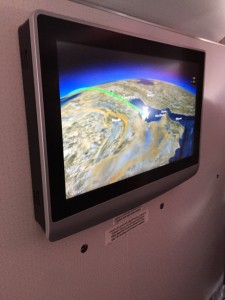 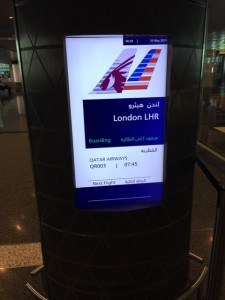 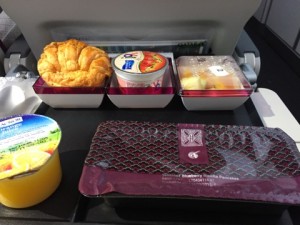 With only an hour until reaching our destination, I awoke and took a quick walk around the cabin. After speaking for a few minutes with the cabin crew, I walked to the stairs that are used to take first and business class passengers to their seats. As beautiful as the mood lighting seemed, the area was roped off and I was unable to walk upstairs. I was really looking forward to checking out the full bar offered, but will hopefully have the opportunity to do so in the future. 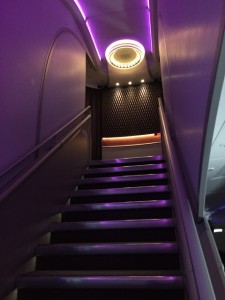 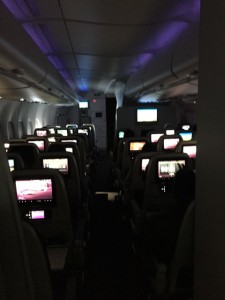 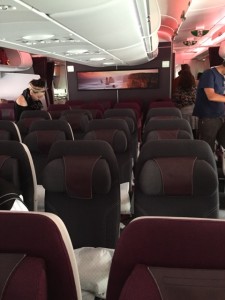 When all is said and done, Qatar offers a great service for those looking to travel from the Middle East to London at an affordable rate. The breakfast was just fine, the seats were comfortable, and the extra space really made the difference in allowing us to sleep. I am very intrigued to see what will happen with Qatar’s A380s. In recent months the airline has shifted its second A380 from traveling to Paris to instead traveling to Bangkok, Thailand. Qatar’s CEO, His Excellency Akbar Al Baker, has made it very clear that he wants this airline to continue to grow, but with only having 6 more A380s on order it will be interesting how the airline chooses to route its super-jumbo jets. I wouldn’t hesitate to fly Qatar again, especially on the A380.

Editor’s Note: As you can see with the map below, Joe travelled practically around the globe. He will be publishing more trip reports soon.