Over six months ago, I had this trip all lined up and ready to go. It was supposed to be a personal graduation gift for not just myself but my girlfriend as well, and after all I had read about Etihad’s newest Boeing 787 Dreamliner, I knew that I had to fly on this route. Sure enough only one day out without any notification, I logged on to Etihad’s website and found the aircraft was downgraded to an older 777-200LR, which meant I was missing out on the opportunity to finally fly in Etihad’s latest Business Studio class with all its spectacular design and features. This wasn’t to knock Etihad’s older business class, but rather to say that a large part of my reasoning behind flying this route was to try out the new 787. 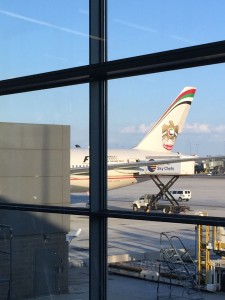 One of the neat features about flying business class on Etihad is the free chauffeur driver that is offered. I was able to fly into Washington D.C. and meet up with a friend for most of the day, and then was soon whisked away in a black car to Dulles International Airport. For those that aren’t aware, Dulles is way out there in Virginia, and not exactly the easiest airport to get to. They have been supposedly trying to build a metro rail line out there for years but have faced numerous setbacks. Having the driver available made the trip just a little bit easier. We arrived to IAD about 3 hours before flight time, and after taking the train to Concourse A we had a short walk upstairs to the Etihad lounge. 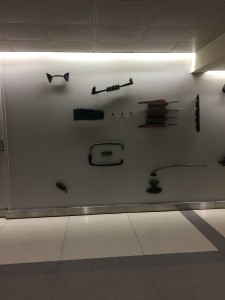 We were quickly greeted by Etihad staff members and were given a short introduction to the lounge and all of its features. Etihad truly offers a beautiful lounge at Washington Dulles even though it only operates one flight a day from this airport, but it still has the lounge open all day for a contract it has in which Saudia Airlines uses its lounge for an early-afternoon flight. The lounge itself was nothing short of stunning, and even though the second floor wasn’t used due to the number of passengers on this flight, we still had plenty of space to obtain everything we needed. 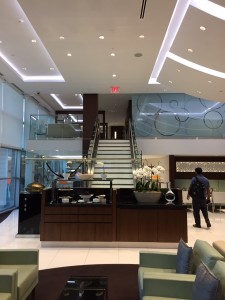 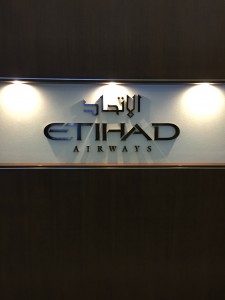 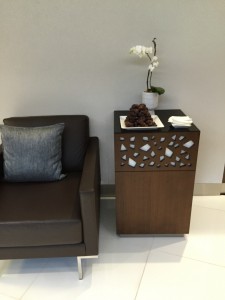 I was able to grab a nice shower once I entered the lounge, and was certainly surprised at how much effort Etihad puts into make sure every part of the lounge is taken care of. Everything was cleaned, and someone from Etihad’s staff was waiting to clean even after each person showered.

After a quick shower, I took a seat in the lounge and was offered a dinner menu for before the flight. In addition to the ala carte items, there was also a buffet of Arabic food including hummus and fruit. Service was quick and attentive, and more importantly, it was refreshing to have staff take such an interest in you before you fly.  Maybe this is how it works always in business class? I was able to order some of the best lamb I have ever had, as well as a delicious cheesecake to finish off the meal.

At about 9:30 p.m., one of the agents came over and informed us that both Business Class and First Class passengers could board at any time. Being the excited travelers that we were, my girlfriend and I boarded immediately and were seated in our older yet still suitable business class seats. Etihad’s business class is interesting in that it is in a 1-2-1 format like most business classes, but alternates in the way its seats are positioned. For example, the window seats alternate between close to the window seat with a small table on the side, to an aisle seat with a small table closer to the window. The middle seats do something very similar, offering 2 seats that are close together (perfect for couples) with tables closer to the aisle, or 2 seats that are closer to the aisle with tables separating the two. 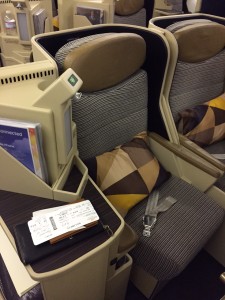 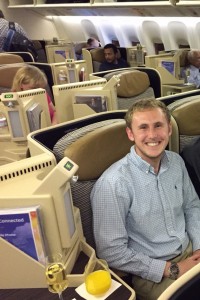 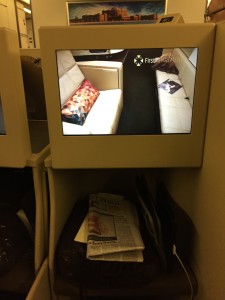 As we boarded, we were offered the option of champagne or juice, in which I selected the former. We were served Champagne Jacquart’s Brut Mosaique, which while only being a $35 bottle, proved to be just fine for our palates. In front of us was Etihad’s E-Box, which offered more movies and TV shows than I could count. You could tell that the TV was a little outdated but served just fine for our travels today. Each seat in business class is fully flat with plenty of legroom, and the seats also offer a massage feature in order to keep your blood stream moving on such a long flight. Right next to our seats on the ottoman was where we found our blanket and the menu for the flight. The flight was clocked at 13 hours, which while normally would seem painful, proved to be quite easy as the night flight allowed us to sleep a great portion of the trip.

The captains came on over the microphone and spoke Arabic first, followed by English, announcing the flight time as well as expected arrival and weather conditions. Our flight departed a few minutes after 10:30 with nearly a full business and first class. Once midair, pajamas were distributed for those who requested them. I find this part to be slightly weird, as most airlines go around the cabin and distribute accordingly rather than only provide them to who has requested them. The pajamas were comfortable but also slightly heavier than what I was used to, and while the zipper on the shirt was slightly annoying it allowed for a much more comfortable option to sleep.

After takeoff and reaching cruising altitude, orders were taken for dinner. The menu is pictured below, but was plenty satisfactory for what I was expecting. 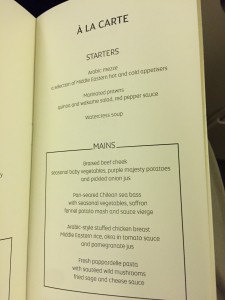 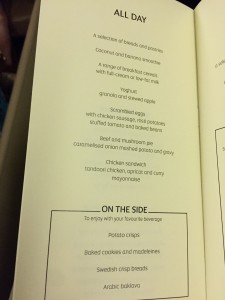 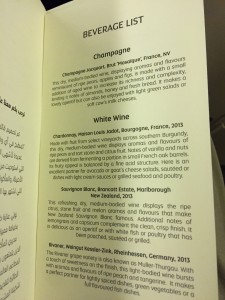 During dinner I was able to watch the movie Kingsman which I really enjoyed. Small thing I noticed that most people probably wouldn’t care too much about, but most explicit words are edited on Etihad’s E-Box. Even though the film is clearly rated R and comes with a warning label, it still edits nearly every inappropriate word out. Can’t say I am surprised though!

Throughout the flight I must say I was disappointed on only two accounts. The first was the timely service during dinner and throughout the flight. I have read that service from the Middle Eastern airlines tends to be more passive and available when you press the button, which proved true. However, anytime I seemed to request anything service seemed to take at least ten minutes or more. At one point I asked for a glass of water, and the flight attendant kept coming by so I assumed he forgot. I then proceeded to simply walk up to where the cabin crew sat and just requested it there. The other issue, and I’ve read this on multiple sites as well, is the temperature of the cabin. A warm cabin might be an understatement because with a shirt and pair of pants I was sweating. I rotated the air filter to allow more air to come in, but it had a minimal impact. The blanket itself was comfortable as could be and I wanted to try it out, but the blanket only made it warmer and nearly impossible to sleep.

Finally after my movie and changing into pajamas I was able to put my bed in the fully flat mode and slept for nearly seven hours. It wasn’t perfect sleep as the heat was still nagging, but it still was just fine for sleep on a plane. When I awoke it was only about three and a half hours outside of Abu Dhabi, so I put on another movie and was offered breakfast from the ala carte menu. While the eggs were just okay, the rest of the meal with sausage and bread options were just fine. 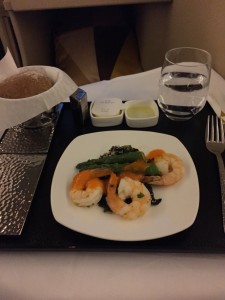 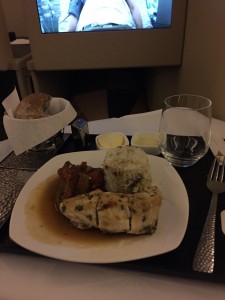 We touched down only a couple of hours later, a few minutes ahead of schedule, and were surprised at how long our taxi to our gate took. With that being said, the taxi itself was amazing for an AvGeek like myself who was able to look out and see the construction on Etihad’s brand new mid-field terminal that is under construction. After about twenty minutes of taxiing, we arrived at our gate and were provided fast track cards for customs. Customs took longer than expected with our line, but once exiting customs we were on our way to Etihad’s Arrivals Lounge. While I personally don’t feel the need for an arrivals lounge unless you are heading directly to a business meeting (which is where the nice showers and meals come in handy!), I did my best to take advantage of some of its features.

Free drinks and some food options were offered, but more importantly I was excited to try out Shave, which is Etihad’s personal barber. Reading online told me that Shave was only free to first class passengers, but after seeing multiple business class passengers go in I tried my luck and found it was free for me as well! Ali did a phenomenal job with my shave, and was more than friendly while providing an excellent service (I sent my compliments to him via Etihad’s social media team later during my trip). I am pretty sure my girlfriend was jealous that anything similar wasn’t offered for women, but I was more than enjoying myself!

Right after visiting Shave, we walked a few more feet toward the Etihad Chauffeur and whisked away in a black Audi to our hotel, the Hyatt Capital Gate.

Overall I must say I was very impressed with Etihad’s service. The lounge and the service provided was phenomenal, the chauffeur did what it needed to do, and even with an older business class I was more than satisfied with the experience. Where Etihad seems to fall short is on the little things that might make a big difference for frequent business travelers. In my mind, if there is a major aircraft downgrade such as this, all travelers should be alerted immediately of the situation. In addition, service was spotty on the flight and a cabin that warm makes it quite uncomfortable for traveling. I would recommend in the future Etihad should error on the side of a cold cabin as blankets are offered to all guests. I wouldn’t hesitate to fly Etihad again, and hope I will get a chance to later this year or early next year.

Editor’s Note: This was only part of Joe’s multi-leg trip around Europe and the Middle East. You can view a map, powered by our friends at TripLine.net, of all the destinations he visited. Joe will be publishing more trip reports soon on his trip.

Two U.S. regional carriers are largely prevailing as victors in a battle for survival as airlines globally continue to weather…

Virgin Atlantic has written to its pilots asking for volunteers to operate flights in July, admitting it didn't have enough…

Despite diminished demand, shrinking fleets and network cuts affecting airlines around the world as a direct result of the COVID-19…