WestJet To Begin Service to London-Gatwick

Known for its low-cost flights in Canada and annual Christmas Miracle event, WestJet has announced that its first trans-Atlantic destination will be London, UK.

Previously only known for its domestic flights within Canada, WestJet has slowly expanded to add more destinations in over 90 locations throughout North America, South America, Europe and the Caribbean. The airline was able to add this long-haul destination due to the recent acquisition of wide-bodied Boeing 767s. Previously WestJet relied solely on Boeing 737s and smaller Bombardier jets for regional jets, which would not be able to fly the long trip to London. 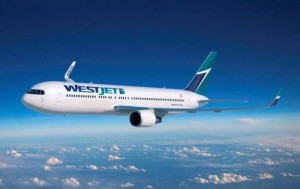 “This news marks the next phase in the international portion of our strategic plan,” according to Bob Cummings, WestJet Executive Vice-President. “WestJet is at the right scale to make this step in our evolution. Combined with our low-cost approach and renowned people-driven service, we have the network, brand and infrastructure to successfully enter and grow in the wide-body market. We look forward to announcing, later this summer, our entire schedule and low-fare approach for the spring of 2016.”

Even in the past few years, WestJet has shown its eagerness to expand over the Atlantic, adding flights to both Glasgow, Scotland and Dublin, Ireland. This was only possible by flying from Canadian cities in the far eastern part of the country such as Halifax and St. Johns, which were within range for the Boeing 737s.

Along with the new routes, WestJet has earned a record profit this year thanks to reduced oil prices and a newly created revenue stream of charges for checked baggage. Last month the airline posted 1.6 million passengers, showing continued growth as international travel continues to pick up speed. WestJet hopes that with the continued low cost of oil and positive customer growth, it can continue to offer service to smaller airports in Europe that are low-cost carrier friendly.

“Well-managed and efficient airports like Gatwick are ideal for low-cost airlines like WestJet,” said Chris Avery, WestJet Vice-President, Network Planning, Alliances and Corporate Development. “We love Gatwick as a convenient airport with great connectivity to central London and access to other low-cost airlines flying to points in Europe and beyond.”

Flying within the Hawaiian Islands is one of the easiest and cheapest flights you'll ever take due to the heavy competition. With many airlines competing on only a handful of routes, flights are usually very frequent and can be above 30-a-day between destinations. Hawaiian Airlines, Mokulele Airlines, and most recently…