It is Thursday afternoon, the day is warm and cloud-free, the atmosphere is positive among the minibus driving myself and my course mates from Hamilton to Auckland Airport in New Zealand. We had just finished the largest section of our airline training, with us all leaving the country holding our Commercial Pilots Licence Skills Test certificate. The next 36 hours would see us travel from Auckland back to the United Kingdom via Dubai. With the final destinations being either London Heathrow, Birmingham, Manchester, Newcastle or Paris – Charles De Gaulle, depending on who you were on my course. For myself, Heathrow would be the final destination.

The flight to New Zealand on Emirates was a typical Airbus A380 evening departure from Heathrow to Dubai, then another A380 to Melbourne for a 45 minute wait, and then back on the same aircraft to Auckland. The opposite was the planned route home. However, after Emirates announced their non-stop service between Auckland and Dubai, I elected to change my ticket over to the non-stop flight, meaning that I wouldn’t have to stop in Australia. It also meant that I wouldn’t be accompanying my course mates to Dubai, who all decided to stay on the original flight going via Brisbane.

Since the announcement of the new non-stop service I had always wanted to change my ticket, then following an email I received from Emirates reminding me that I could change for free before the end of February I gave them a call and was issued a new flight ticket.

I was expecting to find the flight to be quieter compared to the three daily services that take passengers from Auckland Airport to Dubai via Sydney, Melbourne and Brisbane. However I was wrong, my hope for obtaining a window seat behind the wing was quickly vanished when I logged on to my Emirates account to choose a seat. In fact there were no window seats, apart from one which was directly over the wind, which was understandably vacant. I eventually selected 25C. A seat that was just behind the wing, on the aisle and was at the end of the first section of economy seats, meaning I could recline my seat and not feel guilty about it.

We arrived at the airport with good time to spare, as my flight would depart 2 hours after the flight to Brisbane which was taking my course mates. Check in and bag drop was easy and painless, Emirates’ 30kg luggage restriction was no issue for myself and my 24kg bag. For one of my course mates however, his 46kg would have landed him in a rather expensive dilemma.

Getting through security was no issue and the queues were manageable. In fact, the airport altogether was rather quiet, or just not as busy as most international airports. The shops were free from large queues and it only took 5 minutes to order and receive my dinner from Burger King.  As the hours passed it was time for my course mates to move to their own gate for the 7pm departure, I said my farewells and walked back over to a bar that was overlooking the ramp area. Meaning I could enjoy a few beers whilst admiring Air New Zealand’s diverse fleet of aircraft. The airline’s fleet vary from the domestic ATR-72s and Bombardier Dash 8s up to their international Boeing 767s, 777s, and 787s all in various liveries in which the Kiwis are associated. 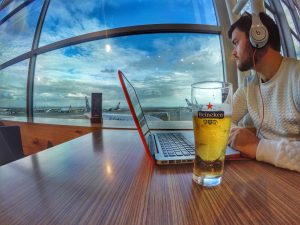 Enjoying the last few hours in this part of the world

As the time quickly approached 9:00pm, I was walking down the jetway onto the Boeing 777-200LR, A6-EWD that would be the aircraft carrying a full load back to the UAE. After spending a long day of cleaning rooms and making sure I haven’t forgotten to pack anything, the thought of a 17 hour flight didn’t really seem to bother me, I was happy with my seating location being only a few steps away from the toilet, an aisle seat allowing my legs to be sticking out slightly to the side, and the ability to recline. I was expecting to be sleeping for the majority of the flight whilst cruising through the night, but I ended up  sleeping for only 6 hours after having 3 naps of around 2 hours each during various parts of the flight. The fact that I was leaving Auckland at 9pm and arriving in Dubai at 5am “the next day” tricks your mind and you debate whether or not you’re actually airborne for 17 hours, which is why I think the flight didn’t go as poorly as many of my course-mates thought it would.

The seats being 17 inches wide were not the most comfortable and you can really tell when the extra inch that the A380 has isn’t there anymore. But being a modestly average bodied person, it wasn’t a big issue for me. Overall, the food onboard was pretty good. The good thing about Emirates is that they recognise they are flying people from all over the world and so their menu reflects that. Online as you check in you can pre-select the type of meal you would like to be served, with over a dozen choices. Those who pick a different meal from the standard menu are given their food by the cabin crew before they start with the rest of the cabin. As I eat my evening meal the roof of the cabin soon display constellations of stars, which is a basic installation that gives a pretty cool effect whist flying at night. 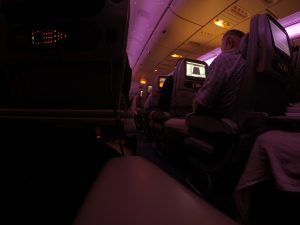 As time passed I spent a few hours standing around at the back of the aircraft chatting with people who trained alongside me but are on another course, We were able to help ourselves to baskets of fruit and chocolate, trays of sandwiches, boxes of cans that the cabin crew set out. I had a good chat with one of the pilots who was currently relieved of his duties and was resting at the back of the aircraft. Spending around 45 minutes with him I had a good chat on topics such as how the crew manage such a long route between the four of them, news in regards to what Emirates was doing in the future, the cancellation of the Panama route, and then some basic things to do with flight training. He then invited me to come up to the flight deck once we would arrive in Dubai to have a nose around and meet the rest of the crew, which I later took.

As we started to leave the Indian peninsula and headed over towards the Arabian region I consumed what would be the first of three breakfasts in the space of four hours prior to our descent into Dubai. The arrival was expected to include a delay with an airborne hold due to traffic at the airport, but luckily we were cleared straight onto the downwind leg and commence the S turn onto Runway 30L. 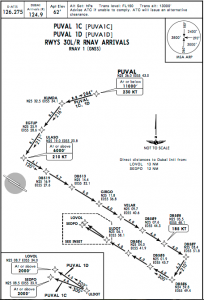 Upon arrival into Dubai we, for some reason, were given taxi instructions to the far west side of the airport on a remote stand. Once de-boarding started, which took forever waiting for the buses and stairs to be in place, I eventually made my way to the flight deck and managed to have a quick chat and the obligatory photo in the right hand seat  before being hurried down the stairs to board the last bus. Now, this bus journey was long, very long. I recall the journey time taking approximately 35 minutes to get us from the western remote stand to Concourse A. Still, standing straight for 35 minutes after sitting down for 17 hours wasn’t a big issue, especially if you’re given a basic airside tour at DXB.

The two hour connection time swiftly flew by, I met up with those who would be flying back to London with me, and ate my second breakfast, being a standard McDonalds Big Mac meal at 5am.  Boarding the 500 passengers onto the A380 didn’t take as long as expected, having to only be stood in a queue for around 5 minutes to get through the gate agent and walk down the jetway. Another full flight it would be, taking a slightly longer time for everyone to be seated and for the cabin to be secure for departure, we pushed back, taxied to 30R, waited around for a few of the aircraft ahead to depart, and by 07:45 we were climbing out over the Gulf heading over Iran. The final breakfast was served and frankly, the time didn’t go as quick as compared to the last flight. Approaching the North Sea consisted of good views of The Netherlands, with Schiphol Airport being clearly visible. Descent into London consisted of no holds at the famous Lambourne VOR, much to the joy of my course mate who I sat alongside on this flight, as we had a little wager on whether or not we would be entering the hold.

Descent over london was magnificant, a clear day allowed us to remind ourselves what a brilliant city London is, and seeing all the landmarks again really did remind us that we were finally home. The bounced landing onto 27L will stay with my for a long time, it was a heck of a plough, but of course it wasn’t spoken of while I visited the cockpit upon arrival at Terminal 3.

I have flown with Emirates before and I will continue to do so where possible. It is clear that they have the money and the infrastructure to make their airline one of the best in the world. While most flag carriers are looking into ways of cutting back money to make sure they can still sustain their long haul operations to continue to compete with the Gulf Carriers, Emirates just seems to find new and more innovative ways to improve the passenger experience on their routes, whether its diverse menu options, the next generation aircraft, and the incredibly polite staff, the airline is as gold as their sandy countryside.