On Monday, Condor Airlines launched service from Austin, Texas with new service to their hub in Frankfurt.

The History of Condor

The airline used three Vickers VC.1 Viking aircraft based at Lufthansa’s hub in Frankfurt, Germany. The 36 seat turboprop started flying on March 29, 1956. The first scheduled service flew to Egypt and the “Holy Land.” Within the same year, Majorca and the Tenerife Islands were added to the list of flights, showing the early success of the new airline.

In 1961, Condor-Luftreederei was taken over by Duetsche Flugdienst. The airline’s name was then changed to Condor Flugdienst, or Condor for short. Ten years later in 1971, Condor started expanding to offer long-haul flights, utilizing the Boeing 747. Condor would proudly become the first leisure company to fly the “Queen of the Sky.”

In the early 2000s, Condor Airlines was slowly purchased by Thomas Cook Airlines. The official transition to Thomas Cook started on March 1, 2003. By January 23, 2004, the merger was complete and Condor was officially a part of the Thomas Cook AG subsidiary.

Condor Airlines will be using one of their Boeing 767-300ER for this seasonal service, which will use flight number 2082 from Frankfurt, Germany (EDDF) to Austin, Texas (KAUS). The flight will depart Frankfurt International Airport at 2:25 PM and will land at Austin-Bergstrom International Airport at 6:45 PM, both times being local. Flight 2083, the return flight out of Austin, is scheduled to leave at 9:05 PM and land in Germany around 2:10 PM. The service will be flown only twice a week on Mondays and Thursdays. In addition, the flights will only run between June 27th, 2016 and September 1st, 2016. The flight has shown so much success early on that the airline has opened booking for next summer, and has even extended the seasonal service from May 2017 to October 2017.

Once the aircraft landed at Austin, it slowly taxied around all the construction going on around the ramp, and found its way to gate 2. As it came around the corner, it passed between two airport fire engines for the traditional inaugural water salute. After the salute was over, the captain held a Texas flag out his window, and the first officer held a German flag out her side of the aircraft.

The news conference took place shortly after the Condor 767 pulled into gate 2 at Austin Bergstrom. The conference was held between baggage carousel number 7 and the international customs exit, and opened with Patti Edwards, the Chief Operating Officer at the Austin Bergstrom International Airport. Ms. Edwards started by highlighting the fact that Austin is the first Texas city to receive Condor’s non-stop service. She also talked about the new international customs area which the Condor passengers, along with Air Canada and British Airways passengers occupy. 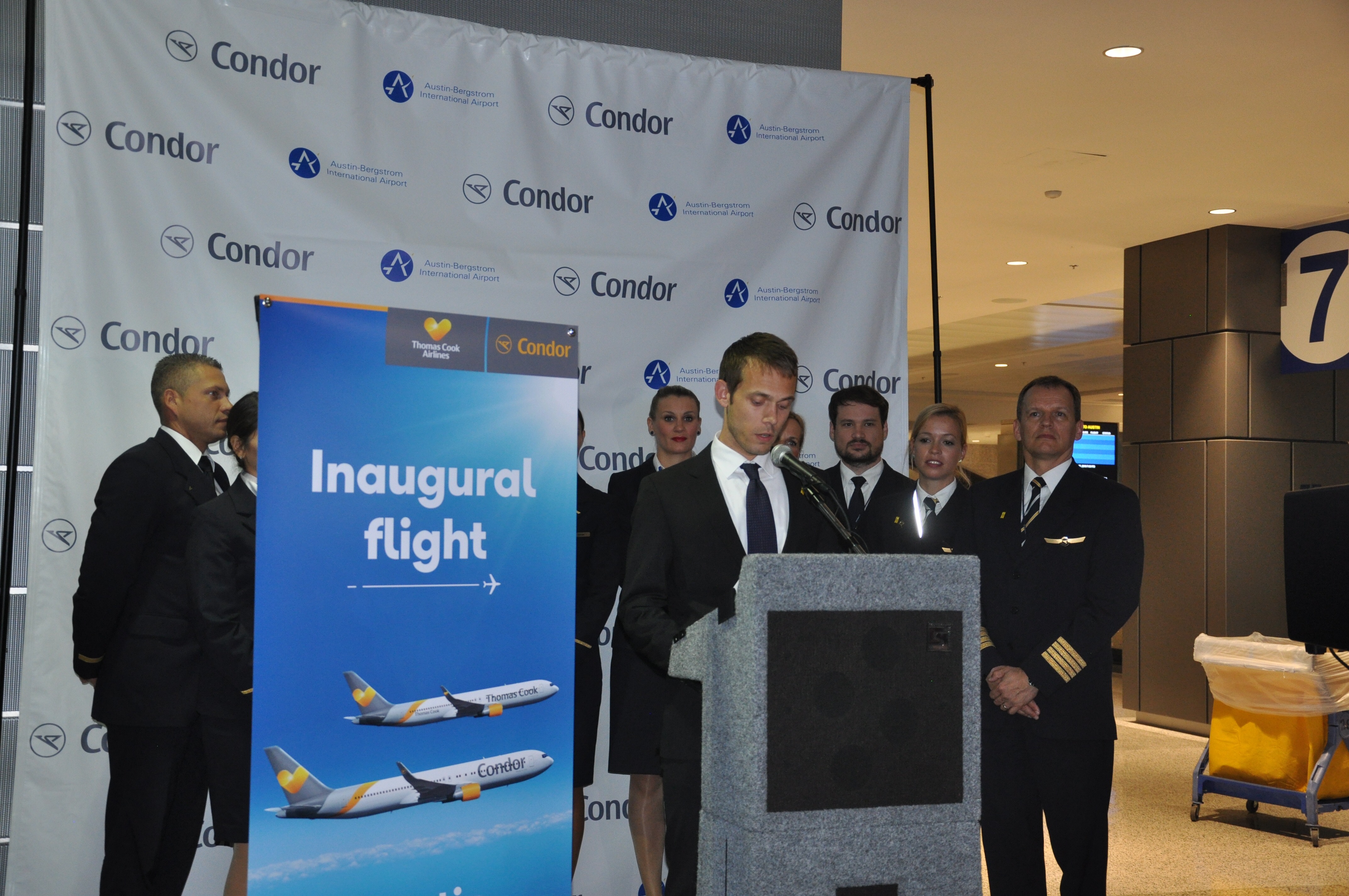 The show was then handed to Wilken Bellmann, Head of Network Development and Long Hauls at Condor Airlines. Bellmann mentioned that the flight inbound to the Live Music Capitol of the World was nearly booked and the outbound flight was even more occupied. Mr. Bellmann stated that the capacity of the flights “insures [Condor] that this flight was missing” from both Austin’s and Condor’s networks. Bellmann also noted that, through Condor’s partners, there are over 120 European destinations achievable from Austin with the connection through Frankfurt.

The gate event at Gate 2 was very exciting. However, it was a little close quarters with all the passengers waiting to board, all the press trying to get their best shots, and other passengers wandering around to check out what all the commotion was about. The Barbara-Jordan Terminal is relatively small so it would be easy to get to the gate from most of the checkpoints. Fortunately for us, the Austin Airport and the TSA closed security checkpoint 1 to all passengers and escorted members of the media through TSA PreCheck without any lines. 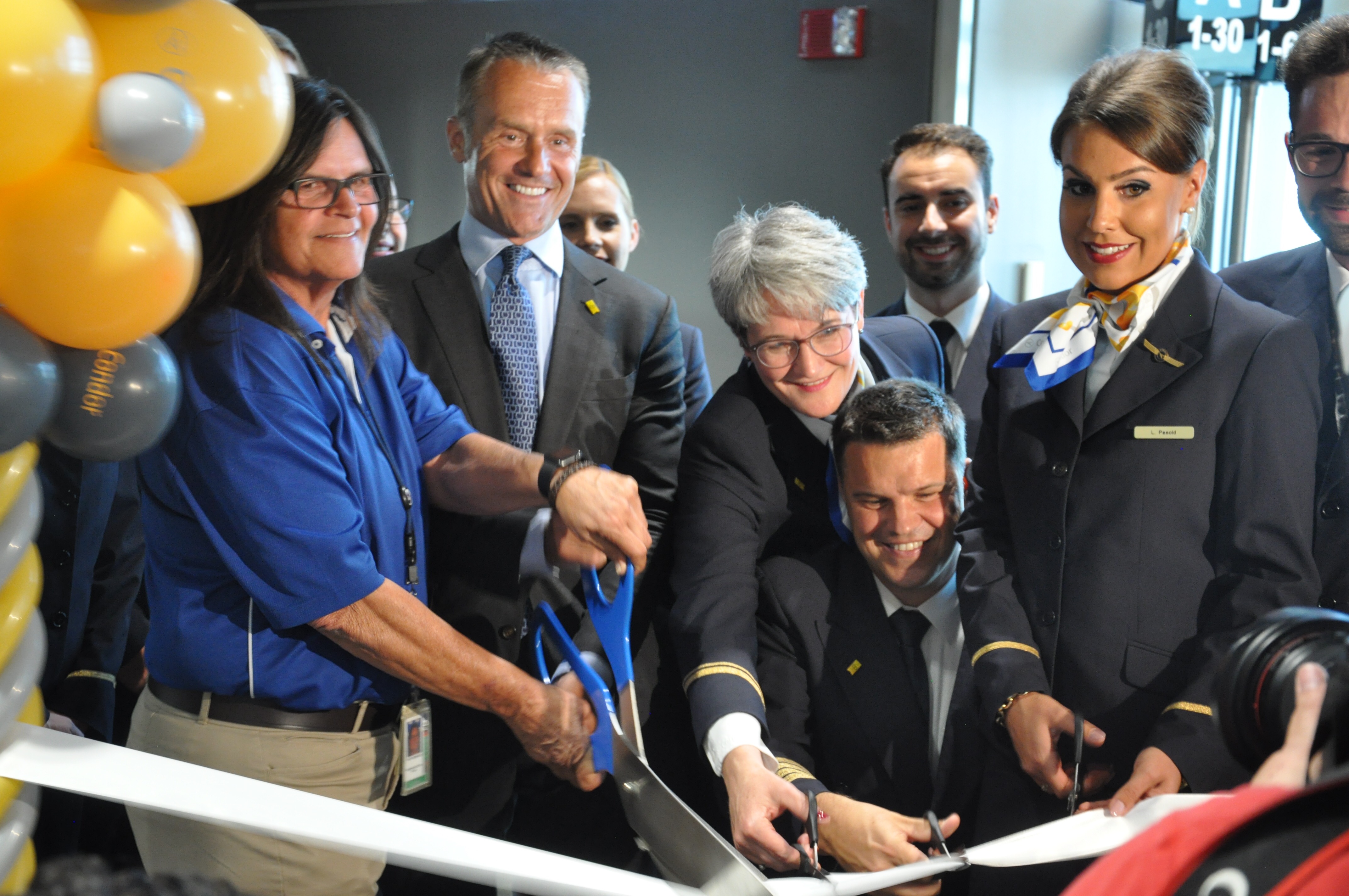 Even if you didn’t know where Gate 2 is, you could follow the sound of Uncle Simon’s Good Time Polka Band playing their native music in celebration of the return flight back to Frankfurt.

During an interview, Mr. Bellmann was asked why Condor chose Austin, Texas as its destination, he replied with multiple reasons. Some of those being unserved US markets, as well as gaps in the company’s market. He also mentioned that Austin “is a great destination and a great market place. For a new service, you need both sides to work. You need a healthy load coming from Europe, and a healthy load going to Europe and we saw that in Austin.” Bellmann stated that year round service could come to Austin but the city “needs to mature in the seasonal service before becoming a year round service.” He also mentioned that the airline is happy with serving Austin as their only Texas city, seeing that Houston and Dallas already have routes to Germany on other carriers.

The event kicked off once again with a speech by Patti Edwards. In her second speech, she mentioned the expansion of the airport to comply with its need for gates that can handle international flights. Edwards then handed the podium over to one of the pilots on the outbound flight, Captain Oliver Glaser. Captain Glaser mentioned that Condor mainly carries out leisure flights, stating that the airline “usually goes where the German’s like to spend their holiday.” He also mentioned that Austin is only the 14th US destination that Condor serves.

The captain then passed the microphone to Titus Johnson, the Vice-President of Sales of North America and the Caribbean. Johnson extended multiple thanks on behalf of Condor Airlines. He mentioned that the airline promises to be the “best value on the market” meaning “a mix of low fairs but good service.” Johnson also reiterated the fact the Condor is committed to Austin as they have doubled their capacity.
As for the flight, service to Germany from Austin is well deserved. The city of Austin is growing beyond imagination which means our airport is too. It seems like Austin Bergstrom Airport is continually breaking monthly passenger records.

I want to give thanks to Yannick and Matthias from Condor, Jason and Jessica from ABIA, my photographer Danielle Beaudin, and AirlineGeeks administrator Malick Mercier for all of their help in making this opportunity happen.

Qantas and Japan Airlines have suffered a setback as the Australian Competition and Consumer Commission (ACCC), the country’s competition watchdog,…

On Sep. 2, the District Tourism Institute of Bogotá, ProColombia, the concessionaire of Bogotá's El Dorado International Airport OPAIN, and…