Delta Air Lines on Thursday released a first look into their new premium economy cabin, which will debut in late 2017 on select international flights. The new product, which Delta has branded as Delta Premium, is the second new cabin that they have announced this year, the other being their new Delta One business class suite. The airline said this product is yet another in a long line of onboard enhancements to improve the customer experience.

“Through additional space, elevated service and distinguished amenities provided by partnerships with brands focused on design and quality, Delta is bringing the ‘premium’ back to the premium economy experience,” the airline said in a news release. 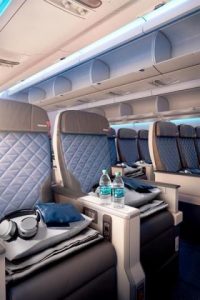 The seats will include 38 inches of pitch, up to 19 inches of width, and seven inches of recline, on top of adjustable head and leg rests. The product will also come standard with a TUMI amenity kit and an improved meal service. Also included with the seat will be a 13.3-inch entertainment screen, which Delta touts as one of the largest in its class. Outside the aircraft, customers will be able to look forward to faster check-in, security, and boarding on the front end of their trip and expedited baggage service on the backend.

The product will debut on Delta’s Airbus A350XWBs. The airplanes will feature 32 Delta One suites, 48 Delta Premium seats, and 226 main cabin seats. A 360-degree rendering of the product on the airline’s website shows the product in a 2-4-2 configuration, though the specific aircraft type is not mentioned. Additionally, the rendering shows five rows of the new cabin in between business class and a main cabin that appears to be in a 3-3-3 configuration which is standard on the A350-900. The airline also announced Delta Premium will be added to their 777 fleet beginning in early 2018.

Delta is now the second U.S. airline to announce a premium economy product, with the first being American Airlines. American announced their premium economy product in December 2015. Their product first took flight a couple months ago onboard their new Boeing 787-9 aircraft. The two airlines’ products contain a quite a few similarities, however. 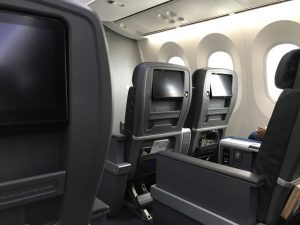 As expected, both will come standard with improved service when flown internationally, and both seats have head and leg rests that are similar in appearance. In addition, both come standard with 38 inches of pitch and a bigger entertainment monitor, though American did not publish the exact size of their screens.

At that time, American was aligning its classes of service with their codeshare partners, including British Airways, Qantas, and Cathay Pacific. With this move, Delta is using a similar tactic as Air France and China Southern are among multiple airlines in the SkyTeam alliance with a premium economy product.

This leaves United as the only “big three” U.S. carriers that has not at least announced a premium economy product. Though the airline has said they intend to increase the number of Economy Plus seats, which, on United, are exactly the same as the regular economy seats with extra legroom.

Earlier this year, United announced their new business class product Polaris. While there is a possibility that they are looking to wait longer between announcements to launch a new product, they will be taking delivery of their new 777-300ER very shortly, and they will be well on the late end if they wish to debut a second new product on the aircraft. The airline, however, is slated to begin receiving not only their first 787-10, but also their first A350 in 2018, so it remains a possibility that they will roll out premium economy on these aircraft. Despite that chance, it remains to be seen what the Star Alliance member will do about premium economy, and as of now it seems waiting is the only option for anxious fliers.

Hawaiian Airlines, on the other hand, is not considered one of the legacy carriers in the U.S. Though it may not be expected based on much of their outside perception, Hawaiian has a more “spruced-up” version of United’s Economy Plus or American’s Main Cabin Extra. Though the seats themselves are no different than their regular seats with a little extra legroom, Hawaiian’s Extra Comfort class comes with priority check-in, security screening, and boarding, as well as what the airline’s website calls a “Comfort Kit” and a pillow and blanket on international flights. Even though Hawaiian has not announced any plans for a true premium economy product, they have for the time being found a way to distinguish themselves from at least United by way of their improved Extra Comfort.

To Sum It All Up

The larger U.S.- based carriers continue to introduce new and better products, and the recent premium economy introductions represent a large part of this trend. It is likely United will announce a new premium economy product in the next couple years, as in the past the “big three” tend to mimic each other in some cases. On top of that, as the big players in the industry continue to improve upon their competition, it is likely more products like Delta’s will come to fruition.