The Air France 787 will start its career with four welcome flights over France on the 7th and the 8th of January 2017. It will then begin its commercial operations from Jan. 9, 2017 between Paris (CDG) and Cairo, with tickets on sale since September 2016.

The Dreamliner will also fly between Paris and London Heathrow to optimize its overall use between Cairo trips. This will serve to round off the training of the pilots and the cabin crew on the aircraft but also to make it discoverable to new customers within Europe. 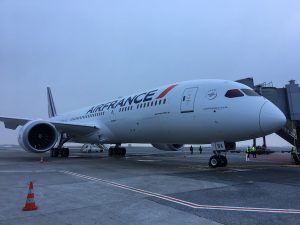 The 787 Dreamliner on the ground in Paris (Photo: Air France)

In May 2017, Air France will welcome its second Dreamliner which is set to fly from Paris (CDG) to Montreal. In addition, the airline is also considering using the second aircraft between its transatlantic shifts, to fly between the two French cities of Paris-CDG and Lyon, which will be one of the shortest route in which a 787 is regularly operating at 400 km (250 miles).

Air France found these domestic rotations as a good way to both train its pilots and also to make very efficient use of the new aircraft when it is not flying to its usual destinations.

The Dreamliner Replaces Airbus’ A340, Which is Leaving The Air France Fleet 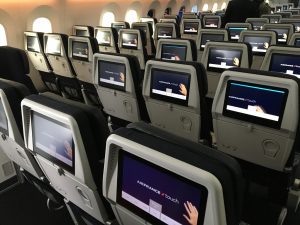 The new Air France 787-9 can carry up to 294 passengers that are divided into 3 cabins: Affaires (Business) with 30 seats, 21 premium economy seats, and 225 seats in economy. The Air France 787 is designed with their new cabin on long-haul flights called “Best and Beyond.” Onboard WiFi is proposed with a price range from 5 to 30 euros for 20MB to 200MB use.

Introduced by Air France in 2009, the Premium Economy cabin has joined the carrier’s aircraft on long-haul routes with the new Dreamliner offering an opportunity for Air France to rejuvenate the cabin.

The French company has decided to keep what makes this cabin mainly different from economy: a shell seat. Its recline is 130 degrees and it offers one of the largest widths in the sky at 51 cm (20 inches). The length between two seats is 102 cm (40 inches).

Air France and KLM Will Be Working On The 787 Together

Inside Air France – KLM group, the Dreamliner was one of the first projects managed by the two companies simultaneously.

Watch the Air France pilot training program for the 787 here:

For the 787 maintenance, AFI KLM E&M has developed a maintenance capability for the GEnx-1B powerplant, making it the first MRO present in this market, excluding the engine manufacturer. An initial customer has already signed up to work with AFI KLM E&M being Xiamen Airlines in China. AFI KLM E&M has extensive experience in Boeing 787 maintenance and since 2012 has carried out the 787 component support for twelve customer airlines.