Learning to Fly a Seaplane: A Personal Reflection Part 2

In the world of aviation, enthusiasts are often seen discussing aircraft that land on concrete runways rather than those that land over water. However, living in a state that has a large coastline, as well as needing to obtain my rating for my job, I wanted to share my story highlighting the process and experience of learning to fly a seaplane. This is part two of the experience, to read part one click here.

After takeoff, my instructor and I turned left towards the many lakes that dot the landscape. We flew over a large lake east of the Winter Haven and set up to do the pattern around it. Amazingly in the pattern we only flew about 500 feet above the ground. As we set up on our base, we turned on to our final approach. He had me mimic the controls as he brought us into a gentle landing on the water.

Now, it would be my turn to take the controls. We had landed almost in the middle of the large lake and there was more than enough room to take off again. Gently applying back pressure, I slowly eased the throttle up. I felt the initial lift up, and eased my back pressure. Then the nose settled down and I was on the step.

After a few seconds, the plane naturally took off into the air. While on the step, the only control inputs I was making was to stay on the step. This normally meant applying light back pressure to stay up and avoid porpoising. We made a rectangular pattern and I soon made my first landing on the water. 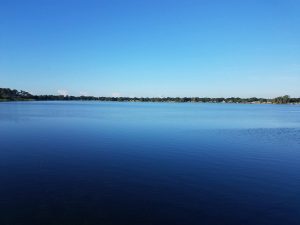 A look out to Lake Jessie where flight training would be held (Photo: Daniel Morley | AirlineGeeks.com)

Meanwhile, landing on the water is similar to landing on land. The main difference is that it can be more difficult to judge when you are in the water. After touching down, I pulled the stick full aft to help slow us down, as the lack of braking requires a full aft stick to help come to a stop.

After practicing the rough water takeoff and landing a few times, we moved on to a new lake and a new maneuver, which would prove to be the most challenging. When the water is really smooth, glass like, it provides the greatest challenge to seaplane pilots for both takeoff and landing.

On takeoff, the smooth water can cause the floats to become stuck to the water, as the waves aren’t breaking the surface tension. Combined with the light to no winds that creates a smooth surface, this can cause an extended takeoff run. Unless properly corrected for, the plane may not be able to take off.

On landing, the lack of waves can challenge a pilot’s depth perception. It becomes very difficult to judge how high the aircraft is above the water. To counter these problems, seaplane pilots have consistent practice with glassy takeoff and landings. On takeoff, the strategy is to get the right float out of the water first before flying the left float out. When landing, the pilot essentially flies the plane into the water.

When setting up for landing, the pilot chooses a last visual reference on the shore of the lake. Once the plane crosses this point on the final approach, the pilot will level off into the step attitude and add some power. The plane will continue to descend and eventually touch down in the water. It is important to maintain power and attitude for the landing to avoid swamping the aircraft.

After spending the morning lake hopping and practicing the takeoff and landings, we headed back to Lake Jessie. We taxied on to the ramp, ran through a quick debrief, and headed to the Fixed-Base Operator (FBO) at Winter Haven for lunch.