Before it became one of the busiest airports in the U.S., Los Angeles International Airport (LAX) started out as a small dirt landing strip void of the central terminal buildings and paparazzi that most are so used to seeing today. Most intercity travel in 1930s Los Angeles started and ended at the then newly-built Union Station in Downtown LA, and LAX only started having commercial flights during the late 1940s.

It was only during the early 1960s and the arrival of modern jets that today’s LAX terminals started taking shape to welcome the Jet Age.

The City of Los Angeles chose architecture firm, Pereira & Luckman, to design the airport’s series of terminals and parking structures in 1958. The original plan was to have the satellite terminal buildings surround a huge, glass and steel dome, where all passengers would arrive at to complete check-in. After completing check-in, passengers would then go to their respective airline terminal via underground passenger channels.

However, this plan was never realized due to exorbitant costs, and instead, the city built the illustrious Theme Building in 1961 on the site intended for the central ticketing dome. The Theme Building served as an airport observatory and restaurant for decades and is mostly a vacant landmark today.

Abandoning those plans, the city still chose to keep the satellite terminals and build them out in the middle of the airfield. These satellites would be built in the shape of rotundas and would be reached by underground passenger channels from the individual ticketing halls.

With this plan moving forward, today’s Terminal 7 and 8 were first to open in 1961, followed by Terminal 3, 4, and then 5. Terminal 2 (the former terminal for international airlines until the 1984 Olympics) would open a few months later, and finally, Terminal 6 would be the final terminal building to open until 1982.

Each terminal had its own tunnel (about 400 ft. in length) reaching from the ticketing area to the satellite gate area. Passengers would need to descend underground and come out the other side to reach their plane – and there was no other way around it. Two stainless steel escalators would lift passengers out of the underground portal, and passengers would then find themselves in the central rotunda of the satellite.

And in order to make that long walk easier for travelers (without rolling suitcase back then), LAX became one of the first airports in the world to install moving walkways in the underground tunnels to make the underground trek easier for passengers. These moving walkways installed in the early 1960s were first coined as “Astroways” and Lucille Ball became the first passenger to demonstrate their usefulness. 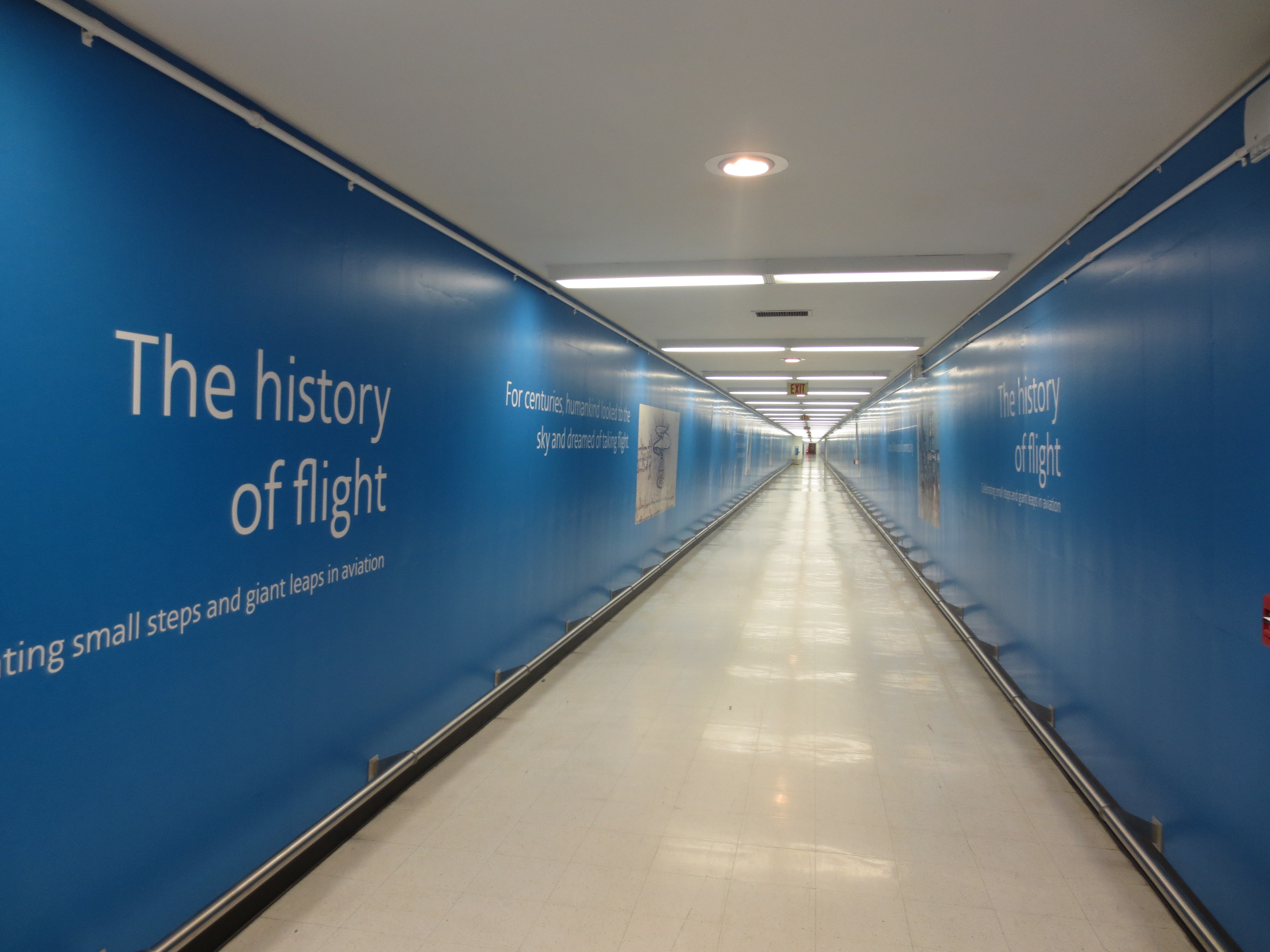 The piece which still remains intact today and was a sight to behold for arriving and departing passengers. It was called “The Astro Walk” by people back in the day. These mosaic tiles were symbolic of the wide and colorful spectrum of the U.S. from the East to the West Coast.

The blue tiles at the entrance represent the West Coast’s Pacific Ocean; the subsequent browns, yellows, and oranges represent the Rockies and the Southwestern U.S.; and the green and gray sections represent the Midwest and East Coast.

This was a time before modern technology and lighting created the beautiful tunnels you see today at Detroit’s McNamara Terminal and O’Hare Terminal 1, and served as eye candy at the time. As time passed, the tiles eventually lost their significance and became forgotten. They have only been re-glorified today by Mad Men tapings and Instagram. 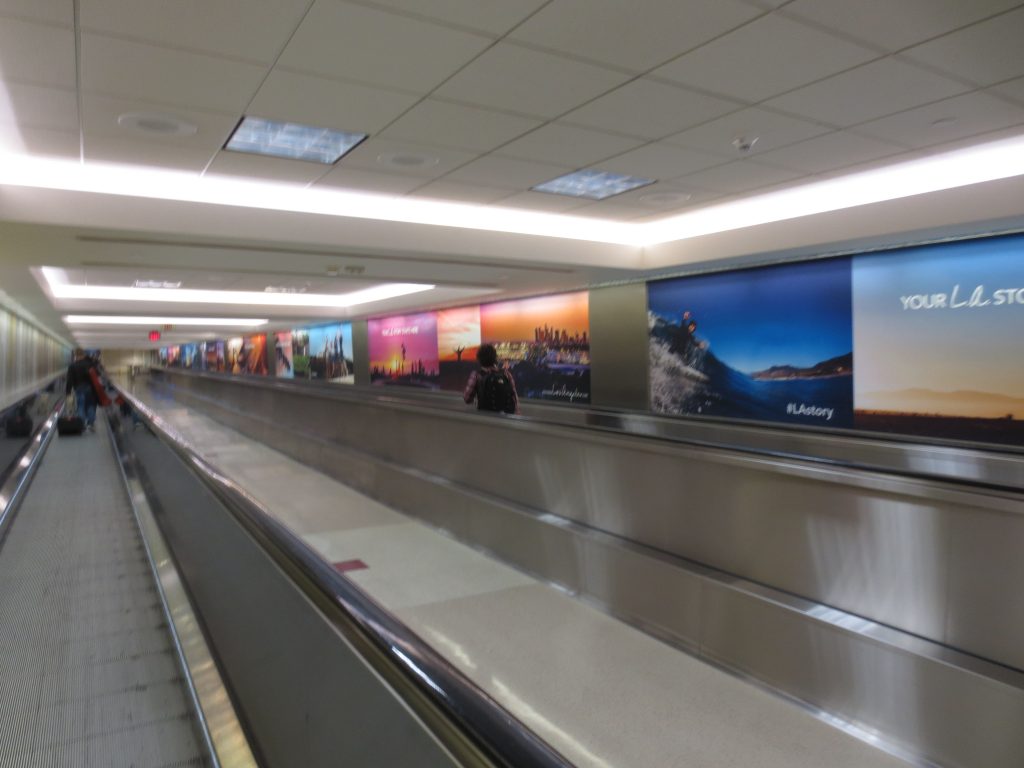 The tunnels were heavily used until 1981 when the City finally decided to build connector buildings between the ticketing areas and the satellite building – creating the “pier” layout that you see at the airport today.

The connector building added more floor space and gate slots, but it made the tunnels obsolete. Because the ticketing hall tunnels were no longer needed, the airport sealed off most of them. The ones that remained open were almost unused and forgotten.

After 9/11, the inter-terminal tunnels were completely sealed off and used as storage. Passengers arriving at one terminal and changing to a different terminal would now have to exit the terminal and go through TSA again to re-enter another terminal. It wasn’t until 2014 that the city realized the potential usefulness of these tunnels for connecting passengers that these tunnels were opened up again.

Today, Terminals 3, 4, 5, 6, 7, and 8 still possess the former underground tunnels that linked the ticketing halls to their satellite rotundas. Terminals 4, 5, and 6 are now linked through the same inter-terminal tunnels that existed back then. Terminals 6, 7, and 8 are connected above ground. The original Terminal 2, however, was completely torn down and rebuilt for the ‘84 Olympics, and therefore doesn’t have a tunnel.

Today, the tunnels are mostly used by arriving passengers who choose to forego the more crowded above-ground route. During the busy season and when TSA lines become too long, it is also used as an overflow passageway for departing passengers. The inter-terminal tunnels are also sometimes used by American Airlines (based in Terminal 4), which on occasion needs to use Terminals 5 due to gate slots being filled. 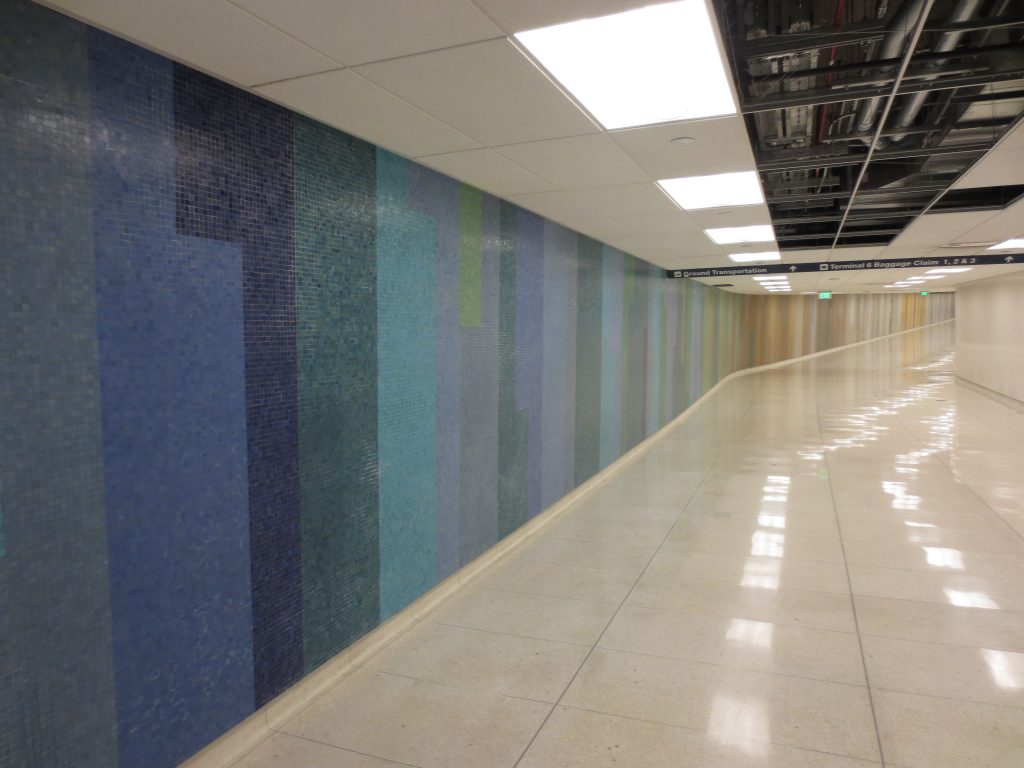 Otherwise, these tunnels are not that busy with passenger activity. The inter-terminal tunnels are pretty quiet most of the day because not that many passengers know about them or choose to use them.

The Tom Bradley International Terminal (TBIT) completed in 1984 was the last terminal to have an underground channel built for passenger use. Its purpose, unlike the tunnels built in the 1960s, was, however, to connect arriving international passengers to U.S. Customs and baggage claim. With the opening of the new TBIT in 2013, the underground channels were closed and torn down along with the old TBIT.

Today, LAX is building a series of modern inter-terminal connectors above ground to make the move across terminals easier for connecting passengers. Currently, connecting passengers have to exit the terminal and either walk or take a connecting shuttle bus to reach flights departing from Terminals 1, 2, 3, and TBIT. These terminals are not connected airside.

A multi-level glass facility connecting TBIT with American Airlines’ Terminal 4 was recently completed in 2016, and very soon TBIT will be linked with Delta’s Terminal 2 and 3, and Southwest’s Terminal 1. Because the inter-terminal tunnels from the 1960s are still intact, it will soon be possible to walk from Terminal 1 all the way around the Central Terminal Area to Terminal 8.

Come 2019, LAX will have a new satellite concourse west of TBIT, which will expand LAX’s international flight capacity. It is almost reminiscent of the former satellites that used to stand alone in the 1960s. The city has decided to forgo the people mover to link TBIT to this new satellite. This satellite will be linked by tunnel — albeit, a much more modern one.