Boeing’s 737 MAX 7 lifts off for the first time. EASA says the aircraft family could be approved for European operation by the end of 2020. (Photo: AirlineGeeks | Chuyi Chuang)

The smallest variant of Boeing’s 737 MAX family, the 737 MAX 7, earned its wings on Friday as it successfully took to the skies for the first time. The newest MAX aircraft departed Renton Field at 10:17 a.m. and was the focus of countless enthusiasts and members of the press gathered at the airport to see the historic first flight for the aircraft piloted by Captain Jim Webb, who was just promoted to the 737 model’s chief pilot, and Keith Otsuka, both from Boeing’s Test and Evaluation department.

Flying high over the skies of Washington State for the next few hours, the aircraft performed routine tests of the flight systems, controls and handling qualities.

This flight was a symbolic victory lap for Boeing, as this is the third variant out of the 4 MAX aircraft that will be produced by Boeing, and a milk run for the pilots, as the flight was nothing compared to the vigorous testing required to earn its certification. 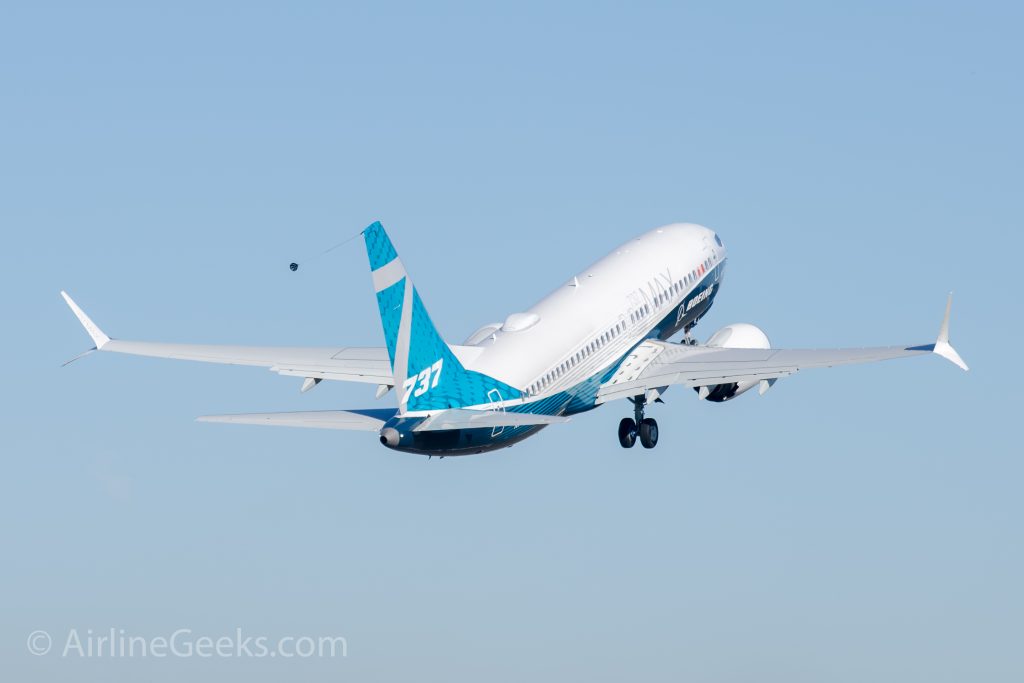 After three hours and 5 minutes of zig-zagging around the Pacific Northwest on its proving run, the aircraft, flying under the callsign “BOE1X,” flew to Boeing Field, touching down at 1:22 p.m. Although its final destination was just 5 nautical miles from its starting point, the one-way flight across town was 952 nautical miles total, flying from the Pacific Ocean all the way to the heart of Washington State and back. 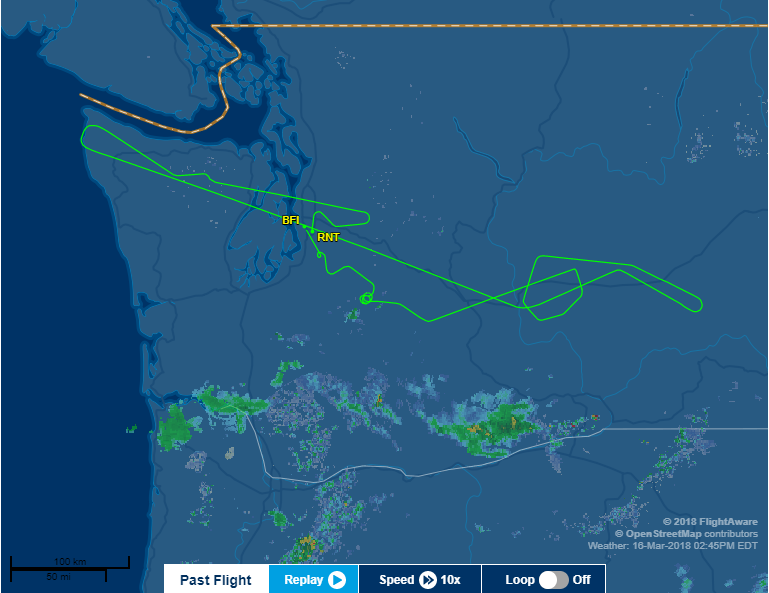 First Flight of the Boeing 737 MAX 7 over Washington. (Photo: FlightAware)

While the 737 MAX 7 was airborne on its tour of The Evergreen State, on the ground, Boeing executives seemed pleased with the aircraft’s performance on this flight as a positive sign of things to come for the youngest member of the MAX family.

“Everything we saw during today’s flight shows that the MAX 7 is performing exactly as designed,” said Keith Leverkuhn, vice president and general manager of the 737 MAX program, Boeing Commercial Airplanes. “I know our airline customers are going to enjoy the capabilities this airplane will bring to their fleets.” 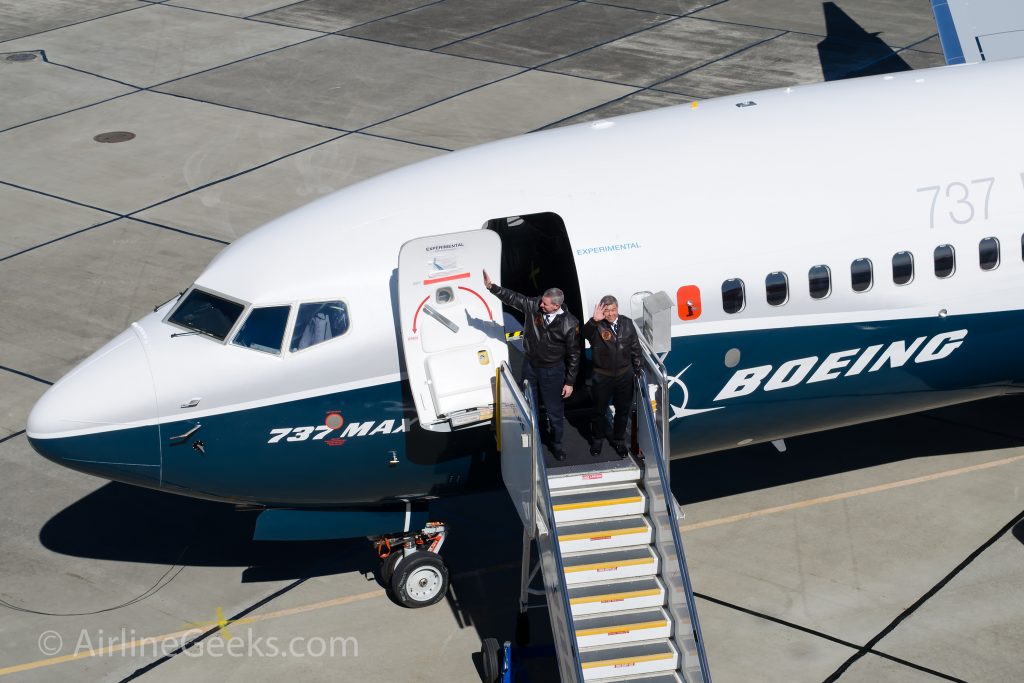 Despite its smaller size, the 737 MAX 7 can fly farther than the 737 MAX 8 or 9, with a top range of 3,850 nautical miles. Currently, the 737 MAX 8 is deployed on routes that take well-advantage of its range. However, no airline has publicly stated that they will be looking at using the 737 MAX 7 for the long-range flights, despite the airplane’s superior range. Boeing also boasts the aircraft’s ability to fly into the ‘hot and high’ airports where performance is key.

“The MAX 7 will provide airlines an efficient product for opening and flying thinner markets and accessing challenging airports, while enjoying all the benefits of being part of the 737 MAX family,” said Randy Tinseth, vice president of Marketing, Boeing Commercial Airplanes.

Boeing didn’t miss the opportunity to compare the aircraft to its counterpart, the Airbus A319neo, by mentioning the trifecta of advantages over it: capacity, range, and fuel efficiency. According to Boeing, the MAX 7 can fly 400 nautical miles farther, carry 12 additional passengers and save up to seven percent on fuel costs. In the new penny-saving world, those statistics are important for airlines looking to save on costs. 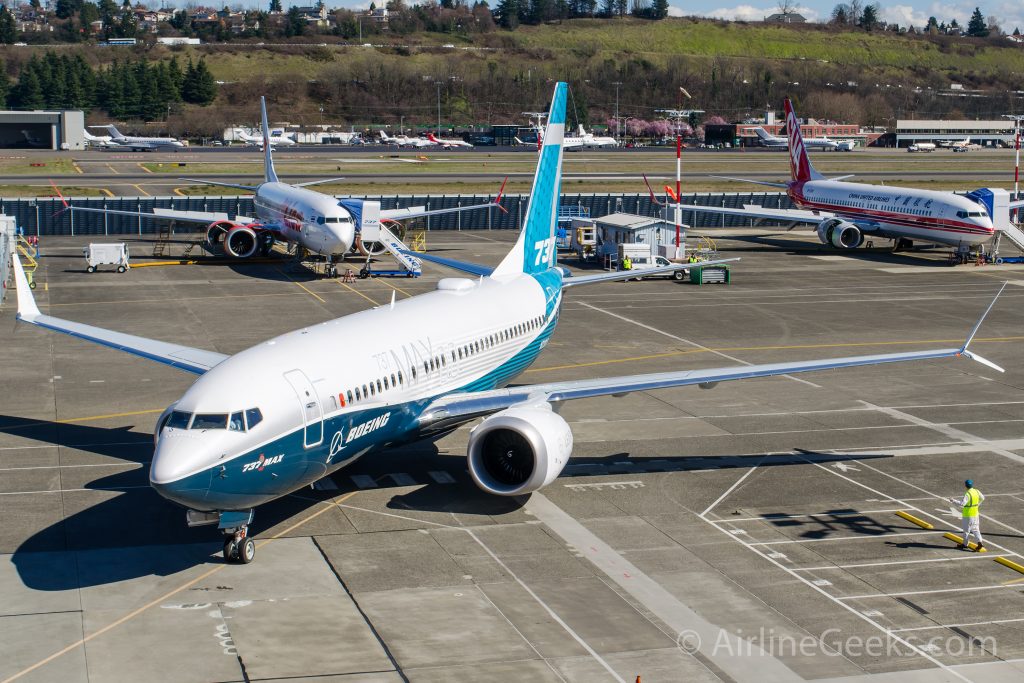 The 737 MAX 7 pulls onto the stand (Photo: AirlineGeeks | Chuyi Chuang)

The 737 MAX 7’s performance capabilities are made possible, of course, by CFM International’s LEAP-1B engines and advanced technology winglets. The 737 MAX 7 is also complete with Boeing’s Sky Interior and upgraded cockpit technology including glass displays, standard on all MAX aircraft,

While the flight and Boeing’s statement exudes confidence in the aircraft, sales figures haven’t been keeping up with Boeing’s enthusiasm. The aircraft is the least selling out of the three MAX aircraft that have taken to the skies.

Currently, only a handful of airlines have purchased the aircraft, with the total number of sales for the jet still in double digits, although the airplane may receive a boost with the completion of its first flight.