An early photo of the 747 flightline in Seattle (Photo: Boeing)

In each and every conversation about aircraft, her name comes up. And it is her name, because unavoidably, it has become the symbol of commercial aviation worldwide. Its beautiful design is without a doubt the most recognizable among scores of airplanes from all ages.

You can debate about the efficiency of modern twin-engine airliners, about how the industry stopped thinking about safety in engine numbers, about how the mindset changed from superjumbos to smaller airplanes all day long; there will always be one saying “yes, but the 747…” and that person’s argument will have nothing to do with sense, but all to do with love.

On a day like today, February 9, but in 1969, the very first Boeing 747-100 made its first flight. Born as a  military design that eventually failed to seduce the USAF, it was designed with the cabin above the main airframe anticipating a freighter future rather than a commercial gamechanger. Eventually, it would conquer both markets. 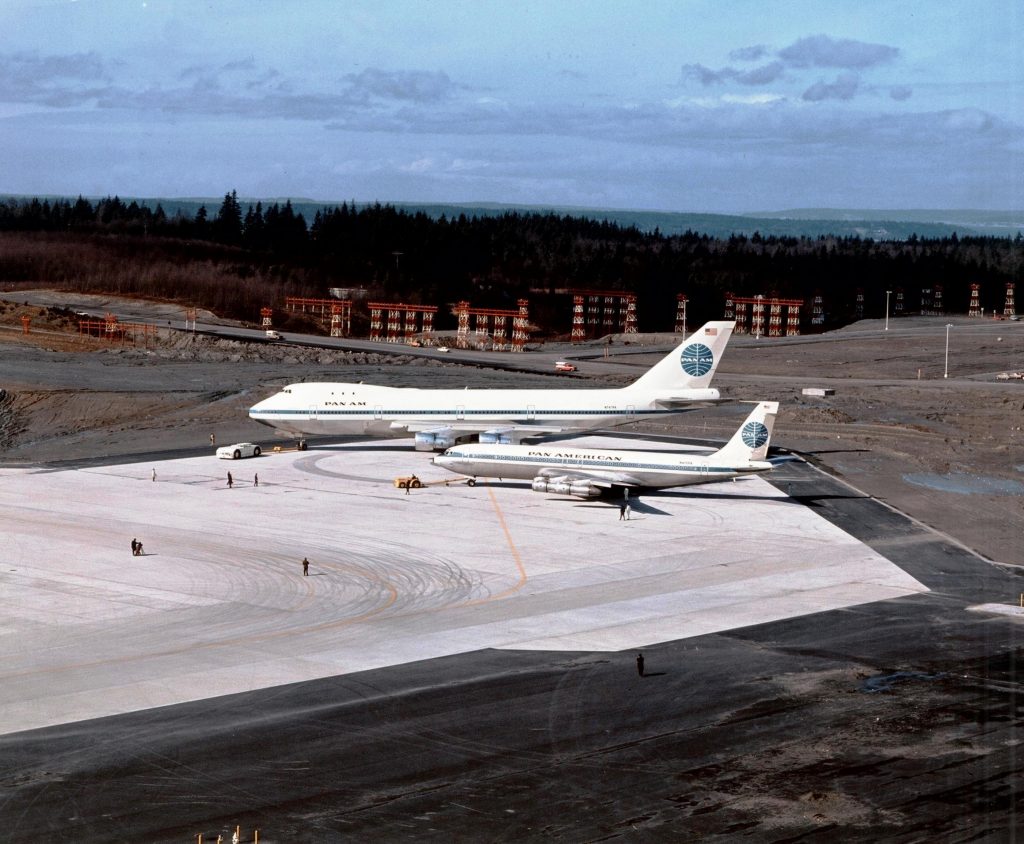 The incentive for creating the giant 747 came from reductions in airfares, a surge in air-passenger traffic and increasingly crowded skies. Following the loss of the competition for a gigantic military transport, the C-5A, Boeing set out to develop a large advanced commercial airplane to take advantage of the high-bypass engine technology developed for the C-5A. The design philosophy behind the 747 was to develop a completely new airplane, and other than the engines, the designers purposefully avoided using any hardware developed for the C-5.

But before the airplane was built, its nest needed to be constructed. The massive airplane required the construction of the 200 million-cubic-foot 747 assembly plant in Everett, Wash., the world’s largest building by volume ever built. 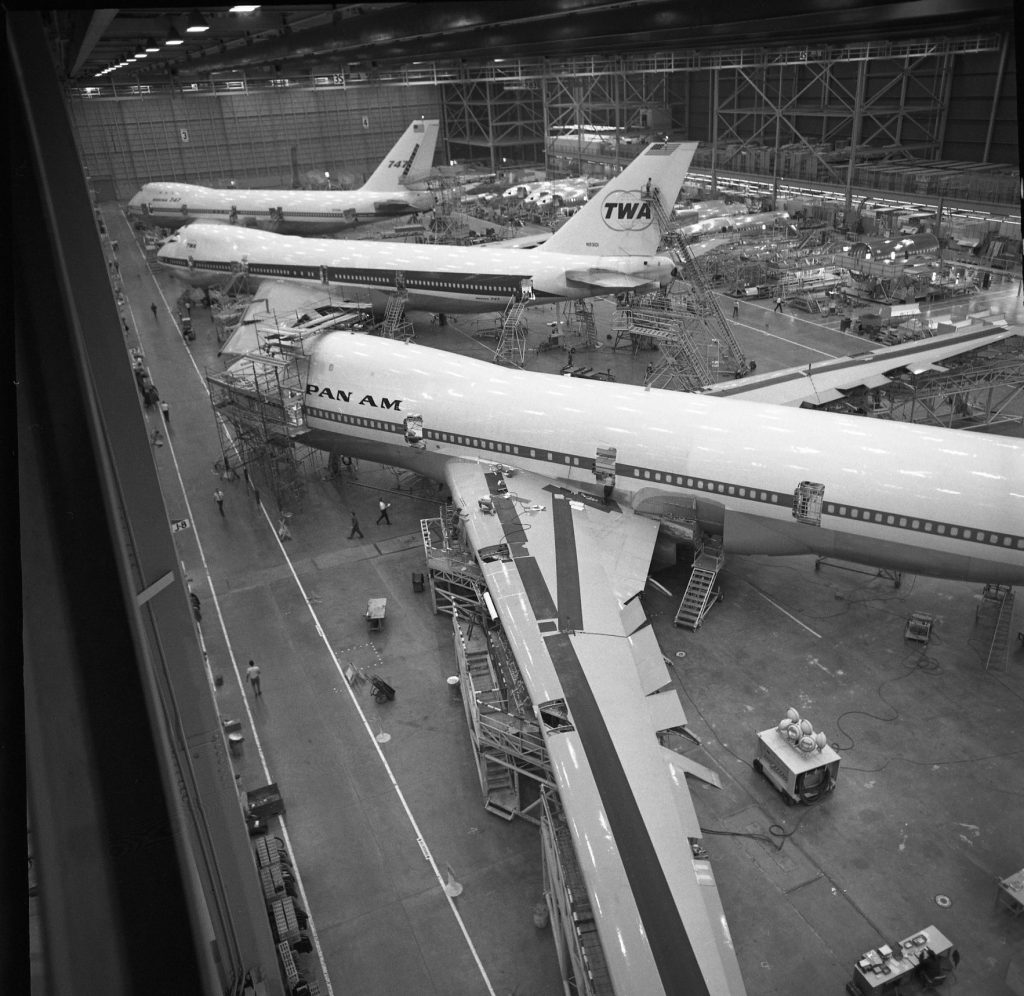 The 747’s final design was offered in three configurations: all passenger, all cargo and a convertible passenger/freighter model. The freighter and convertible models loaded 8-foot by 8-foot cargo containers through the huge hinged nose. The fuselage of the original 747 was 225 feet long; the tail as tall as a six-story building.

Pressurized, it carried a ton of air. The cargo hold had room for 3,400 pieces of baggage and could be unloaded in seven minutes. The total wing area was larger than a basketball court. Yet, the entire global navigation system weighed less than a modern laptop computer. 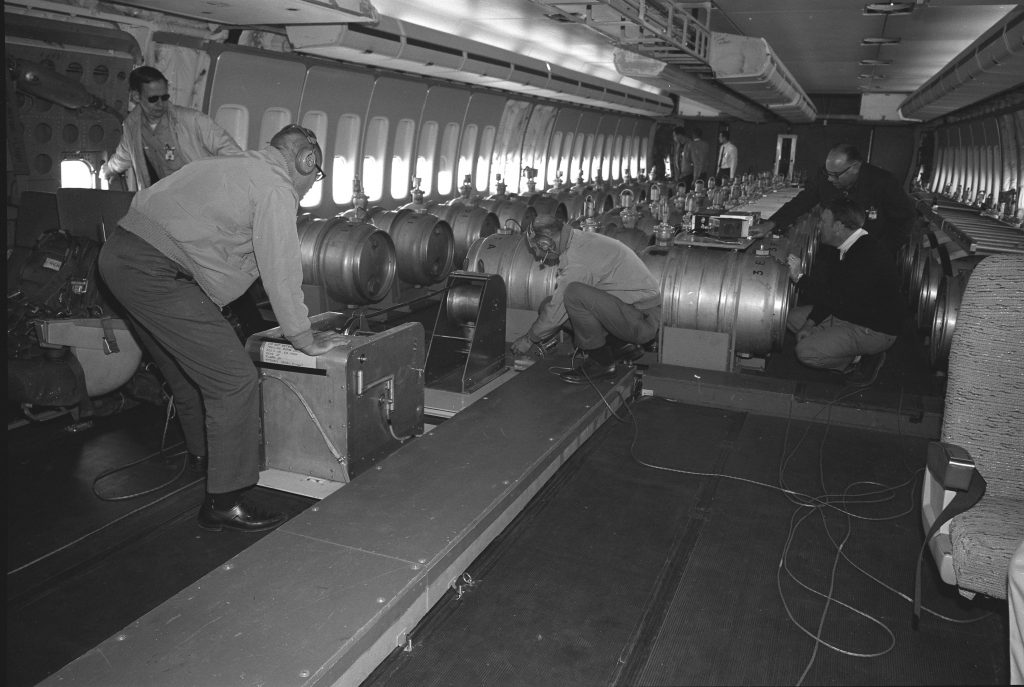 Balast tanks on one of the first 747 testbeds (Photo: Boeing)

A completely new design implied a completely new challenge for the pilots. While the first aircraft was being built, the test crew started the adaptation to an entirely different operation height. The experience of taxiing such a large plane was acquired in a contraption called “Waddell’s Wagon,” named after Jack Waddell, the company’s chief test pilot.

The pilot sat in a mockup of the 747 flight deck built atop three-story-high stilts on a moving truck. The pilot learned how to maneuver from such a height by directing the truck driver below him by radio. 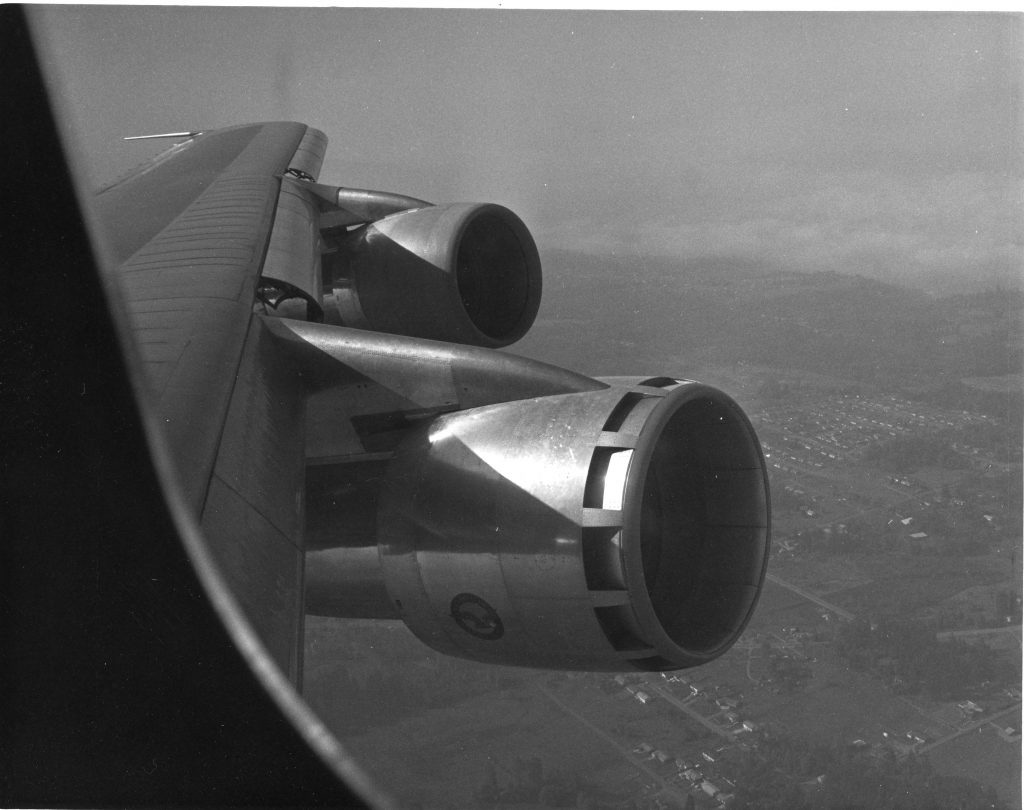 Only 16 months after the decision to build was made, the first 747-100 took its first flight. Before the Queen’s eyes, half a century of the world’s commercial aviation history changed at an incredible pace. But what was the role of the Boeing 747 in that change?

“It did not take long for the 747 to have a giant impact on air travel.  It was the must-have flagship for the world’s airlines and attracted passengers with its luxury and passenger appeal. But it was the Super Jet’s size, world-spanning range, capacity, and economy that had the greatest impact, making it possible for all of humanity to fly and with that the 747 will forever mark the point in history when any person on planet earth could fly anywhere on the globe.  By July 1970, one million passengers had flown on the 747 – the Super Jet was shrinking the world.” said Mike Lombardi, Boeing’s senior corporate historian, who AirlineGeeks had the chance to talk to earlier this week. 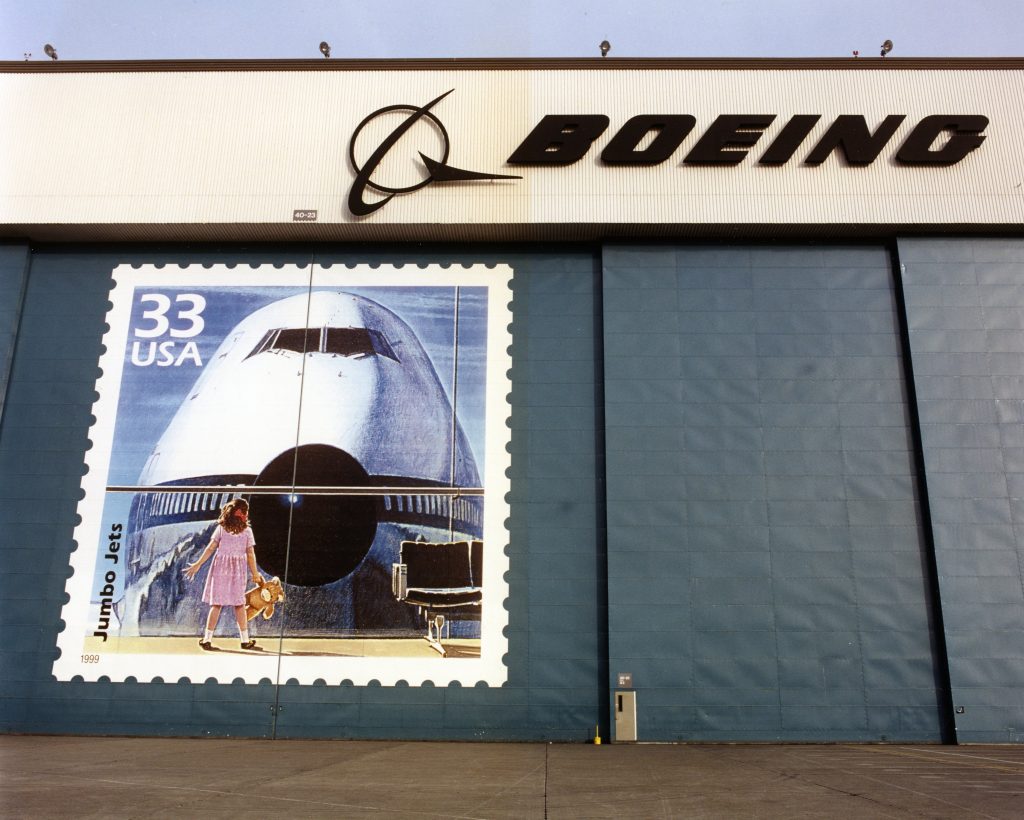 A 747 stamp on the factory doors in Everett, Wash. (Photo: Boeing)

“The 747 quickly became the icon of commercial aviation.  It was the first airplane with two aisles. Most who fly have no idea what airplane they are on, but the 747’s size and its distinctive hump make the plane readily recognizable,” he added.

We asked Mr. Lombardi about how the 747 changed Boeing itself, and he said: “The ‘Queen of the Skies’ was created by the men and women of Boeing, from brilliant engineers to highly skilled machinists using imagination, courage, hard work, dedication and above all: passion. They worked long hours to make real something that the world said could not be done. Because of that dedication, they were called ‘The Incredibles’ and their pioneering spirit and amazing accomplishment still inspires the latest generation of Boeing employees.” 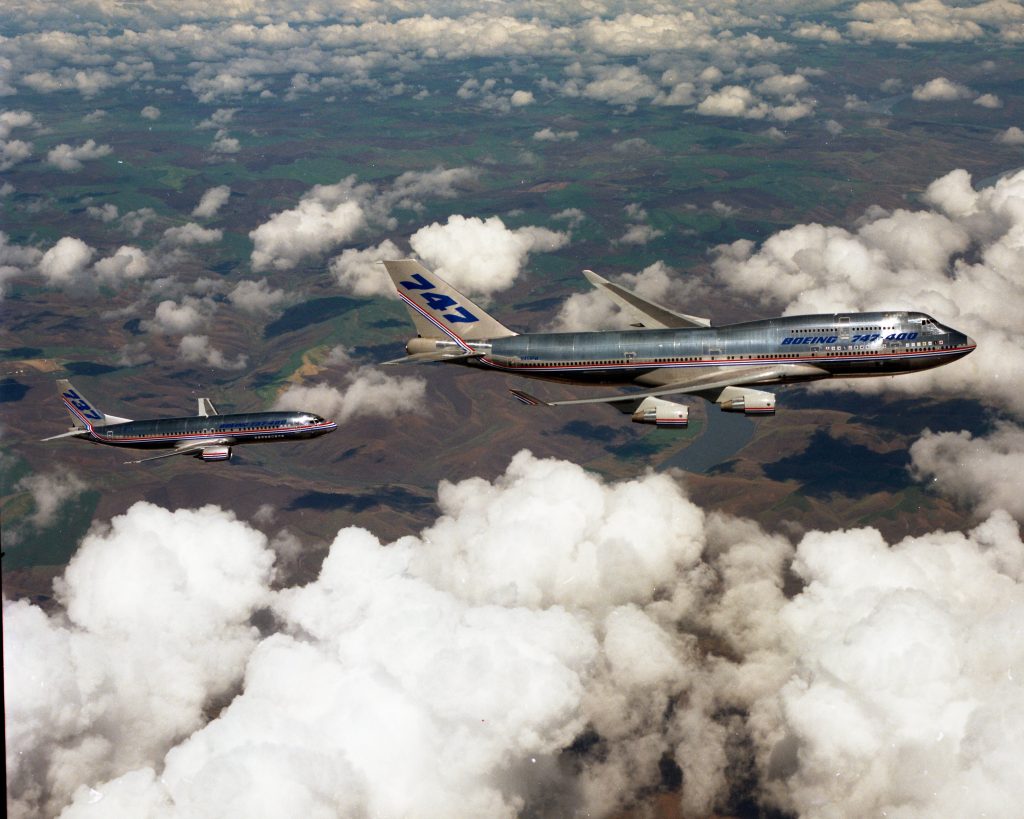 “The 747 reinforces an unshakable confidence that is common in the people of Boeing. It’s embedded in the Boeing Company DNA — the conviction that we can do those things that others think impossible,” he concluded.

The 747’s history continued with its variants: the 747-200, the Short Range, and the Special Performance. The 747-400 we still see flying commercial routes, the freighters, and the 747-8 that will be around for many years to come. That history has also been written by the special variants: the Dreamlifter, the Presidential fleet, and the Shuttle carrier.

It still holds the record of passengers transported in a single flight when an El Al 747-200 took care of 1,122 souls fleeing from Ethiopia.

In each and every conversation about aircraft, her name comes up. And that is her name because she will always be the Queen of the Skies.