Finnair celebrated its 50th anniversary of service to New York at an event at the Consul General of Finland to New York’s residence. (Photo: AirlineGeeks | Tom Pallini)

Finnair, the world’s sixth oldest airline, recently celebrated an anniversary, 50 years of flying between Helsinki and New York. The airline’s first transatlantic route, service to New York was Finnair’s first major intercontinental endeavor that would be the precursor for its transformation from a regional European airline to a global airline, connecting the world through Helsinki.

Celebrating the 50th anniversary on May 15, Finnair recreated a New York cityscape in Helsinki Airport complete with an NYC yellow cab, street performers and caricature artists. In New York, the airline hosted airline partners, frequent travelers and media at the residence of the Consul General of Finland to New York on June 6 to celebrate the occasion.

Taking a Bite of the Big Apple

The year is 1969 and the golden age of aviation is in full swing. Piston-driven propeller aircraft are quickly being replaced by larger, faster jet airliners and those operating the then-modern marvels are quickly expanding to new destinations. In Finland, the country’s flag carrier is setting its sights across the Atlantic to the United States, aiming to connect Helsinki with New York.

Finnair had entered the jet age nine years prior in 1960, operating the French Sud Aviation Caravelle on routes within Europe, but did not have an intercontinental continental presence due in part to the Caravelle’s limited range. To fulfill its transatlantic desire, a new aircraft would be required, one that could cross the Atlantic without refueling halfway while making the route profitable for the airline.

Already popular among Scandinavian carriers, the Douglas DC-8 proved to the right aircraft for the job and Finnair chose the aircraft to be the second jet aircraft type for its fleet. Boasting an extended range and valuable freight capacity, the DC-8-62CF entered service with Finnair in early 1969. Its first mission was simple, connect Helsinki to New York, and that it did with 16 first class seats and 124 economy seats. 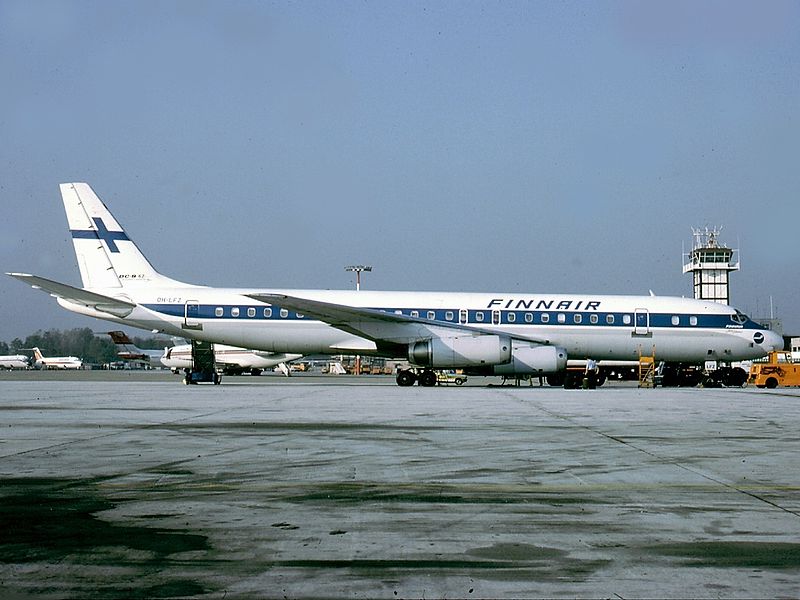 Just a few months after taking delivery of the DC-8, Finnair flew its first transatlantic flight with the DC-8 to New York via Copenhagen and Amsterdam. Though the stops were not required, as the Dash 62 variant of the DC-8 was capable of flying from Europe to the United States with fuel to spare, the additional stops helped Finnair earn extra revenue on the route by transporting freight.

The new ability to connect Helsinki and New York created an opportunity to Finnair to be the airborne ambassador of Finnish culture to the U.S. via its onboard service. To this effect, specially trained flight attendants, called “Finn Hostesses,” wearing designer uniforms served first class passengers champagne and caviar in specially designed glasses and flatware, some of which is still featured today in Finnair’s business class cabin.

While the days of champagne and caviar are long gone, one can still expect a Nordic-inspired experience onboard a Finnair flight, primarily through the catering and aircraft interiors. Finnair’s chefs routinely incorporate Nordic cuisine into the menu, most notably reindeer, and the brightness and colorfulness of the aircraft cabins invoke the feeling of being in Finland before the aircraft has even landed in Helsinki.

“When boarding the plane we feel like home and the flight itself is almost like being in the homeland,” said the Consul General of Finland to New York Manu Virtamo at an event commemorating the 50th anniversary of Helsinki-New York service.

Putting its best foot forward, the launch of the Helsinki-New York route set the standard for Finnair’s future services to America’s largest metropolis. Over the years, New York received Finnair’s newest long-haul aircraft, with the tri-engine Douglas DC-10 joining the route and then the Airbus A330. New York was also one of the first intercontinental destinations to receive Finnair’s newest flagship, the Airbus A350-900 XWB, and was Finnair’s only year-round U.S. destination for quite some time. 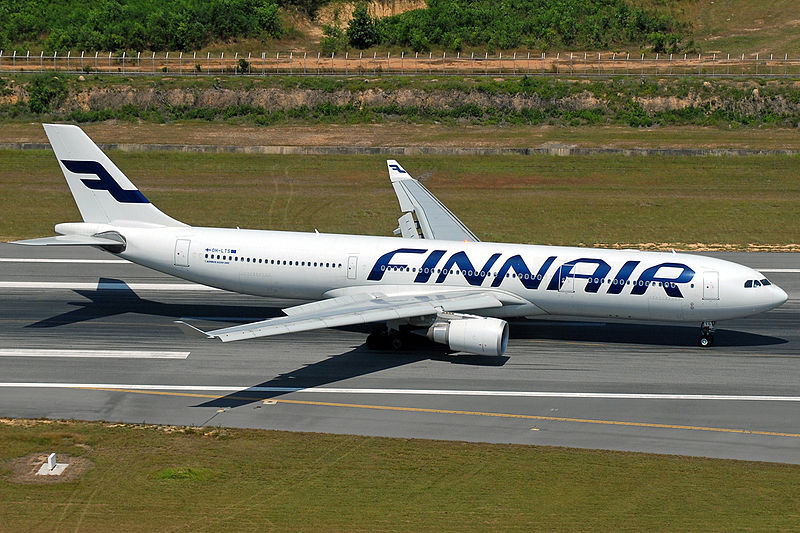 Now, New York exclusively receives Finnair’s Airbus A330-300 aircraft on its daily service from Helsinki. Finnair pilots have reported that the route is one of the most popular for the flight crews in the entirety of the Finnair route network.

Since launching the New York over 50 years ago, Finnair has since expanded to serving nine American cities at its peak with six routes remaining. Los Angeles was recently reintroduced into the Finnair route network, with the airline doubling down on California as it complements seasonal service to San Francisco which started in 2017. 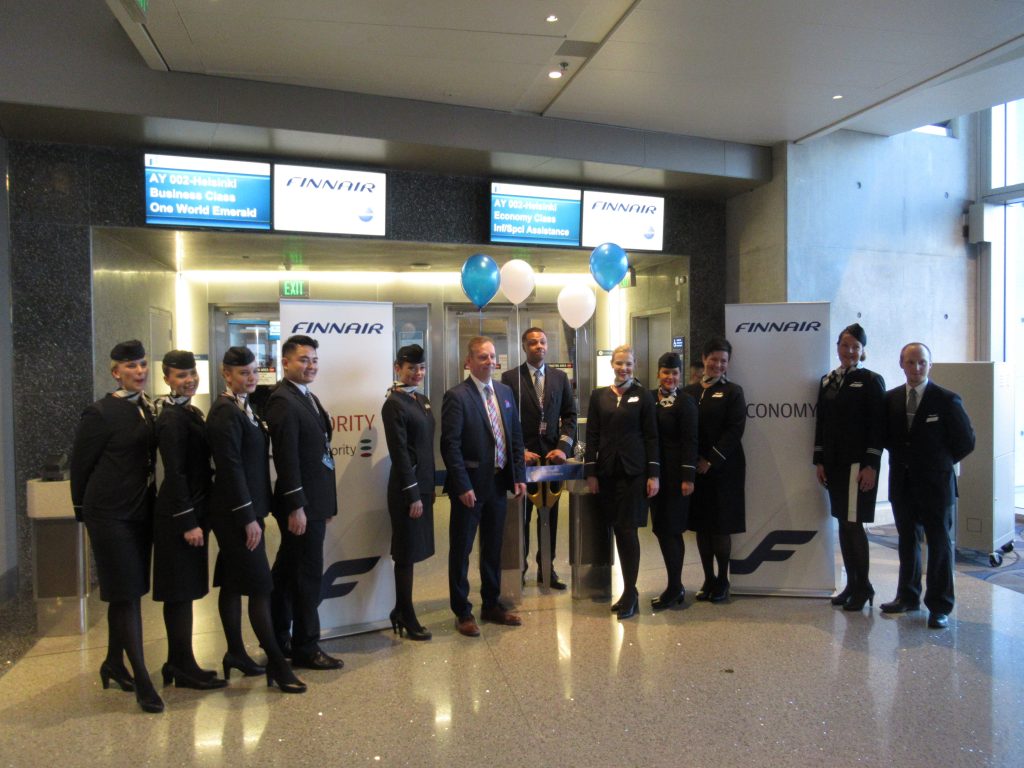 Taking a hiatus of over 25 years from Los Angeles, the airline returned triumphantly with year-round daily service. The decision to serve Los Angeles year-round as opposed to seasonal service was helped by the large cargo and business demand that the route has, according to Mikko Turtiainen, Finnair’s vice president of global sales.

“We’re extremely happy to have a daily California [service] now with Los Angeles and San Francisco, it’s the perfect combination of business and leisure,” said Turtiainen. “[The Helsinki-Los Angeles route] started off well.”

With the exception of New York and now, Los Angeles, Finnair scales back its U.S. during the winter months because of the cold weather and short days that the upper latitudes are known for during that season. However, the airline is confident that Los Angeles will have a steady stream of business travel and freight to keep the route viable even during the non-peak season. This upcoming winter will be a proving period for the route to see if the demand truly is there.

Operating year-round also helps familiarize the destination with the airline and shows dependability. While only operating during the peak season may serve a certain market segment, there’s an entirely different segment operating in the non-peak season that is now able to be reached with year-round service.

The route was given not only the designation of a flagship route with the outbound flight to Los Angeles operating as AY1, it was also given Finnair’s flagship aircraft, the A350-900XWB, an aircraft which New York has seen only temporarily. The decision, according to Turtiainen, was a mix of long-haul economics, premium cabin capacity and freight, as the A350 is more fuel efficient, has a larger business class cabin and a greater freight capacity than the A330s that serves all other U.S. destinations. 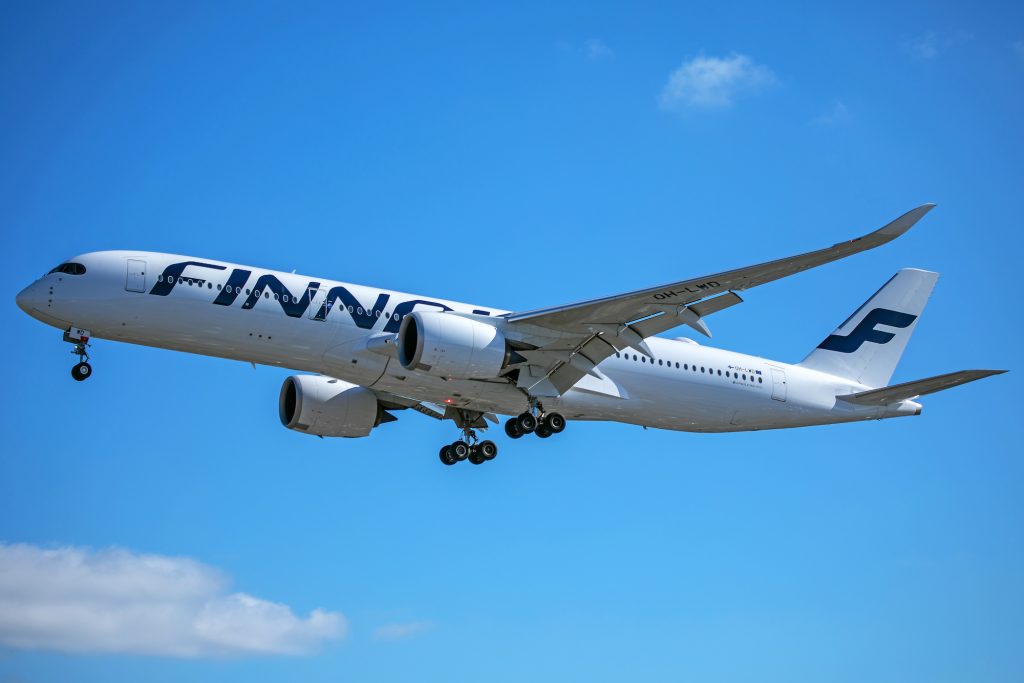 Though currently operating a two-class configuration on all of its Airbus widebodies, Finnair is planning on introducing a premium economy product expected to be unveiled in a year and a half, according to Turtiainen. While details are still scarce, Turtiainen admits that premium economy is the new standard for long-haul airlines as it offers travelers an intermediate choice between economy and business.

As the only airline providing nonstop connections between the U.S. and Finland, Finnair is also tasked with encouraging tourism to the country, which it does with its stopover program. One of the few programs in Europe, Finnair offers free stopovers in Helsinki for up to 5 days, incentivizing the northern route to Europe from the U.S.

The geographic location of Helsinki in the upper latitudes above Eastern Europe actually means the flight to Helsinki from the U.S. is shorter than comparable nonstop flights to Warsaw, Budapest and Vienna, making it an ideal stopping point to connect to Eastern European and even Near East cities. Adventurous travelers might even find themselves stopping in Helsinki on their way to Asia from the U.S., or vice versa, as Finnair has an extensive route network in the Far East.

Scandinavia’s best-kept secret, Finland has been insulated from the wave of long-haul low-cost carriers that have not yet reached its shores. Helsinki is one of the few remaining Scandinavian capitals to have no low-cost connections to the U.S., making the stopover program a valuable asset to Finnair as it increases the value of the trip without increasing the price.

Finnair’s service to New York marked not only a milestone for the airline, then in its 46th year, but also the opening of Finland to the United States as Finnair grew to be the only airline offering nonstop service between the two countries. The “via via” route, as Turtiainen called it due to its stops in Amsterdam and Copenhagen, offered New Yorkers access to the furthest reaches of Scandinavia in style and luxury and was quickly upgraded to a nonstop route in the 1970s.

A member of the oneworld airline alliance, Finnair shares Terminal 8 at JFK Airport with alliance partners such as American Airlines, Qatar Airways and Cathay Pacific.