After a delayed delivery, British Airways finally received its first Airbus A350-1000 on Saturday, the longer variant of the two A350 types available. On Monday, AirlineGeeks got to look around the new aircraft and speak to some of the people who helped to bring new features, including the Club Suite, to life. 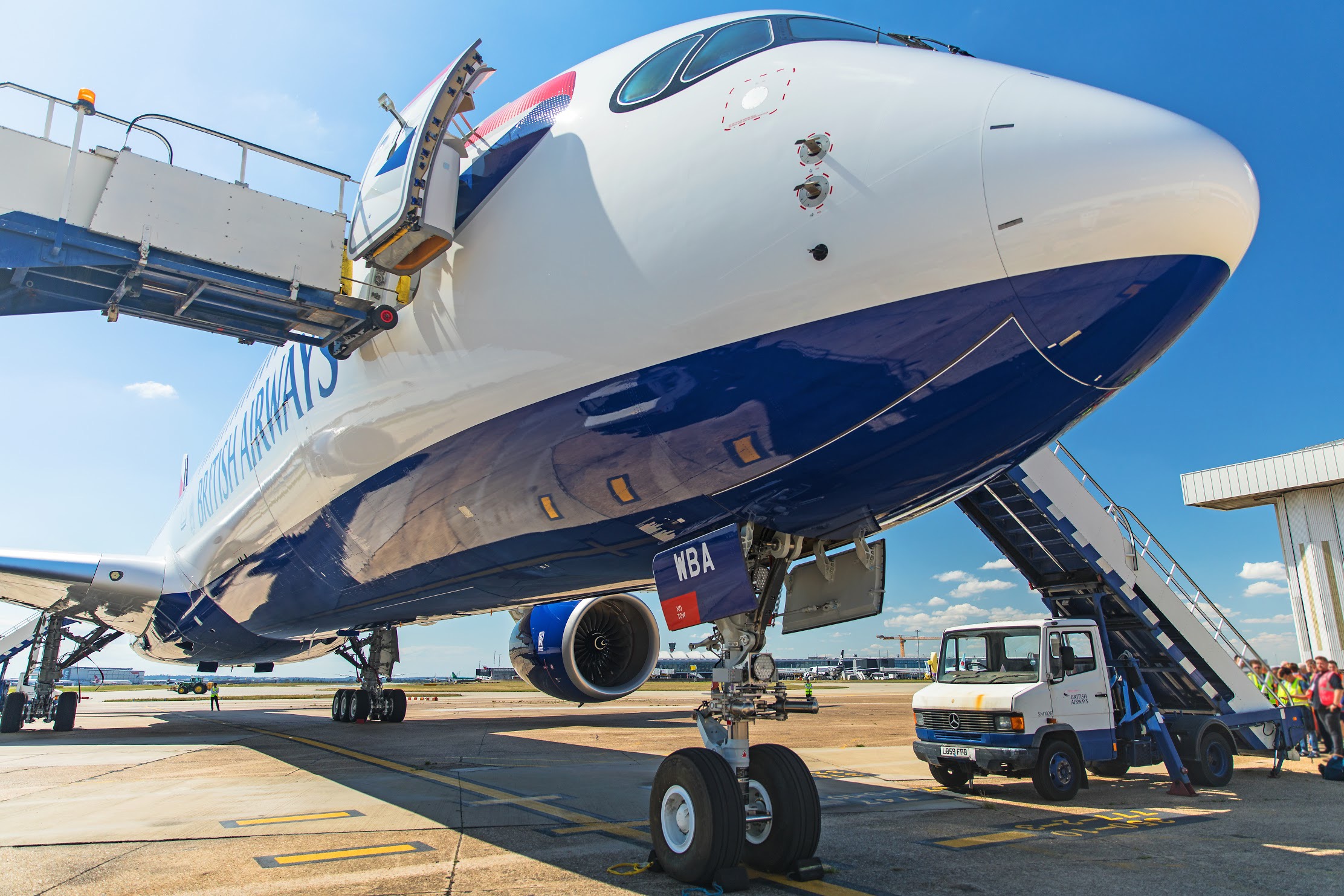 Onboard the A350, both the in-flight entertainment system and WiFi are provided by Panasonic. Last year, British Airways made changes to all their classes of service and these will be implemented on the A350. In Club World, these include new duvets and glasses.

The event which showed journalists the new aircraft started with an interesting immersive experience, where lasers sketched an outline of the A350 and the new Club Suite, as well as some facts about the aircraft. This was done to the tune of the British Airways Staff Orchestra’s rendition of Aria, a track used in 1980s adverts by the airline. 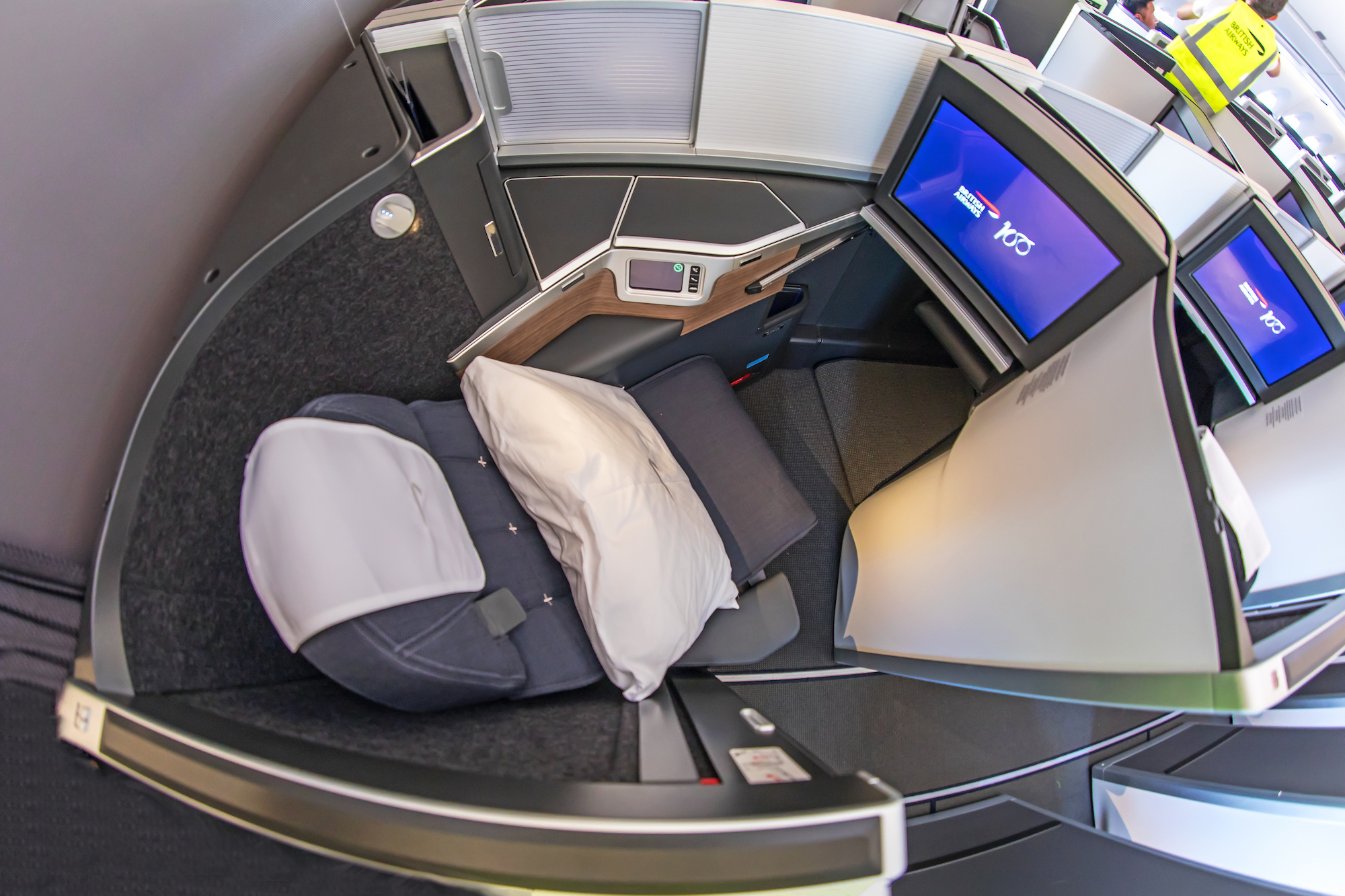 Following this experience, the Inflight Product Head Sajida Ismail gave a speech about how the new Club Suite came about and issuing a thank-you to the design team who worked on the suite.

Onboard the aircraft, it’s clear to see the intricacy placed into the design of the features. The new Club Suite has vast amounts of storage space, as well as the large overhead lockers onboard the A350. The suite features a reading light, sliding door for extra privacy, large in-flight entertainment screen with a remote control and USB and UK power outlets. The suite is very spacious and comfortable, and when the sliding door — and dividing screen in the center suites — is closed, there is a real sense of privacy. The suites are in 1-2-1 configuration and were produced by Super Diamond.

Another new feature to the A350 is the Club Kitchen, where Club World passengers can go to pour themselves a drink into a glass or take a sandwich from the chillers in-flight. The Club Kitchen is between the two sections of Club World at the second door. As the rear section of Club World has fewer suites, it feels more private and exclusive. 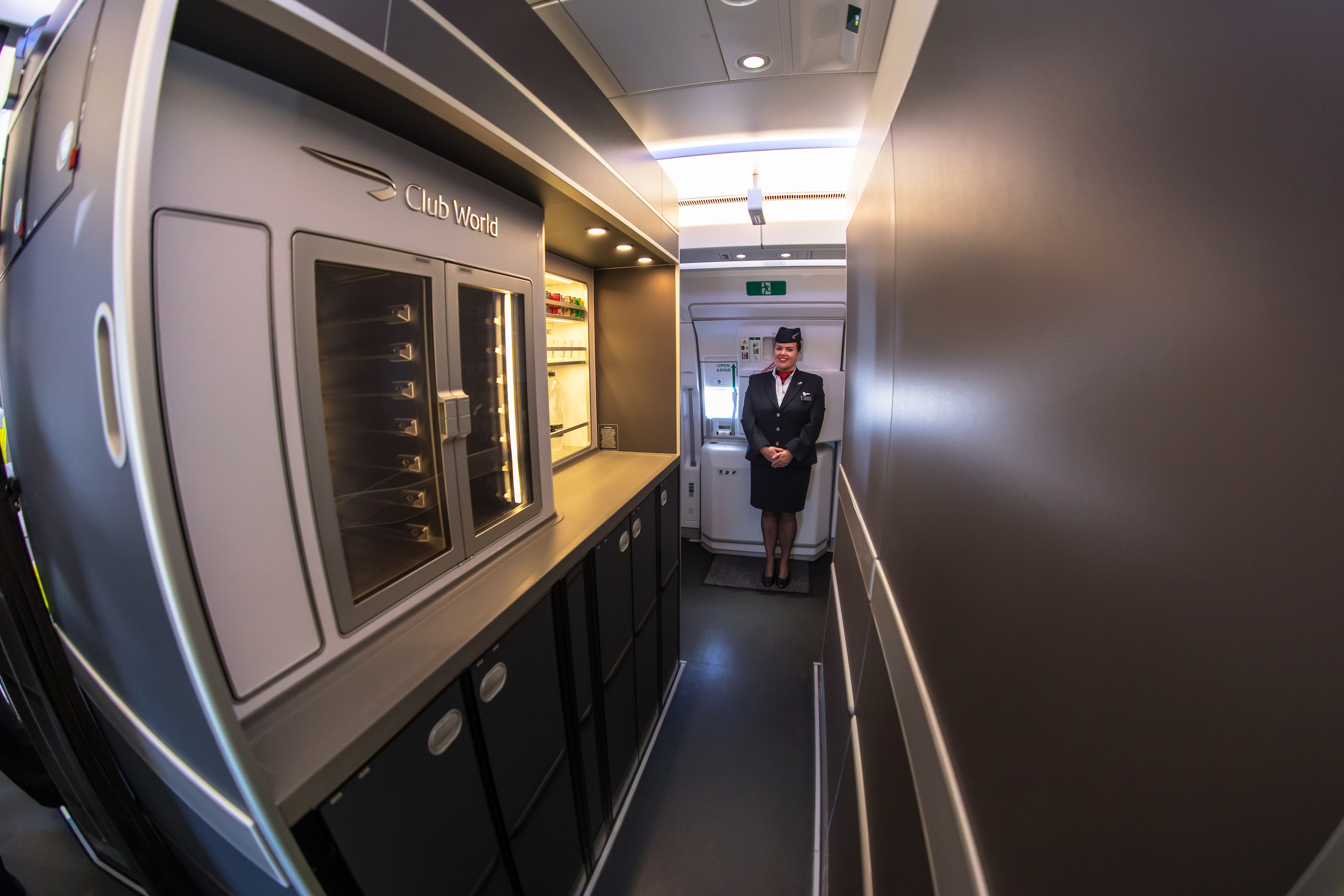 The Club Kitchen on BA’s A350 (Photo: AirlineGeeks | William Derrickson)

In World Traveller Plus, the airline’s premium economy product, the seats are laid out in a 2-4-2 configuration. The seats feature 38 inches of pitch, a six-way adjustable headrest, a large in-flight entertainment screen and a footrest. The new World Traveller Plus product includes different menus, new amenities and welcome cocktails.

In British Airways’ economy product, World Traveller, the 219 seats feature 31 inches of legroom. The cabin is set out in a 3-3-3 configuration and is split into two sections by lavatories at the third exit door. These seats are comfortable and feature an adjustable headrest and plenty of space underneath for bag storage. 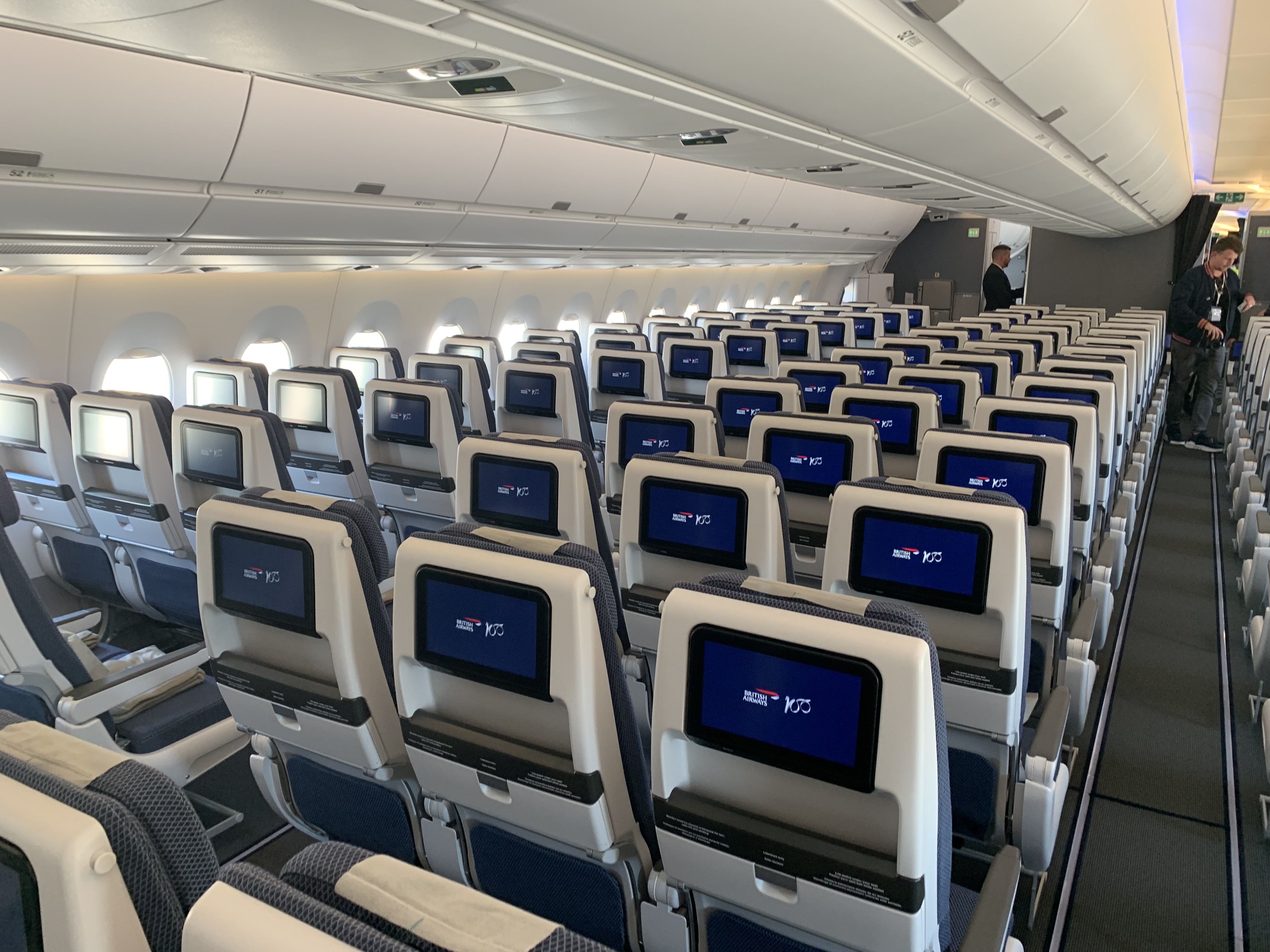 The rear galley is spacious but not to the full width of the aircraft as there are also two lavatories at the back of World Traveller. When talking to a member of the cabin crew, he informed AirlineGeeks that there would be 13 crew altogether on an A350 flight. 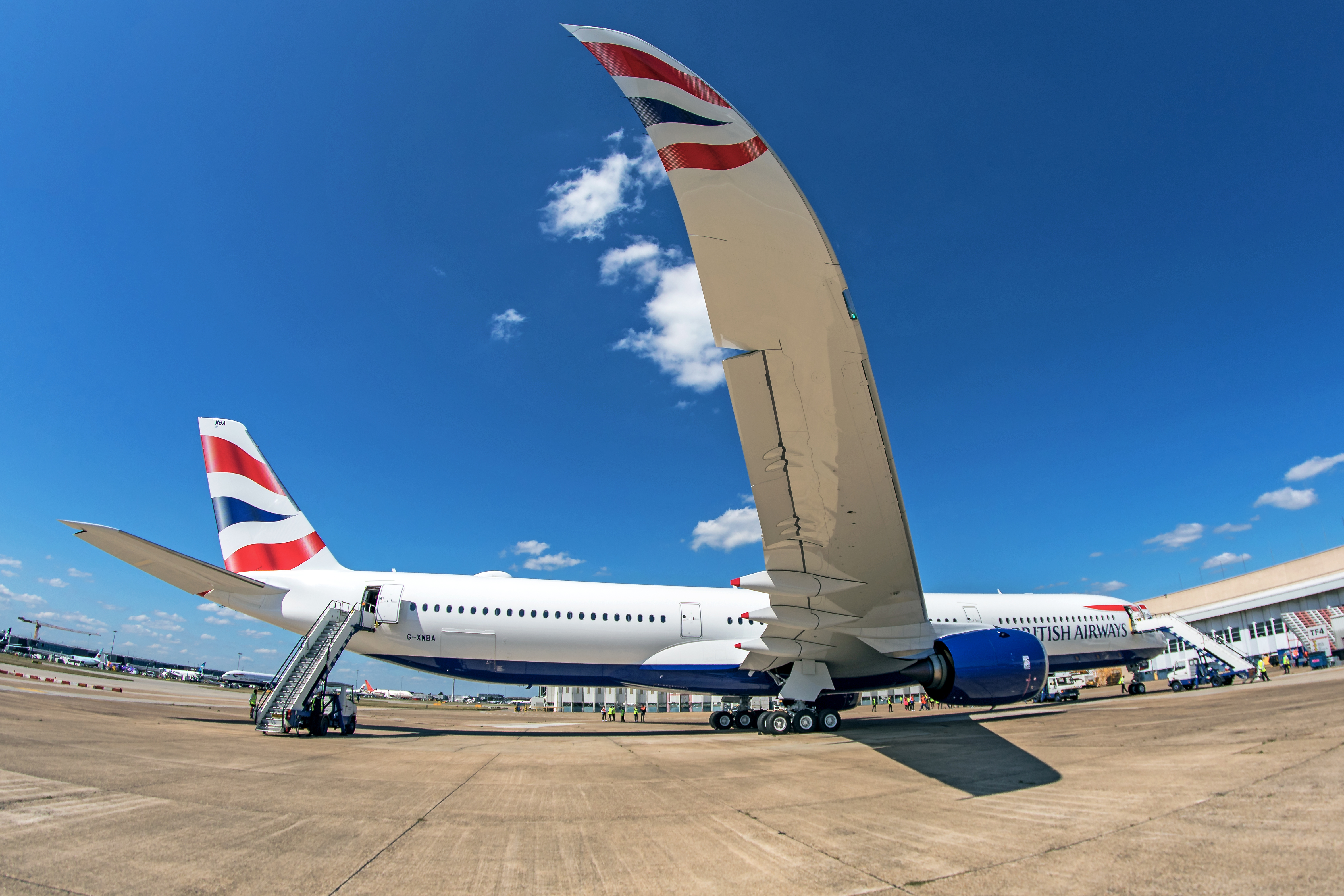 The A350 is scheduled to take its first revenue flight to Madrid in August, followed by its introduction to long-haul service in September to Dubai. Other destinations that the aircraft will be flying to include Toronto, Tel Aviv and Bangalore.