Airlines often find ways to give back to their respective communities. It is certainly not uncommon to see a carrier donate a few thousand dollars to an aviation educational program or give back to a community in need. While some may be tax write-off or the idea from a public relations team, a long-standing tradition in the industry has been the Honor Flight programs which bring veterans from across the country to Washington, D.C.

Most major U.S. carriers, including United, Delta, Southwest and American, participate in Honor Flight programs. The airlines offer their aircraft to bring World War II, Korean War and Vietnam War veterans to see their memorials in the nation’s capital.

There is no shortage of these flights at Washington’s Ronald Reagan National Airport, the closest airport to the National Mall where most of the city’s memorials are found, especially during the springtime when the weather is more favorable. Almost every one of these flights is met with a water cannon salute and a large crowd emanating from the arrival gate throughout the airport’s narrow concourses.

Every U.S. airline does Honor Flights in some form or another, but Fort Worth-based American Airlines brings more veterans to D.C. than any other. The carrier has partnered with various chapters of the Honor Flight Network around the country so that these veterans will have the chance to see their respective memorials. 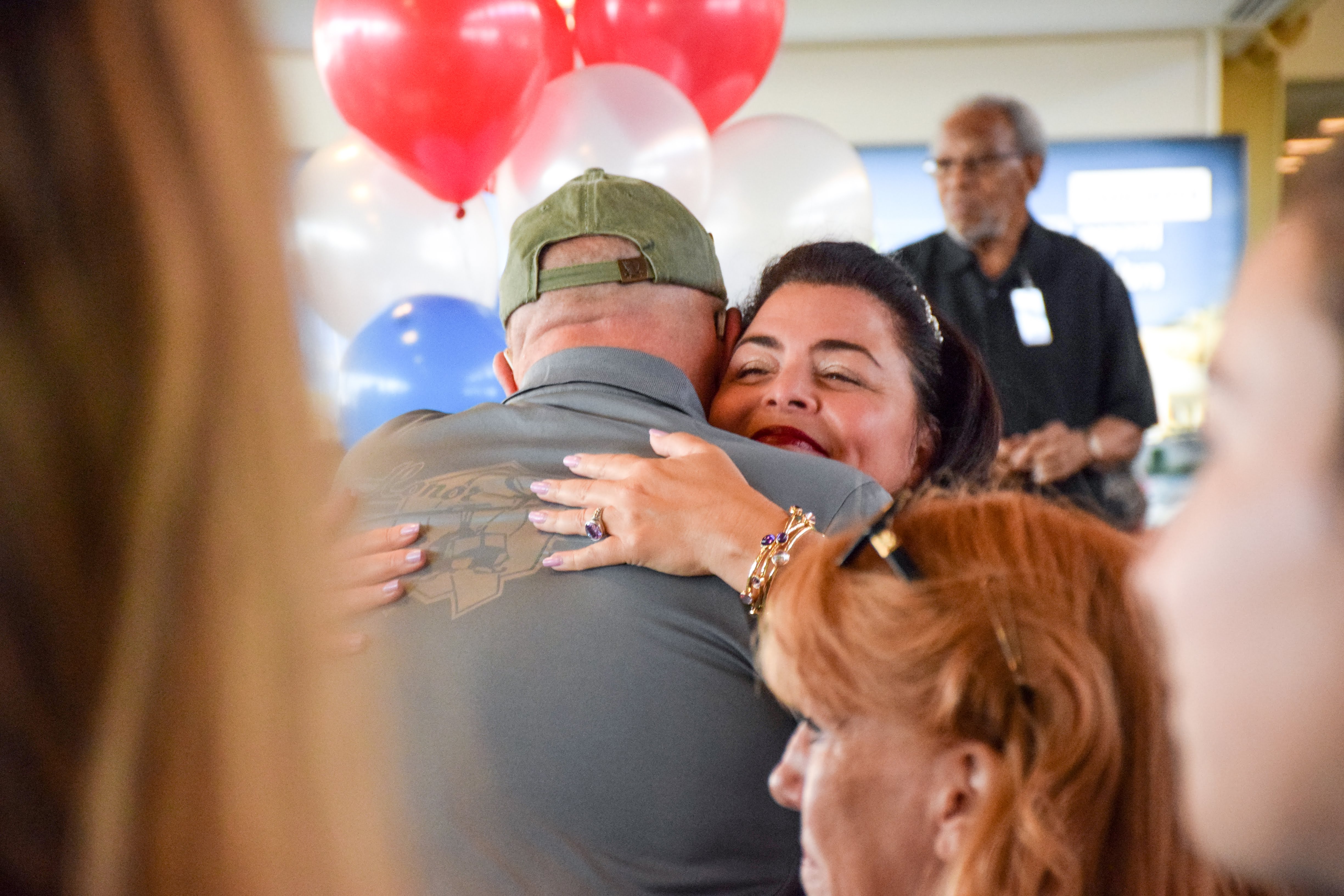 In May 2019, American operated its 700th honor flight. Most of these flights are charters meaning that veterans, volunteers and guardians fill the entire aircraft and buying a ticket is not an option. Each flight has up to 150 veterans onboard.

According to representatives from the airline, American has transported over 225,000 veterans since the program started taking shape in Sep. 2006 with a US Airways flight from Asheville, N.C. to Washington. At the time, US Airways, now American Airlines, maintained a sizeable presence at the D.C. airport. 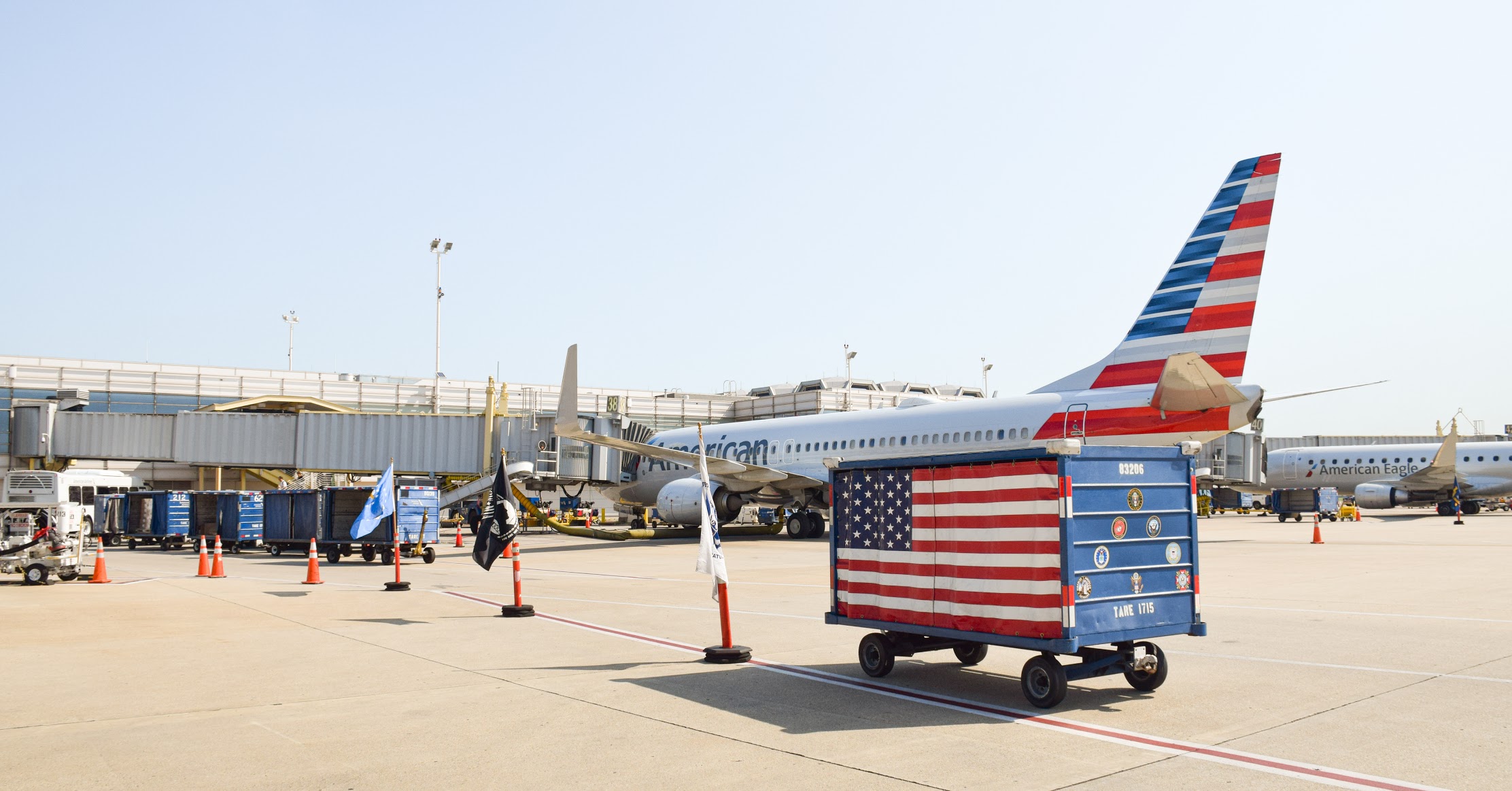 It is certainly easy to get lost in the chaos of today’s airline industry. From the lines to the hoards of people strolling through the concourse, there isn’t exactly a place to find a sense of peace or refuge. This is where the Honor Flight program stands out; it brings people together, strangers simply trying to get from one airport to the next. 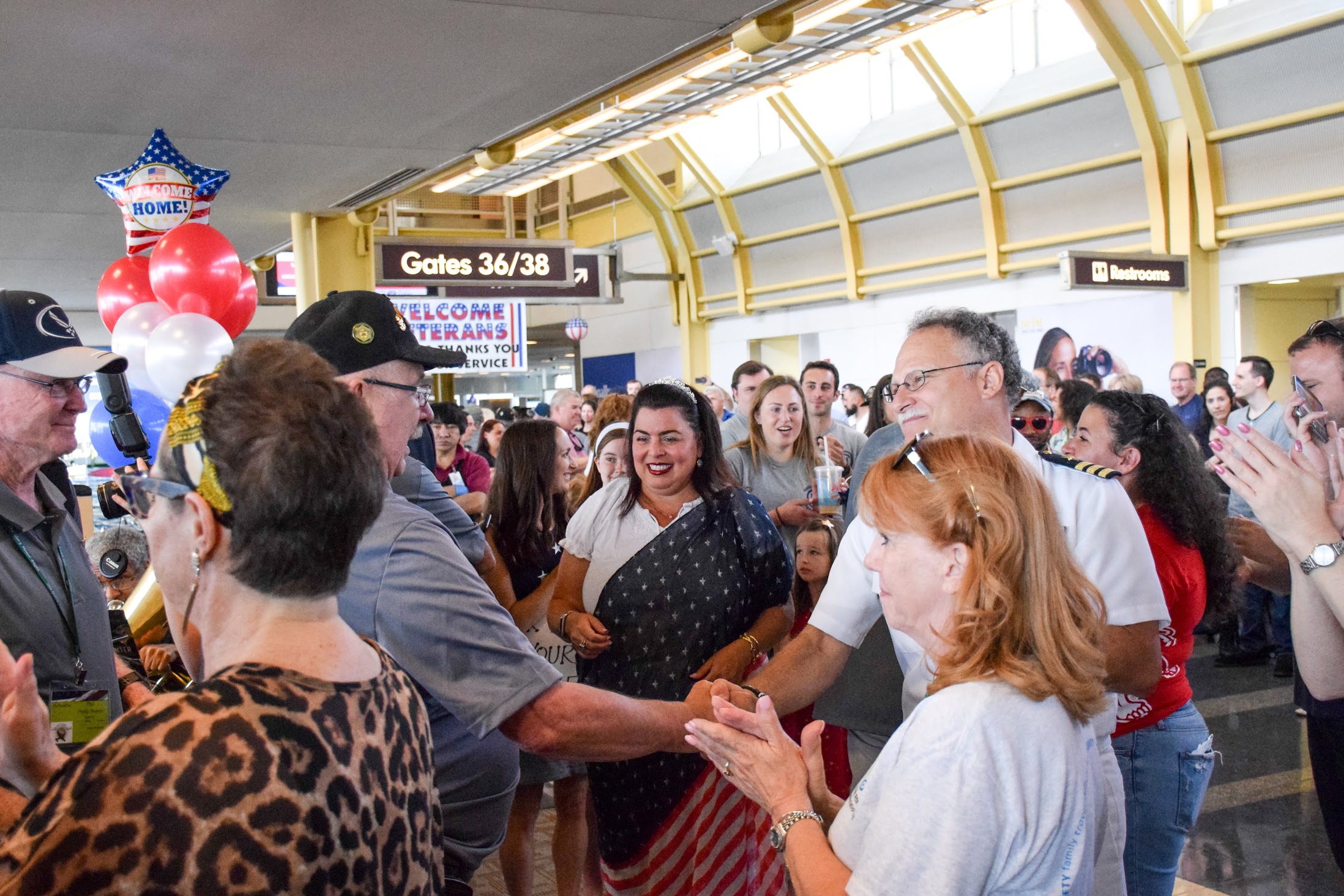 When one of these flights arrives, many passengers who would otherwise be waiting for their flight or heading out the door take a moment to head to the patriotic-adorned gate as the veterans step off the aircraft for a day they’ll never forget. A message from the airport’s public announcement system always informs airport visitors of the flight’s arrival and where passersby can greet our country’s heroes.

At American’s Terminal C at National Airport, it isn’t uncommon to see a line of people running the length of the concourse with each person wanting the opportunity to shake the hand of a veteran. While the band’s music amplifies through the terminal, positive emotions fill the air, which is not a sight often seen in the hodgepodge of air transportation today.

After stepping off the aircraft early in the morning, the group loads onto buses to head to nearby downtown D.C. to see memorials, monuments and museums. On most trips, they return later in the evening for their flight back home, usually on the same chartered airplane. 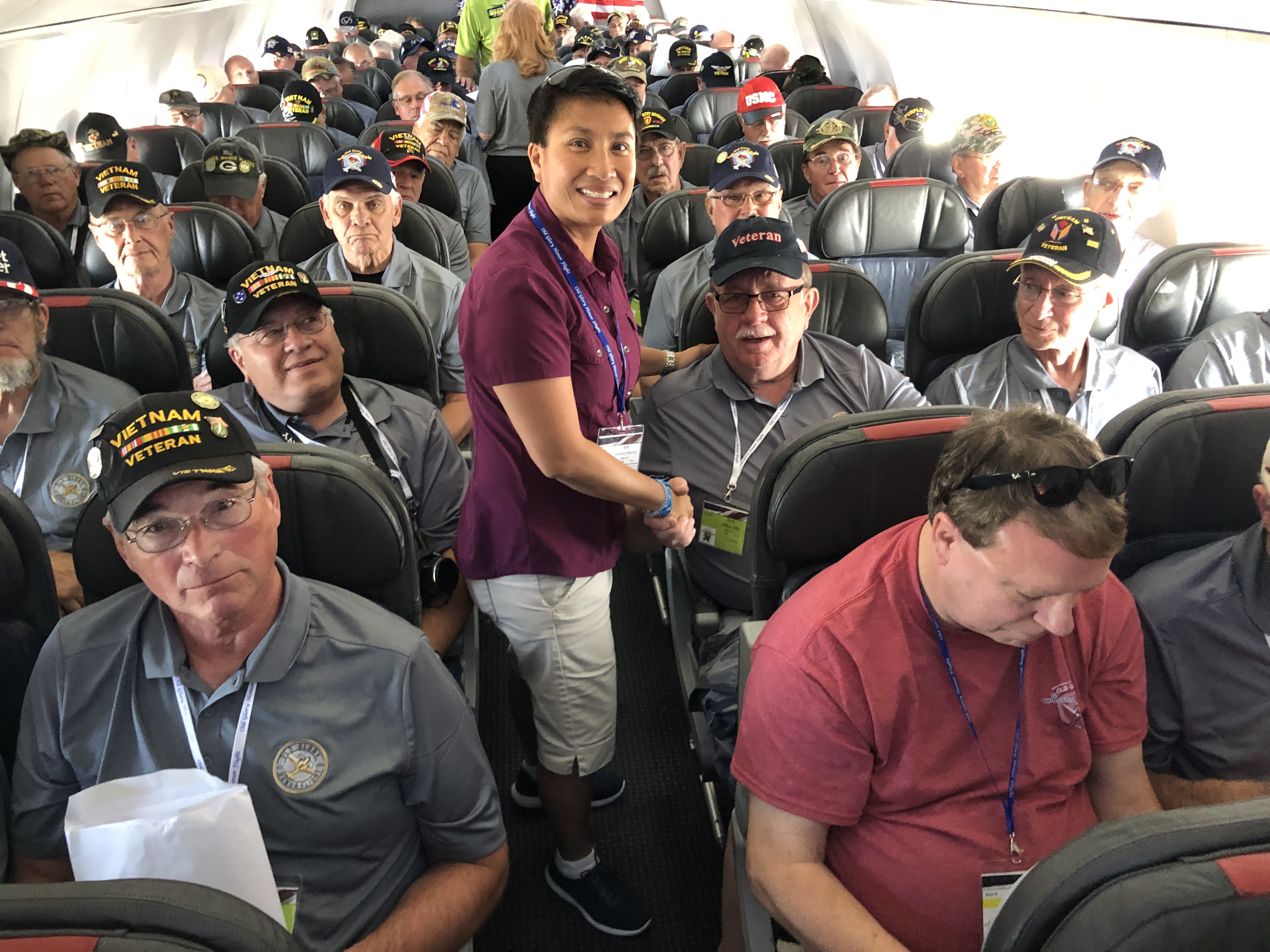 Kim Mitchell, president of the Veterans Village of San Diego, shakes hands onboard the flight back to Oshkosh. (Photo: AirlineGeeks | Ryan Ewing)

Each July, American Airlines partners with Wisconsin’s Old Glory Honor Flight chapter to donate the so-called ‘Yellow Ribbon’ flight. This flight is made especially unique given the fact that it operates from Oshkosh, Wisc.’s Wittman Airport during the heart of the world’s largest airshow, EAA Airventure Oshkosh. During a one week period in late-July, Oshkosh is also the world’s busiest airport, showcasing some of the latest and greatest jets, along with aviation enthusiasts from around the world.

Complete with a volunteer American Airlines crew and donated Boeing 737-800, the Honor Flight departed Oshkosh on July 26 early in the morning with 125 veterans onboard, arriving in D.C. just after 9:00 a.m. The flight was met with a cheering crowd as the veterans stepped off for a day of appreciation, hand-shaking, and emotions.

After a day in the nation’s capital, the Vietnam War veterans were bussed back to Reagan Airport with a police escort. Their flight departed at 5:00 p.m. back to Oshkosh.

At gate 38, a sense of calm was prevalent — a feeling that these veterans were not forgotten despite the circumstances surrounding the Vietnam War — there was both laughter and tears. A surreal day had ended for these 125 veterans, but what they didn’t know that the appreciation for their service was just beginning.

Unlike regular flights, there are no boarding passes or zones for this trip back to Oshkosh. The only similarity is the assigned seats printed on the passengers’ name badges. At the gate and on the airplane, there was no shortage of chatter. Veterans were telling each other stories, reminiscing, and recapping the day.

On most flights, most sit down, put in their headphones and tune out the world for an hour and a half. Here, though, the entire 737 was filled with laughter and voices. After the safety video had been played during the taxi out of D.C., one of the volunteer crew members sarcastically commented on the public address system, “thanks to the four of you who watched that!” 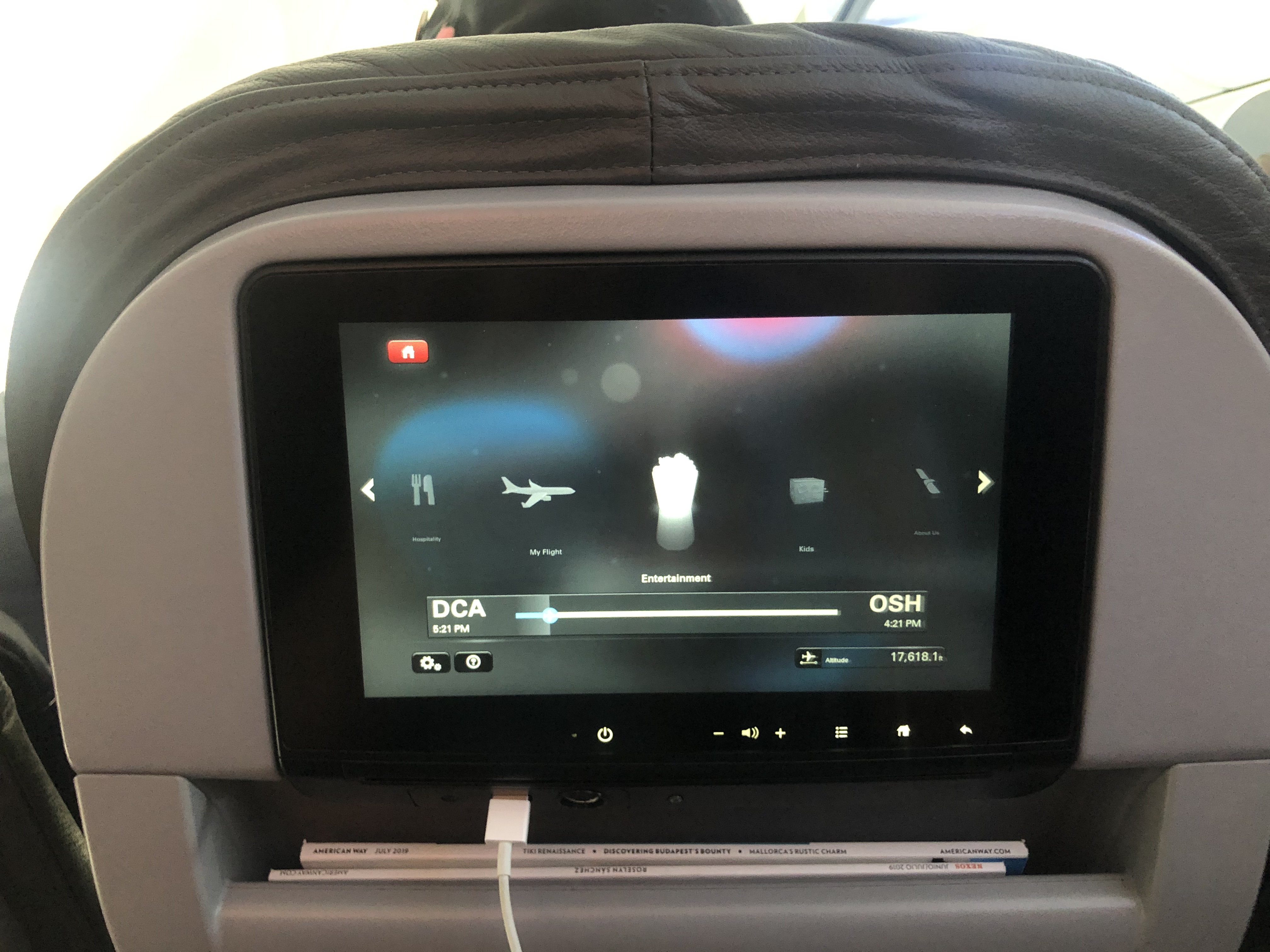 The flight itself from Washington to Oshkosh would last for just over two hours. After departure, the cabin crew was quick to come around with some inflight food for the vets. A bagged lunch consisting of a turkey club sandwich and cookie was served, along with soft drinks.

Following the service, it was time for mail call — a decades-old tradition of the U.S. military where soldiers would receive mail from their loved ones while in combat. Though, on this flight, the veterans remained comfortably in their seats while program leaders passed around mail to each individual. Large suitcases filled with letters were lugged out of the overhead bins.

These pieces of mail started to strike emotions in the cabin — the atmosphere onboard slowly became quieter as the veterans read these heartfelt letters of appreciation for their service. The perfect end to a day of appreciation? Not quite; the events were far from over. 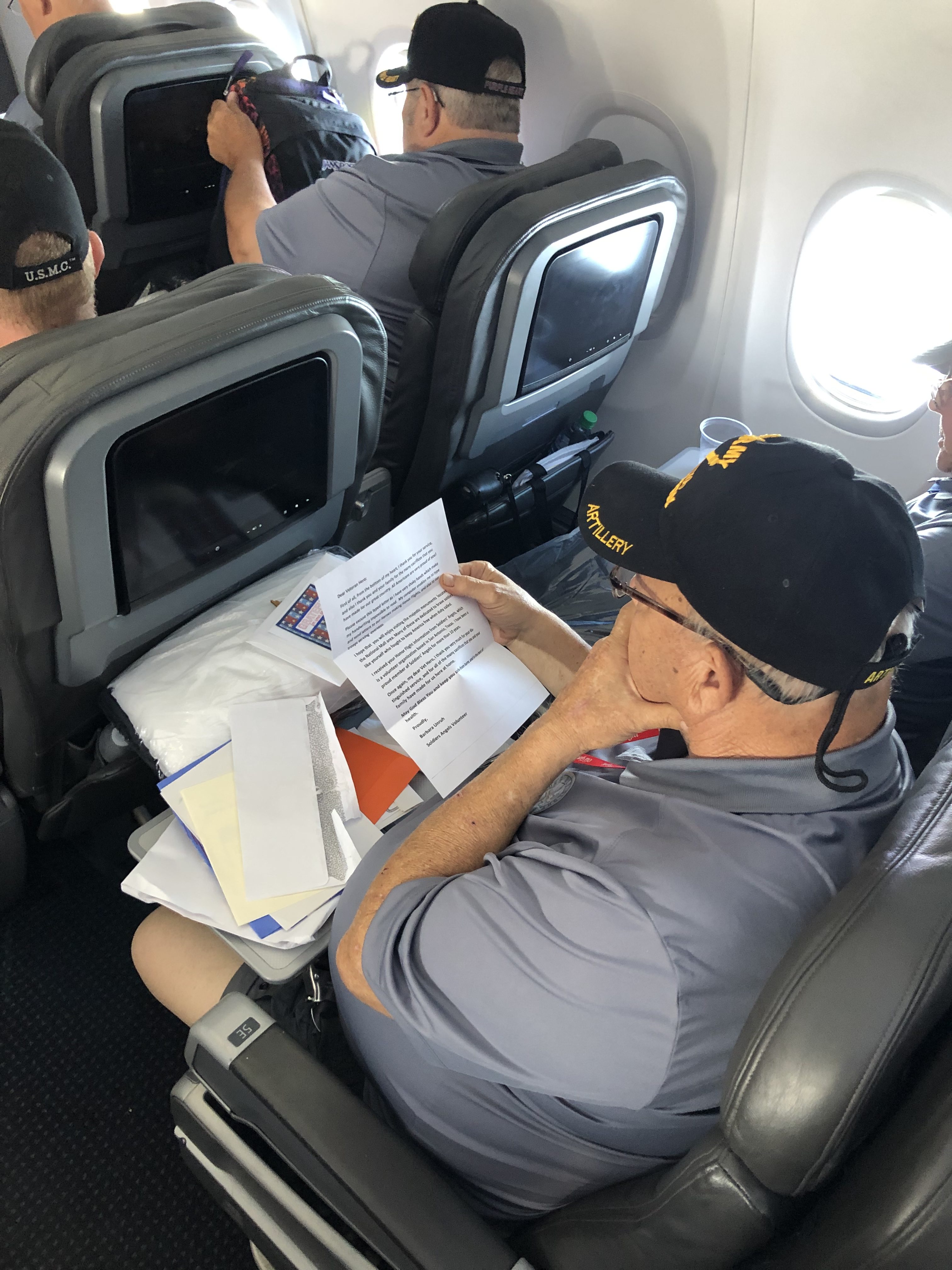 Veterans read mail that was passed out on the flight. (Photo: AirlineGeeks | Ryan Ewing)

As the jet began its descent into Oshkosh, one of the group leaders came on the public address system advising the veterans to remain in their seats after parking. She said, “there are a few people that want to see you guys.” This was the perfect definition of an understatement.

The flight was forced to enter a brief holding pattern southwest of Whitman Airport as the airshow was still taking place. An F-35 Lightning was airborne and had to land before the 737. The captain came on saying, “If you look out to your left, you’ll see the Air Force.” This garnered the attention of the passengers, some former Air Force service members, as they gazed out upon the evening Wisconsin skies. 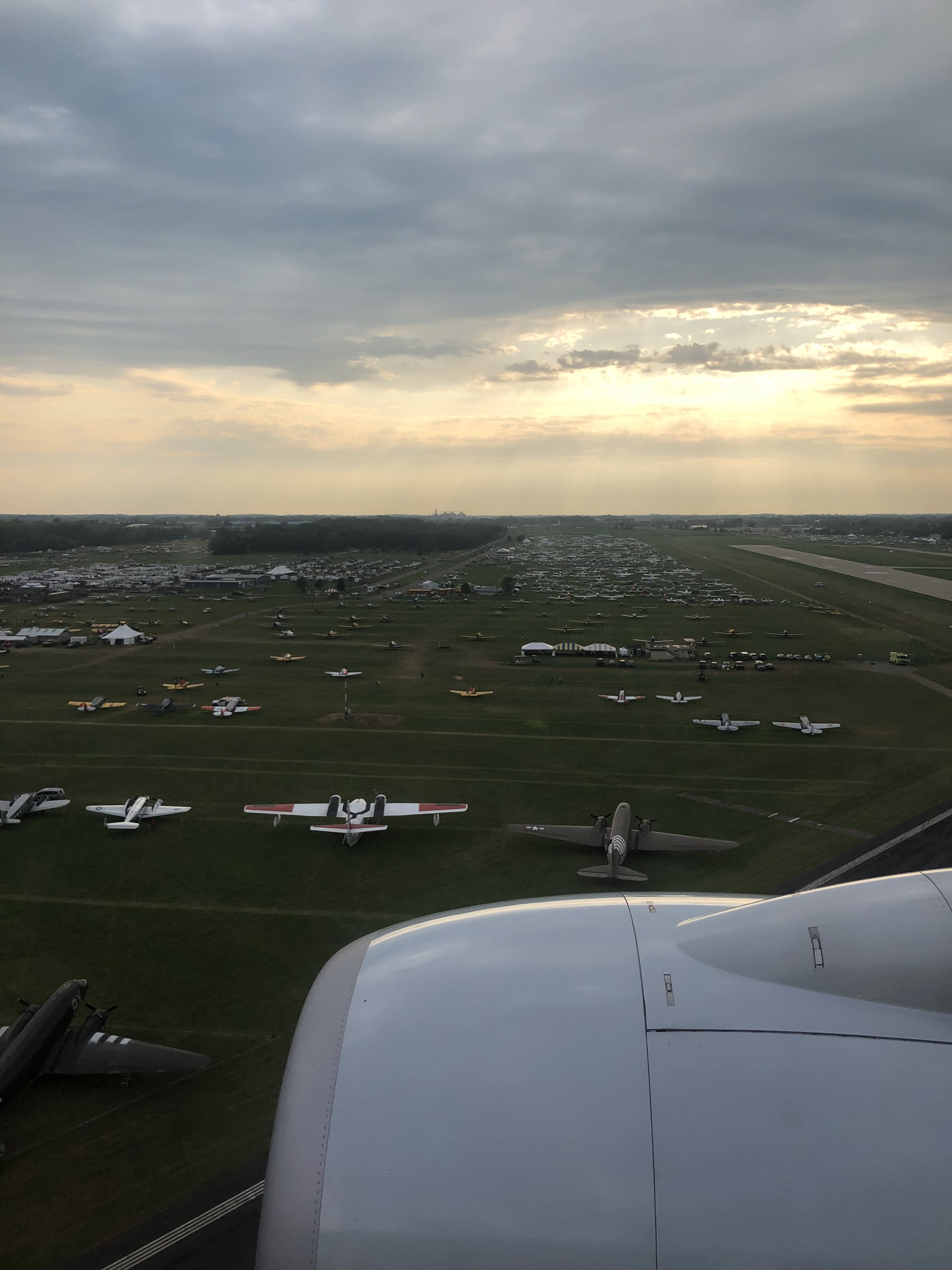 N987NN, the aircraft operating the special flight, touched down in Oshkosh around 6:20 p.m. The flight exited the runway and was greeted with a water cannon salute by the airport’s fire department. This was the veterans’ second water cannon salute of the day as they also received one while arriving in Washington.

As the Boeing 737 entered the Boeing Plaza at EAA Airventure Oshkosh, a sea of people could be seen; thousands, once again, looking to give their thanks to these heroes. The aircraft quickly became the centerpiece of the airshow as more airshow attendees flocked towards the nose. One-by-one, the veterans stepped off, met with cheers, appreciative signage and applause. 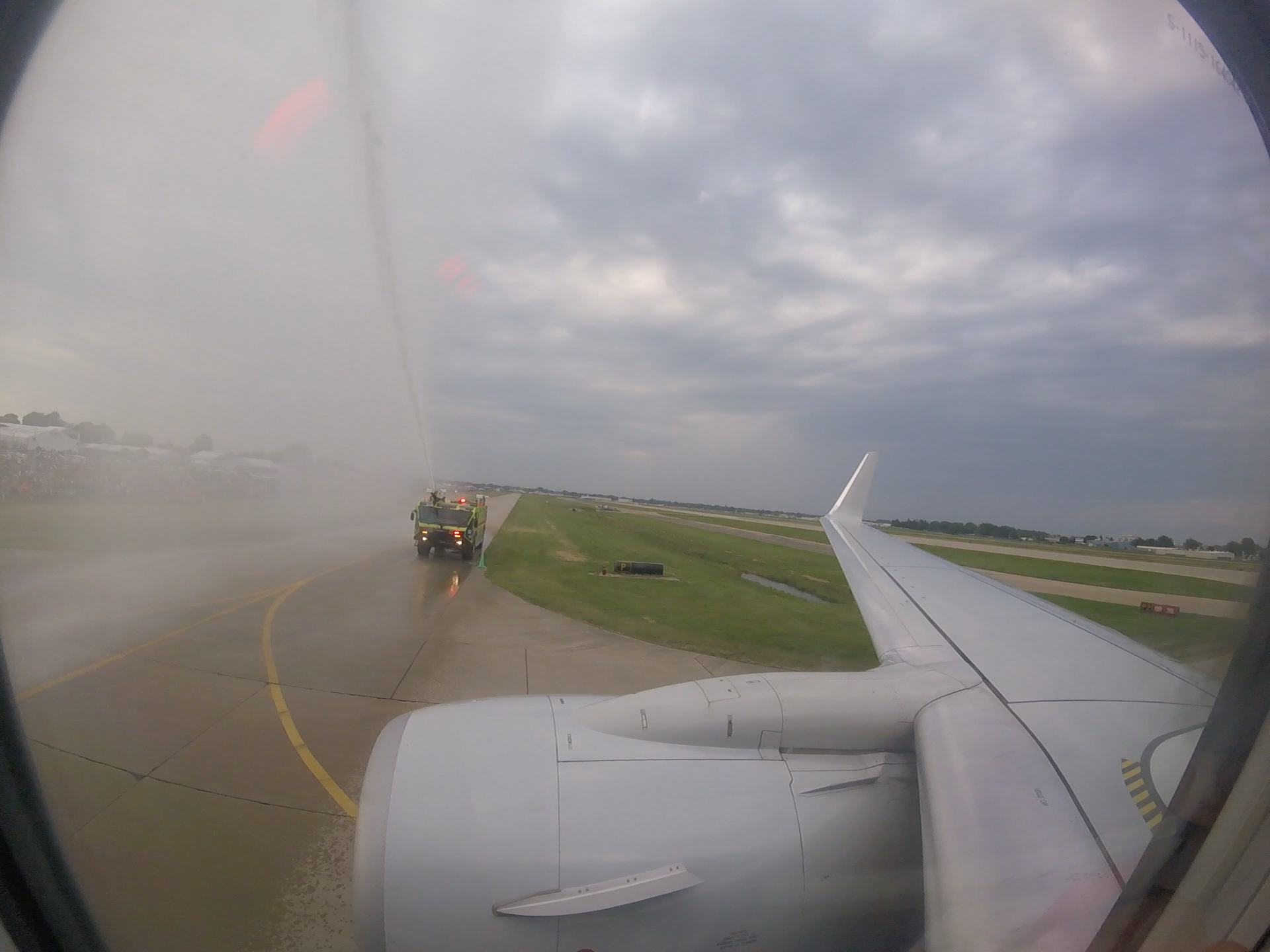 A water cannon salute for the veterans upon arrival in Oshkosh. (Photo: AirlineGeeks | Ryan Ewing)

At this point, it was clear that the emotions were setting in for the 125 veterans. The cabin was almost completely quiet while taxiing into the plaza, except for brief applause after landing. As they gripped the letters that they received during the mail call, a few vets were shedding some tears while walking down the air ramp. Others were still smiling, obviously reminiscing on a remarkable day.

A view of the Boeing Plaza and crowd meeting the veterans in Oshkosh. (Photo: AirlineGeeks | Ryan Ewing)

After unloading in Oshkosh, the 737 that operated the flight would reposition back to the airline’s hub at Dallas/Fort Worth International Airport where it would fly a normal revenue flight to Salt Lake City later that evening. For the 125 veterans that were onboard, the feelings were far from normal. They would return to their Wisconsin homes knowing that thousands continue to be appreciative of their service. 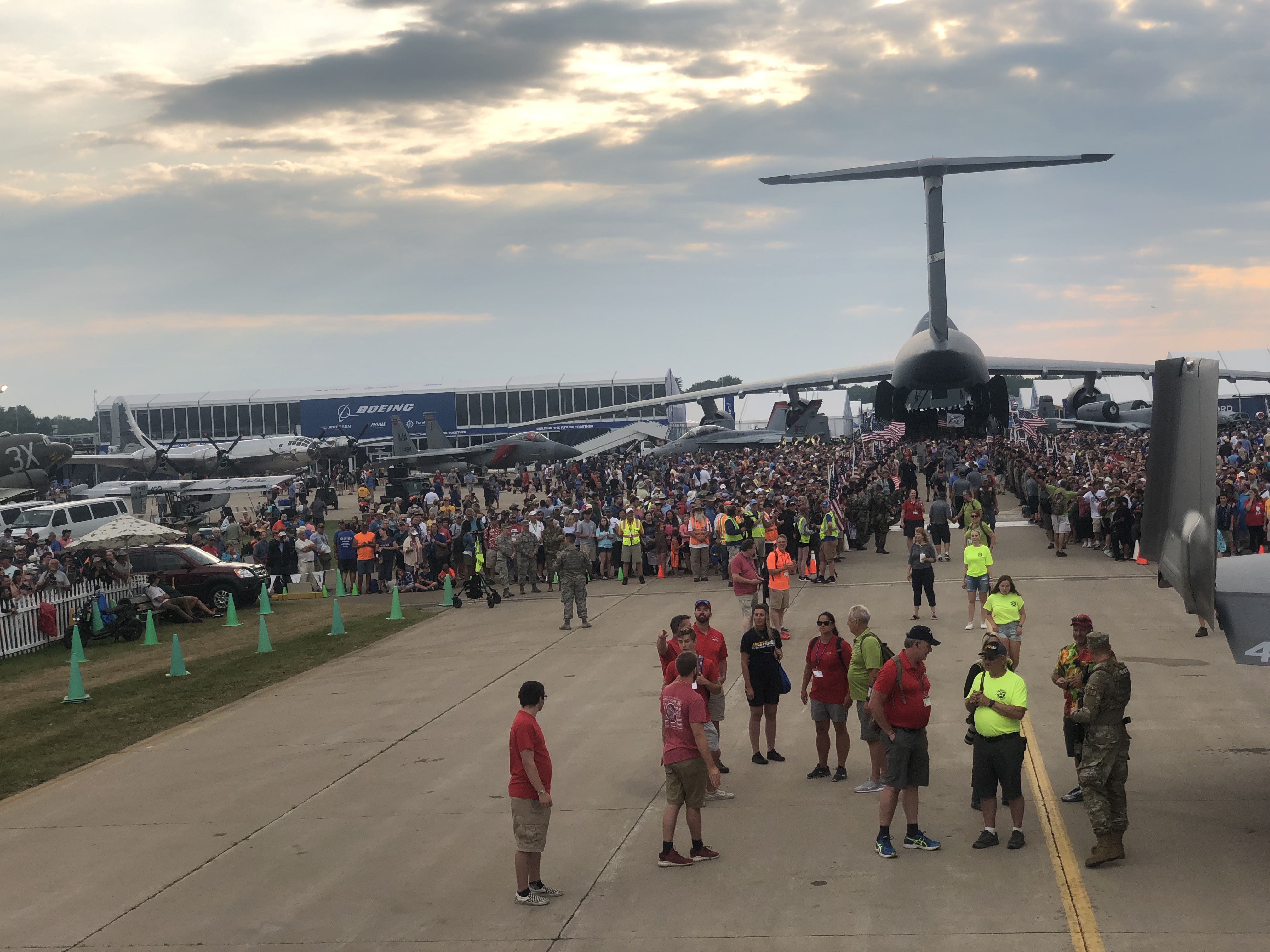 A massive crowd to greet the 737 in Oshkosh. (Photo: AirlineGeeks | Ryan Ewing)

Whether it’s lining up to shake a veteran’s hand at the airport, volunteering to be an American Airlines crew member on the flight itself, or being one of the thousands of onlookers in Oshkosh, people will take time out of their day to simply say thanks. As the Old Glory Honor Flight slogan says, ‘it’s never too late to say thank you.’

Follow Ryan
Ryan Ewing
Ryan founded AirlineGeeks.com back in February 2013 and has amassed considerable experience in the aviation sector. His work has been featured in several publications and news outlets, including CNN, WJLA, CNET, and Business Insider. During his time in the industry, he's worked in roles pertaining to airport operations and customer service while holding a B.S. in Air Transportation Management from Arizona State University along with pursuing a concurrent MBA and law program. Ryan has experience in several facets of the industry from behind the yoke of a Cessna 172 to interviewing airline industry executives. In addition to supporting AirlineGeeks, Ryan works full-time in the aviation industry.
Follow Ryan
Latest posts by Ryan Ewing (see all)
#OSH19AAairlinesEAAFeaturedHonor FlightOshkoshVeterans
Related Stories
[ Related Stories ]August 12, 2022 5:28 am ET
By Victor Shalton

Archer Aviation announced on Aug. 15 that it had received a $10 million pre-delivery payment from United Airlines. Archer secured the order of 100 with United in April 2021. The order was valued at $1 billion, meaning United Airlines put a 1% downpayment for the new aircraft. The payment marks…