Situated on the St. Lawrence River on the border with Canada, Ogdensburg, N.Y. is a town lost in time. Like many in New York state, the quiet border town’s time has long since passed with a near-constant population decrease since 1930, when the town’s population was at its greatest.

Once a booming port town on the St. Lawrence River, the town is now known for the multiple New York state prisons and a mix of public and private colleges in the surrounding region. Located at the mid-point between Massena and Alexandria Bay, it’s a closer drive from Ogdensburg to the capital of Canada than it is to the New York state capital. 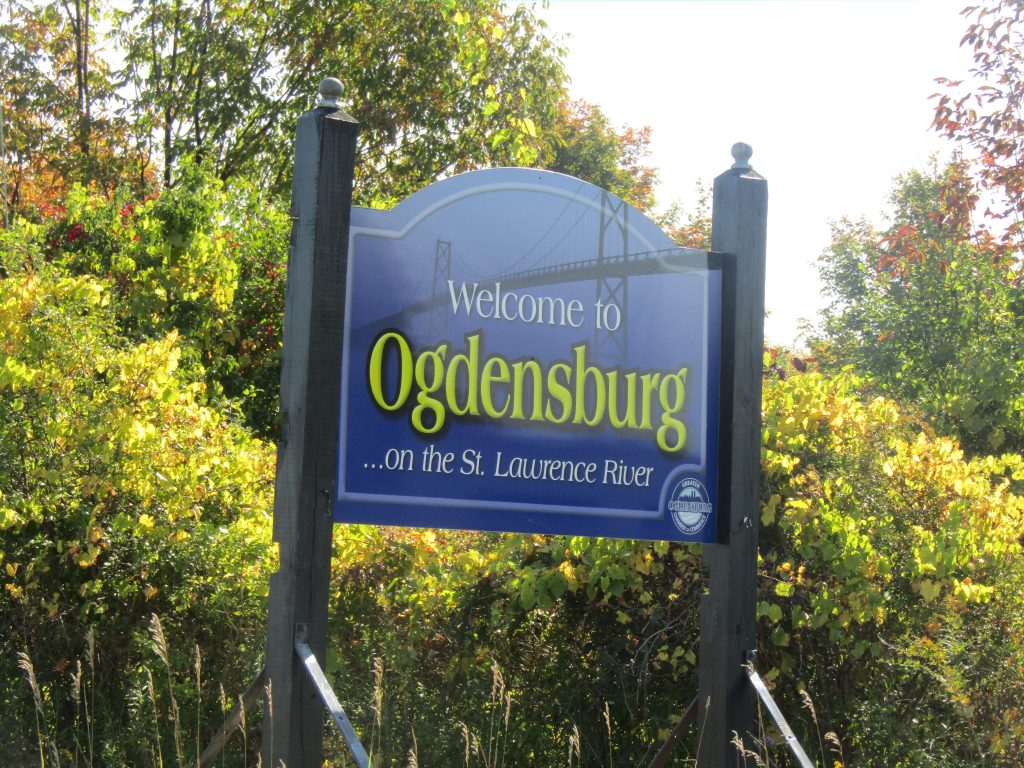 Ogdensburg is one of the furthest outposts of New York state located on the border with Canada. (Photo: AirlineGeeks | Tom Pallini)

A quintessential small-town, State St in Ogdensburg, the town’s main street, cuts right through the center of town and houses a good number of its businesses, including Ogdensburg International Airport. Located adjacent to a cemetery that is on the banks of the Oswegatchie River, the single-runway airport consists of the passenger terminal and a small general aviation section on the opposite side of the runway.

Having revisited the airport after our first visit last year, AirlineGeeks saw firsthand at how this small-town airport was doing its best with the tools it has on hand to attract flyers and brand itself as not only a gateway to Ogdensburg and the Thousand Islands region of New York but also to the Great White North.

A Small Airport in a Big State 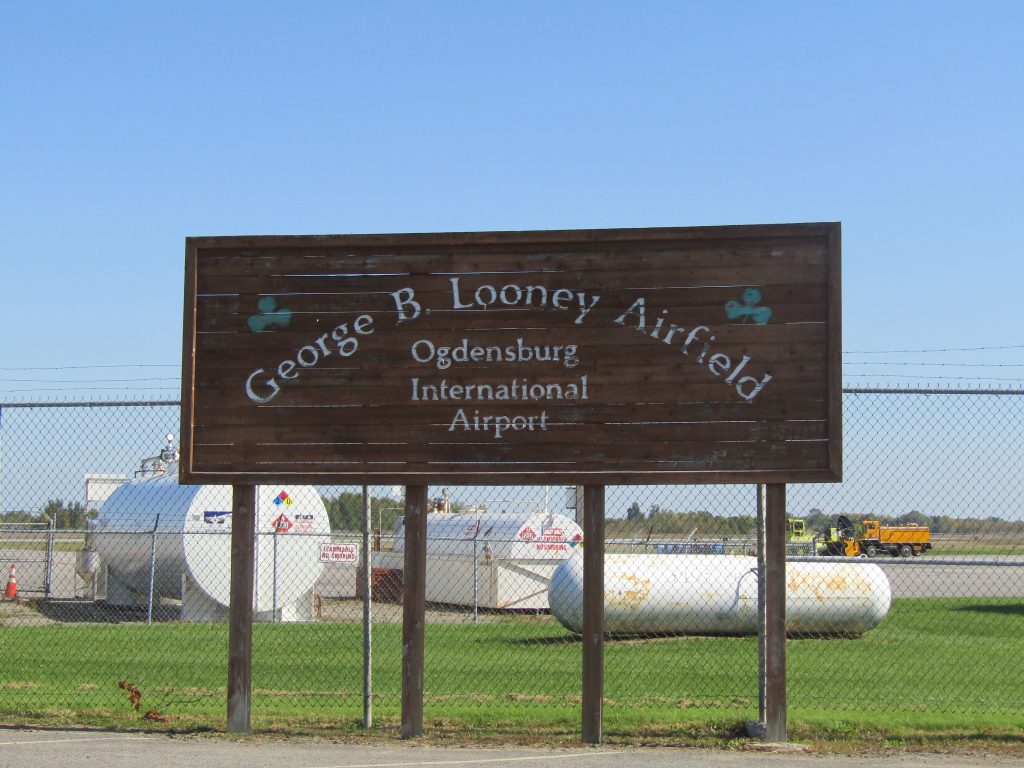 Unlike the other major airports of New York, Ogdensburg Airport isn’t connected to the town by special access highways or a monorail, but simply a driveway off Route 812, identified by a digital billboard with informational displays that rotate every few seconds. The advertisements for the airport highlight its recent successes and new nonstop destinations, except now it shows cities such as Washington, D.C. and Chicago instead of Albany. 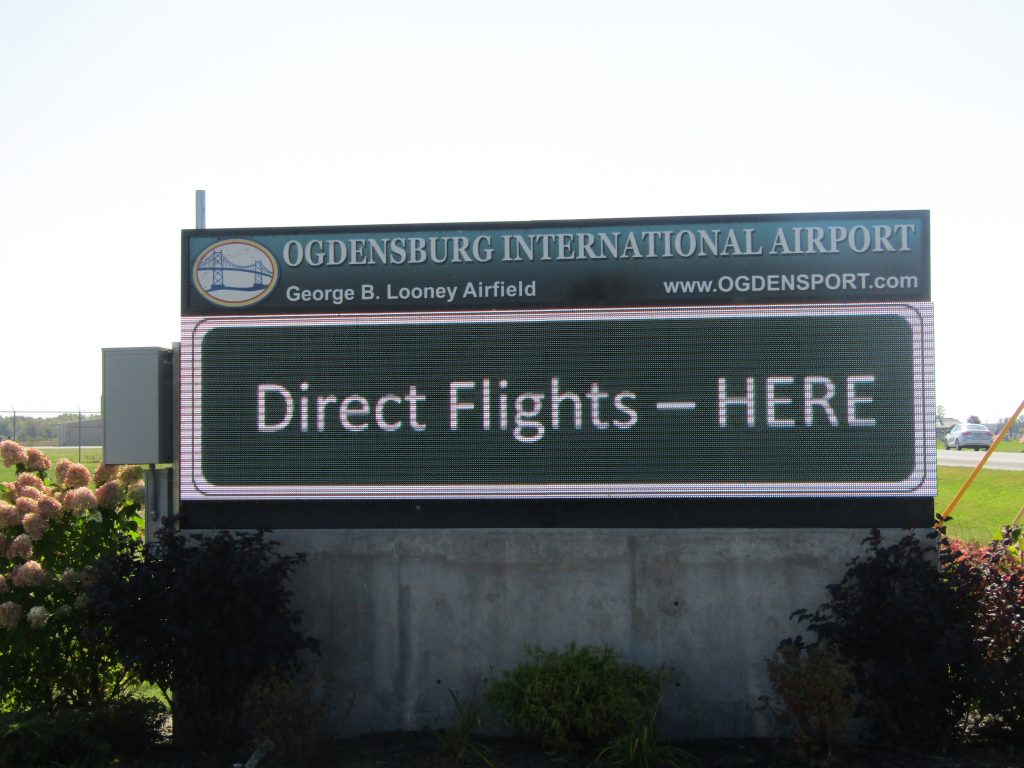 Driving up to the single-story main terminal, there are no separate levels for arrivals or departures, no airline signage telling drivers where to stop the car and only one door allows passengers to enter the newly-renovated terminal’s check-in area. 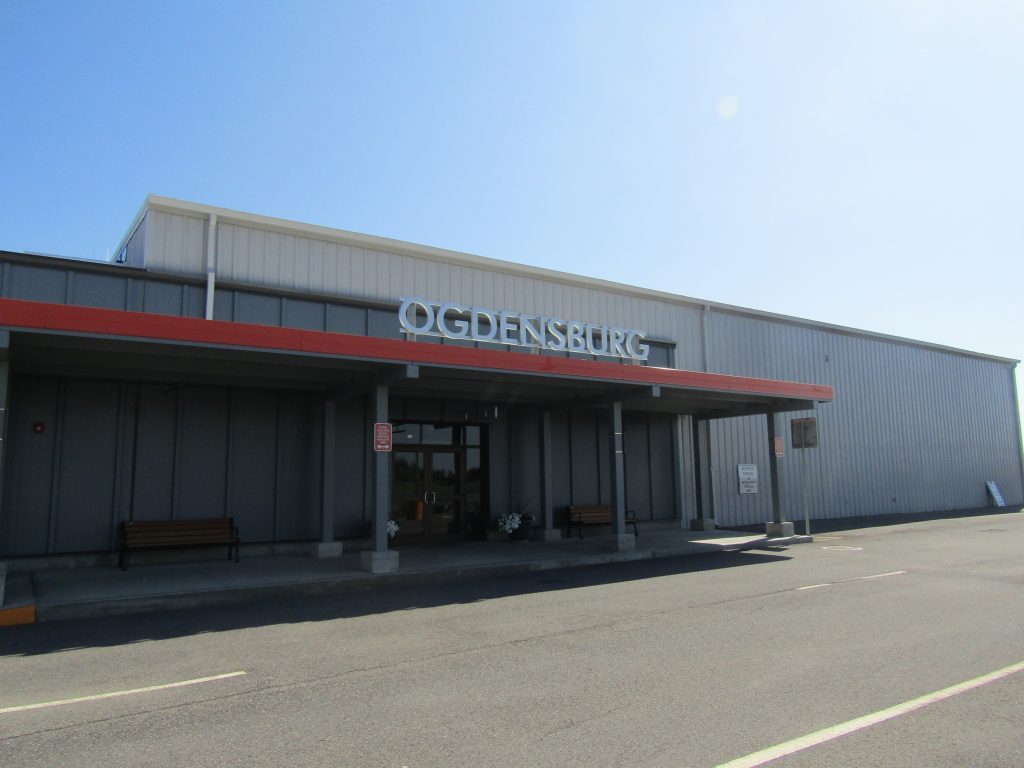 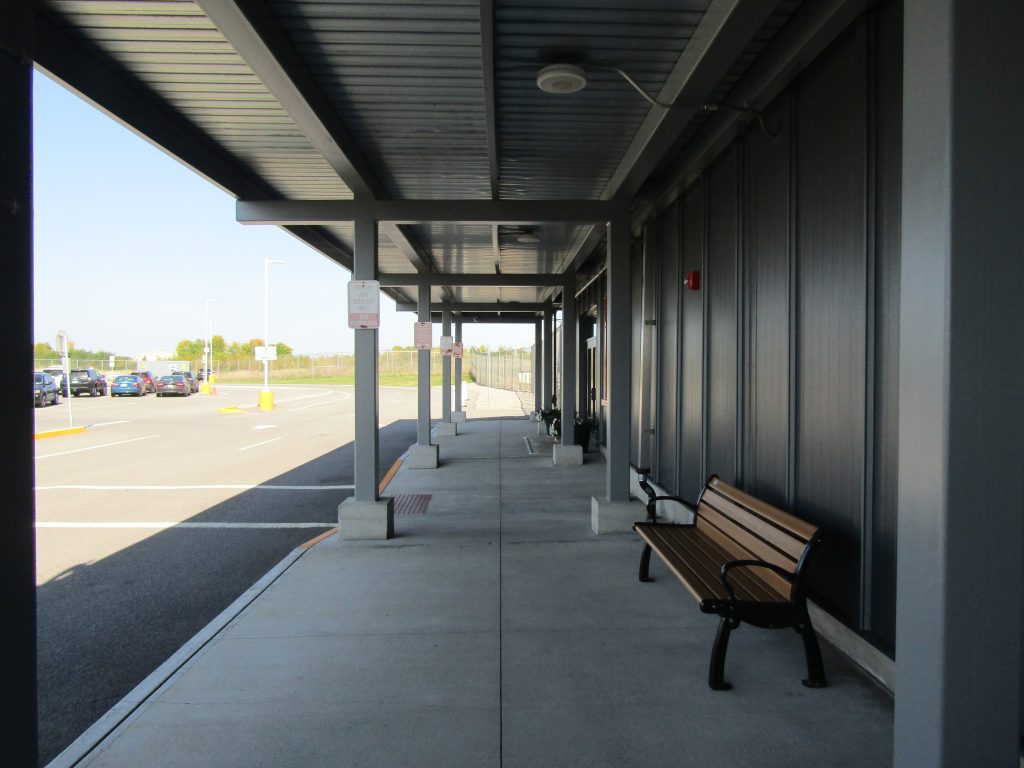 The main terminal building in Ogdensburg takes a no-frills approach and lacks the services found at many major airports. (Photo: AirlineGeeks | Tom Pallini)

One could hardly tell this airport recently went through a transformation that greatly improved its stature in the region.

AirlineGeeks first traveled to Ogdensburg last year with Cape Air to experience what it was like to fly on the unique carrier and its fleet of Cessna 402C aircraft, especially upfront in the right seat. Back then, Cape Air had been the town’s longest-serving lifeline, providing connections from Ogdensburg International Airport to Boston via Albany since 2008. Now, the city is no longer part of the Cape Air route network. 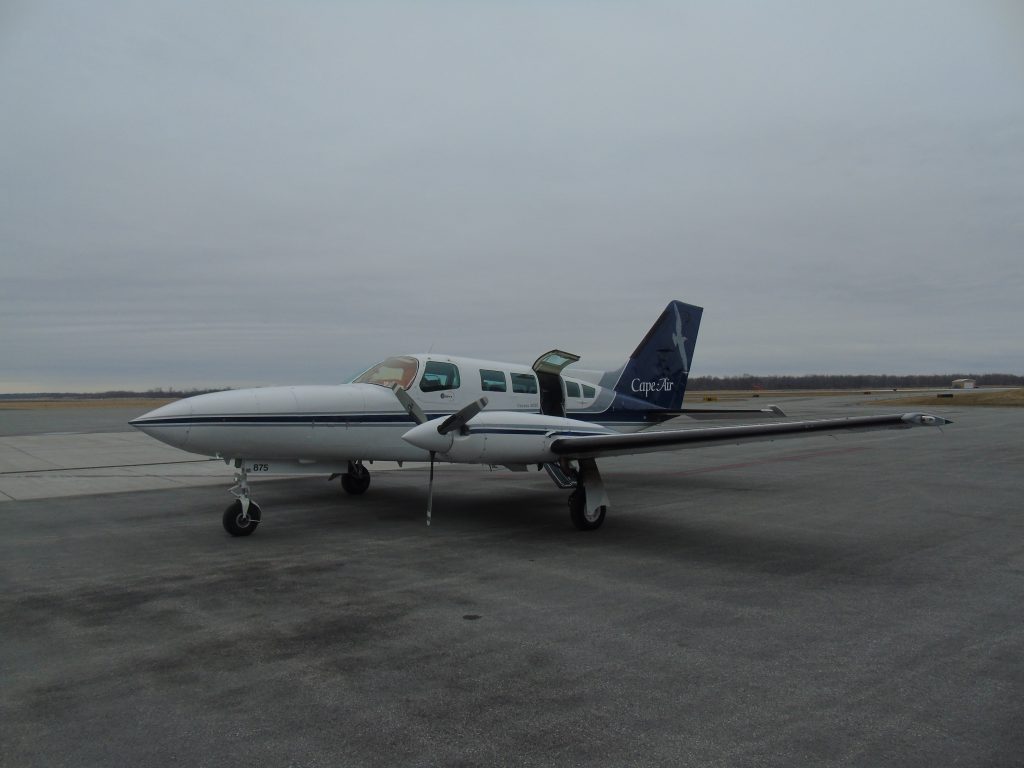 Despite its name, Cape Air has an extensive history of serving northern New York state. Once serving even the most remote towns including Watertown, Massena and Ogdensburg, the carrier is now relegated to one Upstate New York destination, Saranac Lake. Watertown and Massena were the first to go, with American Eagle and Boutique Air, respectively, replacing Cape Air in the past decade.

14 months after our visit, Ogdensburg saw its last Cape Air flight depart in May. The airline, which operated a ticket office in Ogdensburg and employed 11 locals, has now all but disappeared from North Country skies, with the exception of Saranac Lake.

Welcoming Ogdensburg to the Jet Age

Since AirlineGeeks’ last visit, though the airport has stayed largely the same, the airlines serving it have not. Immediately following Cape Air’s departure in May, United Express had moved in, with SkyWest Airlines being awarded the Essential Air Service contract for the city over Cape Air, Boutique Air and Silver Airways.

Utah-based SkyWest Airlines, a long way from home in remote Ogdensburg, now serves the city with the smallest member of its fleet, the Bombardier CRJ-200 regional jet. Despite operating a jet aircraft over Cape Air’s pistons, the subsidy required for SkyWest to operate the route under Essential Air Service was listed to be $2,998,813 from 2019 to 2021 whereas Cape Air’s requirements were $3,373,580 in year 1 of the continued service and $3,441,052 in year 2.

Under United Airlines’ regional brand, SkyWest began operations earlier this year in May. The regional carrier serves Ogdensburg with one daily roundtrip each to Chicago and Washington. The Chicago flight departs O’Hare International Airport in the afternoon, allowing for West Coast and even international connections. 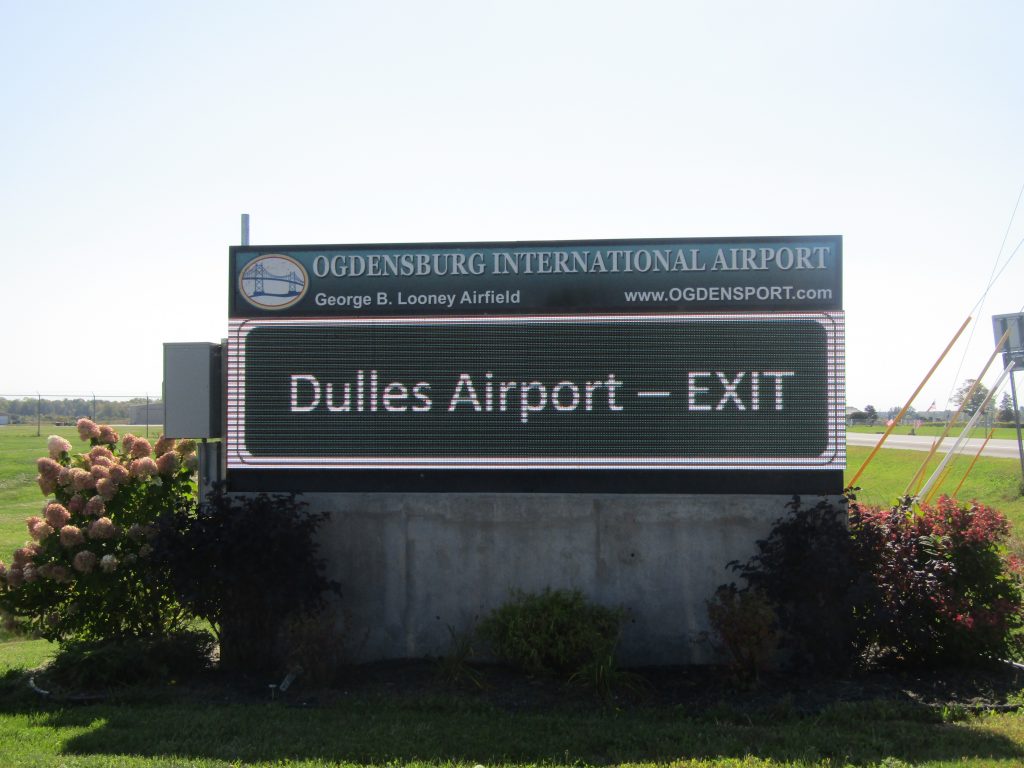 And while the return flight doesn’t continue back to the Windy City until the next morning, the aircraft heads down to Washington Dulles International Airport, where the evening arrival allows travelers to make onward connections to cities such as Munich, Frankfurt and Istanbul on United or other Star Alliance carriers.

After arriving in Washington, the return flight back to Ogdensburg departs an hour later, where the aircraft operating the flight stays the night and departs to Chicago in the early morning, in time for connections to destinations throughout the United and Star Alliance network. The cycle then begins again in the afternoon.

The Aftermath of Losing Cape Air

In the main terminal, the United Express desk occupies the former Cape Air desk. A large sign highlighting Cape Air’s codeshare with JetBlue airways has been replaced by a United-branded carry-on luggage tester. 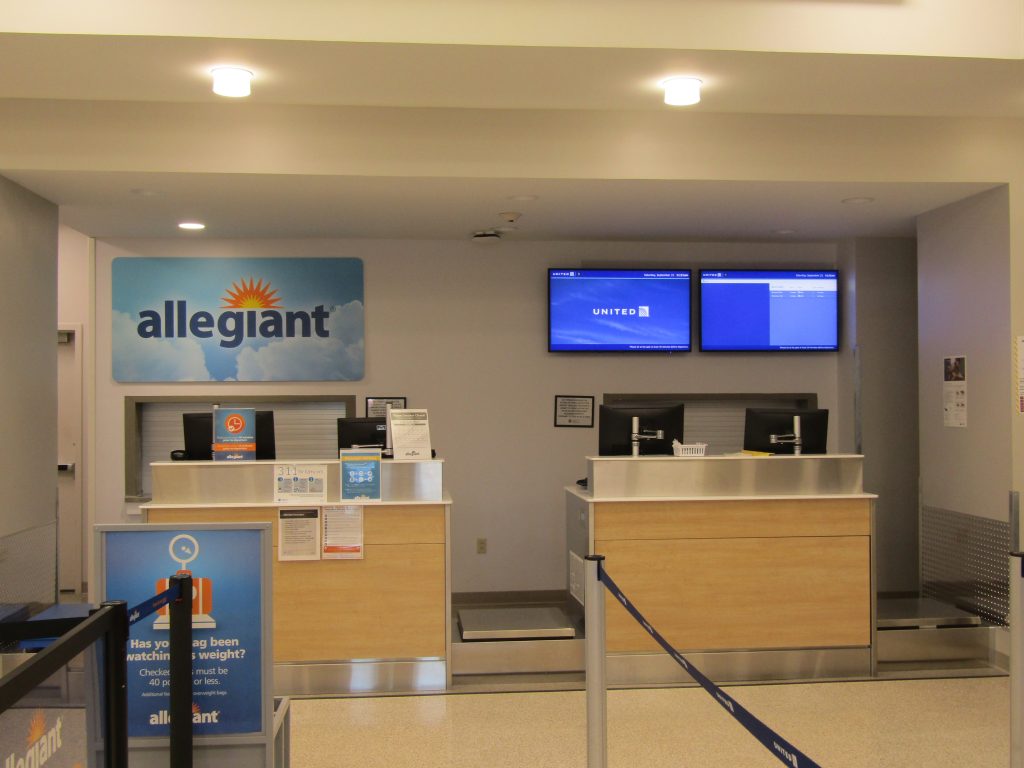 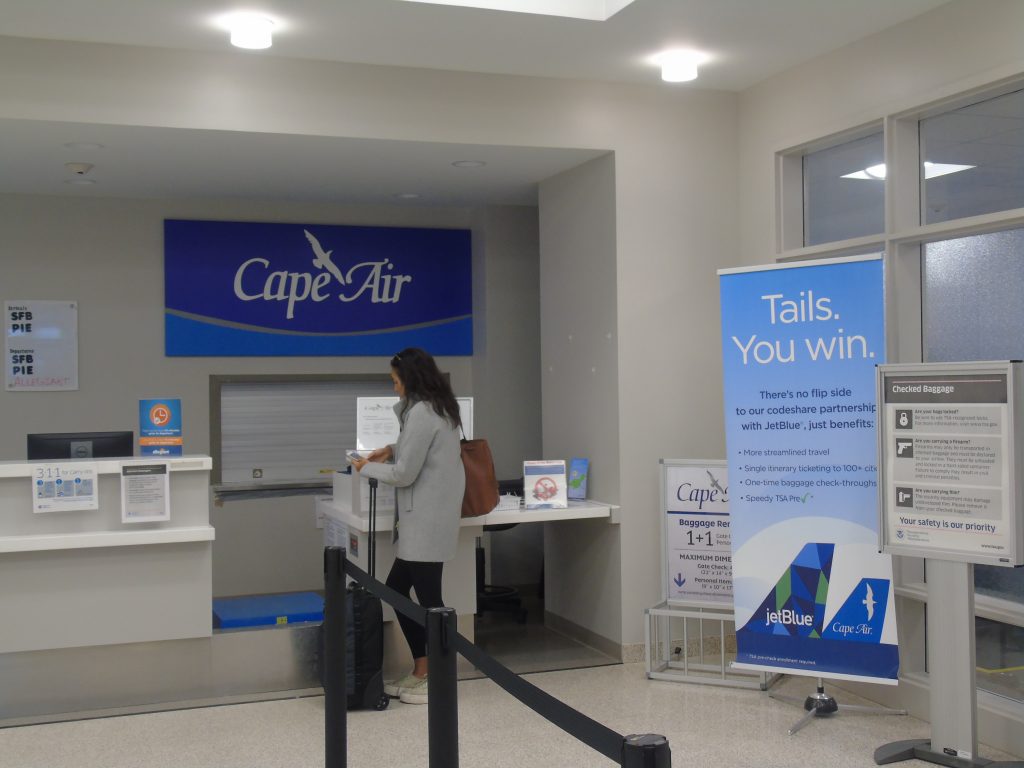 On the ramp, a SkyWest boarding ramp joins Allegiant’s that’s used for its Airbus A320 family flights to Florida.  Despite the CRJ-200 offering built-in boarding stairs, the ramp is used for boarding passengers in a wheelchair or with disabilities. 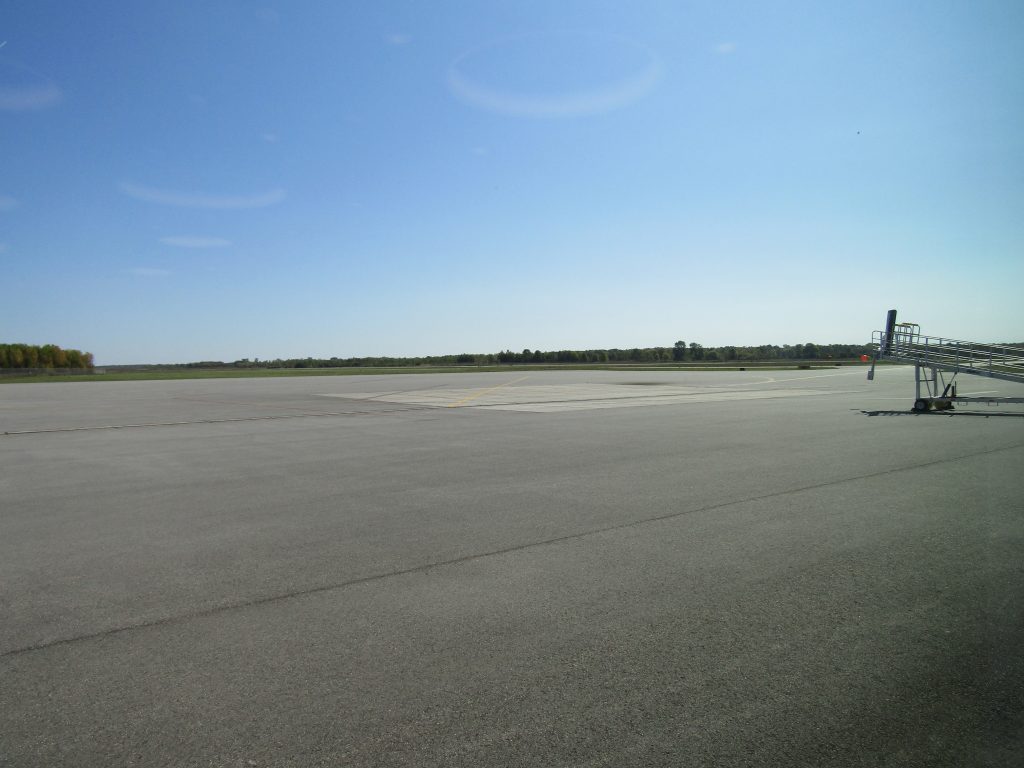 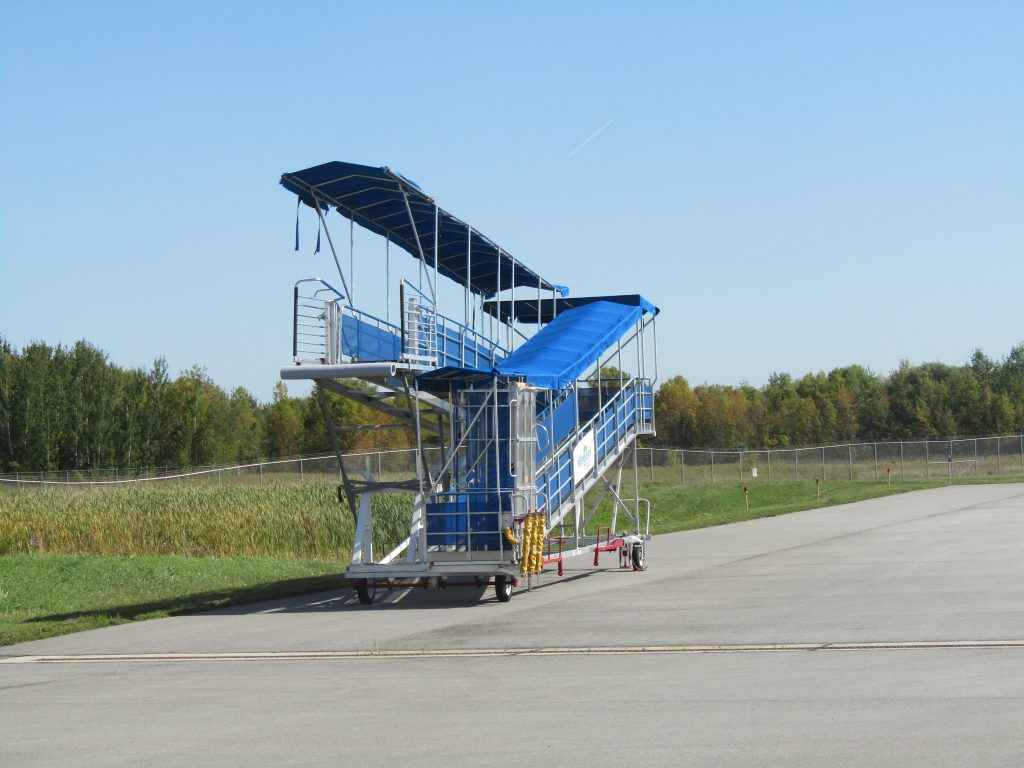 When Cape Air left, Ogdensburg International Airport transformed into an all-jet aircraft airport overnight, greatly increasing capacity to the town as the 50-seat CRJs replaced the 9-seat Cessnas. Travelers could now fly straight to airline hubs instead of having to take a flight to Albany and then to points onward.

In between flights, the one-story terminal is deserted. While Cape Air’s ticket counter was reportedly staffed all day, United and Allegiant’s counters were barren at 10 in the morning. Transportation Security Administration officers don’t even staff the checkpoint all day long. 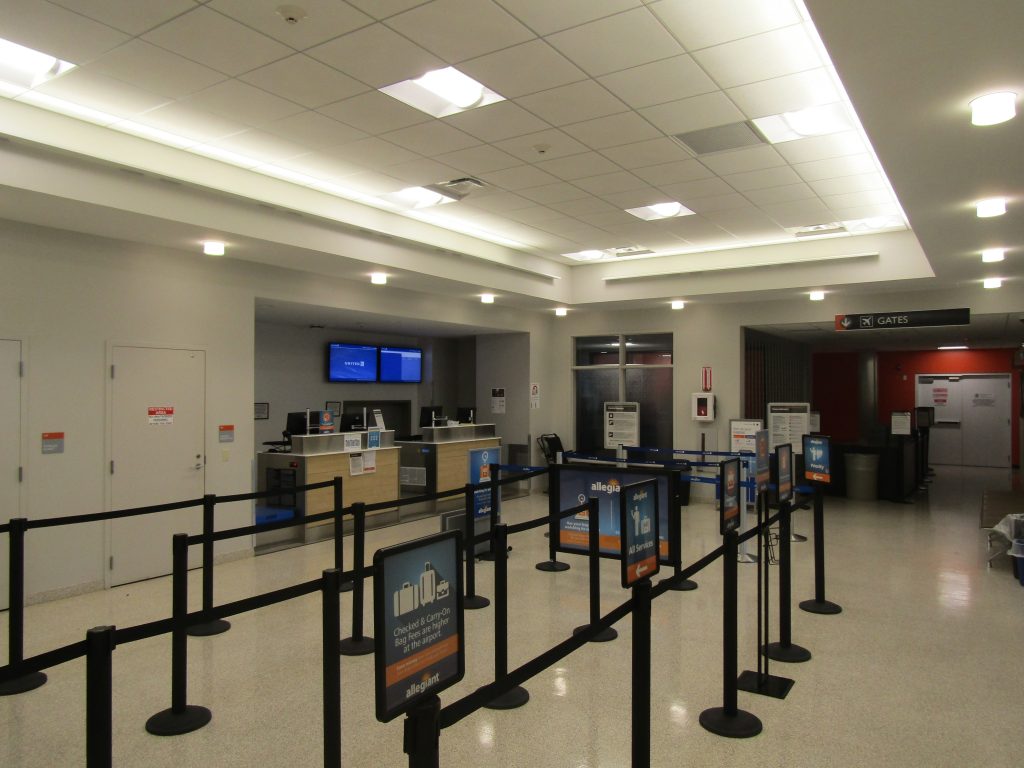 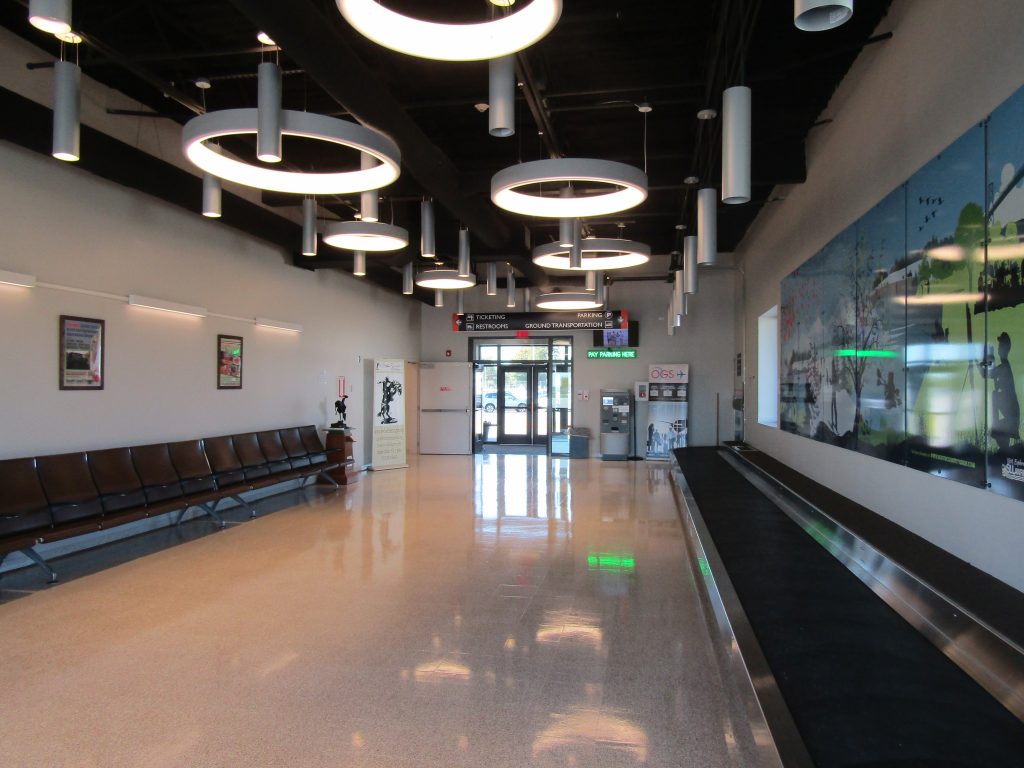 In Albany, Cape Air was forced to close its passenger operation, leaving Gate 1A dormant for the time being. However, the airline still maintains a maintenance facility there alongside CommutAir. When Ogdensburg went, the airline lost two routes, Boston-Albany and Albany-Ogdensburg, severing the only direct connection between the town and its state’s capital.

While North Country New Yorkers may have benefitted from SkyWest’s arrival, another region did as well, Canada. AirlineGeeks recently detailed how Canadians are crossing the border in search of cheaper flights thanks to the lower taxes levied on domestic flights rather than international flights and that trend is exemplified in Ogdensburg. 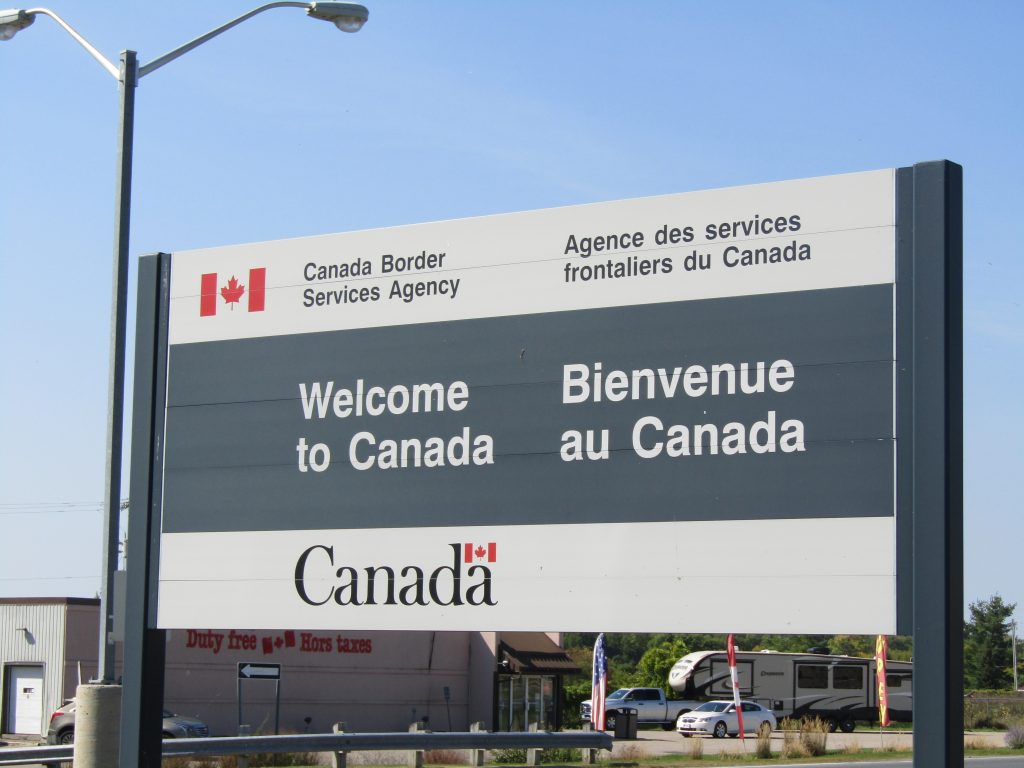 The Prescott Border Crossing is the primary point of entry to Canada for travelers arriving in Ogdensburg. (Photo: AirlineGeeks | Tom Pallini)

At the Ogdensburg-Prescott International Bridge which connects the U.S. with Canada – owned and operated by the Ogdensburg Bridge and Port Authority, which also owns and operates the airport – one can see advertisements for the airport, encouraging Canadians to utilize the airport to save money. The main target is Ottawans, who can potentially save hundreds on flights by driving an hour south to Ogdensburg and paying the bridge’s small toll. 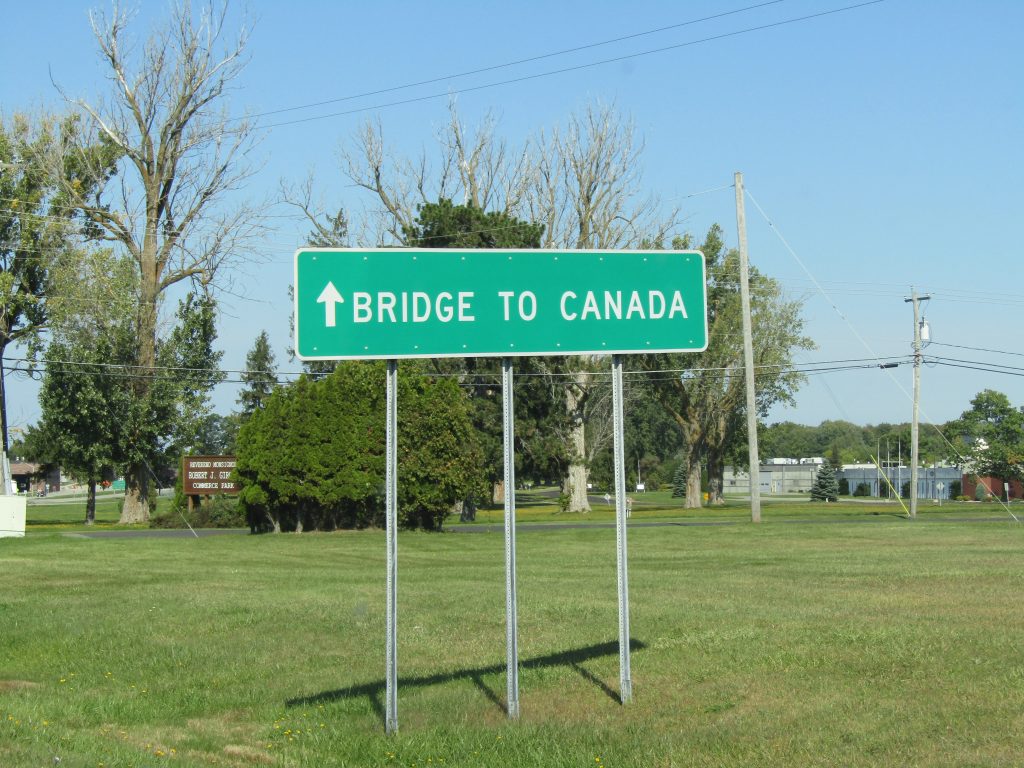 The End of an Era

While major airports see airlines come and go on a near-daily basis, the impact an airline has on a small-town is often much larger, as seen in Ogdensburg. Cape Air was an example of how an airline can become integrated into the community it serves, with the airline opening a ticket office, which are virtually non-existent in the U.S., in town.

With the airline’s disappearance from Ogdensburg, the town lost a community ally, but the region is now better connected.