Qantas launched its first research flight on Friday departing from New York’s John F. Kennedy International and flying nonstop to Sydney’s Kingsford Smith Airport, the first flight ever to do so, as part of its Project Sunrise. The ultra-long-haul test flights are the first stage in the project that is set to end with the launch of nonstop passenger flights between Australia’s East Coast and New York and London.

In coordination with the University of Sydney, the research flights from both New York and London to Sydney aim to test the effects of such an enduring airborne journey on the passengers onboard. Both passengers and crew will be wearing monitors to track their vitals and brain activity during the flight. With so few flights of this duration, it’s important to know the best practices and if the time saved is worth the strain.

The aircraft used for the historic first flight was a newly-delivered Boeing 787-9 Dreamliner. With only 50 passengers and crew onboard with minimal luggage and no cargo, the Dreamliner is able to perform the flight with relative ease, departing with a full load of fuel and still having about 90 minutes of reserves upon landing in Sydney.

The most recent Dreamliner to be delivered to Qantas, the aircraft made the pit stop in New York on its way home to perform the flight. When it arrived in New York, the aircraft only had 11 hours on its odometer having been flown from Boeing’s facility in Everett, Wash. to Qantas’ U.S. maintenance facility in Los Angeles, then making its first transcontinental journey to New York to conduct the flight.

Receiving a trial by fire, its third flight with a Qantas callsign saw VH-ZNI embark on a 19-hour and 16-minute flight that departed New York on Friday night and arrived in Sydney on Sunday morning local time.

In the months leading up to the flight, Qantas flight dispatchers had checked numerous flight plan routes to determine the most efficient for the flight. In the end, the route chosen saw the aircraft fly across the U.S. from New York to Los Angeles approximately and then down to Sydney over the pacific. 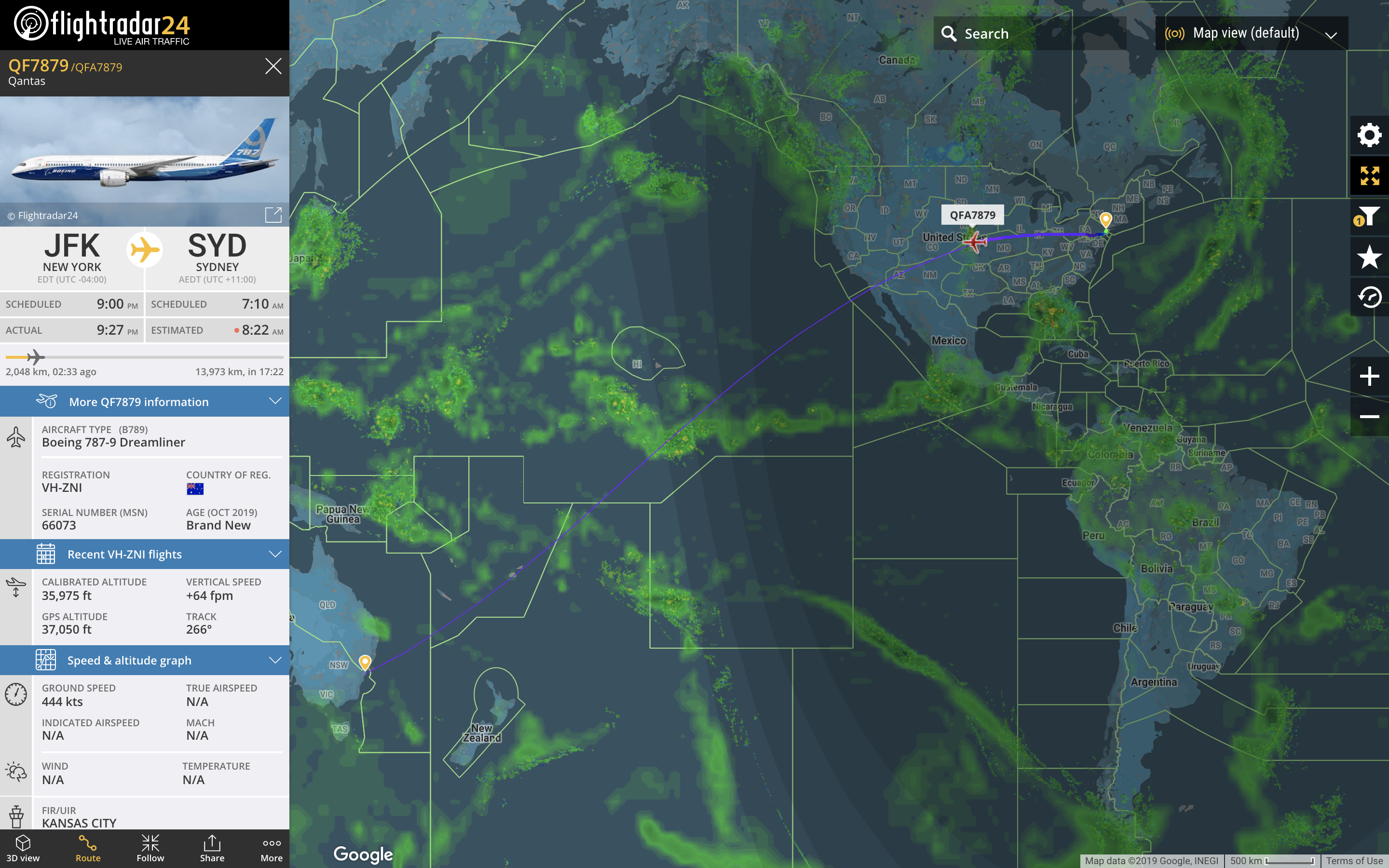 The flight departed in the evening hours of Friday from Terminal 8 at New York’s JFK Airport, where most oneworld carriers depart from including Qantas. Just a few hours after Qantas sent off its daily flight to Brisbane via Los Angeles, it was time for QF7879, the special flight number assigned to the research flight, to head out. 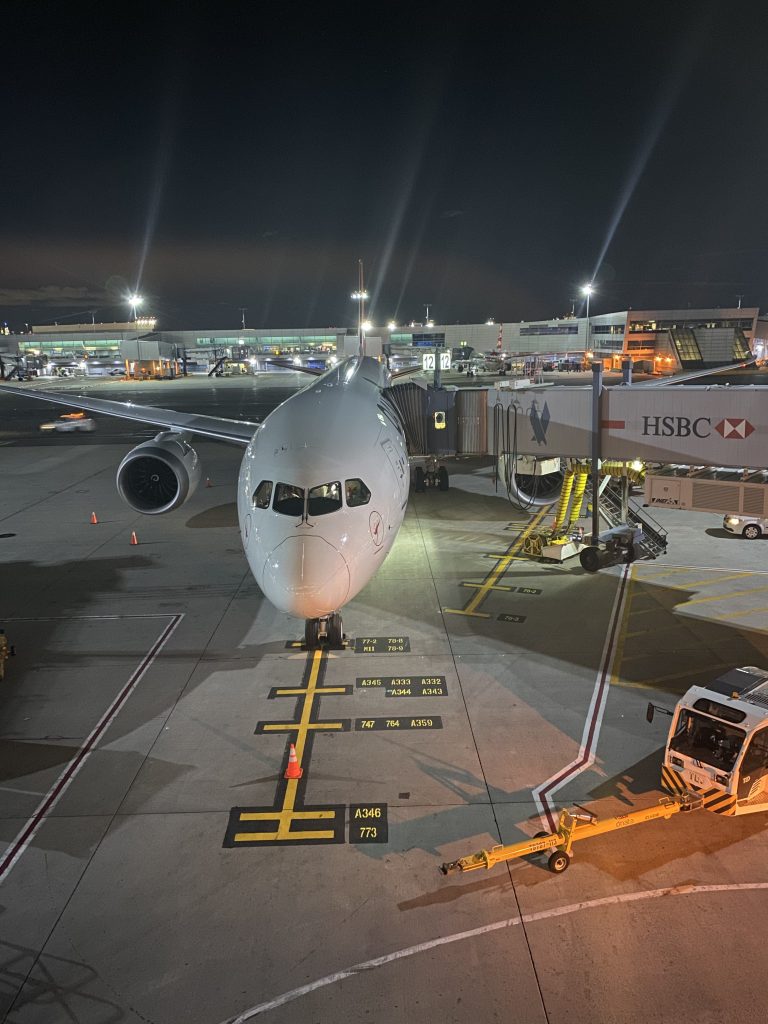 While the aircraft operating the flight had flown in just a few hours earlier, most of the passengers onboard, a special group primarily consisting of Qantas employees and researchers, were in New York a week in advance to prepare for the flight. The day prior, passengers underwent a briefing where they were given tips on how best to endure the flight.

For the special flight, a special gate was used. In Terminal 8, Gate 12 not only is the closest gate from the security checkpoint but is also American Airlines’ honor gate where its honor flights and yearly Snowball Express flights depart from. American flags and the flags of its armed forces surround the gate area, as well as historic documents and photographs from America’s military past. 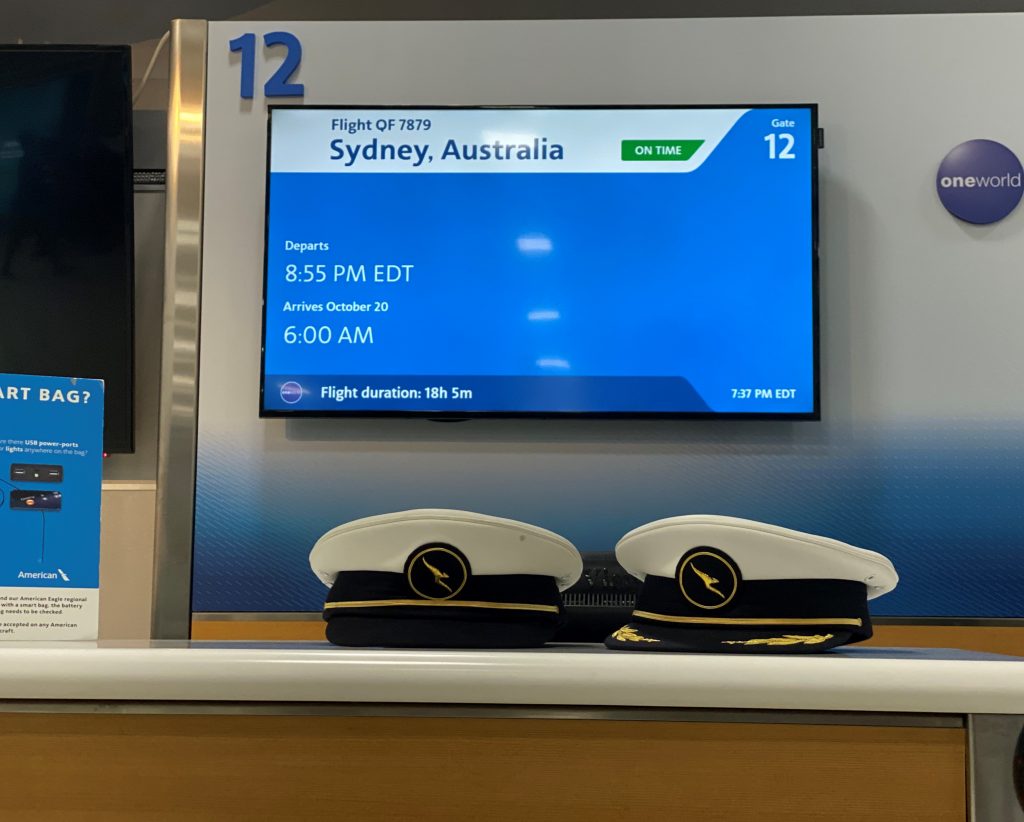 Just before 8:00 p.m., an hour before departure, the flight crew consisting of four pilots and six flight attendants made their way onto the aircraft to prepare for the journey ahead. As they arrived at the gate, countless passersby stopped to inquire about the historic flight. Even airline staff from other terminals came to see the flight at the gate, comparing it to when the Concorde first arrived. 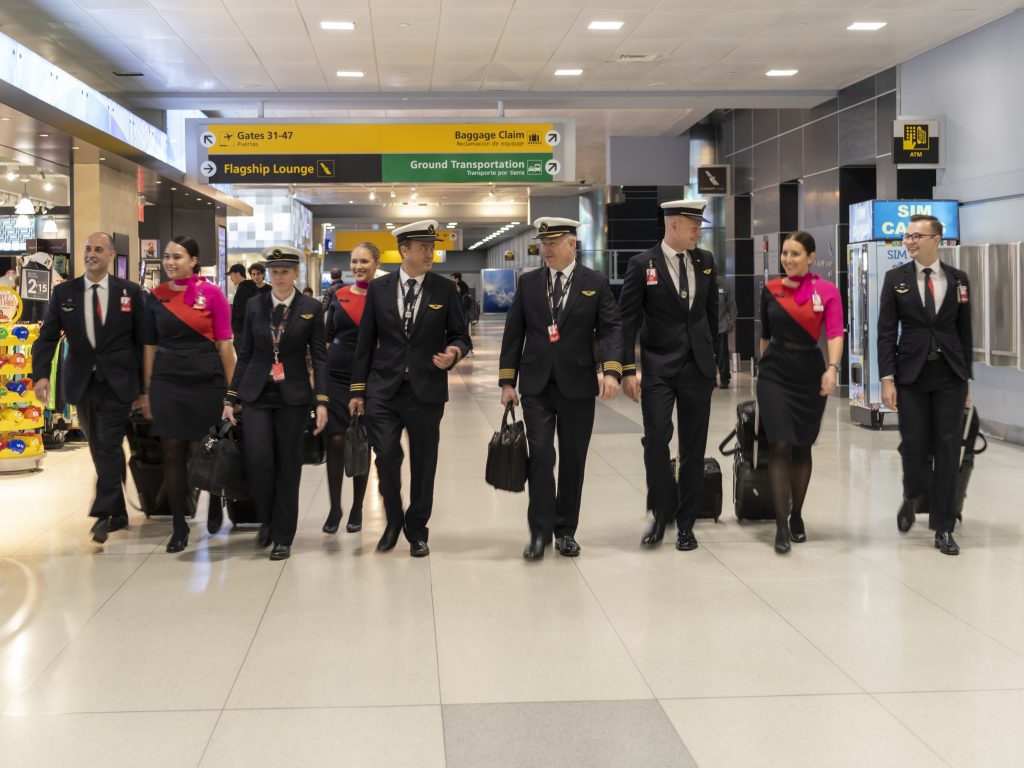 The crew of QF7879 walking through Terminal 8 to their gate. (Photo: AirlineGeeks | Vincenzo Pace)

Even though this was merely a test flight, it was an inspiring moment not only for the aviation community but for even the most casual traveler. In an era of airline bankruptcies and aircraft retirements, it was heartening to witness the excitement that a simple research flight could bring about for all involved. 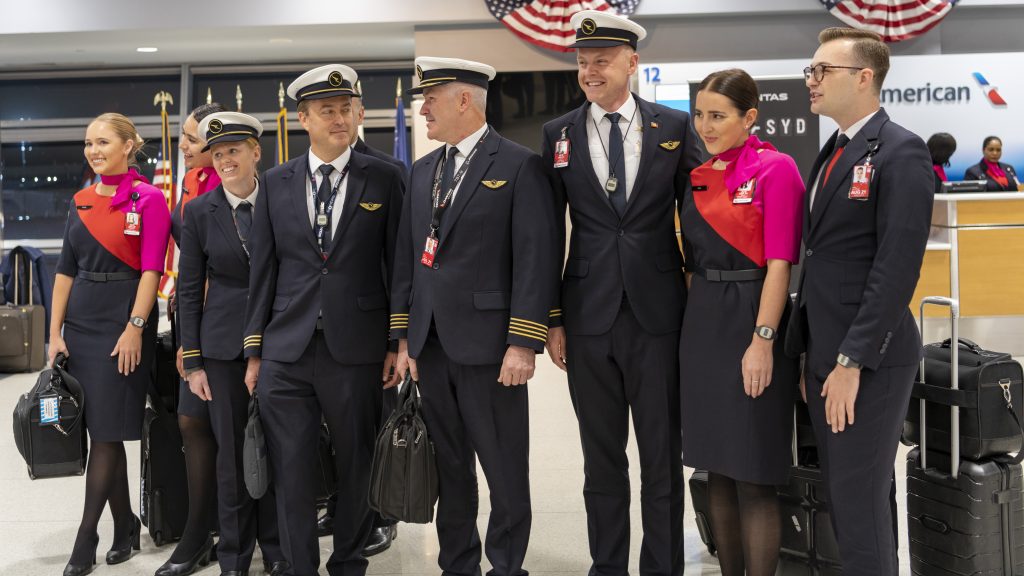 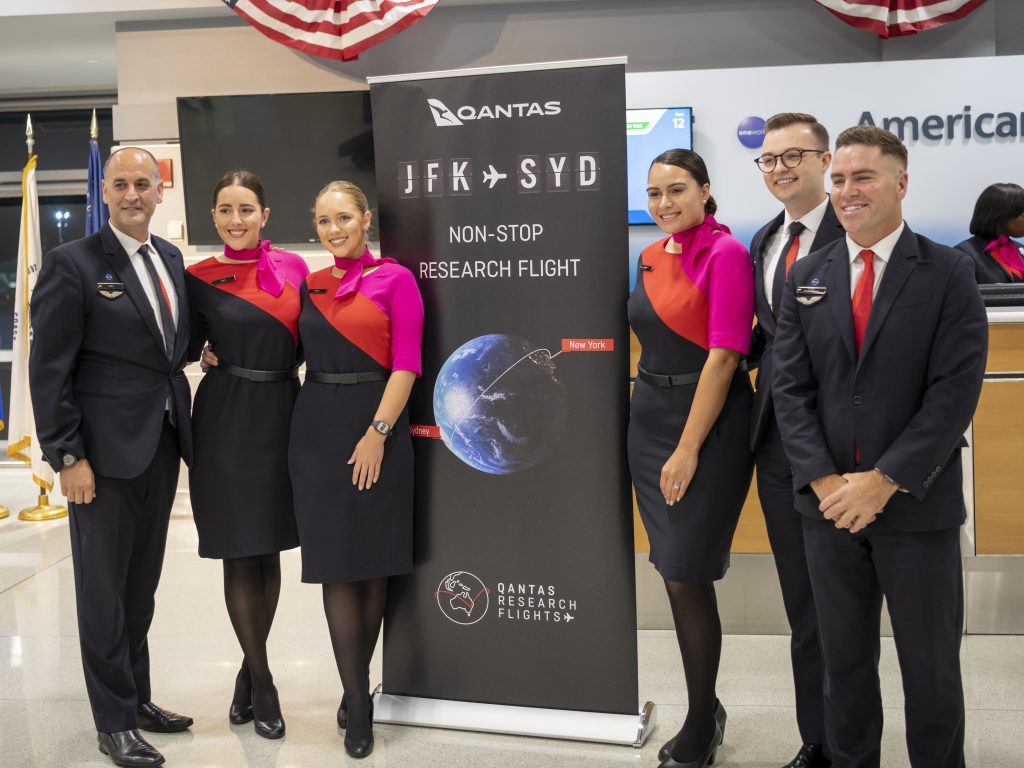 Once the crew settled in, it was time for the passengers to board the aircraft and head to the Land Down Under. Qantas CEO Alan Joyce was first onboard for the historic flight, followed by the remaining passengers and media. With 42 seats in business class on the Dreamliner, all onboard were able to relax in a lie-flat seat, though there was an abundance of empty economy rows. 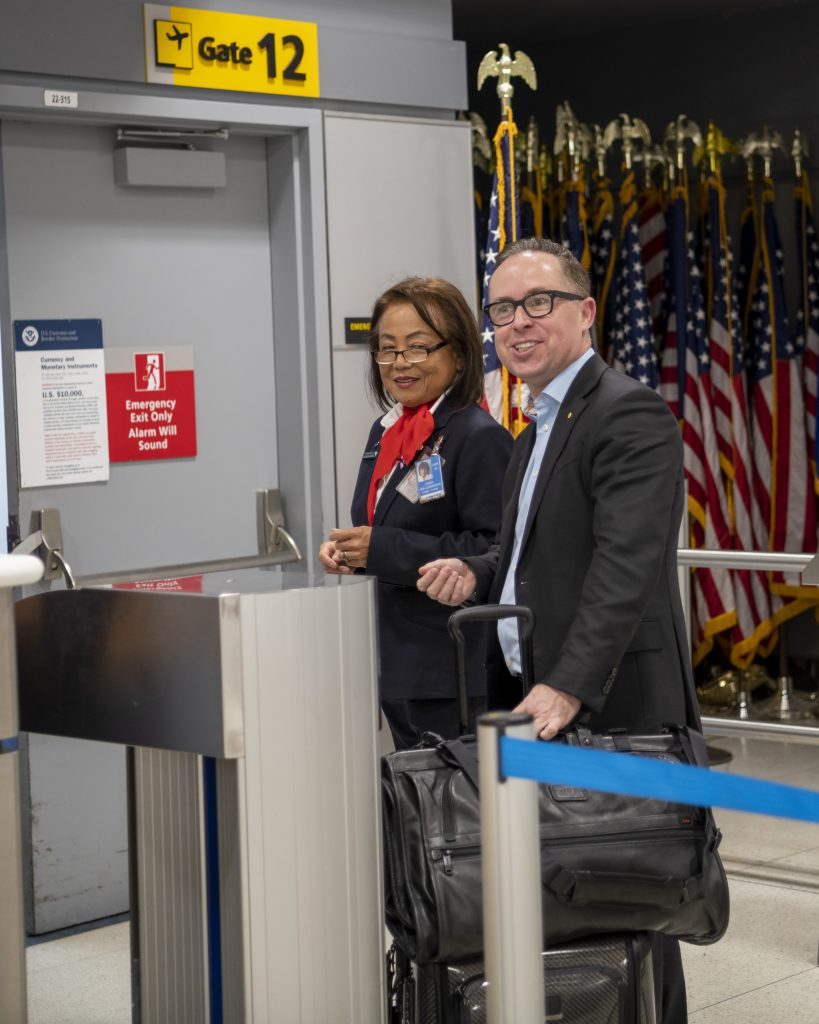 Once loaded, the Dreamliner received the first-ever air traffic control clearance from New York to Sydney and pushed back from Gate 12 just after 9 p.m. With 233,000 kilograms onboard, 101,000 of which is fuel, QF7879 then taxied to Runway 31L where it departed into the evening sky enroute to Sydney.

The Quest to Stay Awake

While some may see the 19+ hour flight time and think the best way to conquer it would be to head to sleep straight away, they would be wrong. Travelers on the flight were briefed on the best way to survive the flight in order to adapt to Sydney time and arrive refreshed and well-rested, which oddly meant staying awake in the beginning.

Even though the flight departed at 9 p.m. in New York, researchers found that it would be more beneficial for passengers to stay awake for at least six hours before nodding off. Although that would mean staying up until 3 a.m. New York time, it would ultimately mean better adjusting to Sydney time.

While staying awake for six hours at that time of night is not easy, especially when on an airplane, the travelers won’t be going it alone. In addition to the in-flight entertainment options offered which help keep passengers awake, they’ll also have some help from the chef.

Partnering again with Neil Perry, Qantas designed special menus for the flights that aid in both keeping passengers awake and helping them gently drift off to sleep when the time is right. For the research flight, that means spicy dishes for dinner to keep the body awake.

The catering, however, isn’t just for controlling the sleep times of one’s body, it also provides travelers with light and healthy meals to make the flights more enjoyable and reduce the overall strain of being airborne for so long. On this flight, only around 100 meals were loaded for the 50 passengers and crew.

Qantas will ultimately provide guidance on how best to tackle the flight but, of course, it’s up to the individual passengers to comply. For instance, while consuming alcohol may make one fall asleep before the six hours are up, the airline will, of course, have it onboard.

While the passengers on this flight are expected to be test subjects, they aren’t immune from the desire to indulge while onboard and were given an allowance of one glass of wine.

The next research flight will depart from London, where Qantas currently operates the first and only nonstop link between Australia and the United Kingdom, later this year. The London-Sydney route is approximately 500 miles longer than New York-Sydney, but that flight has been done before, also by Qantas.

30 years ago, a newly-delivered Boeing 747-400 enroute to Sydney again took the long way home, stopping in London to perform the epic feat. While nobody was thinking Project Sunrise could be possible back then, as the Boeing 747-400ER could only get as far as Dallas/Fort Worth from Sydney, the flight made history as it flew over 20 hours between London and Sydney.

Now, Qantas is retiring its Boeing 747s and the two aircraft in the running for Project Sunrise are the Boeing 777X and Airbus A350 XWB. While the Dreamliner was the first to perform the historic flight and will perform the remaining research flights, it likely won’t perform any of the actual sunrise flights.

Arriving in Sydney on Sunday morning, the crew and some passengers reported feeling refreshed and undaunted by the monumental task they just completed. Having proved that it can be done, arguably the hardest part, the task now falls to the manufactures to get an aircraft that can do it consistently.