One month after having its first Embraer E195-E2 delivered, Azul started commercial flights with the new generation regional jet on Thursday, making a roundtrip between its hub in Campinas and Brazil’s capital city of Brasília.

PR-PJN, named “Sou Azul” and still the only E2 in Azul’s fleet, was designated to operate flights AZU9290/9291 VCP-BSB-VCP, only for media, airline executives and guests. In Brasília, an event was undertaken to celebrate the new addition to the fleet. AirlineGeeks was invited by the airline to participate in the trip.

After arriving from a short hop from my hometown Porto Alegre, operated by an Embraer E195 of the old generation, it was time to check-in for this special flight. We went to a special line in Campinas’ check-in area and quickly I had my boarding pass for both flights in hand.

Some 40 minutes before the scheduled departure, the Azul executives arrived at the gate and boarding was started. Our flight was not even near its full capacity, with less than 100 of the 132 available seats occupied. 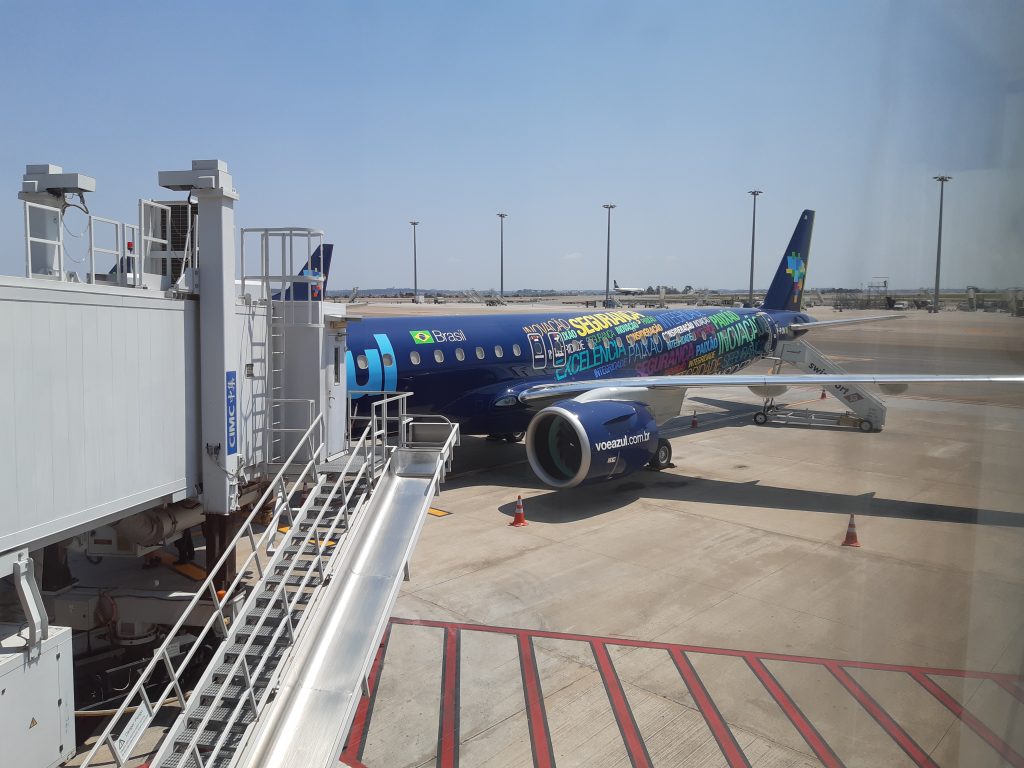 At 11:04 a.m., four minutes after the scheduled departure time, pushback was started and the much-awaited moment arrived; the pair of Pratt & Whitney PW1900Gs came to life. They were actually very silent.

In no time we were ready to go, and at 11:17 a.m. we took-off. The most talked topic between passengers of the flight was the silence of the engines, even at full thrust.

As soon at the seat belt sign was off, the “party” started. John Rodgerson, CEO of Azul, went to the front of the aircraft — as he always does — to talk to the passengers. Afterward, he helped serve Azul’s snack and drink service. 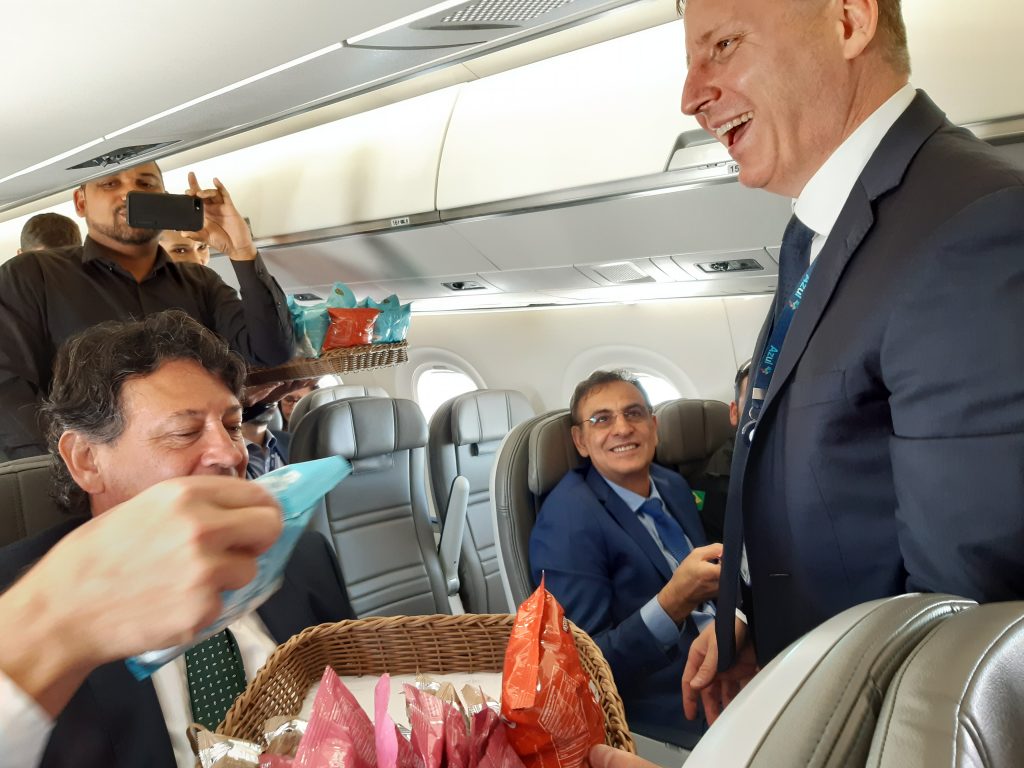 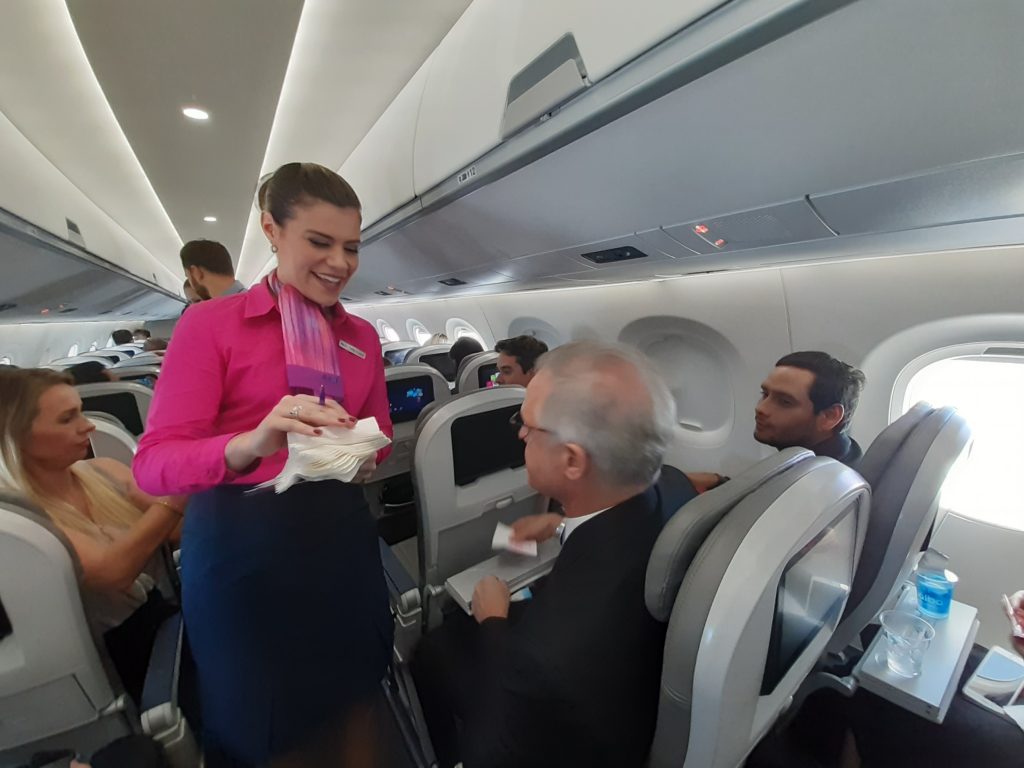 An Azul flight attendant in a pink uniform serves the passengers. Since 2010 Azul has been a supporter of the Pink October movement. (Photo: AirlineGeeks | João Machado)

After the catering service ended, coffee was served. A big confraternization feeling was around; since most of the media guests knew each other, which generated lots of happy discussions and talks, which even made us forget the personal entertainment screens.

The entertainment system is the same offered on the airline’s A330neo; big touch-sensible screens with streaming service and games. As of yet, Live TV is not offered. Even though I was not in my seat for most of the flight, I put my screen to show the flight map so I could track it. We were cruising at an altitude of 28,000 feet only. 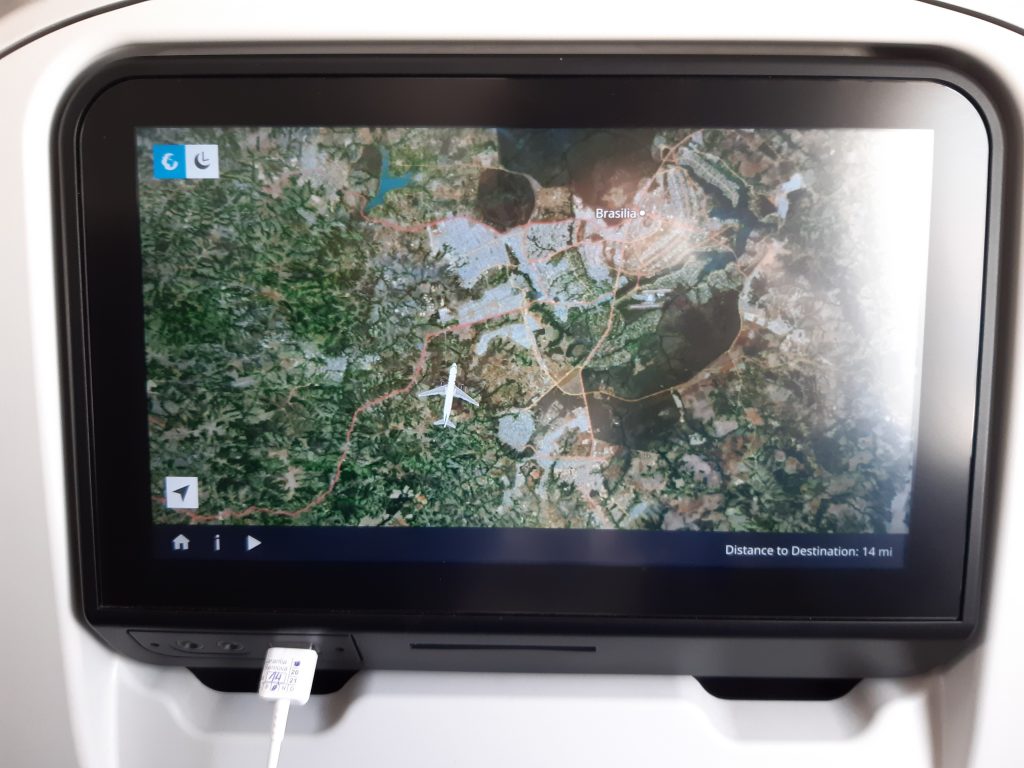 The screen size is a huge evolution when compared to the airline’s old E195s. (Photo: AirlineGeeks | João Machado)

Another big evolution, when compared to the old generation aircraft, are the wings. The design of this part of the E2 was so efficiently made it doesn’t require winglets anymore. This can be seen by the much bigger, clearer wing flex. 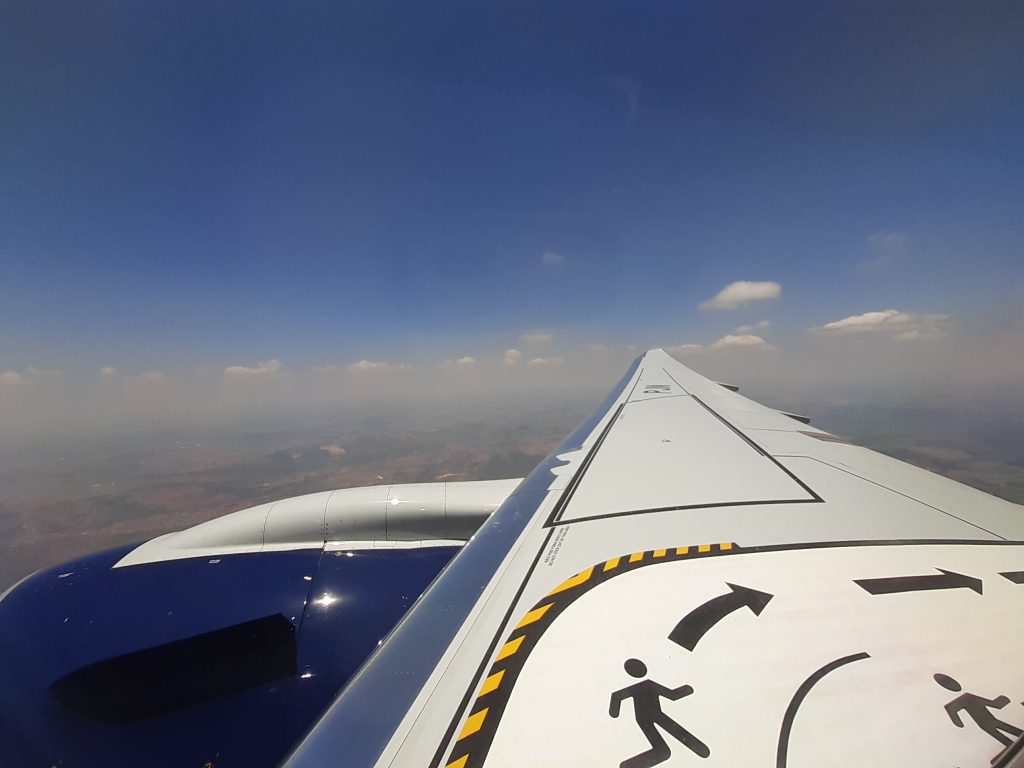 The bathroom is also different when compared to the standard lavatory. It’s more modern, better illuminated.

What has not changed in Azul from the E1 to the E2, though, is the seat pitch. It is still rated “B” by the Brazilian Civil Aviation Authority.

The cabin is divided by the front “EspaçoAzul” seats, with more space for the legs and a blue headrest, and the normal seats, with grey headrests. Seats are very comfortable and are made of leather. 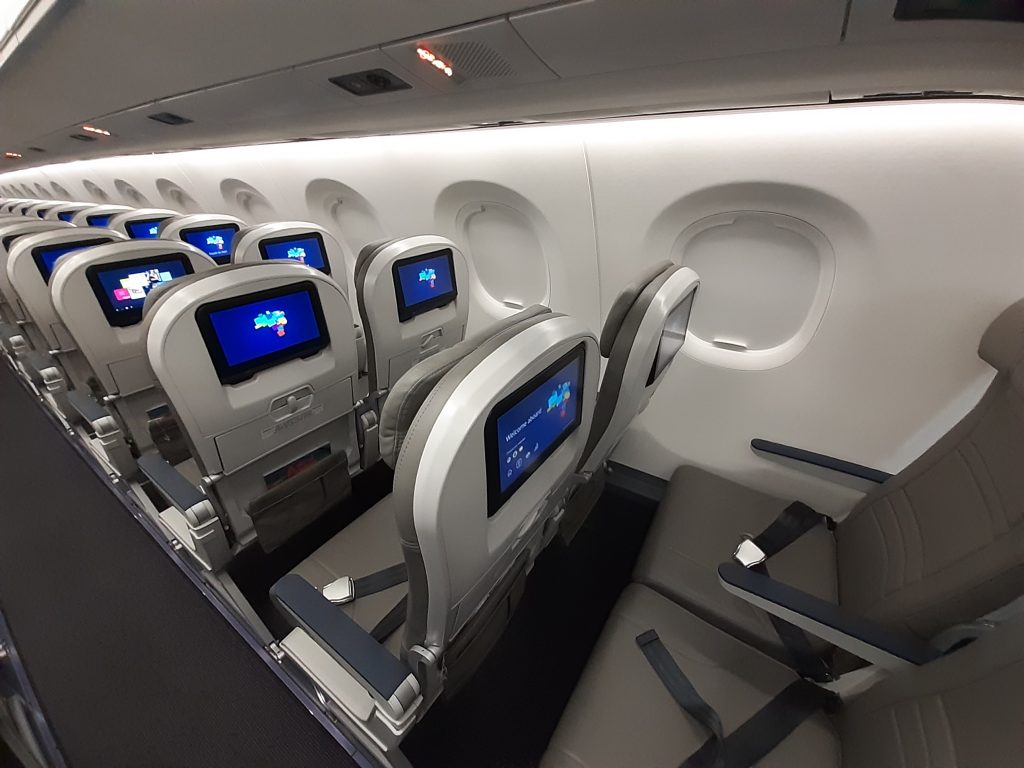 Screens are really big for a domestic aircraft and a huge evolution when compared to the E1 generation. (Photo: AirlineGeeks | João Machado)

The flight was really smooth, the only turbulence we faced was upon arrival in Brasília which, according to a pilot instructor from the airline, is quite common. Soon we were descending to the Brazilian capital. 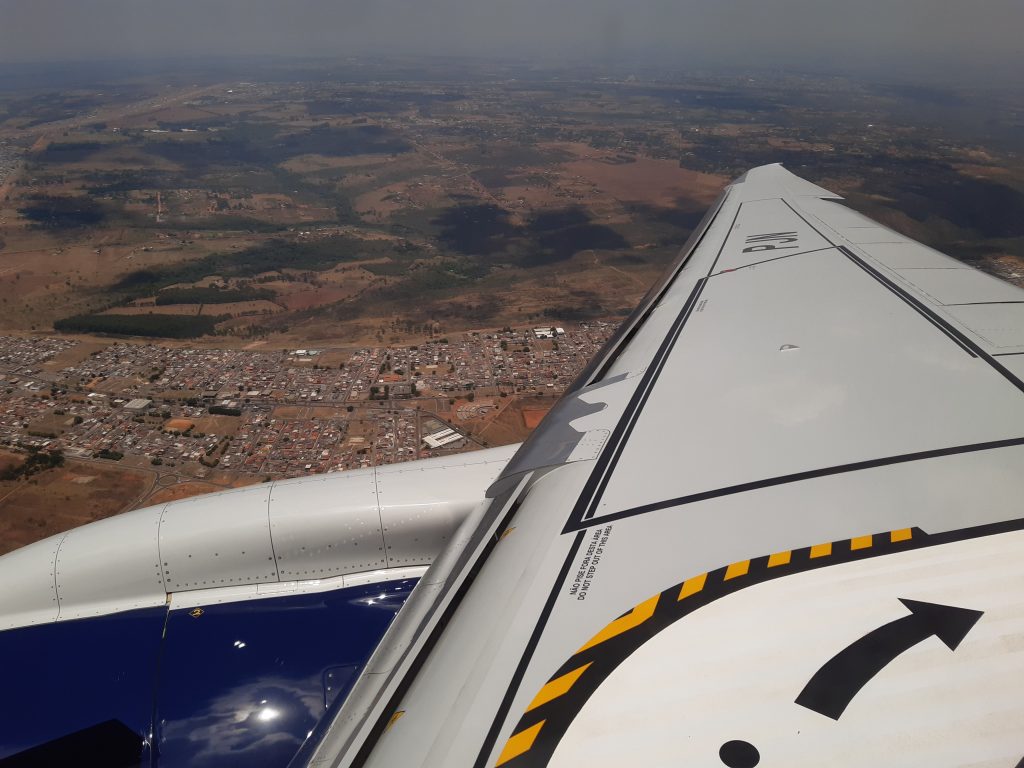 Since we were not in a high altitude, it was quick, and at 12:33 p.m. we had landed at Juscelino Kubitschek International Airport. After a very smooth landing, passengers celebrated with a round of applause; also, Brasília’s fire department recieved PR-PJN with the classic water cannon salute at the gate.

After that, media was taken to a burger restaurant in the terminal. We lunched with John Rodgerson, CEO of Azul, and Abhi Shah, Azul’s Chief Revenue Officer, which talked with us about the new aircraft and things to come until the end of the year.

Afterward, an event was undertaken in a private area of Brasília Airport, which presented the E2 to the Federal Government. Brazil’s minister of Infrastructure, Tarcísio Gomes de Freitas, and Brazil’s Chief of Staff, Onyx Lorenzoni, were among the presents.

The executives and politicians then celebrated by spilling champagne in the brand new aircraft. 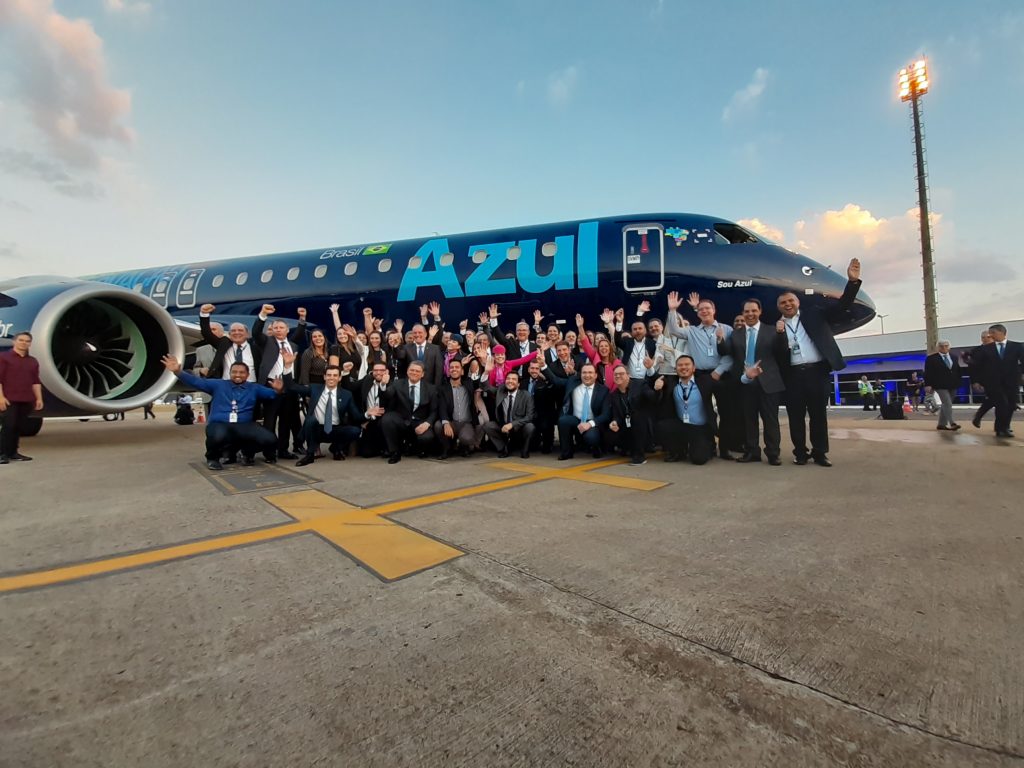 As the night fell, the return flight to Campinas was operated, with an even bigger feeling of confraternization, now the event in Brasília had been a success.

With this short flight experience, it’s possible to say that with the E195-E2, Azul not only maintains a very good flight experience; it also enhances it, with a much more modern, quieter and comfortable aircraft. Allying its very solid domestic catering to the new entertainment system, Azul has everything to offer to be the best domestic product in Brazil.