Azul Brazilian Airlines continued its fleet renewal last week when it received its first Airbus A321neo, the first of an order of 13. The aircraft, with a capacity for 214 passengers in a single-class configuration, is Azul’s largest narrowbody and second A320neo family aircraft.

More than just being the delivery of a new airplane, though, the arrival of Azul’s first A321neo represents a landmark of a process the airline has been undertaking since 2016: the development of its ambitious fleet plan.

From its first flight in 2008, the airline relied solely on the Embraer 190 and 195 to position itself in the Brazilian market until 2011 when the ATR 72 came into play. Benefitting from the then-empty Campinas/Viracopos Airport as a hub, Azul quickly grew as Brazil’s third-largest carrier in terms of traffic.

Little by little, however, the Embraer fleet started showing its shortcomings. Although having a smaller capacity than the Airbus and Boeing aircraft that its competitors operated, the aircraft lacked efficiency. This was even more evident on larger flights. Brazil is vast, and Azul found it very difficult to operate longer flights with the Embraer in an efficient way.

That’s why in November 2014, with Brazil on the edge of an abyss that would show the biggest recession in the country since 1929, Azul made a big gamble, ordering 63 Airbus A320neos. The first one arrived in October 2016, starting operations that following December. 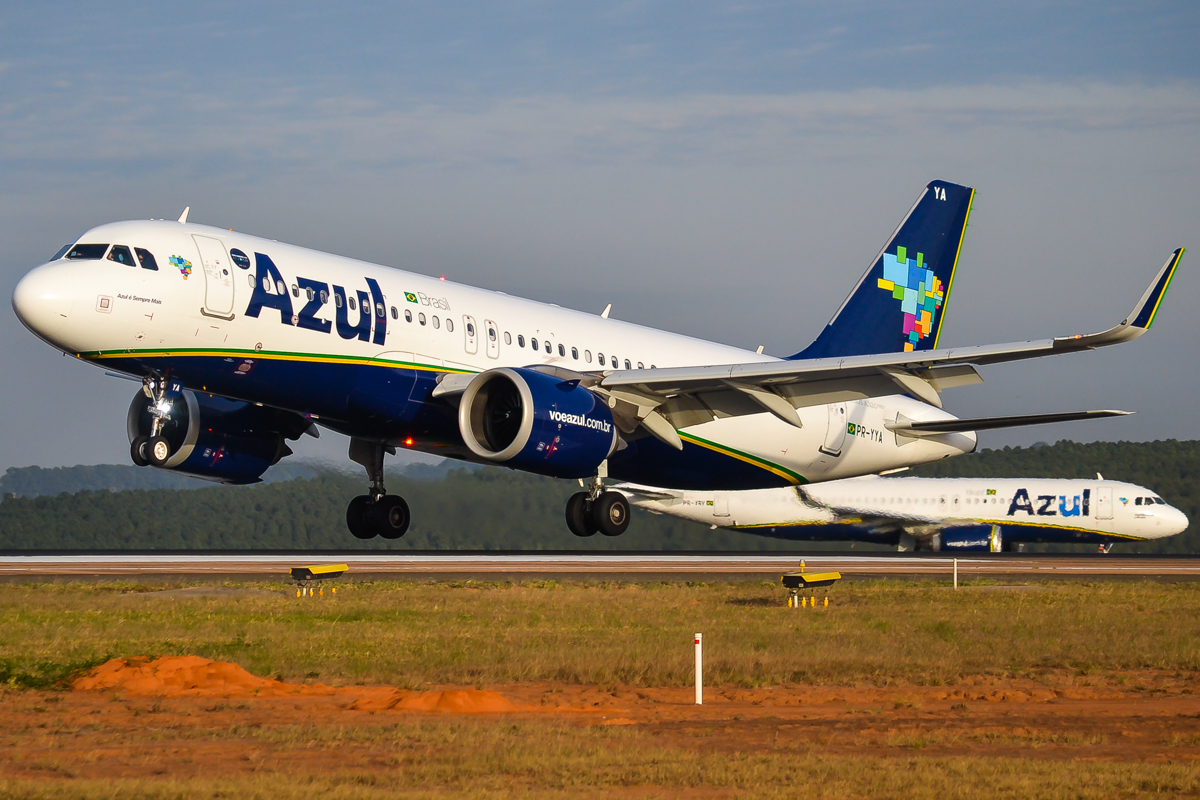 Abhi Shah, Azul’s Chief Revenue Officer, stated on a conference call, “We could not have started Azul with large narrowbodies 10 years ago; but now we have built a network that has enough feed and enough traffic that can fill Neos and so we are going to get the double benefit of improved fuel burn [of the A320neo] and more economies of scale.”

This can be seen by the current routes served by Azul’s A320neos. The aircraft mostly connects high-density routes from Azul’s strongest markets to major Brazilian cities, as well as connects the carrier’s hubs — Viracopos, Confins and Recife — plus focus cities — Belém, Cuiabá, Curitiba, Goiânia and Porto Alegre — to each other.

Apart from these, a big chunk of the routes connects the airline’s hubs — Viracopos/Campinas and Belo Horizonte/Confins — to cities in the north and northeastern regions of Brazil. Before the Airbus, the airline could not connect these cities with as much efficiency as its competitors. The better unit cost brought by the performance of the A320neo on longer jaunts allow the airline to push further its capacity within these sectors.

The hub-and-spoke system is an important aspect of Azul’s network, so once these routes are connected with a stronger revenue and lower unit costs, all the other flights benefit from that in a kind of a chain reaction. On the investors call for the third quarter of 2018, Abhi Shah stated that “the A320 is driving great connectivity throughout our network and that is helping the smaller routes, the E-Jet routes, the ATR routes.”

Another important aspect of Azul’s new fleet seat cost efficiency is that it makes the airline able to be in a good position when competing directly against LATAM and GOL, with the best example of in Guarulhos.

Before the introduction of the A320neo, Azul had a very small presence at Brazil’s largest airport. From August 2016 to August 2019, the revenue passenger kilometers (RPK ) grew from 131.1 million to 426.7 million, an increase of 225.4 percent. Meanwhile, the domestic RPKs of Azul’s network increased 61.7 percent from 3Q 2016 to 4Q 2019. This means Azul grew four times more in Guarulhos than it has grown in the whole domestic market during the same period.

Azul’s CEO, John Rodgerson, previously stated that “it is important to note that we have put some A320s in the Guarulhos airport because we have the most fuel-efficient aircraft in Latin America today, and with the lowest unit cost and lowest trip cost and its range. So obviously in a more competitive market you are going to put your best-performing asset.” 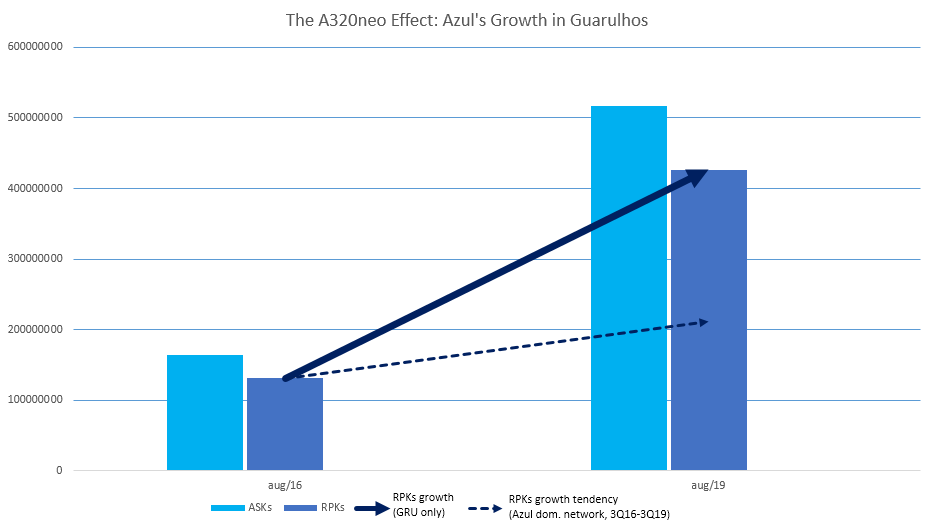 Thanks to the A320neo’s lower unit cost, Azul could finally grow to a proper size in Guarulhos. (Photo: AirlineGeeks | João Machado)

While the Airbus can offer a lower-cost and higher-margins possibility for the airline on denser routes, Brazil is still a country with a very underdeveloped aviation market. This means the lower number of seats on the Embraer 195s is still a very important asset for the airline. Either on corporate routes during off-peak times of the day or on feeder operations to smaller cities, the Brazilian-made jet still is a workhorse for the airline, with 500 flights out of the 900 the airline operates daily.

That’s why the Embraer 190/195 E2, the new generation of the aircraft, comes in handy for Azul. Compared to the E195-E1, the E195-E2 has a 14 percent lower trip cost, while it carries 18 passengers more. In a recent conference call, Azul’s founder, airline tycoon David Neeleman, defined the E2 as “truly a game-changer.”

The strategy is to fully replace the E1s by the E2s as soon as possible and Azul plans to have no first-generation E-jets by 2023. The airline also wants to get the E195-E2 in the corporate markets.

In the same call, one airline executive outlined plans for the next-generation E190 variant adding, “We will start in our hubs, so we have many, many corporate routes flying out of Campinas. We fly to Brasília six times a day; we fly to Porto Alegre nine times a day; we fly to Curitiba 11 times a day. and all of those will get replaced with E2s. Each one of those will have 14% less cost per flight and will have 18 to 30 more seats to sell. So our focus is going to be replacing E1 routes.”

With all these subsequent boosts in the airline’s connectivity, it came as a logical sequence that the airline soon would need the A321neo for high-density operations. There are 12 A321neos ordered by the airline, that swapped from the original order for 63 A320neos.

The plan with these larger aircraft is really straightforward, mentioned Shah in the latest investors call last week: “Just connecting the hubs to each other is going to be the first mission of the A321 and this not only helps the economics of those routes but it helps the economics of all the other routes that connect. So we will be able to drive a lot more connectivity with each and one of those flights than we were before. Similar to what we did with the E1s to the 320s we can now do with the 320 to the A321.”

The main reason that made the airline order the larger A321 is, again, the economies of scale that come with more seats. Abhi explained by saying: “We think that the trip cost of the A321 is just going to be slightly higher than that of the A320 and that with 40 additional seats; so you are going to see additional unit costs leverage for us as we use this aircraft. It could help us lower our unit cost further and given the strength of the network and how broad the network is I am very confident that we can protect the revenue and actually improve revenue across the network with this airplane.”

For the plan to succeed, though, what the airline hopes for is the long-awaited economic stability being back in Brazil. In a country where most of the costs at the industry are dollarized, the Brazilian real has been overly fluctuating. For example, the dollar price jumped from around BRL 3.74 in July to BRL 4.20 in the latest trading day.

Azul should be prepared for a tough competition. While GOL has succeeded in its endeavors to capture the corporate passenger and retake its margins since 2015, LATAM Brasil has started to reorganize itself to also reconquer this very important and strategic segment of the air transport traffic.