As airlines deal with a sharp decline in air travel demand and closed borders, they are becoming creative in finding new ways to keep their aircraft flying. On March 26, Aegean Airlines temporarily suspended its international network until April 30 in an effort to preserve the sustainability of its operations.

The airline will maintain several weekly flights between Athens and Brussels in the meantime to maintain Greece’s connectivity with the E.U.’s administrative center. Additionally, Olympic Air, Aegean’s subsidiary, has committed to continue serving all domestic destinations for the time being, though through limited flight frequencies. This aims to facilitate minimum essential connectivity for the island’s needs. With over 80 percent of regular operations temporarily suspended, like many airlines, the airline was left with no option but to ground the majority of its aircraft.

Despite grounding aircraft, the Athens-based carrier is getting creative in its efforts to help Greece fight the COVID-19 pandemic. While some carriers like Lufthansa have used the passenger cabins of their aircraft to store additional cargo, Aegean Airlines is one of few airlines taking it a step further. The unofficial flag carrier has removed seats from two aircraft to create additional space to fly cargo.

Aegean Airlines is teaming up with Hellenic Petroleum to support the Greek state in combating the crisis. The airline will initially offer up to 10 flights to China or other countries that produce medical and pharmaceutical materials or other necessary materials and equipment. According to Aegean, the airline will provide aircraft, crews and cover other necessary costs for these flights.

On March 29, SX-DND landed in Tianjin to pick up supplies to bring back to Greece. The aircraft made a fuel stop in Kazakhstan at Almaty on the outbound and inbound flight to refuel. While a historic flight for the company, this is not Aegean’s first time visiting China. Former Prime Minister Alexis Tsipras chartered an Aegean aircraft for his visit to the nation in 2016. 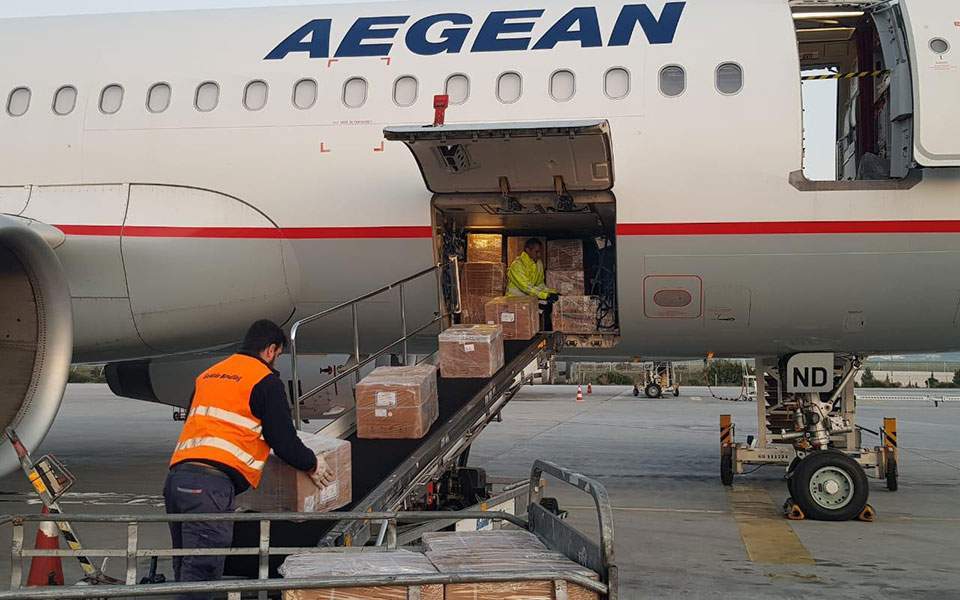 Cargo is unloaded after SX-DND arrived from China on March 30. (Photo: AirlineGeeks)

The first humanitarian cargo flight landed in Athens early in the morning on March 30 with 1.7 million surgical masks and other materials to help Greece fight the COVID-19 pandemic. The Airbus jet is already en route to China again to pick up more supplies.

2020 was poised to be a pivotal year for the Greek carrier. In February, the airline unveiled its new brand identity and onboard product alongside the introduction of the Airbus A320neo into its fleet. Since its inception, Aegean Airlines has been fighting off low-cost competition in a highly competitive and seasonal market. The airline successfully grew during the worst financial crisis ever in a Western country and has earned the reputation of Europe’s best regional airline. While it’s unclear yet how severe of an impact the COVID-19 global crisis will have, the airline has proved in the past it can weather a storm.