Yet another set of U.S. airlines has merged, but unless you live on the island state of Hawaii you probably won’t notice a difference.

On June 4, 2020, the merger between Mokulele Airlines and Makani Kai Air was announced via Southern Airways Express media platforms. Southern Air acquired Mokulele back in Feb. 2019 and decided to keep the Mokulele brand alive in the state of Hawaii. The operations of the two Hawaii-based airlines will begin to combine on June 15, 2020.

Makani Kai Air is a subsidiary of Schuman Aviation, both of which were founded by Richard Schuman. Other companies founded by Schuman include Magnum Helicopters and Hawaii Aviation Services and will not be part of the Mokulele merger.

Talks of the merger began when Schuman reached out to Mokulele CEO Stan Little and suggested, “Maybe we can better serve the Hawaiian people if we team up and do it together.” Little responded, “When we heard Richard’s proposal to merge our companies, we knew it would lead to our being stronger together, plus ensure that we can continue to provide these types of programs for the people of Hawaii when called upon in the future.”

AirlineGeeks had a chance to catch up with Southern Airways Express and Mokulele Airlines Chief Marketing Officer Keith Sisson and ask him some questions about the merger and how they are coping with COVID-19.

AirlineGeeks (AG): How did the airline cope when there were restrictions on island-to-island travel?

Keith Sisson (KS): With the introduction of this travel ban, we [Mokulele] cut our schedule in half in order to serve the essential workers that needed to travel between islands and Makani Kai stopped flying altogether.

(AG): How were employees handled during this significant decrease in demand?

(KS): Mokulele and the parent company Southern Airways did not furlough any employees as a result of COVID. Of course, as demand dried-up, staff hours were reduced. Makani Kai did release all of their employees when the governor announced the inter-island travel ban. The plan is for Mokulele to increase the hours for our employees in an effort to get them to pre-COVID levels as the demand returns and to bring Makani Kai employees back as needed. This process has already begun.

(AG): With the Mokulele-Southern merger you combined the liveries to reflect parts of each carrier in the new combined carrier, will the Mokulele-Makani Kai livery do the same thing?

(KS): No specific livery has been decided upon at this point, but the Makani Kai name will be replaced on the aircraft as planes are cycled through the paint shop. 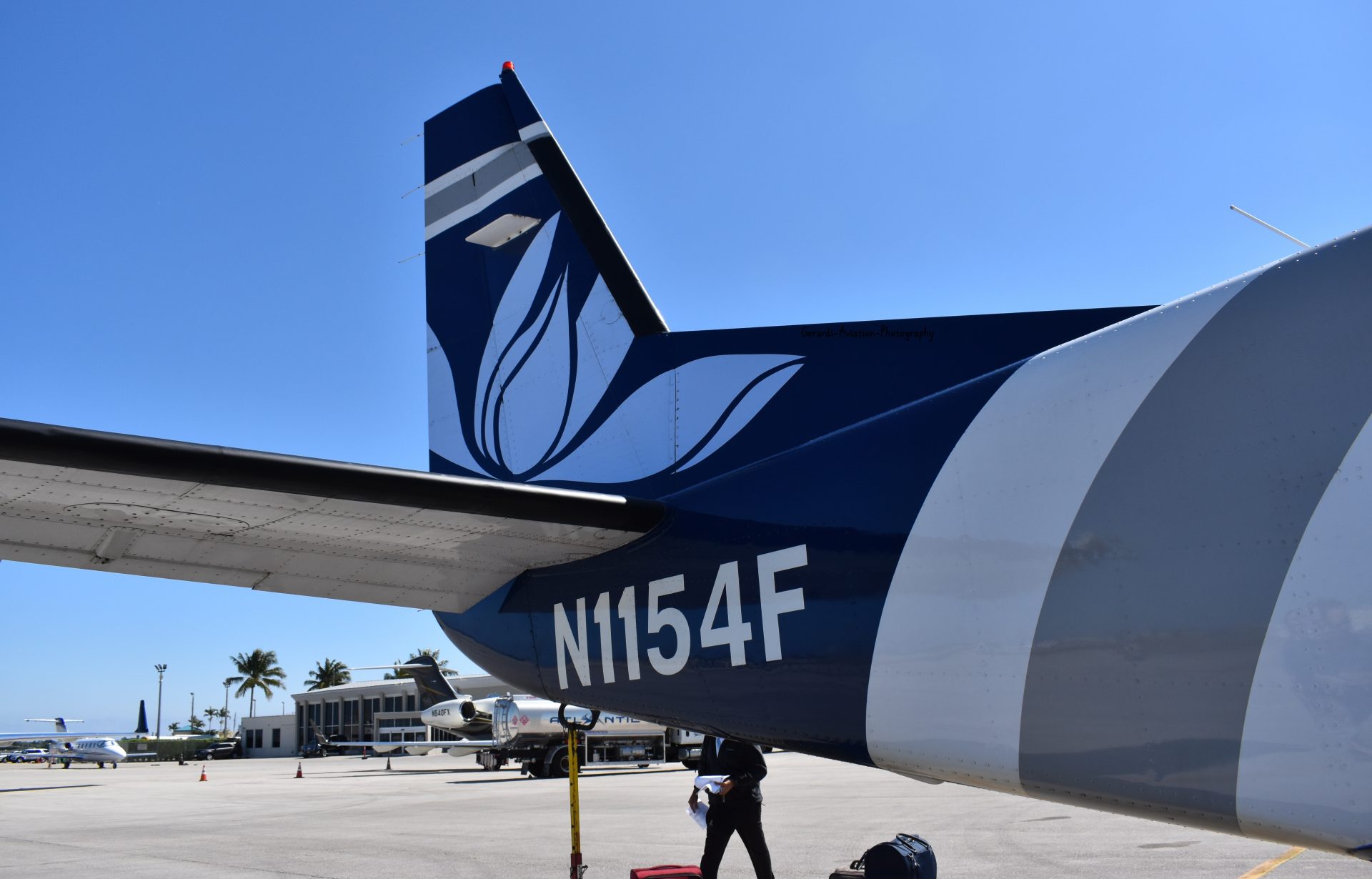 (AG): How long will it take for the Makani Kai aircraft to be painted over with the Mokulele name?

(KS): This is a long integration process. No timeline is set, but I suspect we should have a uniform fleet within a year.

(AG): How will you incorporate the values, ideas, and brand of Makani Kai into the new Mokulele?

(KS): The values of both companies are very similar, we do not see this as a gating issue.

(AG): Does Makani Kai have partnerships or codeshare agreements with any airlines that Mokulele passengers will now be able to utilize or vise versa?

(KS): Makani Kai does not, but Mokulele has American and Alaska.

(AG): Are there any new routes for Mokulele that will come from the merger?

(KS): We wanted to announce a new route at the time of the merger. That route is Honolulu to Lana’i City. Mokulele has served the island of Lana’i for one year with service to Maui, this will be our first service from that island to Oahu. 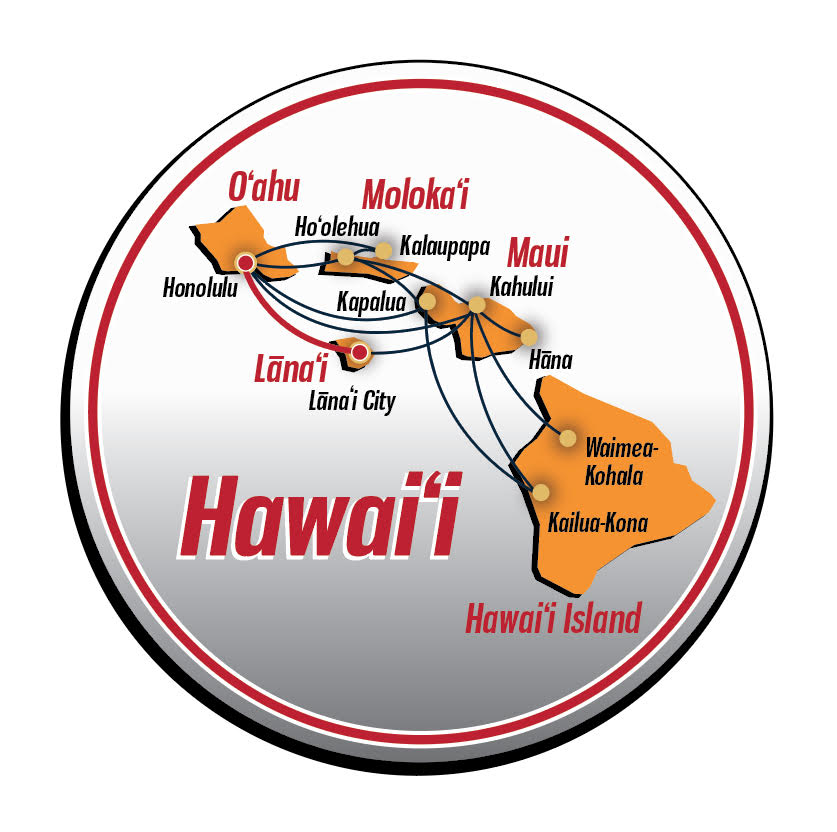 (AG): Are there any cities served by Makani Kai that are not served by Mokulele?

(KS): Yes, Makani Kai served Princeville on the Piper Chieftains. We will look to continue that service from Honolulu and sell interline connections with our partners American Airlines and Alaska Airlines. No timeline on launching that one, it will be based on the demand from the tourists market.

(AG): How will the fleets of the two carriers mesh together in a way that doesn’t inconvenient passengers?

(KS): With the exception of the two Piper Chieftains that will be exclusively used in Princeville, the aircraft of both airlines is almost identical. The passengers should not know any different when flying on each other’s planes.

(AG): Where will the combined airline operate from at airports where you are both flying from?

(KS): Both airlines operate side-by-side at each airport except Honolulu. Makani Kai has a private terminal, which is the nicest facility in the state. Mokulele operates out of Terminal 3 at the HNL [Honolulu] airport. When we begin on June 16 Makani Kai will be operating out of our terminal, Terminal 3. We are asking the state to approve moving the “Terminal 3” designation to the Makani Kai terminal. Once that happens [we] will combine operations to that facility, which is more like a first class passenger lounge than a traditional commuter terminal.

(AG): Is the airline working with the Hawaiian government to promote inter-island travel now that the ban is being lifted soon?

(AG): Obviously due to the virus demand is way down, but eventually will passengers see an increase or decrease in the overall number of frequencies compared to pre-COVID levels?

(KS): We have designed a schedule that can be scaled up as demand returns. We are monitoring future booking trends daily and are ready to plug in additional flights as needed.

(AG): Did your two airlines work together before the virus or is the merger only happening due to the virus?

(KS): We had just started sharing a few passengers with each other just before COVID in an effort to each be more efficient. COVID clearly escalated these efforts to a full merger. As the travel ban continued on, and with a 99-percent decrease in trans-Pacific tourist traffic, it became very clear that the best chance the commuter airline industry has for long-term survival is to pool our resources and create a schedule that is focused on the needs of the communities we serve, rather than the need to compete for peak passengers against each other.

(AG): Do you think that the merger between Makani Kai and Mokulele would’ve eventually come at some point if the virus didn’t occur?

(KS): It is hard to say, but the commuter airline industry [in Hawaii] took a big hit when Southwest aggressively entered the market last year, so it is not at all out-of-the-question. 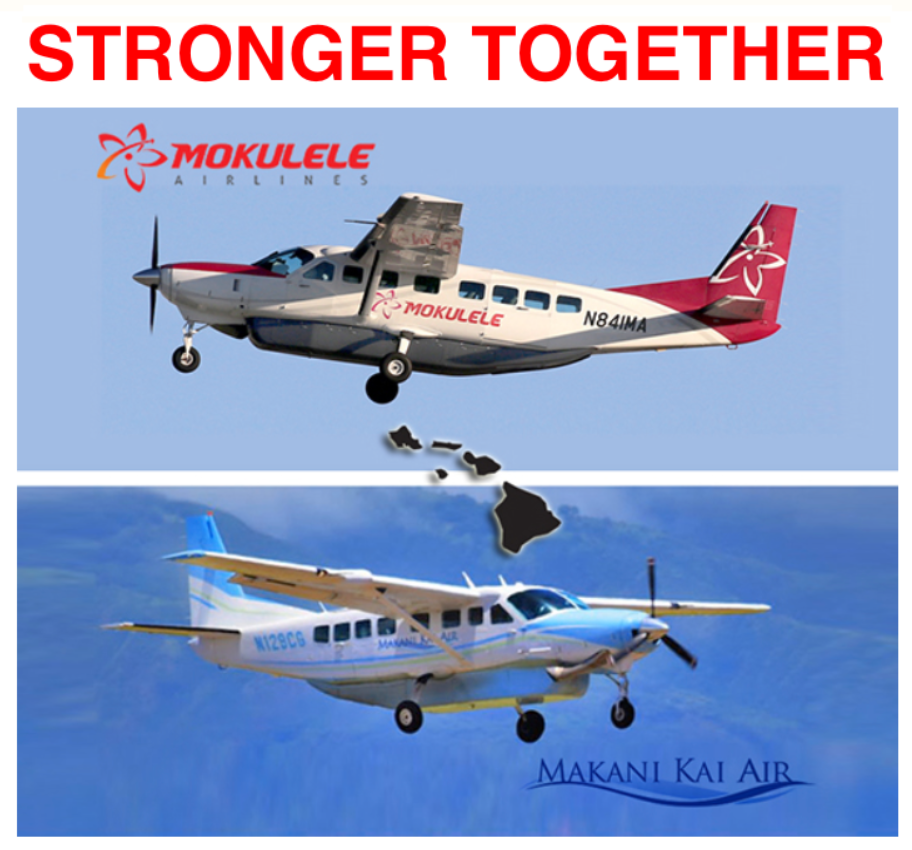 “Stronger Together”, the motto of the Mokulele-Makani Kai merger (Photo: Mokulele Airlines)

The founder of Makani Kai Air, Richard Schuman, has been named the Executive Vice President of Hawaiian Operations for the combined carrier and will oversee all operations within the state.