An American 787-9 landing in Dallas/Fort Worth (Photo: AirlineGeeks | William Derrickson)

Airline Alliances Through Equity Stakes: Is the Business Model Dead?

In 2014, Etihad Airways introduced its own global alliance with the aim of linking several of its major airline investments to drive an improved global network and enhanced scheduling. Equipped with equity stakes in struggling airlines such as Air Berlin in Germany and Jet Airways in India, Etihad hoped that money would buy greater coordination, which would in turn drive revenue growth. Just over six years later, Air Berlin and Jet Airways have ceased to exist, the alliance has folded and Etihad has embarked on a completely new network strategy under a new leadership team.

Etihad’s challenges may seem unique, but other airlines have equally struggled to make the most of their equity stakes. This begs the question: should airlines continue acquiring equity stakes in other airlines? Or are there other avenues to increase cooperation without the significant financial risk?

While Etihad may initially seem to be an outlier in purchasing airlines with the hope of extending its reach, other airlines have tried similar strategies with varying success. Delta had previously built up an impressive stake in other global airlines including Aeromexico, Air France-KLM, China Eastern, Korean Air, LATAM and Virgin Atlantic. In particular, Delta was able to leverage its equity stake in Air France-KLM and Virgin Atlantic to build on its comprehensive joint venture, operating nearly 300 flights a day across the Atlantic at its peak. The equity stake also came with an opening to name George Mattson as the Delta representative on Air France-KLM’s board of directors, thereby directly influencing the airline’s strategy.

Unfortunately for Delta, the ongoing COVID-19 pandemic has decimated air travel, resulting in bankruptcy proceedings for three of its airlines: Aeromexico, LATAM and Virgin Atlantic. Delta was thereby forced in July to write down nearly $2 billion on the three investments alone, with the biggest mark down occurring with Santiago-based LATAM.

This is by no means judgment on the airline’s network strategy in non-pandemic times, but rather a vivid description of the risk an airline accrues by investing in other airlines. The airline industry is well known for having a volatile past on a macro level and adding more airlines to the mix only heightens the risk involved.

In addition to the financial risk of investing in other airlines, there is also the risk that an equity stake does not buy as much power as one would expect. Virgin Australia has met many suitors over the last decade, with bits and pieces of Virgin Australia being purchased by Air New Zealand, Etihad, HNA Aviation and Singapore Airlines. HNA had ambitious plans to increase access to the Chinese tourism market in Australia, while Singapore Airlines pushed to increase its business in Australia and channel more long-haul traffic to its home at Changi International Airport.

With so many airlines in the mix and each having their own opinion in how to structure the airline, it morphed into an airline of opposing strategies. Domestically, the airline slowly began to show profitability as a duopoly formed with its long-time nemesis, Qantas. Virgin’s international picture tells a different story, as Reuters reported in 2018 that Air New Zealand pushed for the airline to abandon its money-losing international wide body fleet and to focus its efforts on profitable, short-haul flights instead.  When it was evident that Air New Zealand wouldn’t be able to persuade the other shareholders that this was the right strategy, it opted to sell its stake in 2016 to Chinese conglomerate Nanshan Group.

Without an equity stake, airlines still can collaborate, grow revenue and influence one another’s decisionmaking on international networks. One prime example of this is the American Airlines, British Airways and Iberia Airlines joint venture launched in 2010. The joint venture has since expanded to include Aer Lingus and Finnair as well and allows the airlines to share revenue on flights, regardless of which airline is operating the flight. This provides significant flexibility, as British Airways can operate routes that are likely to include more British customers, such as flights to tourist destinations like Orlando or Las Vegas. The airlines are also allowed to work together to coordinate pricing, scheduling and marketing, giving the airline free-reign to work as allies rather than competing airlines across the pond.

There is always a chance that, if desired, either airline could walk away from the agreement given that no equity stake exists that would influence corporate strategy decisions. However, given how profitable the venture has been, it seems highly unlikely that any partner would step back.

Each airline must make its own decision on how it can best serve its shareholders, customers and employees. In the past, many airlines have considered equity stakes in other airlines a solution to gaining greater access in new markets, influencing corporate strategy and driving revenue growth. However, equity stakes don’t guarantee influence, nor do they reduce risk in the event of an economic recession. History has not been kind to these investments, but only time will tell whether airlines opt to follow a similar playbook post-pandemic. 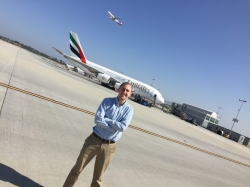 Joe Pesek
Joe joined AirlineGeeks in January of 2014, and has since taken on a number of roles within the organization including Writer, Editor, Editor-in-Chief, and Director of Finance. Whether it involves joining an inaugural 737 MAX flight to Houston, or a retirement MD-80 flight to Roswell, Joe is dedicated to furthering his passion for the airline industry while serving as a mentor to new members of the AirlineGeeks team.