JetBlue’s A220 at the hangar in New York (Photo: AirlineGeeks | William Derrickson)

Last week, JetBlue Airways received its first Airbus A220 aircraft, an impressive feat during the coronavirus pandemic. The new plane is one of 70 on order with Airbus and to replace the airline’s Embraer E190 fleet. According to Philip Stewart, JetBlue’s Manager of Corporate Communications, the airline will receive six more A220s in 2021 and eight in 2022.

On Monday, AirlineGeeks got the opportunity to recieve a first look at the A220’s interior and sit down with the company’s director of project development, Mariya Stoyanova, to discuss the airplane’s superior inflight experience and why this jet was chosen over competing aircraft, like the Embraer 195-E2 or the Airbus A319ceo.

JetBlue is known for its outstanding inflight experience, including free WiFi and movies, on-demand tv and power outlets. But the A220 takes this one step further. The new jet features 18.6-inch wide seats, large windows and lavatories, upgraded passenger comfort, more space throughout the cabin and incredible attention to detail. Each change and upgrade was based on customer feedback received in post-flight surveys, making the inflight experience perfectly tailored to JetBlue customer wants and expectations says the company. 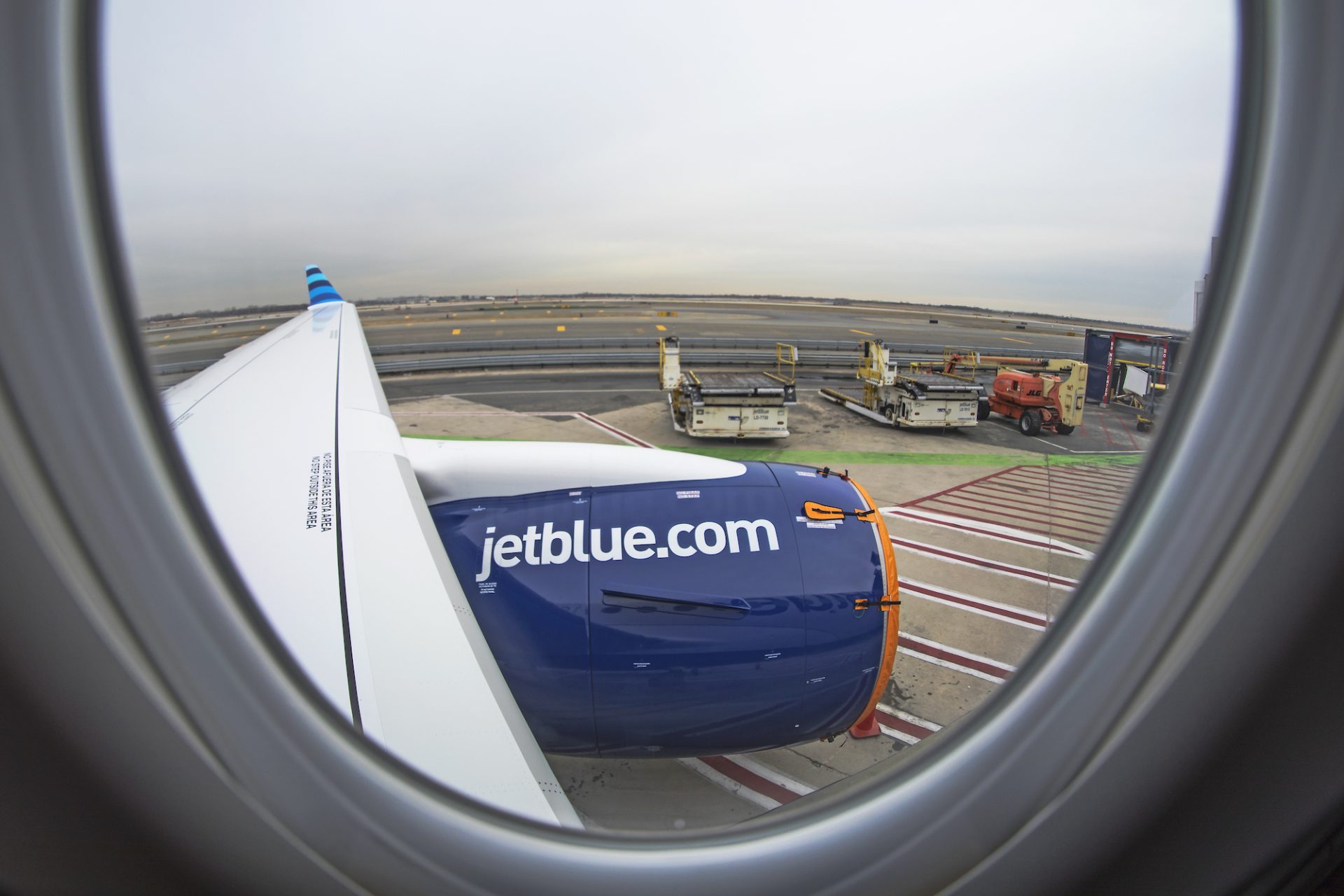 Overlooking the engine on JetBlue’s A220 (Photo: AirlineGeeks | William Derrickson)

JetBlue’s 140 A220 seats have been upgraded with memory foam and extra-soft vegan leather for the seat covers. Stoyanova said this would improve passenger comfort and support and explained customers would feel like they are truly sitting in the seat rather than just on it.

Furthermore, the headrests, situated on the upper back of each seat, have been improved to better stay in place after folding in, and more pockets have been added to the seatback. The pockets are made of mesh and include space for laptops, water bottles, trash and other miscellaneous items. The goal of the mesh is to help passengers easily see their things, which makes it less likely for them to leave anything behind. 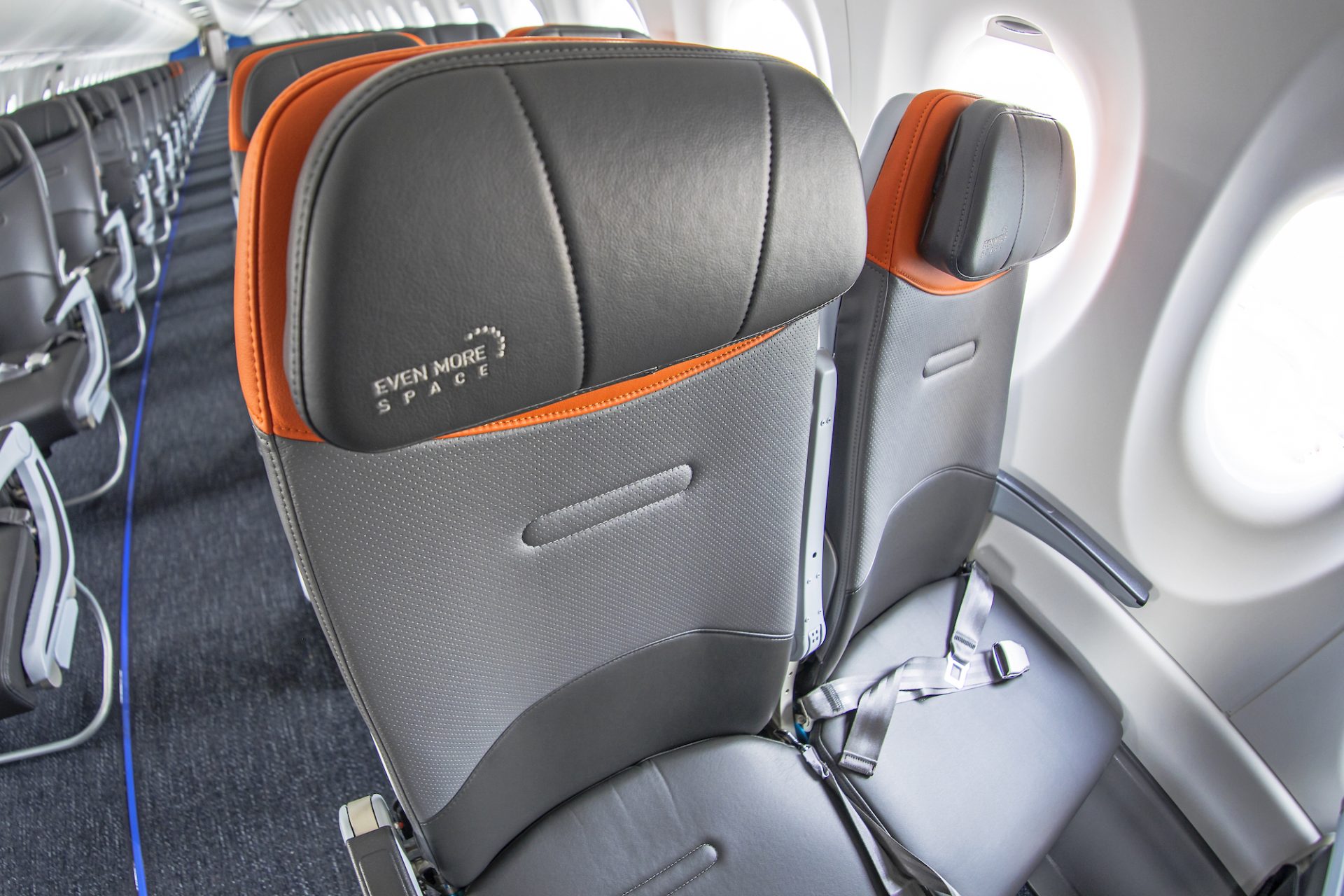 JetBlue’s A220 aircraft features a 3-2 configuration with five rows of Even More Space seats and 23 regular economy rows. The former boasts a 35-inch pitch, and the latter features a 32-inch pitch. The seat width has also been upgraded to an impressive 18.6 inches, giving each passenger, even those in the middle seat, more than enough personal space. 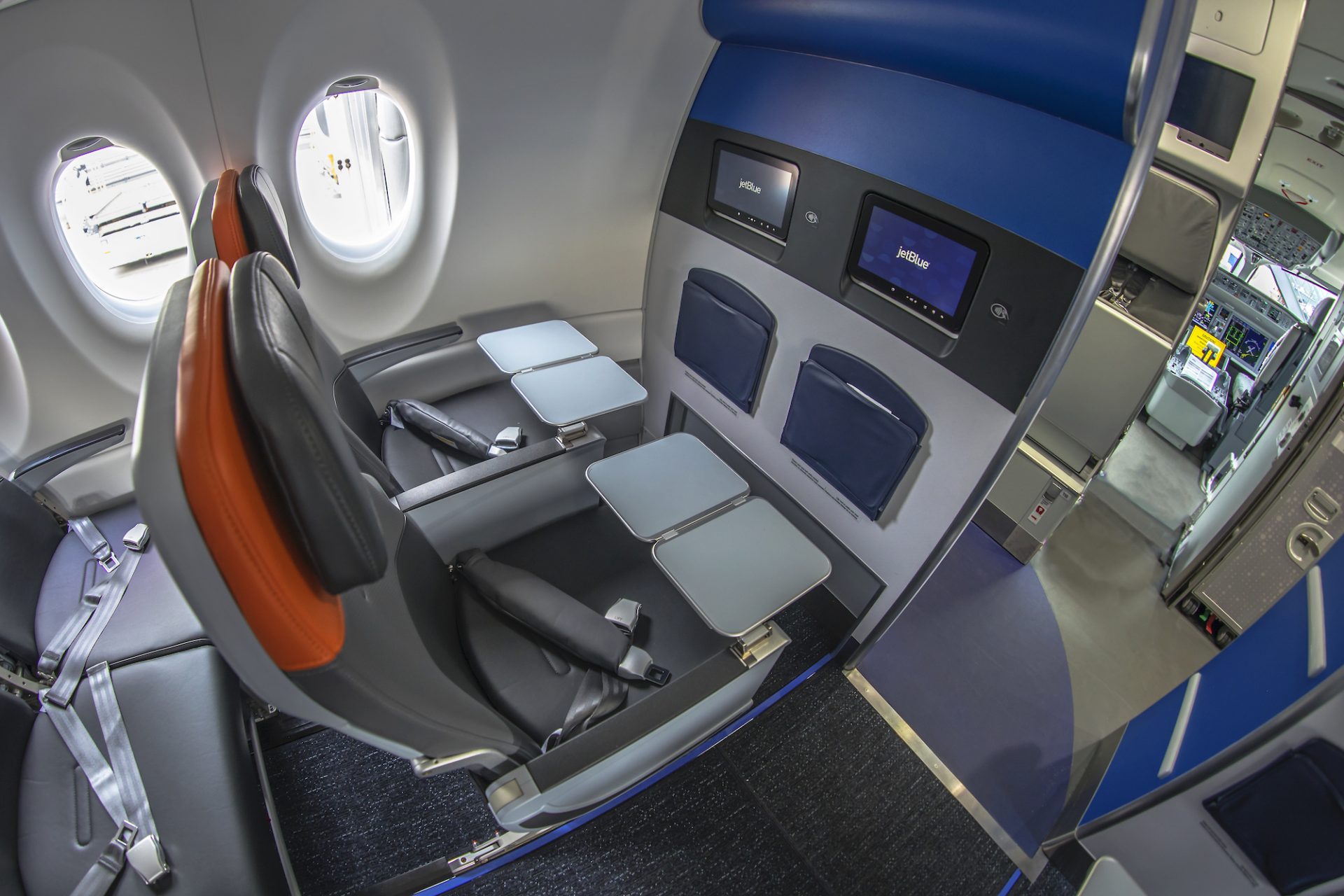 One surprising detail regarding JetBlue’s seats is the limited recline. Seat recline is an ongoing debate in the industry, with some people saying passengers have the right to recline and others saying it is an invasion of space. So, JetBlue has collected passenger feedback and made adjustments to create a compromise that both sides of the argument can agree with. According to Stoyanova, the A220 seats have a two-inch recline, which is less than the airline’s A320 model.

Stoyanova explained that because the aircraft’s seats are well-designed, two inches of recline is more than enough to still feel comfortable. She also explained that the recline will not intrude on the person behind’s space, meaning their laptop will not be crushed, and they can still easily see the personal screen.

While JetBlue uses the overhead bins provided by Airbus, the company has tailored some features to improve passenger accessibility. For example, larger placards have been installed in each compartment to indicate how passengers should properly arrange their luggage. The bold signage is more noticeable to customers and, when followed, allows for more storage in the cabin. Furthermore, the compartment handles have been placed lower so passengers of all heights can more readily reach them. 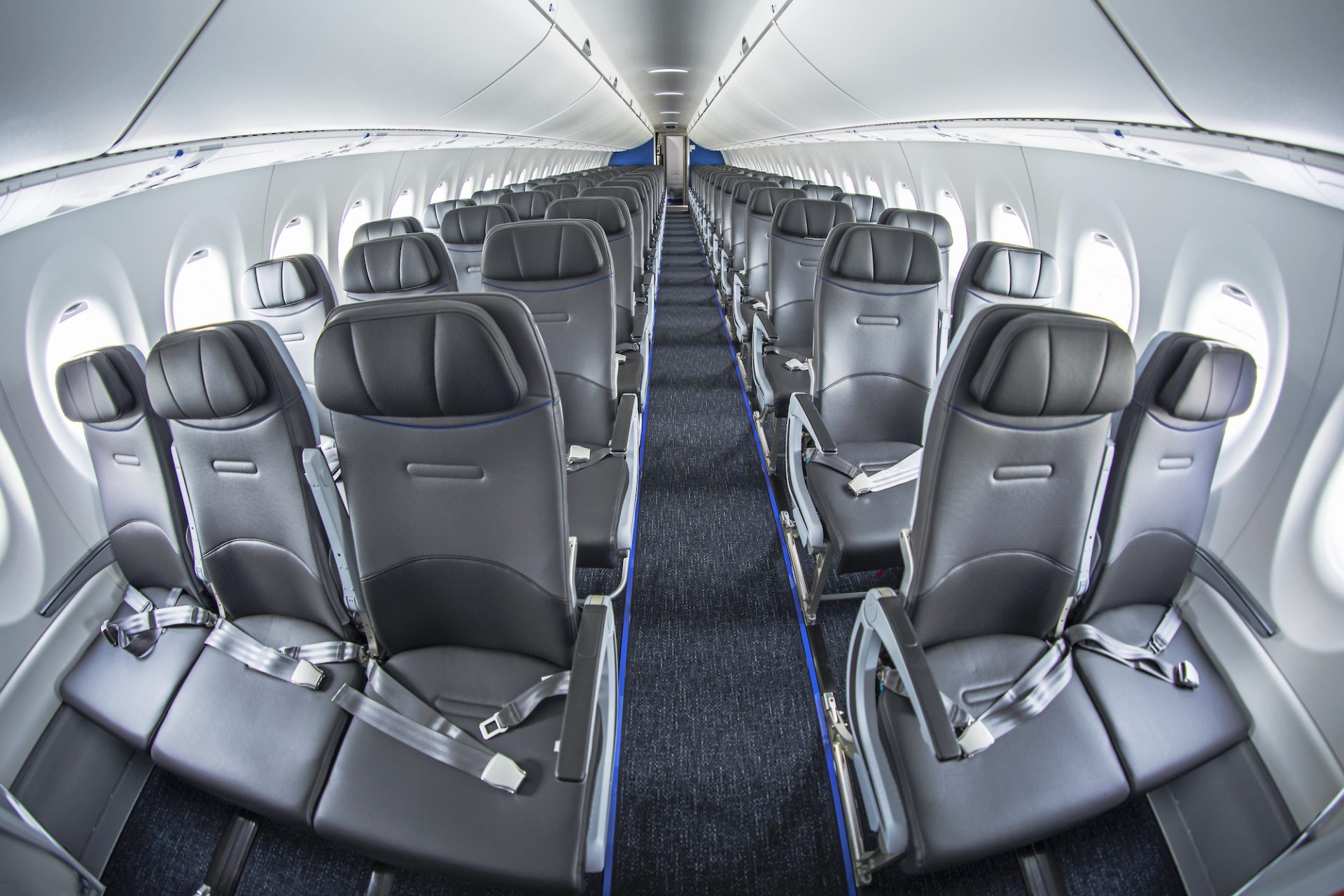 Another new feature is the separation of the first row of bins from the inflight emergency equipment storage. On the A320, the compartments are side by side, and passengers sometimes confuse the equipment bin for storage space. However, on the A220, the emergency equipment is stored in a blue compartment that extends below the passenger bins. Its location and color make it more discernible from baggage storage and ensures passengers do not mix their belongings with inflight items.

Stoyanova’s team did not skip a beat when it came to the aircraft’s beautiful interior. One of the most incredible details is the morse code that can be seen along the aircraft’s walls. The design is subtle, but once pointed out, passengers will be able to discern the series of lines and dots that spell out “JetBlue.”

Another impressive design is inside the lavatories. Not only are the lavs spacious with luxurious sinks and toilets, but the wall design replicates the New York City subway tiles. The idea was to take a staple part of the airline’s hometown of NYC and put it into the aircraft. Passengers will also appreciate that the lavatory floors look like concrete – another ode to the metro. 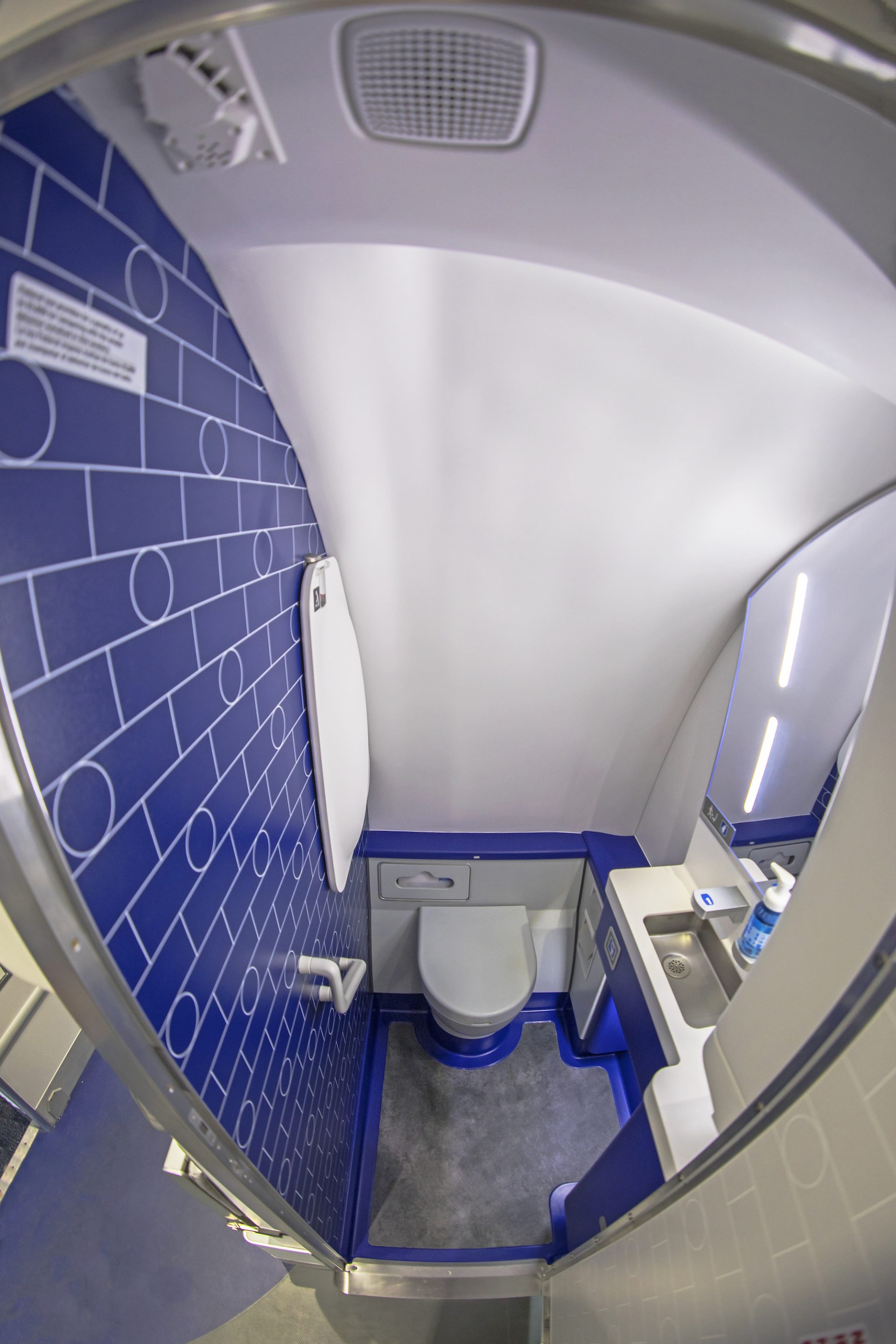 JetBlue has also incorporated a second creative floor design at the front of the aircraft. The design includes a blue path that begins at the main entry door and curves into the cabin aisle. According to Stoyanova, this detail was included to guide passengers into the jet’s aisle and away from the galley. This detail keeps the flight crew and passenger areas better separated during boarding and deplaning.

The aircraft’s interior design and inflight passenger experience are two of the most important things for Stoyanova’s team. She explained, “We optimized the A220 for our crew and for our customers and tried to infuse JetBlue’s brand and design in fun ways, rather than just a logo slap. We have also brought our full suite of products to the aircraft, including our commitment to screens and comfortable seats, so customers will get the full JetBlue experience on routes that other airlines don’t offer.”

While the tour of the A220 focused mostly on the inflight upgrades and passenger experience, Stoyanova also discussed why this aircraft type was chosen over competitors, like the A319ceo or the Embraer 190-E2. She explained that the efficiency and range of the A220 played a significant part in the decision. Furthermore, choosing an Airbus-built aircraft was more favorable from a consistency perspective, as JetBlue already operates a large fleet of A320 family aircraft.

According to Stoyanova, creating the interior design of the A220 did not require a significant learning curve, and there were only a few things the team had to do from scratch, such as installing the ViaSat inflight connectivity system, which had never been done before on an A220.