The raw product for the production of the Butantan COVID-19 vaccine is unloaded in Viracopos Airport. (Photo: São Paulo State Government)

After months of stoppage, this week a Brazilian airline operated the first flight in months connecting the South American country and China in the fight against COVID-19. This time, the cargo it brought back contained material for the production of 8.6 million vaccine doses, the country’s next step in its fight against COVID-19.

The flight — connecting Beijing to Campinas, Brazil via Amsterdam — was operated by LATAM Airlines Brasil and LATAM Cargo and was chartered by the São Paulo state government, partially on behalf of the Butantan Institute, the public biological research institution that is leading the vaccine run in the country.

Flight LA9555 was operated by PT-MUI, a passenger Boeing 777-300ER, and carried 5,400 liters of the active pharmaceutical ingredient needed for the production of the vaccine. Produced by the Chinese company Sinovac, a government partner for vaccine production, the load was then taken to the Butantan Institute, where 8.6 million doses of the vaccine will be produced, crafted and distributed.

São Paulo governor João Doria celebrated the achievement, receiving the aircraft at the airport in Campinas.

This was the first operation to China made by a Brazilian airline in more than half a year. The last flight was operated in July, also by LATAM Brasil and chartered by Brazil’s Infrastructure Ministry. It was the last in a round of 39 roundtrips to the Asian country bringing masks and other personal protective equipment in an effort to fight COVID-19. For those flights, LATAM reshuffled the seats in five of its 10 777s to be able to carry more cargo in the passenger cabin.

Other public entities, including Rio de Janeiro’s city government, also hired LATAM to bring supplies from China during the pandemic. Azul, the other major Brazilian passenger airline to operate widebody jets, also operated a handful of flights to the country with its A330-900neos.

As the work to distribute vaccines in Brazil has begun, efforts have been concentrated in bringing over finished doses. But more recently, bringing over the supplies for local production has taken center stage. Besides Butantan Institute and Sinovac, the federal government’s Oswaldo Cruz Foundation — in partnership with the University of Oxford and AstraZeneca — is also producing vaccines on local soil. To this point, however, most supplies had been brought by foreign airlines.

In January, as São Paulo’s government was about to start the distribution of its vaccine, the federal government rushed to bring two million finished doses of the Oxford vaccine from India, hiring an Azul A330-900neo for the mission. The aircraft was stickered celebrating the vaccination effort. 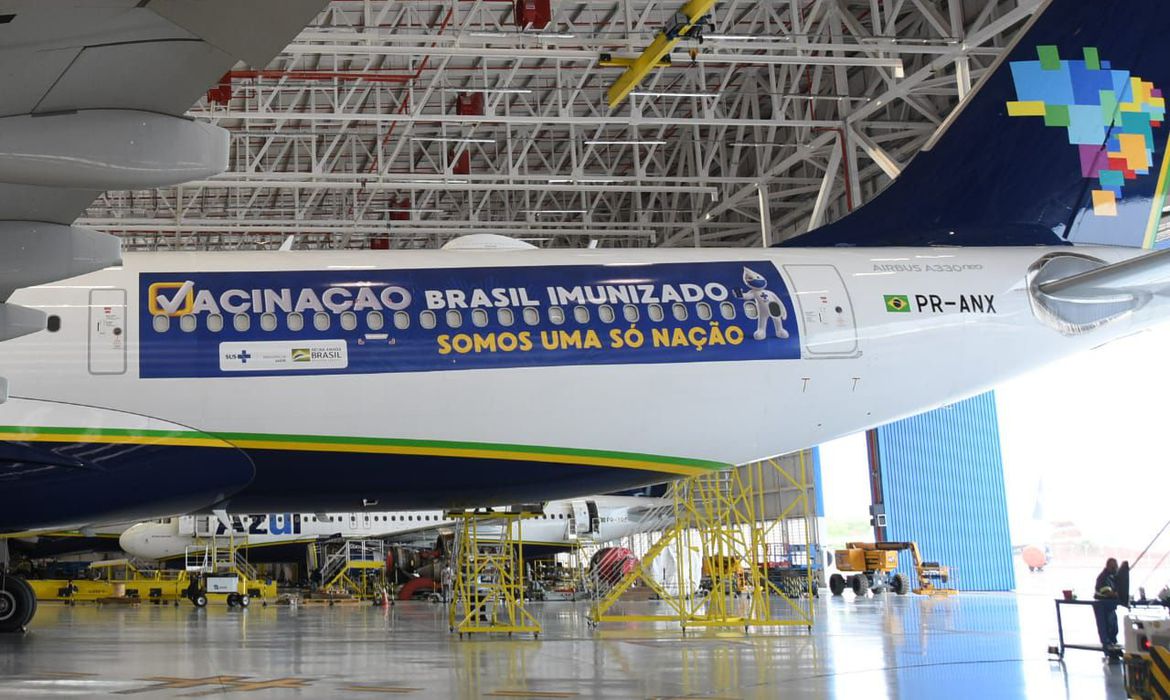 However, after India refused to clear the export of such a valuable asset, the flight was canceled and the sticker removed. Days later, an Emirates 777-300ER brought the shots. The next batch of the active pharmaceutical ingredient for Butantan is expected to arrive in Brazil on Feb. 10, according to São Paulo’s state government.