Onboard a JetBlue Airbus A321. (Photo: AirlineGeeks | William Derrickson)

As the COVID-19 pandemic began to rage throughout the world in early 2020, airlines searched for ways to make the travel experience safer and minimize contact between their employees and passengers who were still flying. For many carriers, this meant the addition of mask requirements and stricter cleaning protocols to ensure a more sanitary experience in addition to drastic cutbacks on inflight food and beverage services to keep flight attendants in the galleys as much as possible.

Almost a year later, those cutbacks — which conveniently also served as a way for the airlines to limit inflight costs as their top lines were ravaged by the COVID-19 pandemic  — and other changes are largely still in place, though that is set to change next month. A number of large U.S. carriers have announced their intention to further bring back inflight food and beverage aboard their aircraft in the weeks ahead, and others have already done so more quietly.

Southwest Airlines, however, has already restarted a pared-down inflight service on its aircraft, offering passengers a choice between water, Coke, Diet Coke and 7Up. The change likely came the same day as it resumed use of its normal boarding process, which was discontinued last year to allow for boarding in smaller groups, on March 15.

The airline, in a statement to TPG, said it is encouraging customers to limit speaking while ordering, instead looking at and selecting drinks on Southwest’s website and showing flight attendants which option they prefer. The airline also said flight attendants may also hold up a menu with numbered options, allowing travelers to indicate their choice that way.

“Our customers are expressing a preference for additional beverage options, so this is one small way that we can meet customer requests while still limiting selections to support the wellbeing and comfort of our customers and employees,” a Southwest Airlines spokesperson said in a statement to AirlineGeeks, adding that “these additional options are offered on fights over 250 miles.”

In just under three weeks, Delta will start its revamped inflight service, which will feature traditional beverage offerings in addition to canned drinks being served in smaller 7.5-ounce servings to keep from using the same can for multiple customers. The airline will also restart alcohol sales onboard its short-haul domestic flights, becoming one of the first carriers in the U.S. to bring back those offerings.

American Airlines continues to hand out snack bags for economy class passengers, as other major U.S. airlines have done throughout the pandemic, in addition to offering pre-packaged choices for first class passengers on longer flights. The airline, however, has let slip no indication that policy will change going forward. 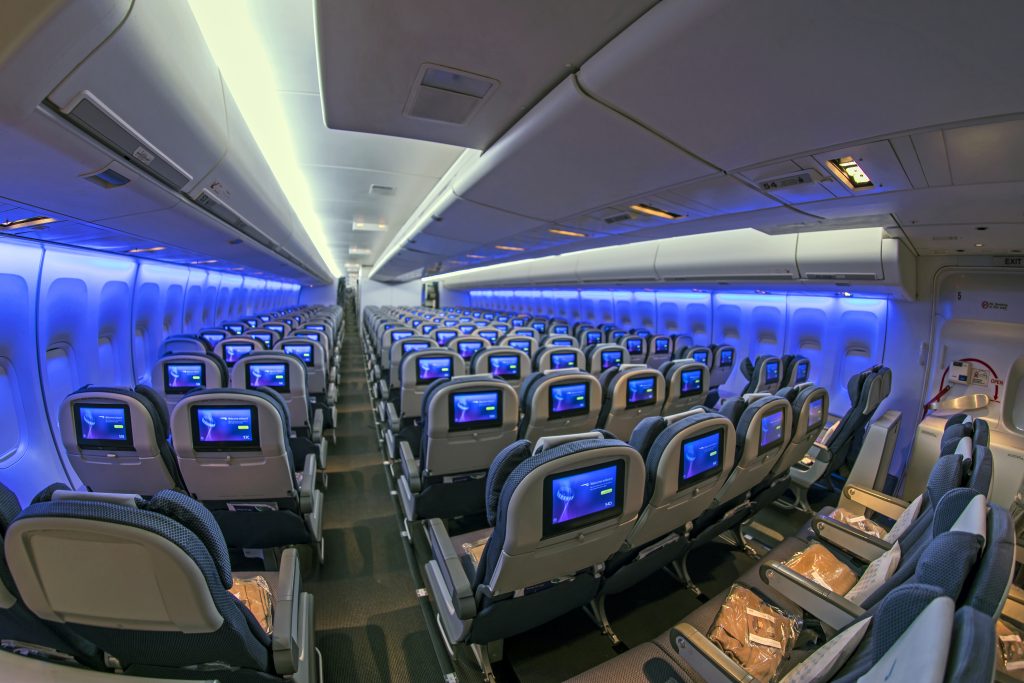 Onboard a British Airways 747-400 in the economy cabin. (Photo: AirlineGeeks | William Derrickson)

While the U.S.’s largest airlines are just beginning to transition back to making more options available for passengers aboard their flights, a number of other airlines across the U.S. saw much more limited changes, if any at all, to their complimentary and buy-on-board options.

JetBlue offered only a subset of its pre-COVID-19 menu to flyers in its economy class cabin, but passengers still had the opportunity to buy some foods onboard and had access to a wider array of drinks. And in its Mint business class product, the airline worked to offer full meals.

Alaska Airlines did the same for longer flights though restricted its options aboard shorter flights. Low-cost carrier Spirit Airlines left its buy-on-board offerings intact, even as competitor Frontier Airlines shortened its list of options.

As airlines work to dig themselves out of the financial hole which many found themselves in throughout 2020, finding a balance between cost-cutting and working to gain as much additional revenue as possible will be key. Airlines have worked to toe that line as they’ve relaunched flights and added capacity throughout the end of 2020 and start of 2021, often falling behind demand on key weekends suffering from pilot or equipment shortages. Inflight service will serve as just another front for airlines to meet that goal throughout 2021.

For airlines that haven’t been able to make available their entire menus to travelers in the past year, the next few months will likely feature a delicate balancing act as each carrier works to bring back those options while also bolstering the menus they have available for purchase. Striking a balance between the two will enable them to capture as much incremental revenue as possible from passengers who are already beginning to pay much higher fares than just a few months ago to get back in the skies without losing too much to complimentary food and beverage options.