Washington D.C. locals and American Airlines frequent flyers have something to celebrate today – the opening of Reagan National Airport’s brand new concourse! The airport is getting rid of the dreaded Gate 35X, a cramped space that was used to shuttle passengers by bus to their aircraft, and opening a sleek new terminal that does not require any traveler to board a bus.

Robert Isom, President of American Airlines, expressed excitement over the new concourse, saying, “The dreaded Gate 35X is no more! American’s new regional concourse at Reagan National Airport is fantastic news for our customers. When fully complete, the investments made in partnership with MWAA will finally enable American to deliver a convenient, accessible, world-class product befitting the gateway to our nation’s capital.”

The new 14-gate concourse has a soft opening on April 20, which opens Gates 46 through 59 for use by American Airlines’ regional carriers. It has been under construction since 2017 and will be the airport’s first major update in over 20 years. However, the terminal is not fully completed yet. There are still a handful of shops, fast food stands and restaurants to be built, which is scheduled to be done by this summer.

The Metropolitan Washington Airport Authority (MWAA) said, “After the concourse opens, work will continue behind temporary walls and after hours to advance the rest of the building to the finish line.” The authority also explained that the construction will cause “detours for passengers coming from Gates 35 to 45 going past the north security checkpoint.”

The project has cost $374 million, but it is a much-needed upgrade. Reagan National was initially designed to handle up to 15 million passengers per year. However, passenger traffic grew to over 23 million in 2019 and the last major expansion to the airport was on Terminal B/C in 1997.

The project did face challenges during the outbreak of the COVID-19 pandemic. President and CEO of MWAA John E. Potter said, “The opening of the new concourse is the culmination of years of work by thousands of employees who overcame numerous challenges and the seismic changes of a global pandemic to deliver a world-class passenger experience at Washington, D.C.’s airports.”

He further commented, “The airport’s $1 billion investment to transform the traveler experience inside the terminals at the gates and along the roadways will bring a new era of travel to American Airlines’ customers, who can now board regional jet aircraft from jet bridges instead of through Gate 35X.”

What to Expect in the New Concourse

Construction and detours aside, the soft opening is a breath of fresh air for travelers. Before today, passengers heading to their American trip were forced to ride on a cramped shuttle bus from Gate 35X to their aircraft. It was a less than favorable experience that would put passengers through the rain and cold to board their flight. Not to mention, the buses were full of people standing shoulder-to-shoulder, which, even before the pandemic, sounds too close for comfort.

For a more in-depth look at the new 225,000 square-foot terminal, check out MWAA’s video tour here.

The authority captioned the video, “Record passenger growth and consolidation in the airline industry led to the addition of outdoor regional aircraft parking positions at Reagan National accessed via buses departing from Gate 35X. The Airports Authority and American Airlines worked together to respond to customer feedback and improve the experience for regional aircraft passengers by designing and constructing a new 14-gate concourse.”

It continued, “The new concourse will have direct, enclosed access to planes via jet bridges, spacious hold rooms, new concessions and an American Airlines Admirals Club lounge. It will end the need for busing to and from the terminal.” According to American, The Admiral’s Club will be a 14,000 square-foot lounge and will open in 2022. 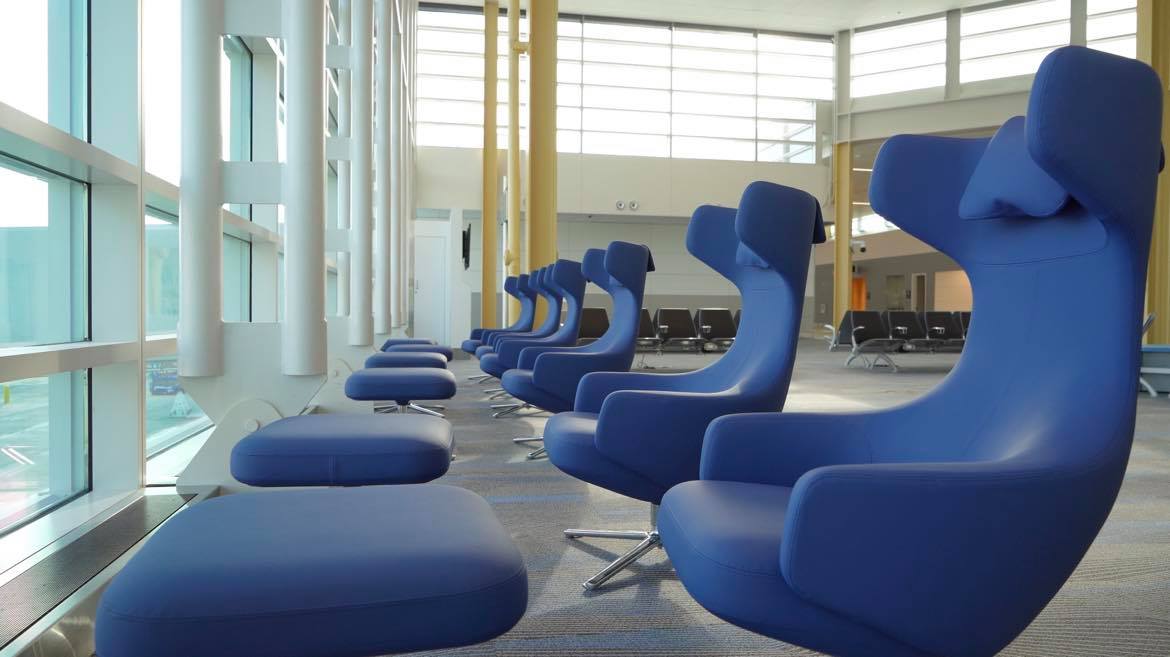 Glen Zacek, Piedmont Airlines’ Director of Customer Service, has worked at Gate 35X for over 20 years. He explained that the gate got a lot of hate from customers but the new terminal is “a beautiful experience” and a “reward for customers and workers.”

As for Gate 35X? It will be converted to a single gate with a jet bridge and be known simply as Gate 35.