As the vaccination effort rolls out and local airlines start to forecast a steady recovery of the market by the second half of the year, as of last Friday Brazil officially welcomed its newest airline. Itapemirim Transportes Aéreos announced it received the COA – Certificado de Operador Aéreo, or Air Operator Certificate, from the country’s National Civil Aviation Agency (ANAC).

The feat was announced by the airline startup on its Instagram feed. In practice, this gives the airline the green light for the start of its revenue operations, and it followed a campaign of test flights. The company’s first Airbus A320, PR-SPJ, made a series of flights with crew only between key airports of the country, which was evaluated by the agency to assess the airline’s aptitude to safely operate.

According to Itapemirim – nicknamed only “Ita,” as the tail of its aircraft says – in a press release, “the approval with ANAC proves that Itapemirim complies strictly with all the norms, standards and regulations of the agency to operate regular flights of passengers in the country, besides being an attestation regarding the safety standards of the airline.” 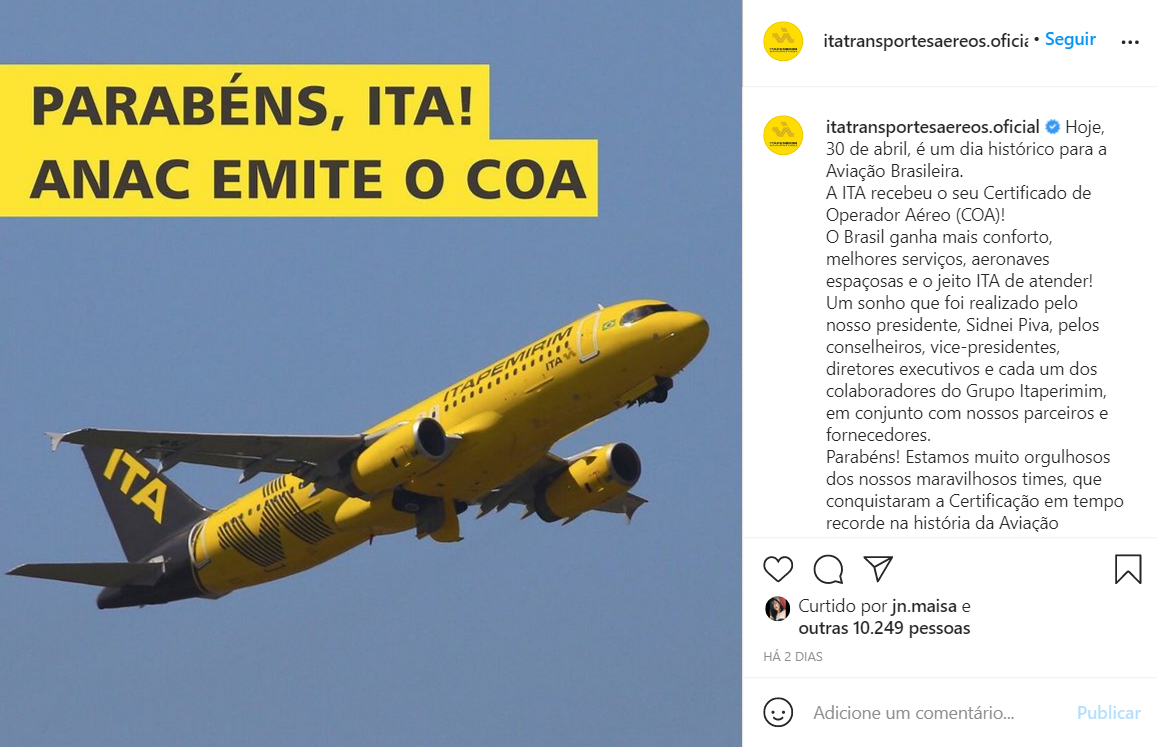 The President of Itapemirim Group, Sidnei Piva – to which the airline’s first aircraft registration, PR-SPJ, is dedicated – celebrated the announcement.

“We are witnessing an important landmark in the history of Brazilian civil aviation. Today, we are proud to announced that we are fulfilling, in the official deadline, all requirements of ANAC. This dream was only possible due to the effort of all directors and employees of Itapemirim Group,” Piva said

With the approval, in practice now the airline can start ticket sales on its website, which will ultimately reveal the airline’s plans, intentions and routes.

Itapemirim has already reserved slots in some airports for flights starting from July 1. At the moment, what it shows is that, in practice, the airline will serve trunk routes in direct competition with most, if not all, of the major airlines in the country: Azul, GOL and LATAM Brasil.

However, the company intends to offer a more competitive product versus its rivals. Although, as far as the first airplane goes, the airline is maintaining the seats from its previous operator – the Spanish low-cost carrier Vueling. Itapemirim says it will configure its aircraft with 162 seats. As a comparison, both Azul and LATAM Brasil have 174 seats in its A320s, although both Azul and LATAM offer the front rows with more space, with LATAM blocking the middle seats in a number of rows as it offers a Premium Economy class.