After months of preparation and a relatively quick certification process, from this week Brazil will officially add a new airline in its domestic market: Itapemirim Transportes Aéreos. The company finally received the green light from the Board of Directors of the country’s National Civil Aviation Agency to explore passenger services, ultimately being able to start ticket sales.

Less than two weeks after receiving its COA, short for Certificate of Air Operator, from the agency, board approval was the final step required before beginning the sales. With that, the airline launched its official web page and loaded its first operations into the system, revealing its initial network, as well as future destinations as new aircraft arrive throughout the length of this year. 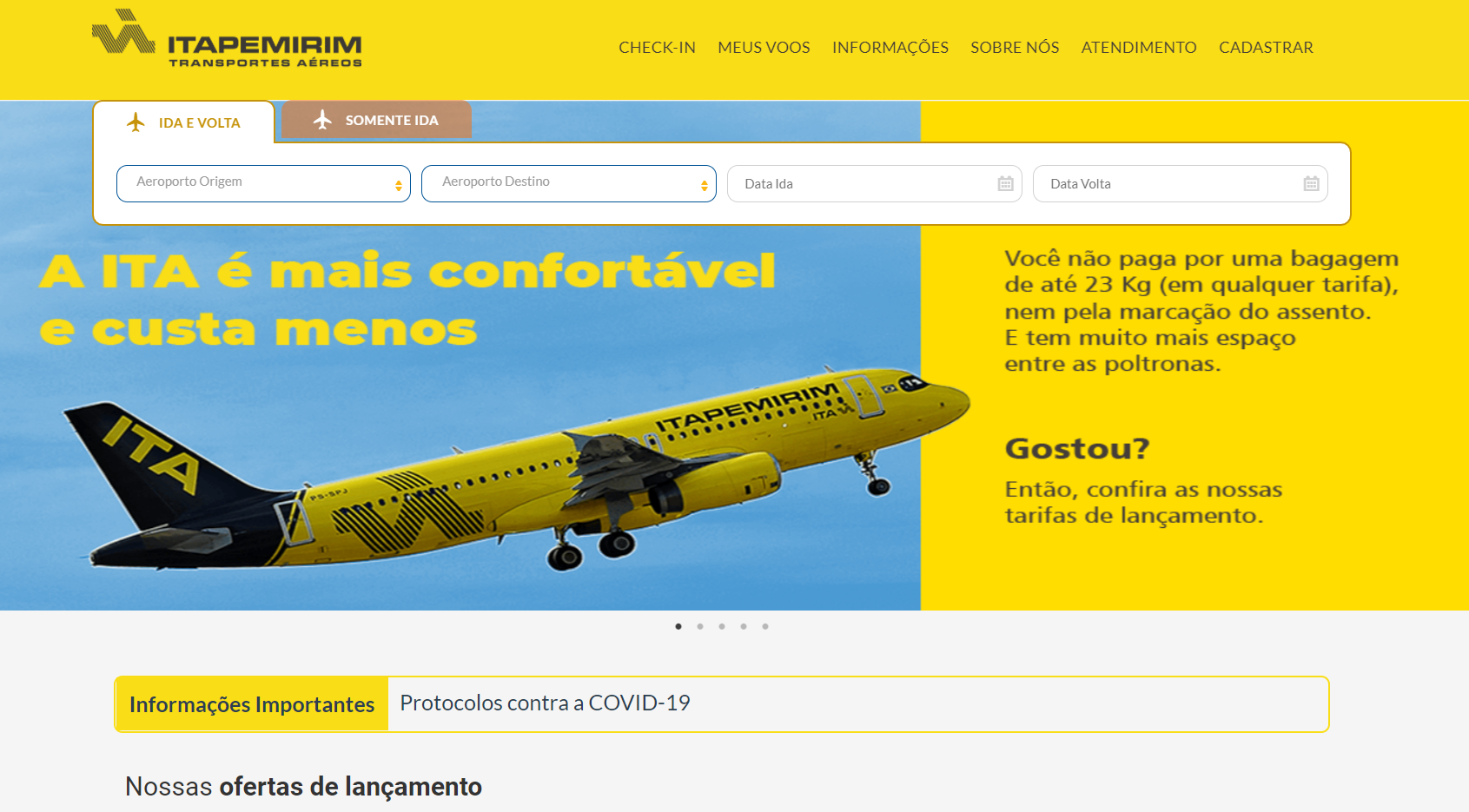 ITA’s homepage was launched after ticket sales were allowed by the national aviation regulator. (Photo: Itapermirim)

Itapemirim’s startup routemap, with cities in blue already with flights for sale and grey cities in the airline’s system, but not yet for sale. (Photo: João Machado | AirlineGeeks, created with Great Circle Mapper)

In the following months, the airline’s network is expected to aggresively expand, as per ITA’s currently loaded flight schedules. In August, Florianópolis, Fortaleza, Maceió, Natal and Recife join the company’s routemap, while in September, Aracaju, Goiânia, Ribeirão Preto, São Luís and Vitória do the same. Finally, in October, it will begin service to Belém, and in November it will add Manaus and Santarém.

While ITA’s first hub will be at Sao Paulo’s Guarulhos Airport, by August the company intends to start building another connection center at Rio de Janeiro’s Galeão Airport. Additionally, 14 other cities in Brazil appear in the airline’s sales system, albeit with no available flights as of today.

A number of these 14 cities are not major cities in Brazil, representing a deviation from the airline’s initial strategy of going all-in on trunk routes already well-served by the major airlines.

Itapemirim wants to counter competition by offering a more premium service. The airline’s A320s, for instance, will hold 162 seats, versus Azul and LATAM Brasil’s 174. The airline will offer a premium economy product, currently only offered by LATAM, and ITA will offer the first checked bag and seat selection free of charge.

That’s a risky combination, one that was tried before by Avianca Brasil, which went bankrupt in 2019. However, this time Brazilian aviation market is in much worse condition Not only has the Covid-19 vaccination campaign slowed down, but health specialists are warning of a possible third wave of the disease, which if it is to happen, would put the industry again at square one demand-wise.

And as the search for every remaining passenger continues, fares are expected to continue as they are or to get even lower, especially with a new entrant dumping capacity on already well-served routes. That is not likely to go well with the higher costs of ITA’s less dense aircraft. How Itapemirim will try to counter such adversities remains to be seen.