United is making bold moves as it prepares for its next era in the post-pandemic world. On Tuesday, CEO Scott Kirby revealed information about the carrier’s ‘United Next’ plan, including adding a record 270 aircraft to its fleet and retrofitting 100% of its mainline narrow-body jets with a new and improved inflight product.

The plan is extremely ambitious, but United is confident in its business strategy, which is expected to improve the customer experience, create thousands of jobs, lower its carbon footprint and contribute billions to the U.S. economy.

United Makes Single Largest Order of Any Carrier in a Decade

In a press release, United announced 270 Boeing and Airbus aircraft will be added to its fleet, making it the single largest aircraft order in its history and the biggest of any carrier in a decade. The order includes 50 737 MAX 8s, 150 737 MAX 10s and 70 Airbus A321neo jets, which combined with the current backlog puts United on track to receive over 500 planes by 2024.

As of 2019, the airline had the second-largest commercial fleet in the world behind American Airlines, but the new aircraft may eventually catapult it ahead. Year by year, the airline expects to introduce 40 aircraft in 2022, 138 in 2023 and up to 350 in 2024 and onward. This means that in 2023 alone, the airline will be receiving an average of one new aircraft every three days.

According to the airline, the massive order is expected to create 25,000 well-paying, unionized jobs. This is particularly good news for the 12,000-strong pilot group, which is expected to grow by 10,000 within the decade.

Captain Todd Insler, United’s ALPA Chair said in the release, “This is exactly what we planned for when we reached our industry-leading pandemic recovery agreement last year and kept United pilots on the property, trained and ready to take advantage of the rapid recovery in passenger demand. With the strength of our network, fleet, and pilot compensation, we are sure United will remain the destination of choice for the most highly qualified airline pilots.”

The initiative will also increase the total number of available seats per domestic departure by nearly 30%, which should drive some $30 billion in customer spending. The positive impact on the U.S. economy is extremely important in the post-pandemic world, especially for the tourism industry.

Kirby described United Next’s expected ripple effect on the country and customers, saying, “Our United Next vision will revolutionize the experience of flying United as we accelerate our business to meet a resurgence in air travel. By adding and upgrading this many aircraft so quickly with our new signature interiors, we’ll combine friendly, helpful service with the best experience in the sky, all across our premier global network. At the same time, this move underscores the critical role United plays in fueling the broader U.S. economy – we expect the addition of these new aircraft will have a significant economic impact on the communities we serve in terms of job creation, traveler spending and commerce.” 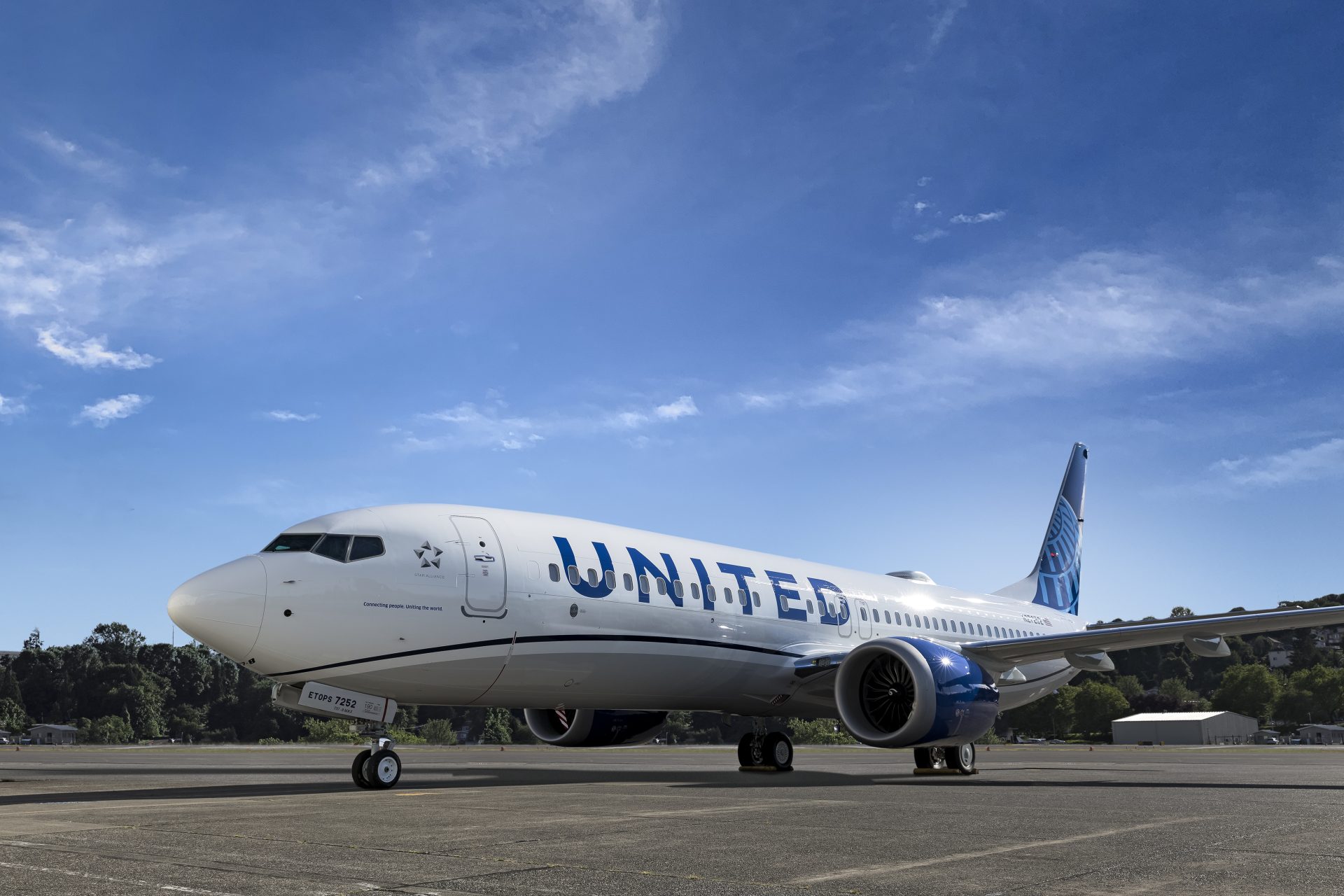 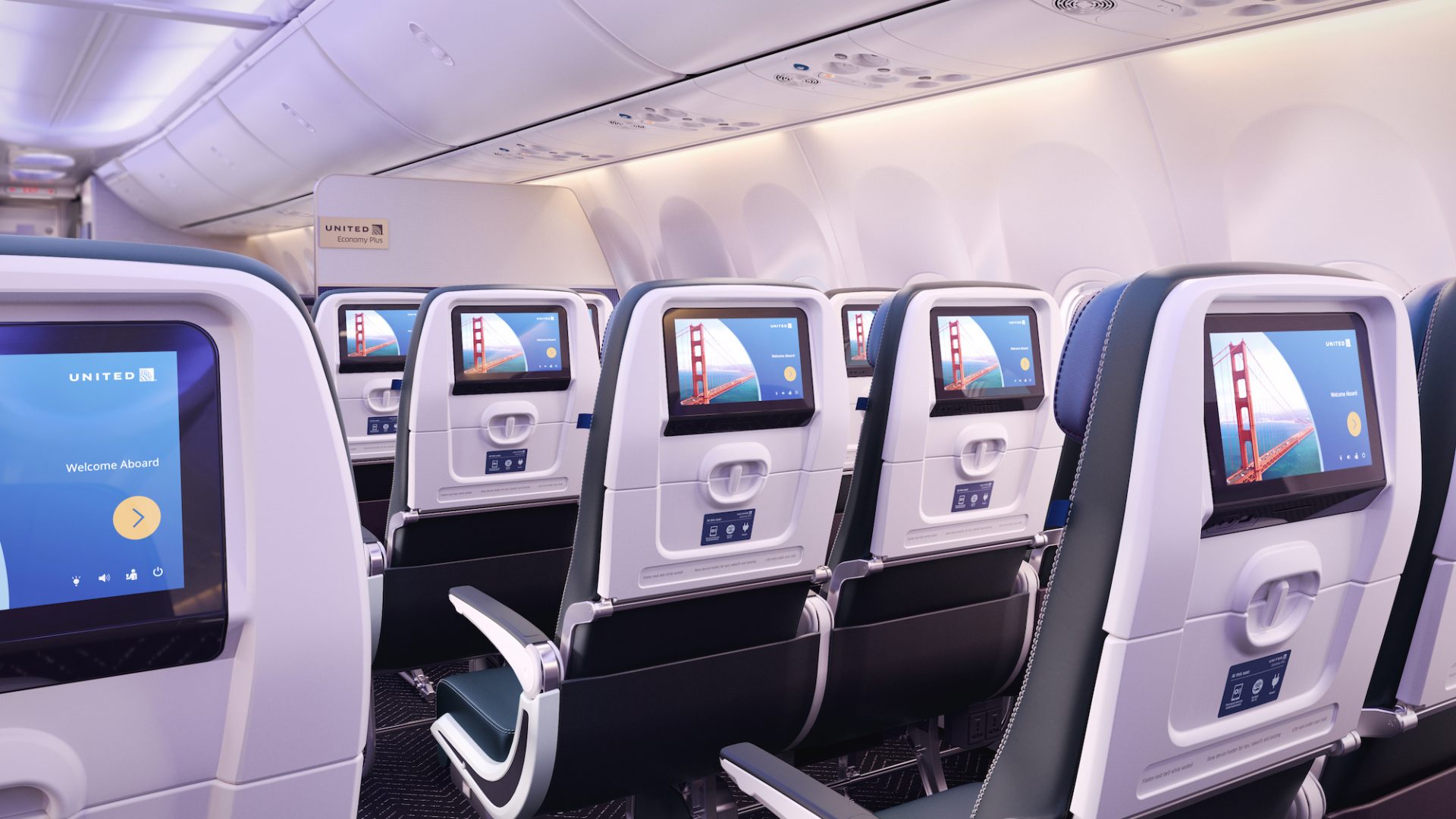 A rendering of inflight entertainment screens on the airline’s new aircraft (Photo: United)

The airline expects the improved configuration will create an average of 53 premium seats per North American departure — more than any competitor — and will give its customers access to modern seats on every flight and more options when selecting a fare class.

All 270 aircraft on order will be fitted with United’s new signature interior. Upgrades include the industry’s so-called ‘fastest inflight Wi-Fi,’ relaxing LED lighting, large overhead bins built to fit every carry-on bag, access to electrical power and USB charge ports and seatback entertainment for every passenger.

The decision to improve the bin space was specifically made to address complaints from customers and employees. The company’s current bins can not always hold every carry-on bag brought onboard, creating boarding delays and stress on passengers, gate agents and flight attendants.

However, United’s plan to add significantly larger overhead bins to every narrow-body jet is expected to help alleviate boarding challenges, including passenger crowding and anxiety, the time it takes to board and the number of gate-checked bags. 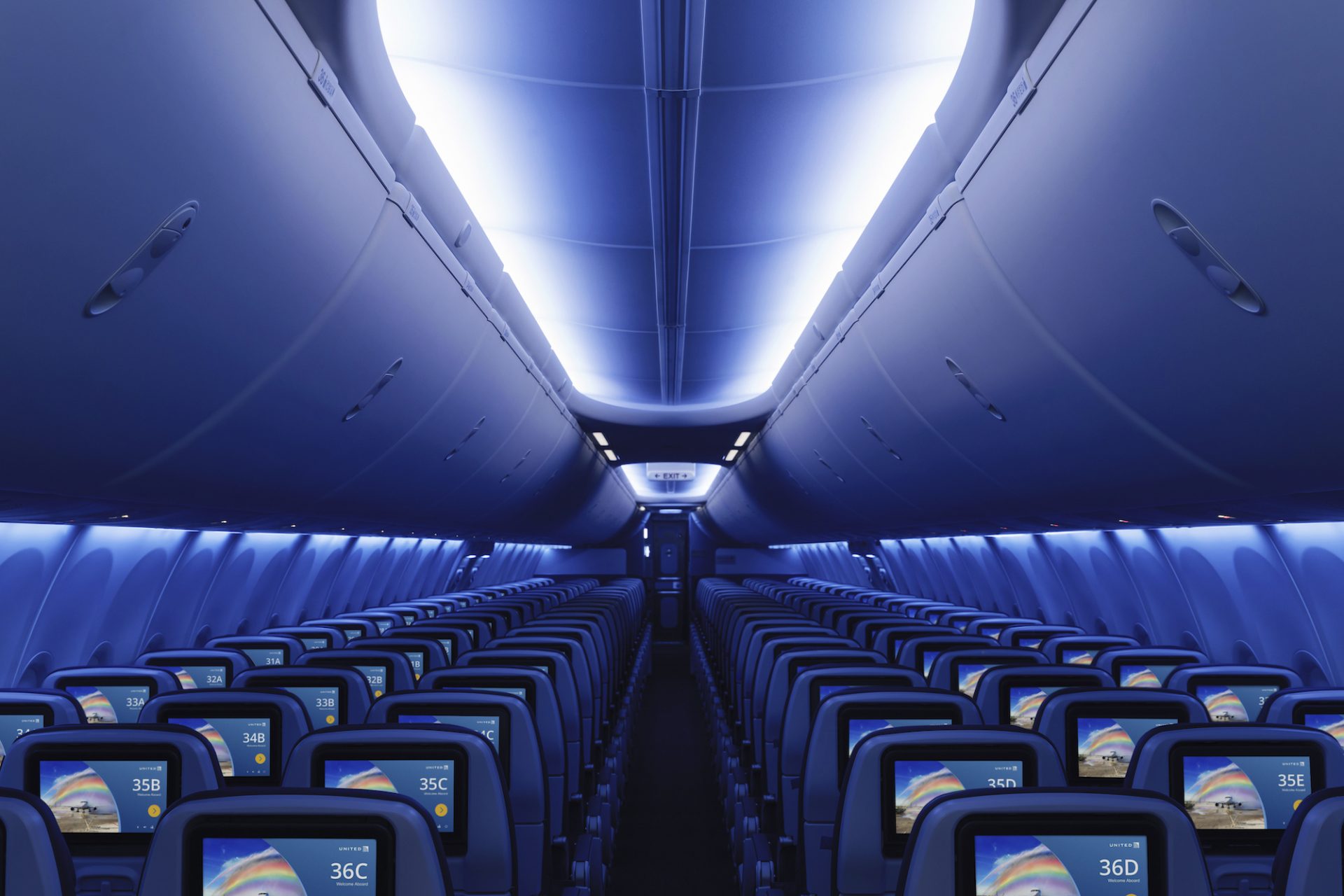 As far as inflight entertainment, the carrier’s 737 MAXs will have a 13-inch screen in first class and a 10-inch screen in each economy class, all of which will be pre-loaded with over 2,800 movies and TV shows, as well as podcasts, music, and games. Documentaries and live concerts can be viewed through United’s partnership with Coda Collection. Meanwhile, Bluetooth technology will connect personal wireless headphones to each screen.

The first 737 MAX 8 with the new interior — delivered on Sunday — is scheduled to fly this summer, while the 737 MAX 10 and Airbus A321neo will begin flying in early 2023. Moreover, United is also planning to retrofit 100% of its current mainline, narrow-body fleet by 2025. The extraordinary ambition will create a unique inflight experience that will make United competitive with Delta’s inflight entertainment product, and shine above Amerian’s.