The new airport already has some tenants including Air China and China Eastern. (Photo: Hufton+Crow)

On Dec 16, Haikou, China’s Meilan Airport will officially open its Terminal 2. The terminal is part of the project for doubling the airport’s capacity. Amid the complicated Covid-19 situation still shadowing the public’s willingness to travel, Chinese airports are grasping this moment as a precious opportunity to expand their facilities without too much disturbance from ongoing operations. 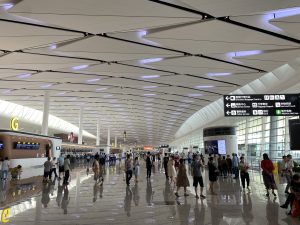 Many new terminals and new runways are under construction in China. Guangzhou, China’s Baiyun Airport, the world’s largest airport in 2020, is constructing multiple concourses and a new terminal aiming to expand its capacity to 120 million passengers; Hangzhou’s Xiaoshan airport is building a new terminal 4 to support the Asia Olympic games; Hong Kong Airport is also on track to have a new runway and a new terminal by 2024. Additionally, new capacities will facilitate the recovery and long-term growth of those regions. 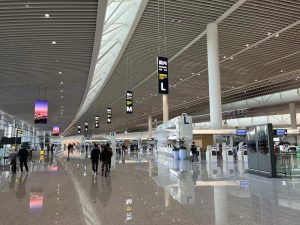 Due to the recent Covid-19 uptick in China, Reuters is warning of negative growth for the aviation market in China. After a weak third quarter, the final quarter of 2021 will likely be very moderate across all regions of China due to the pandemic. For instance, Air China plans to grow domestically as it continues to invest resources within its home country.  As China still adopts a zero-tolerance policy towards Covid-19, travels in-and-out of cities with cases is strongly discouraged with tests and even mandatory quarantine upon arrival.

Airlines are struggling during this trying time. Many major market players have to make the difficult decision to cut their fleets and reduce spending. On the other hand, many airports can withstand the headwinds, and even take on expensive renovation projects. Looking around the world, New York, Los Angeles, Denver, and Sydney are all carrying on with their massive constructions.

Unlike airlines, most Chinese airports are directly funded by local governments for their operation. Rather than being used as a tool to earn a profit, airports are considered a part of public services facilities. Governments will measure the return of their investments on airport expansions for the benefit of their district, instead of merely on profit directly earned by airports. Passenger throughput is an important measure for the healthiness of a region’s economy. According to multiple studies, the growth of passenger throughput of an airport is highly correlated with the region’s GDP growth.

As the vaccination rate of China reaches 80%, and the rest of the world slowly opening up, experts and officials are optimistic that China will loosen the zero-tolerance policy to better interact with the world. Airports are also taking action to prepare for the reopening, including setting up testing areas, and isolating international traffics with domestic traffics. Airports in China will be ready for the new age of travel.