Seattle-Tacoma International Airport (SEA) is the main international airport for most of Western Wash.. It is officially located in Seattle, but is essentially 15 miles south of downtown. For the year
of 2013, SEA was the 15th busiest airport in the United States in terms of passengers flown. For the year, it served about 34.8 million passengers and that number will continue to grow in the next few years, as there is major expansion planned by multiple airlines serving the airport.

Seattle is home to Alaska Airlines and serves as a major international gateway for Delta Air Lines. With Delta being one of the largest airlines in the world and having Alaska as one of the fastest growing airlines in America, it makes for some pretty interesting competition between companies at the airport. The most well known competition is between Delta and Alaska. Delta is growing exponentially at SEA, while Alaska is still having the steady growth any major airline would have at their main hub. Some have dubbed the “rivalry” between the two the “Battle for Seattle”.

All U.S. major carriers serve the airport and a plethora of airlines from around the world. With service ranging from Bellingham, Wash. (25 minute flight) to Dubai, UAE (14+ hour flight) the diversity of airlines and aircraft type is very high. You can sit at your gate waiting for your flight or just plane spot from outside the airport property and it is a possibility that you will see a Boeing 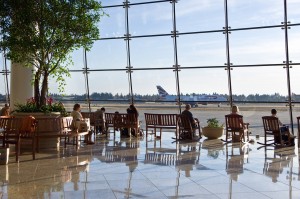 Being the largest carrier by percentage of passengers moved, Alaska has access to the most space in terms of gates, remote stands, maintenance areas. Alaska Airlines uses three main concourses of the airport while all of the other airlines combined use 4 total. With flights operating out of the North Satellite Terminal, the C gates, and the D gates in the main terminal there is no shortage of Alaska Airlines jets and the iconic Eskimo, Chester. From the main viewing area in the C gates area, one can look out the larger glass windows and see a large “farm” of Alaska (operated by Horizon Air) Q400s. With over 20 daily flights to Portland, Ore. alone, there is always some type of action on the main ramp. Alaska Airlines operates one lounge, called the Board Room, at SEA and it is centrally located between the D and C gates. This is open to people flying first class, members of the lounge, and mileage program members the hold some type of status. Alaska serves 52 destinations from Seattle, while regional partners Horizon and SkyWest serve another 38. With a grand total of 90 cities served from Seattle, most places are within reach just with Alaska. Not only does Alaska run a major number of routes from Seattle, it also is home to their main maintenance facility, cargo facility and it is where almost all of their new Boeing 737s are flown on delivery.

If you move south of the “Alaska Terminal” you will reach the A and B gates where almost all other domestic airlines operate out of. At the B gates, you will find Southwest Airlines, Frontier Airlines, Virgin America, and some Delta Air Lines flights. The A gates are where you will find United Airlines, US Airways, Sun Country Airlines, Air Canada and even more Delta operations. Continuing to the South Satellite you will find the main international terminal. At points through the day you can find Hawaiian Airlines, Emirates, Korean Air, All Nippon Airways, Asiana Airlines, British Airways, EVA Air, Hainan Airlines, Icelandair, and Lufthansa. Heading back to the D gates is where you will find the final two airlines that serve Seattle, JetBlue and American 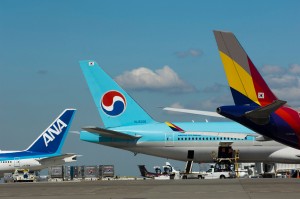 Each set of gates has its own feel and all are different. The A concourse consist of 14 gates and can feel somewhat isolated from the rest of the airport due to its size and location. United Airlines is the largest operator out of the A gates and they even have a United Club for first class passengers and Star Alliance status holders. The B concourse consists of 13 gates with Southwest being the largest operator out of them. The concourse also tends to be considered the low-cost carrier area due to the airlines that it serves. The S gates consist of 13 gates and 4 parking spaces for regional planes. The only Customs & Immigration facilities at SEA are also housed in the S gates. To reach the South Satellite you must take an underground people mover from the main terminal. There are a few lounges located here including the Delta SkyClub and a lounge for international passengers called Club International. With service to many points in Asia and Europe, you are bound to find a wealth of different languages if you happen to be in the satellite. The C gates are home to 12 parking slots for regional jets and 10 gates for mainline or regional planes. SeaTac’s main food court area is located near the C gates but has convenient access to the rest of the concourses as well. Moving along towards the D gates, you will find 10 gates, and Seattle is rounded out at the N gates, which is home to 14 mainline gates, and 5 regional spots.

Most of the concourses are in fairly good shape, except the two Satellite buildings which are in major need of renovation. The customs & immigration checks can get very busy during peak hours and lines can stretch on for three hours and go through makeshift hallways just to stay organized. In July of 2011, when it was announced that there were plans to expand the Federal Inspections Service area, it was greeted with great joy. The approximately $344 million plan is supposed to increase the number of checkpoints by 25 per cent, add a skybridge from the S gates to the A gates to allow more arrival space, and to fix the current problem that involves having to claim your luggage twice. It will also increase the number of wide-body gates from 11 to 20. The current proposed renovation proposal to the N gates involves new walkways, terminal improvements, and new baggage systems. Alaska Airlines has already installed power outlets into all seats near gates in the North Satellite. 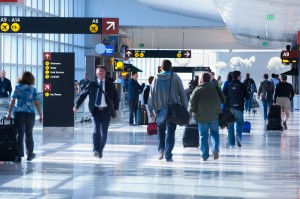 airport were in 1947 by Northwest Airlines and Trans-Canada. In 1951, there were four runways that crossed at 45-degree angles. The first international flight was also in 1951 to Tokyo by Northwest. The first nonstop to Europe was in 1966 by Scandinavian Airlines. Even with flights commencing in 1947, the concourse was not constructed until July of 1957. In the 1970s the area directly surrounding the airport first started complaining about noise, smell, and smoke a.k.a. the stuff you generally think of an airport having. To deal with this, the Port of Seattle has spend over 400 million U.S. dollars to homes, condos, and mobile homes for sound insulation. They have also earmarked 100 million dollars to the Highline Public Schools for sound insulation. Over the years, the main focus at the airport has been to reduce noise and so far, the stats are showing progress overall. In 2007 the University of Illinois and the Port of Seattle teamed up and created a new approach system for SEA, which allows less fuel consumption and less noise pollution. There has only been one major incident involving Seattle-Tacoma International Airport: the D.B. Cooper mystery in 1971 which is still under investigation.

Photos provided by Port of Seattle and Don Wilson