France’s boutique airline La Compagnie has announced that they will be suspending their Luton-New York flight due to the effects of Britain’s decision to leave the European Union.

53.4% of the British population voted for the country to leave the union, which gave grave concerns to many businesses around the world that it could affect the many economies that are fed into the UK.

La Compagnie is due to suspend flights on September 25, 2016 and will instead be adding a second flight from Paris to New York from October 2016. This decision was taken by CEO Frantz Yvelin and other executives to ensure that the airline is “to continue with its development,” according to a press statement made by the airline.

The airline also added in the press release: “The outcome of the EU referendum in June 2016 has played its part in long term uncertainty for the airline industry and hence has required a detailed analysis of this new environment. Consequently La Compagnie will focus on the Paris – New York route for the foreseeable future, with a view to reassessing the London landscape in the future.” Yvelin also commented on the route closure saying: “We would like to express our sincere thanks to each and every one of our passengers who have supported us since the launch of our London – New York operations from April 2015 to present. This has not been an easy decision for us to make but we would like to emphasise that this is the suspension of, not the cancellation of, the London – New York route.”

This route closure does seem to be very confusing for many reasons. For starters, the UK has not left the European Union yet and will not be leaving for another few years, meaning that although there was initial instability within the economy, the economy will remain in the same conditions until the country officially departs from the EU. Secondly, the airline also stated in their press release that the airline received encouraging load factors of 77% since June 2016, which is still adequate for an airline that is the only operator to the U.S from London Luton. Is BREXIT really to blame in this situation for La Compagnie or could it be other factors?

Competition In The New York Market

In the UK alone, there are significant amounts of competition over the New York market. British Airways and Virgin Atlantic operate several flights to New York per day, meaning that they monopolise that market within the British sector. Furthermore, the presence of American, United, and Delta would make it extremely difficult for an airline like La Compagnie to compete. Also, La Compagnie is losing out in terms of customers as they only offer business class services to New York. A vast percentage of passengers travelling to New York would fly in economy class, rather than in business. 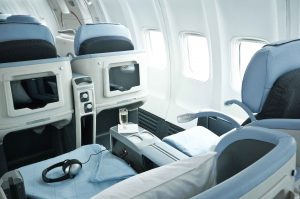 As well as there being intense competition in the UK, there is competition all over Europe for the New York route. KLM, Air France, Lufthansa, LOT, and many other European carriers operate to that specific destination. Many passengers find it much cheaper to transit through European hubs rather than go direct. Again, that is something that La Compagnie would be losing out on as carriers such as British Airways, KLM, Air France, and Lufthansa all offer.

The Airline As a Whole

Compared to the other large carriers within Europe, La Compagnie is a very tiny airline. After all, the airline has two aircraft at the moment. One for the UK operations and one for the French operations. They are relatively the same size as Open Skies, a British Airways subsidiary who also operates between Paris and New York. It could be the fact that the main European and American carriers have the monopoly on that route and that potentially their business class configurations could be more appealing and cheaper to other customers, especially with the use of alliances such as oneworld, Star Alliance, and Skyteam.

La Compagnie also has an Airbus A320neo and Boeing B737MAX aircraft on order. However, this may not fix the airline’s difficult times within the UK market. Due to the oversaturation of the UK-New York market, the airline may be making a wise move to stay within the French market as it isn’t as oversaturated as the UK. Exemplifying this would be looking at Heathrow’s statistics for passenger numbers on the Heathrow-New York route. The airport transfer three million passengers to and from the two destination hotspots. London Luton does not have the capacity, nor does La Compagnie to transport that many passengers between the two destinations each year.

Overall, it can be really hard to say whether BREXIT is the actual cause or not. BREXIT could definitely be having an effect on airlines that are operating in the UK. However, the problem may lie with the size of the airline; it is so small that it cannot compete with the bigger airlines. It is an issue of oversaturation in the market which reduces the ability to thrive in all markets and destinations; that is the ultimate problem for small airlines like La Compagnie.