This announcement builds on Qatar’s current combined 777-300ER and 787 Dreamliner fleet of 84 aircraft, all of which have been delivered over the past nine years. The Doha-based airline currently has 65 aircraft on order from Boeing. With this announcement, that number has risen to 105, which includes 60 777Xs. 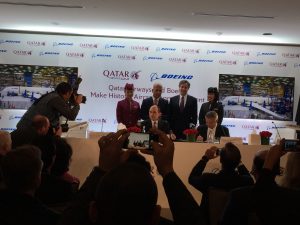 “Qatar Airways, already one of the fastest growing airlines in the history of aviation, today announces a significant and historic aircraft order that will power our future growth for the years and the decades ahead,” said Baker. “Boeing has proven to be a valuable partner, and today’s announcement is testament to our appreciation of the quality of their product and their dedication to providing world class customer service.”

Conner stated, “Our partnership with Qatar Airways has grown and strengthened tremendously over the years and I look forward to the time when its fleet will feature an increasing number of both our single and twin-aisle airplanes.”

“[This is a] very important order for not only the United States but also Boeing employees,” he added. 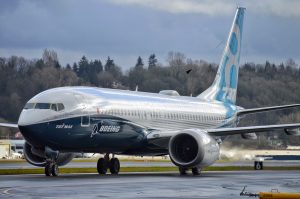 Qatar was the first airline to operate the 787 Dreamliner in the Middle East, and is a launch customer for the 777X, which is expected to roll off of Boeing’s manufacturing line in 2018.

The 737 MAX 8 will be the first single aisle aircraft from Boeing in over 15 years. Baker added, “[The] 737 MAX meets our needs and expectations.” The efficient 737 variant is expected to be delivered to launch customer Southwest Airlines in 2017.

Additionally, the new widebody airplanes will feature Qatar’s new business class cabin, which has not yet been officially unveiled to the public.

LATAM Airlines reported on Monday its preliminary operating results for the month of August 2020, which demonstrate steady progress in…

Emirates to Begin Flights Between UAE and Isreal

LATAM Airlines Group reported on Wednesday that it has shown a gradual recovery of its operations in recent months. In…