Air Caraibes took the delivery of their first Airbus A350XWB on Feb. 28, 2017 making them the first French carrier to operate the aircraft type. In addition to F-HHAV, Air Caraibes will be receiving six A350XWBs, one of which they will be receiving at the end of March and three A350-1000s on order in the coming year.

The delivery of the A350XWB marks a new era for Air Caraibes as the additional 7% capacity per aircraft increase will help the airline transport more of the more than one million passengers per year on the Paris to Guadeloupe route.

For its delivery flight, the aircraft left Toulouse at 2 p.m. in the afternoon and arrived at Paris Orly at 3:15 p.m. where it was given the traditional water cannon salute upon arrival at the gate. 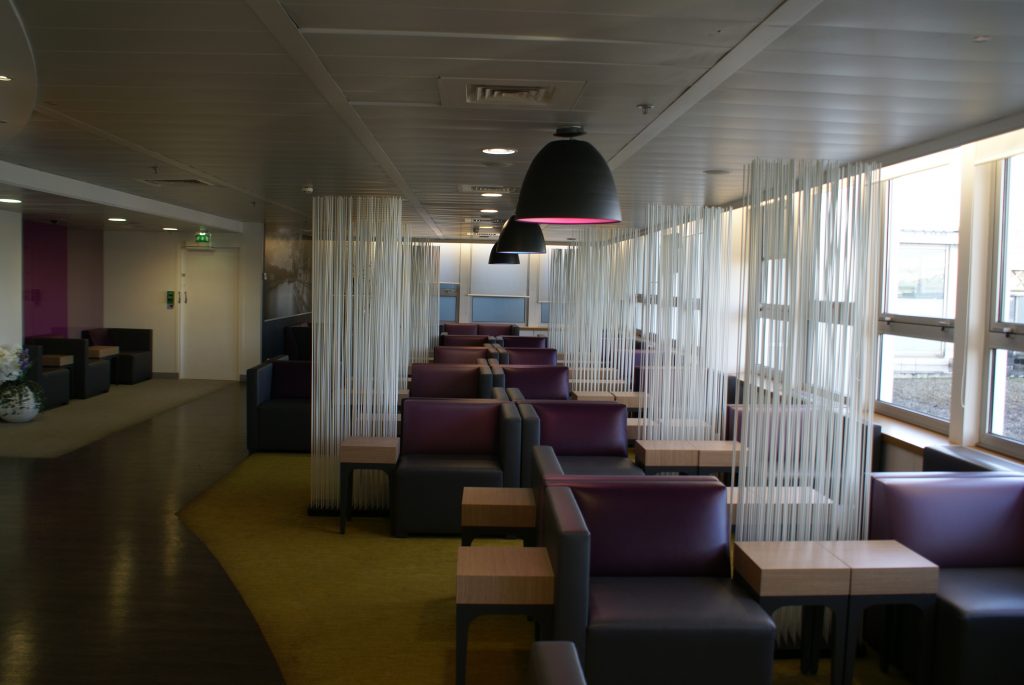 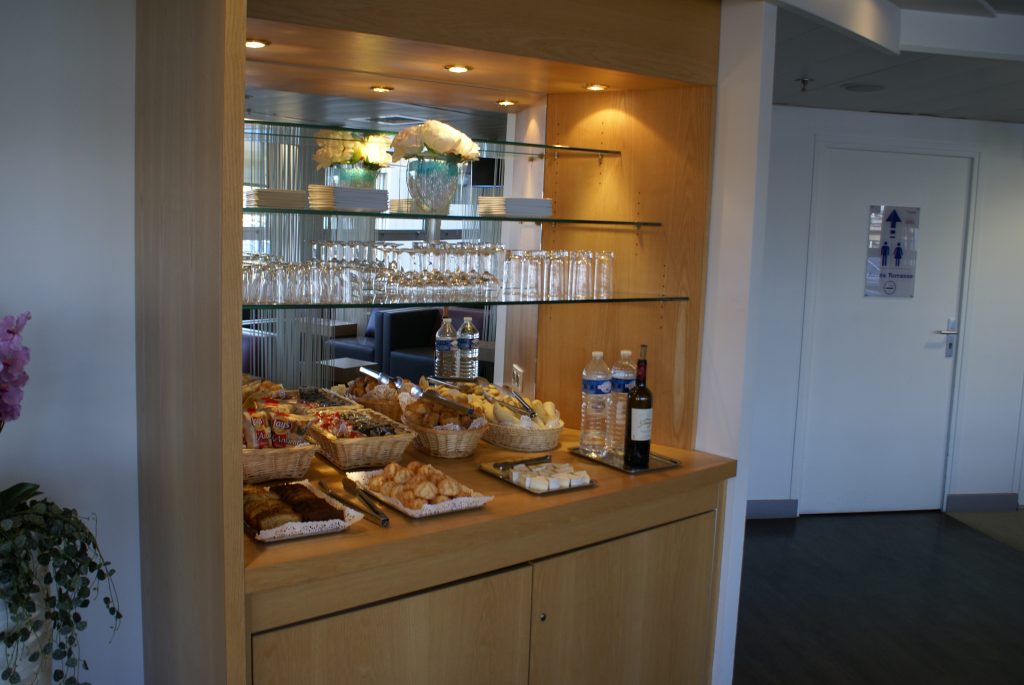 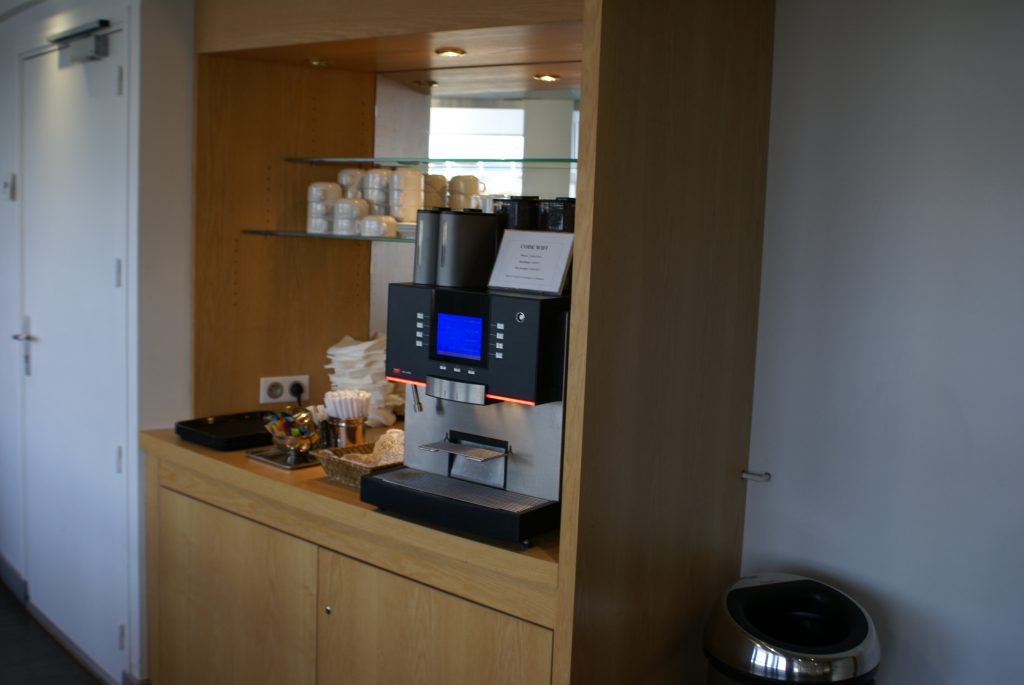 Jean-Paul Dubreuil, Chairman of the Air Caraïbes Supervisory Board, in a statement said, “It is with great pride that our family group takes delivery of its first A350 XWB, as part of a global order of four A350-900 and three A350-1000 aircraft that will operate in the Dubreuil Group’s aerospace division. Becoming the first French airline to have Airbus’ newest airliner allows us to measure the work accomplished by Air Caraïbes teams since 2003 and the opening of the transatlantic network. The arrival of this first A350 XWB aircraft is another major step in the development of our company – today more than ever the reference company for service to the Caribbean and the Caribbean.”

Air Caraibes’ inaugural flight of their first A350-900XWB was from Paris Orly to Pointe a Pitre. The new aircraft was set to take took off from Paris Orly at 11:00 a.m. and arrive in Pointe a Pitre eight hours and twenty minutes later at 2:30 p.m. local time. Currently, this route is served by an Airbus A330-300, which will mean the two aircraft will work alongside each other moving forward.

Upon entering the aircraft, frequent travelers will notice the cabin layout of the A350-900 is similar to that of the A330-300 including 18 seats in business class (Madas), 36 Premium economy seats (Caraibes), and 335 Economy seats.

The cabin is arranged in a 2-2-2 configuration in Business class, a 3-4-3 format for Economy, and a 3-3-3 for Premium Economy. The airline notes that the business class seats on the aircraft are fully flat, becoming the first destination in the West Indies to do so. 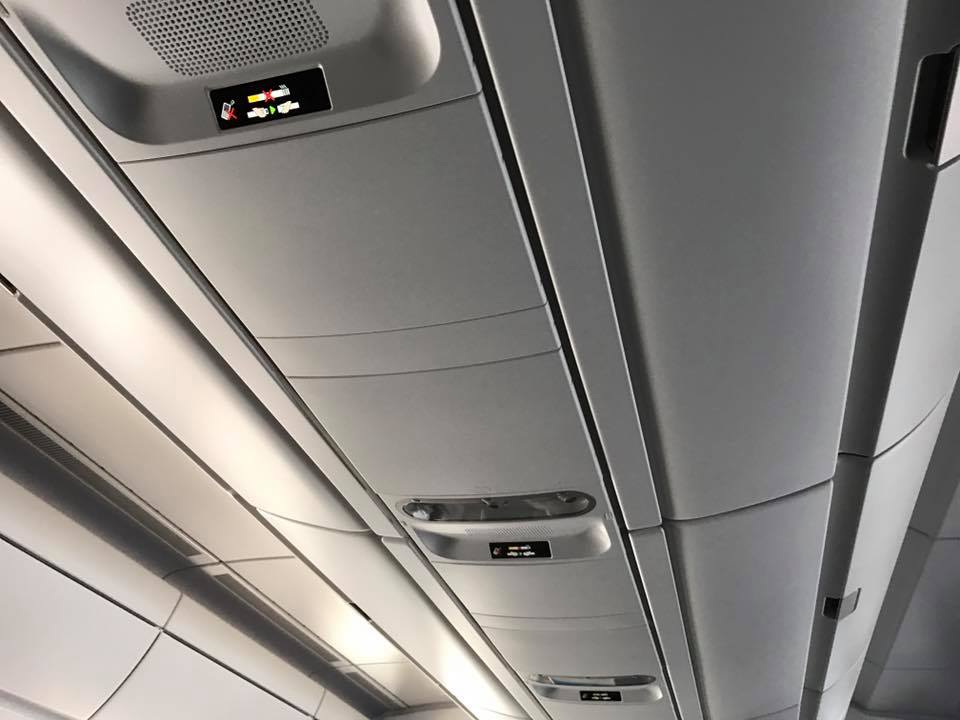 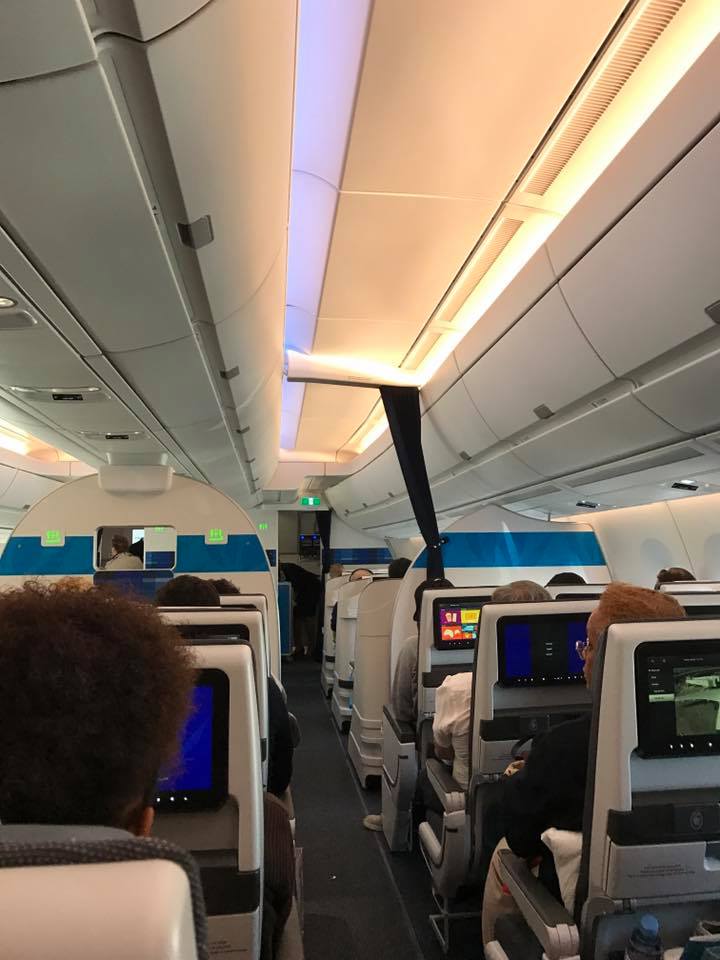 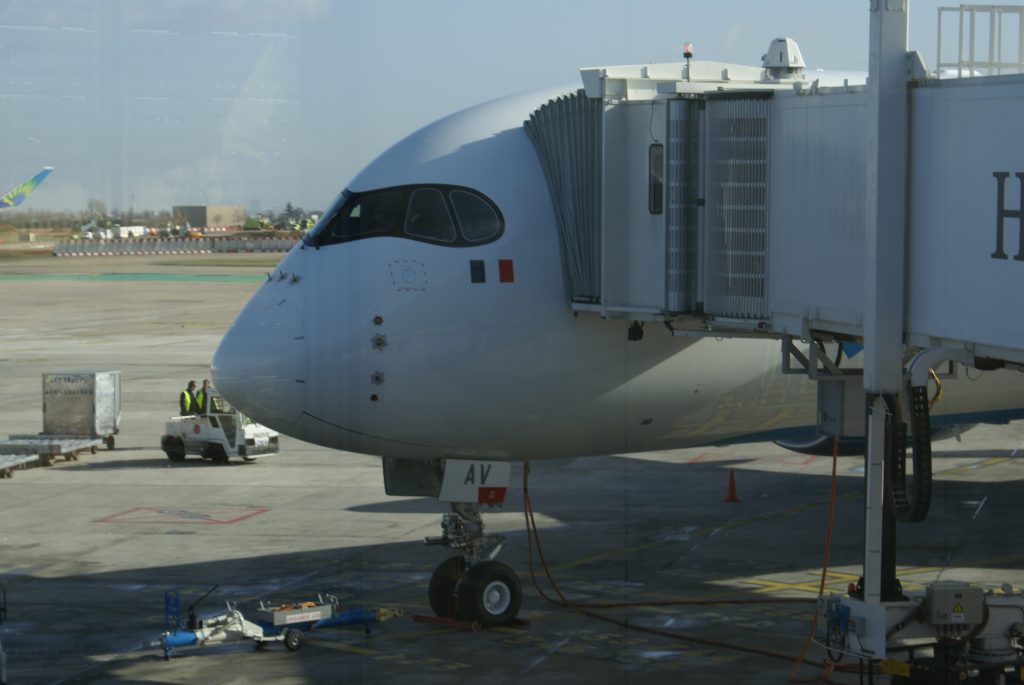 For the special event, I selected Seat 9G in Premium Economy, which included both a USB connection port and a regular power port so that I could charge two devices at the same. During the flight, I also took advantage of a decent selection of inflight entertainment, including both movies and English TV shows to choose from. I found the in-flight entertainment system was simple to use and very modern.

Unfortunately, the number of movies is quite low, meaning it would likely be a struggle for any passenger attempting to stay entertained on flights over 10 hours.

Upon boarding, I was also provided a pillow and blanket on my seat. Unlike many airlines, inflight menus and amenity kits are actually not provided until you are up in the air.

Shortly after takeoff, the cabin crew came by to offer newspapers. However, all newspapers were provided digitally via an iPad Mini. While I thought the intentions were great with this feature, I was quick to realize that none of the articles could be made available in English. The title of the page could be translated, but not the actual content. Thankfully I wasn’t planning on reading the paper for very long, but I am sure this would be a feature that the airline would need to ensure is corrected, especially for its business travel-focused flights. 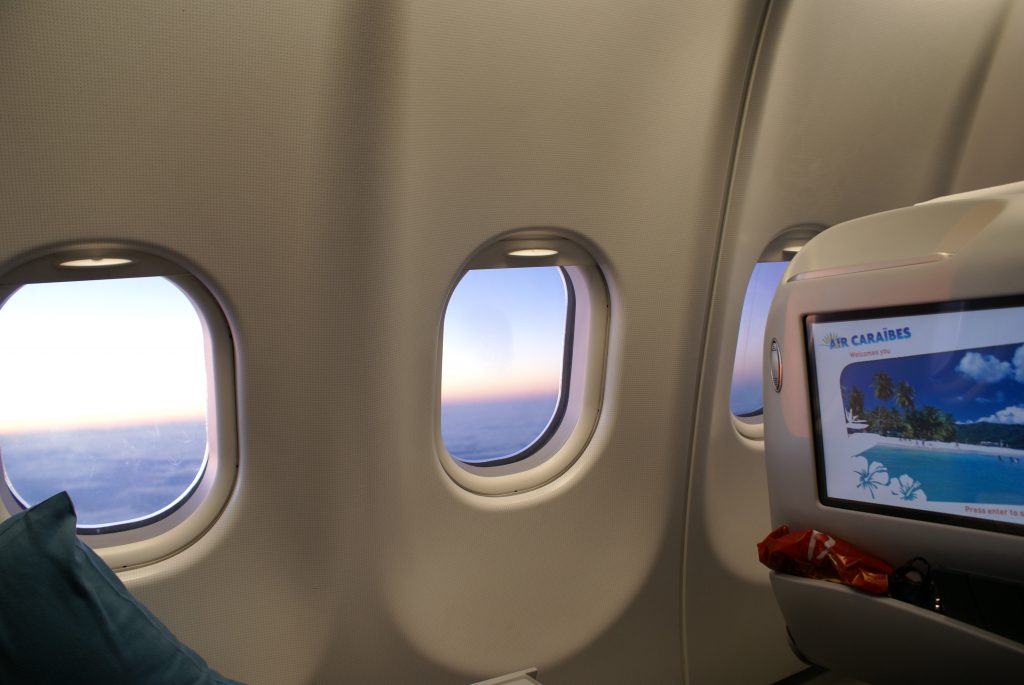 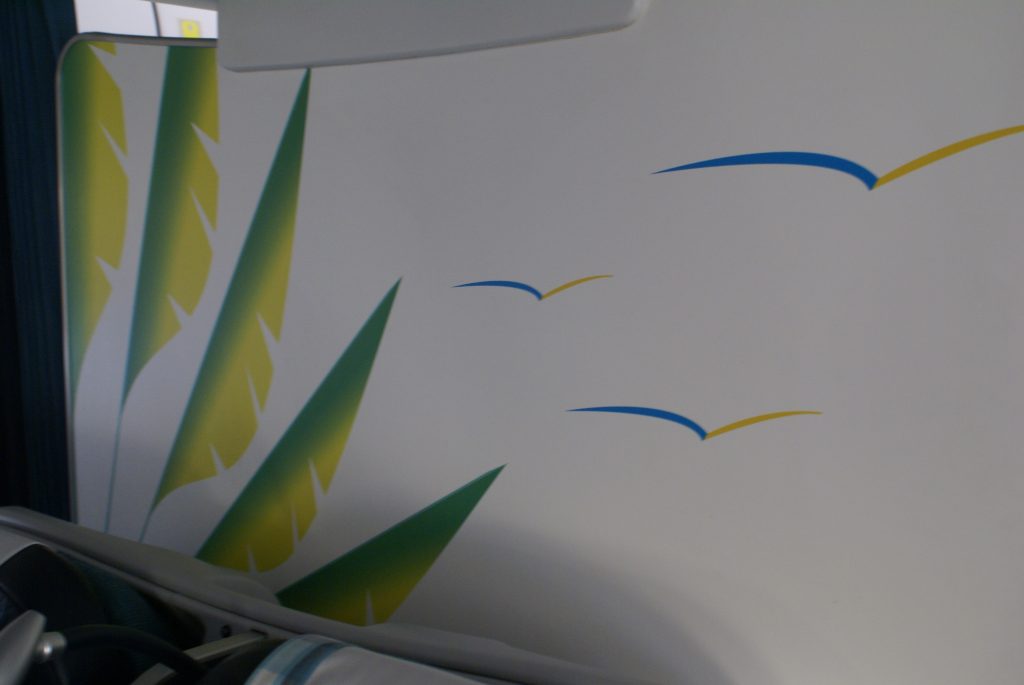 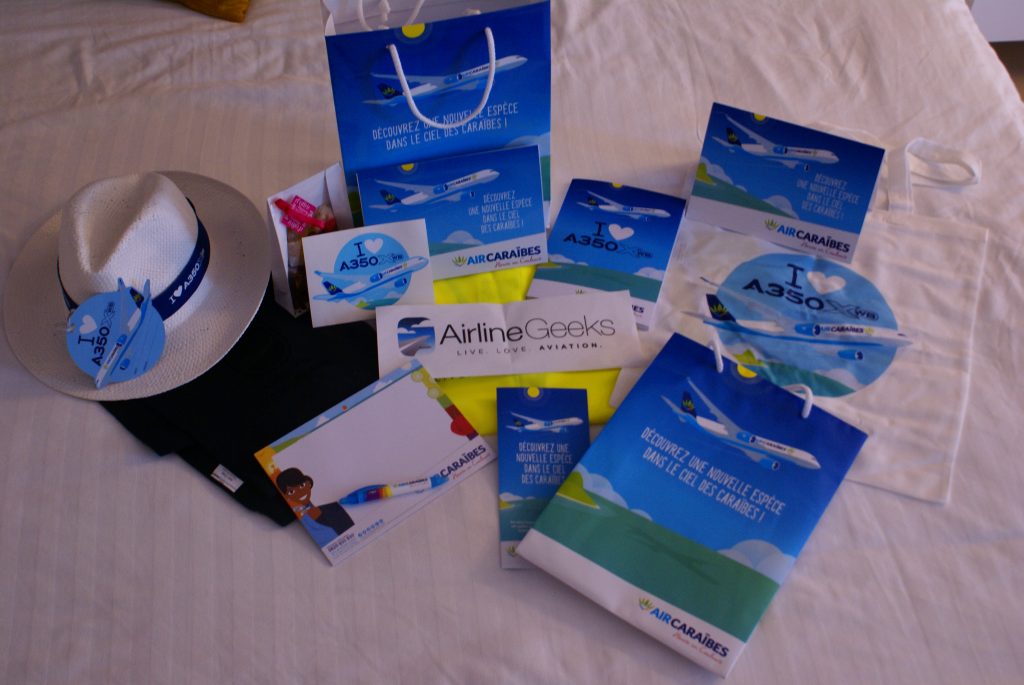 The airline offers complimentary meals in all classes of service. While inflight, I got to have a look at the menu in which they have a nice selection of food, including Tomato Tartar and Cod Parmentier, Sausage Rougail, Yellow Rice and Wilted Spinach, Salmon Fillet in a Beurre Blanc, Mixed Mashed Carrots and Broccoli, Camembert Cheese and Grapes, Apple and Banana Crumble as well as a Coffee or Tea with St Michel’s Chocolate Chip Cookies. Drinks listed were Punch, Champagne, Rum, Whiskey, Beer, Orange Juice, Tomato Juice, and Pepsi. I chose the Salmon Fillet in a Beurre Blanc which was satisfactory, on the basis of it being relatively dried but overwatered through reheating.

Following the flight, I was fortunate enough to spend some time with Air Caraibes CEO, Marc Rochet, to discuss several key issues the airline is facing today.

Q: With the large order of A350s, do you foresee these aircraft replacing the current fleet of A330-300s?

A: “The original plan was to buy the A350s over a prolonged period of time and slowly have them replace the fleet of A330s, but then something changed, and what changed was we saw that Air Caraibes was financially speaking very wealthy and the staff were very engaged in making the company very profitable, so we decided we should speed up the process. When you do this there are two ways you can go, you can either buy a company out or buy the planes yourself. We tried to buy Corsair and we tried to buy XL but the negotiations always failed. There were always a number of issues, but they are always complex stories, so at this time we decided to go about it ourselves. So we added on top of our A350 order some additional planes, bringing our total up to seven aircraft. We advanced the plan and Airbus were happy to sell the plane, and now the decision is made not to replace but to add on top. We are keeping the A330s for two reasons; one is that the decision is now made to add on top of the A350s [wanting additional capacity] and the second is because we felt as though the A350 is too big for some routes, both for passengers and freight. We had 14.6 tons of freight onboard the last flight, so it is a big freighter and there are many airports that do not support that size, so today we keep the A330s as well as the A350s. So now the question is are we going to refurbish the A330s? The decision has already been made to refurbish the A330s with some being done in May and June this year, and we have a slot to do another one in the pre-winter season, but I think now we will make a move to refurbish all the A330s with a point of view of it making economic sense, as we want to refurbish the A330s and we will make the same sort of decision on all the fleet.”

Q: Given the extended range that the A350 offers, are we likely to see Air Caraibes move into the Asian market?

“The A350 has a very long range, but you have two ways of looking at the aircraft. First off, the Airbus A350-900 cabin layout for companies like Cathay Pacific and Qatar in terms of number of passengers on board is low. Air Caraibes is the first airline to use the A350 with 389 passengers onboard, so if you take the 389 passengers with the Air Caraibes load factor which is 91-92% and you put 14 tons of freight into the belly the range then becomes not that much. But the aircraft is good when you have a full load and the range is good for a full load, so of course today we have no plans to go to Asia. Unfortunately if the airplane is full with both it cannot fly to Asia, but I think there will be in the future another version of the A350 I think Airbus is going to work on the family the 900/1000 and probably another one, and if one day we move to long hauls we may have to choose another configuration, but today the freight capacity for the A350-900 is good and we cannot take a longer range.”

“We looked at the 787, 4-5 years ago, but at this time Boeing was more focused on the 787-8/9 and not that much on the 787-10. If you look a the 787-8/9 it is a smaller plane that the A350…the A350 is the right sized plane for the routes here, I am not saying it is the best one. To give you an idea, the traffic for Paris to Guadeloupe with competitors included more than one million passenger per year, Paris to Tahiti in the Pacific which is now served by Air Tahiti it’s less than 200,000 so they choose the 787 as they feel it is the right choice for them and the A350 is the right choice for us. The second reason is because and I am still round of that is that we are still a small company and a small organization to deal with Airbus who is right next door in Toulouse is easier for us than to go to Seattle, which is all money at the end of the day. The third point is that we were totally convinced that we will be able to fly the A350’s and A330’s in a crew mixed fleet. What this means is that in a very short period of 1-2 weeks, one Captain and one Cabin Crew can fly both airplanes almost at the same time, they can fly Paris to Pointe a Pitre in the A350 and then return on the A330, which why we choose the A350 and this mixed fleet is also very profitable for us.”

While the A350XWB offers higher passenger numbers and increased range, there remains one problem for Air Caraibes; the size of the aircraft.  Due to it having many seats and plenty of freight capacity, it is difficult to fly to many other Caribbean islands.

Air Caraibes said that they know their market, which is to be able to travel between Paris and the Caribbean in an element of luxury for a fairly low cost. The airline hopes that by using the two different aircraft, the A350 and A330, it can ultimately serve numerous markets that are right-sized based on demand.