We’ve all heard the stories and seen the pictures: a beautiful September morning 16 years ago that forever altered the landscape of America and the aviation industry. If you’re old enough, you recall where you were on that fateful day.

These three American Airlines managers do as well. They all had direct and immediate involvement in American Airlines flight 77. Their compelling stories of tenacity and teamwork give us a firsthand perspective into the tragic day.

With about 80 years of combined experience in the airline industry, Kent Powell, Dana LeRay, and Dennis Hazell saw just about everything during their tenure as managers at American Airlines’ Washington Dulles International Airport station. Nothing, though, could prepare them for what would follow as flight 77 pushed off of gate D26 on a clear morning outside of the nation’s capital.

The Day Everything Changed

Each played a different role on 9/11; Powell and LeRay were customer service managers for the airline, and Hazell was the airline’s general manager at Dulles. LeRay was on duty that morning, supervising a team of colleagues who oversaw the operation.

“[There was] nothing abnormal about the start of that day,” said LeRay. Her shift started at 5:30 a.m., when part of her job was to ensure that the aircraft were ready for departure after overnighting. So it was LeRay and her team on duty when the Boeing 757, N644AA, operating as flight 77, was loaded, boarded and pushed off the gate right at 8:20 a.m., destined for Los Angeles, and took off normally from Dulles’ runway 30.

After the news broke that an airplane had hit the World Trade Center, “we didn’t think a whole lot of it at first,” LeRay remembered. “Then came the diversions.”

Powell, who heard the news hours before the scheduled start of his shift, knew they’d likely get diversions from around the East Coast. “I just knew Dana would be swamped,” Powell said during an interview alongside LeRay and Hazell. “She would need help. I wasn’t supposed to start until 2 o’clock, but I went ahead and jumped in the shower and headed in to Dulles.”

Leading the airline’s Dulles operation at the time, Hazell was notified soon after the initial attacks. “I was actually at the Exxon station in Ashburn…that’s when I got a phone call from my boss,” Hazell added.

Dick Mally was the regional managing director at the time. He told Hazell to get to the airport and secure his lifts, the stacks of paper tickets pulled as passengers boarded their flights.

LeRay says she was upstairs in the terminal when she first started hearing the first reports of what was happening and headed downstairs to the operations area. “I can remember the tower calling operations and saying to me, ‘have you heard from [flight] 77?,” LeRay said. Just like securing the lifts on Hazell’s end, she noted that this was the point of realization, where the gravity of the situation set in. “At that point we said, pull every list you can.”

Powell says he recalls turning on the radio for a brief moment on his way to the airport. When he heard confirmation that American Airlines flight 77 had hit the Pentagon, “I really did almost hit the toll booth,” he said. “I pulled off to the side there and just had a moment.”

For Powell, LeRay, and Hazell, the loss was deep, especially since a dear friend and colleague was onboard. Mary Jane ‘M.J.’ Booth had started at Dulles soon after the airport opened in 1962. At the time, she was an administrative assistant for Hazell. “I would be remiss if I didn’t say that everybody on this airport knew M.J.,” Hazell said. 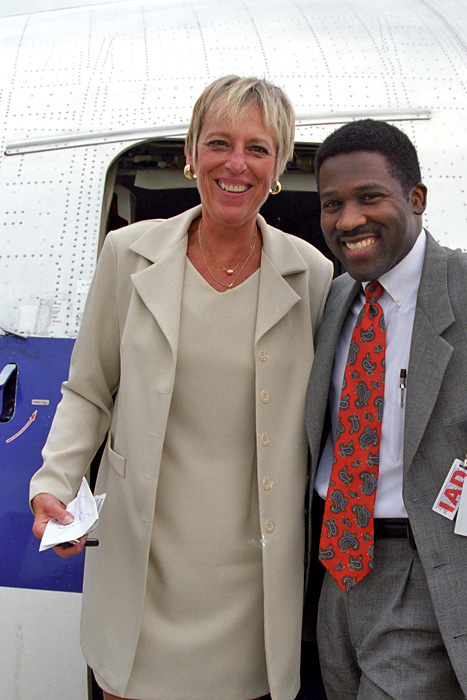 Hazell and M.J. next to an American Airlines MD-11 (Photo: Dan Brownlee)

M.J.’s love for the airline industry, her elaborate party planning, and people skills set her apart as the so-called ambassador of Dulles. She boarded flight 77 in order to attend an American Airlines Credit Union meeting in Las Vegas. Since she knew the crew and flight loads were better, M.J. decided to fly through Los Angeles instead of Dallas/Fort Worth.

“It was a small community out here,” Powell said, noting M.J.’s ability to get along with just about anyone at the airport. In June 2001, M.J. celebrated her 45th anniversary with American Airlines. “[She] loved the business,” Powell added. Many employees had close ties to the crew of flight 77, all of whom were Washington, D.C.-based.

Close Ties Across the Airline

“If there’s anyone you want in the seat of an airplane, in good times and/or bad, that is the guy that you want,” Hazell said referring to Captain Burlingame. The pilot received similar feedback from both Powell and LeRay, with Powell describing him as “a pilot’s pilot.”

Captain Burlingame was married to an American Airlines flight attendant, Sheri Burlingame. He would have celebrated his birthday on Sept. 12. 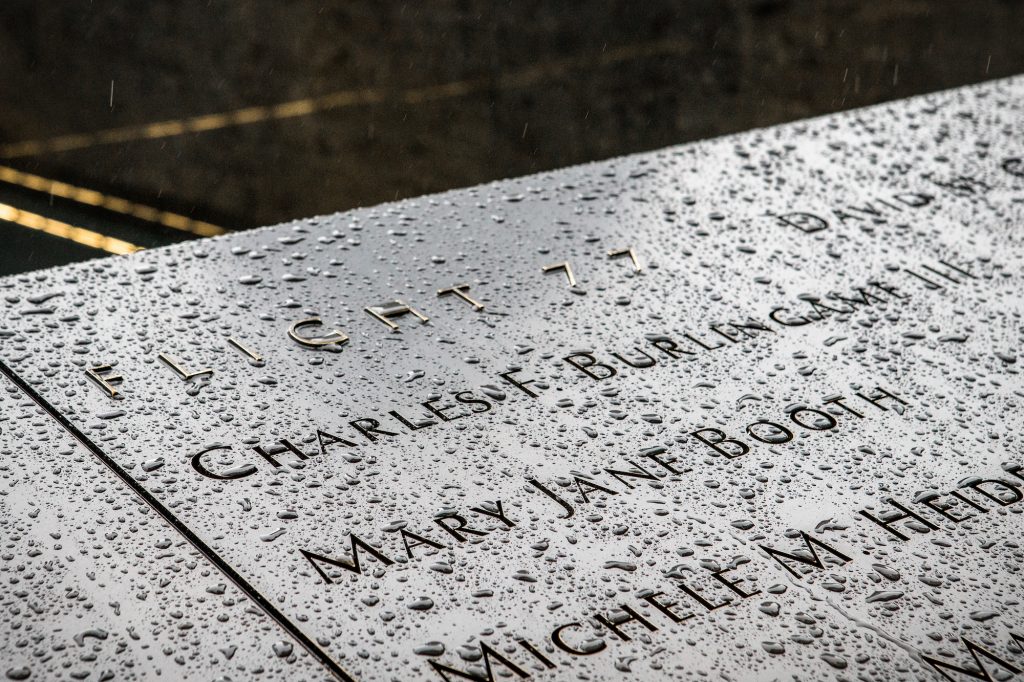 Captain Burlingame and M.J.’s names can be seen on the 9/11 memorial in New York City (Photo: J. David Buerk Photography)

Powell also stays in touch with the families of one of the passengers to this day. “[I] stay close with that family, they’re wonderful,” Powell said.

The aftermath was dark; they had never seen anything like it. Following the attacks, the airspace in the U.S. was closed, leaving aircraft parked at airports around the world. The clicking of engine rotors in the wind still reminds Powell of that day. “It was deafening silence,” Powell remembered. “I thought what a strange noise, someone has left something running and I stuck my head out of the breezeway…here is a 767 parked…it was the fan blades.”

“It was a beautiful morning, I recall the fan blades going round-and-round,” he continued. “Still to this day when I hear that sound, the hair on my back stands up.” 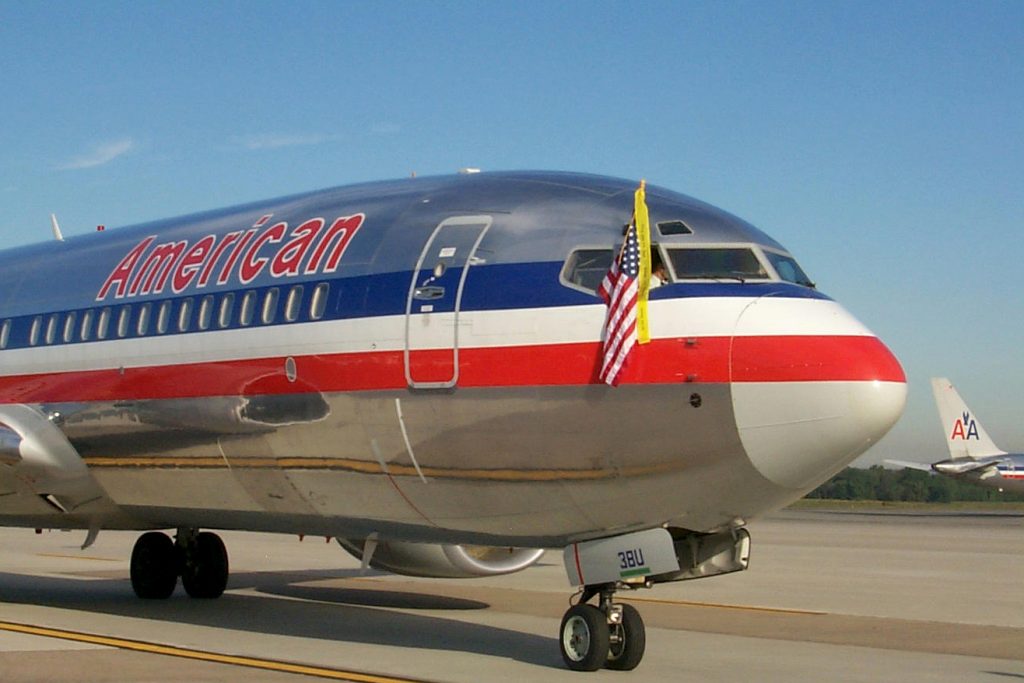 Despite going through such a harrowing event, Powell, LeRay, and Hazell never got off the horse. To this day, all of them still work in the industry. Powell is a public relations and field communication specialist for American Airlines in Washington, D.C., LeRay is an elite services manager for American in Charlotte, N.C., and Hazell is the Customer Service Manager for the Metropolitan Washington Airports Authority at Washington Dulles International Airport.

The airline business didn’t leave heir blood, as they never intended to go elsewhere. “As we walked through the hours and days after, setting up the command center if you will, and to deal with the customers and their surviving family members…American Airlines got permission to send two flights, one went to Boston and one to Dulles,” added Hazell.

“It was just us holding down the fort. But when we got permission to get those airplanes in the air…those RB211 engines broke through the silence of the night,” he noted.

Hazell also observed the resiliency of the airport employees. Throughout the days following September 11, fleet service clerks were driving in tugs on the flightline, checking airplanes to make sure there was nothing abnormal or out of place. “We had a requirement all of a sudden to kind of guard our airplanes,” Hazell said. “And boy, I’ll tell you that sense of pride gives me goosebumps still thinking about it.” 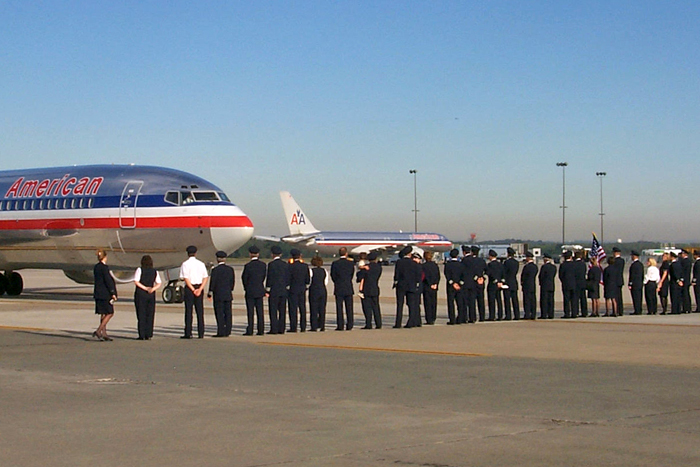 AA975, the first flight to depart Dulles after Sept. 11th attacks, is sent off by DCA/IAD based ground and flight crew (Photo: Dan Brownlee)

Airport teams across the country were required to search passengers’ carry-on bags and do their own security checks before the Transportation Security Administration (TSA) was set up. “I have honestly never complained much about a long TSA line because I so appreciate their role,” Powell added during the discussion.

An Increase in Strength

As the roundtable discussion came to an end, Powell, LeRay, and Hazell classified their experience not as a setback, but as an increase in strength.

“I wouldn’t wish it again on anyone, but I know that I’m a better person for having gone through it and I think I’m a better manager…it really does put it in perspective,” Powell shared. 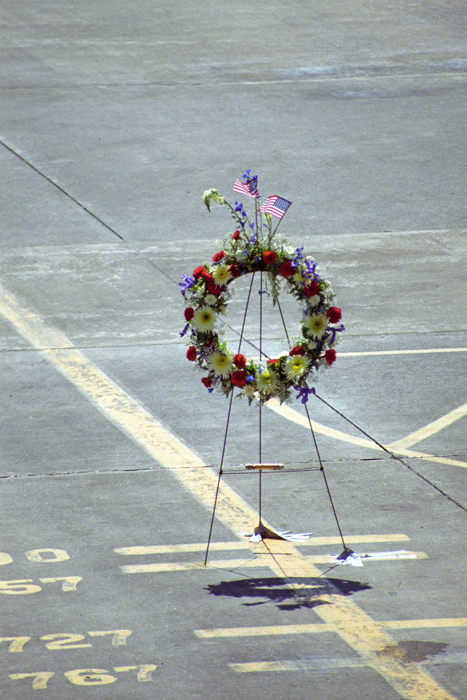 “These emergencies happen and while they’re very sad, it changes you and it can only change you for the better,” Hazell added.

“It certainly made us stronger,” LeRay said.

There’s no question that being a part of the September 11 attacks from their perspective is emotionally difficult, but by sharing their story, Powell, LeRay, and Hazell did not want to dig at their scabs, but instead reflect on the airline industry as an emblem for resilience.

Listen to the audio from the discussion:

Follow Ryan
Ryan Ewing
Ryan founded AirlineGeeks.com back in February 2013 and has amassed considerable experience in the aviation sector. His work has been featured in several publications and news outlets, including CNN, WJLA, CNET, and Business Insider. During his time in the industry, he's worked in roles pertaining to airport operations and customer service while holding a B.S. in Air Transportation Management from Arizona State University along with pursuing a concurrent MBA and law program. Ryan has experience in several facets of the industry from behind the yoke of a Cessna 172 to interviewing airline industry executives. In addition to supporting AirlineGeeks, Ryan works full-time in the aviation industry.
Follow Ryan
Latest posts by Ryan Ewing (see all)
9/11airline staffairlinesAmerican AirlinesDullesFeaturedNever ForgetSept. 11
Related Stories
[ Related Stories ]April 26, 2022 8:00 am ET
By Parker Davis 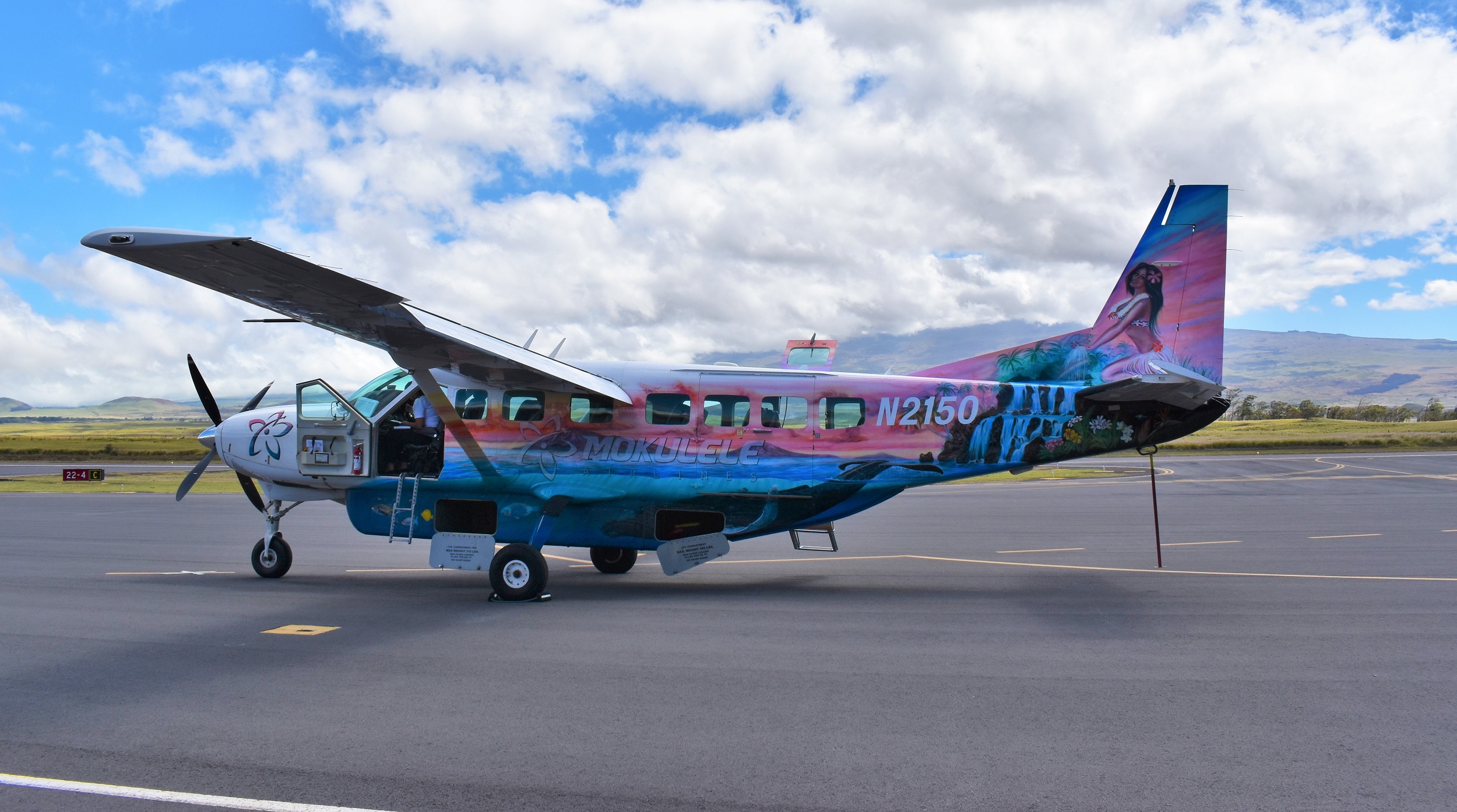