The CS100 on display in Atlanta (Photo: AirlineGeeks | Alex Navitsky)

In an unexpected and shocking outcome, the U.S. International Trade Commission voted unanimously in favor of Canadian builder Bombardier, stating that the 108-seat CS100 does not represent a threat to the sales of Boeing’s 737-700.

The dispute started in April 2017, when Boeing filed a complaint with the US Commerce Department claiming that its 737-700 version of the 737 family was unable to compete in a fair game after Bombardier offered “absurdly low prices” to Delta, who signed an order of 75 CS100 plus 50 options. As per Boeing’s main line of defense, those prices were impossible without Canada — and specifically, Quebec government subsidies.

Remarkably, the unanimous vote showed that despite Bombardier’s reluctance to answer questions to the Department of Commerce, Boeing was unable to provide evidence that the CS100 was, in fact, damaging the weak sales of the Boeing 737-700. Slow in orders and customers, the 737-700 and its successor, the 737 MAX 7, have not attracted the market regardless of C Series influence.

Boeing’s failure to prove the “threat of harm” is a major setback both for the company and the 737-700 and MAX 7 products.

Also, the ITC vote is nullifying the 299.45 percent tariff set by the Department of Commerce on U.S.-bound Bombardier C Series jets.

Bombardier and Delta’s positions remained the same throughout the entire process; the 737-700 is a significantly larger aircraft than the CS100, thus they are not competing in the same market segment.

Delta’s position goes a little further: at the time of the tenure, Boeing just offered second-hand Embraer 190s. In its deposition during the ITC proceedings, Delta simply said that Boeing did not offer anything that was considered viable by the company.

Even though a Boeing appeal is more than expected, either in U.S. courts or in the World Trade Organization,  it is a bittersweet victory for Bombardier. Not so long ago, when everything seemed dark and gloomy for the C Series program, the builder reached an agreement with Airbus, who will take 50.01 percent of the program at no cost, in exchange for a production line in Mobile, Ala. and for adding the C Series to Airbus’ portfolio. Airbus delivered a major blow to its biggest rival, at practically no cost.

Delta is expected to introduce the C Series into service this Spring. Nevertheless, it is not clear if the legal process has deferred that expectation for later this year. 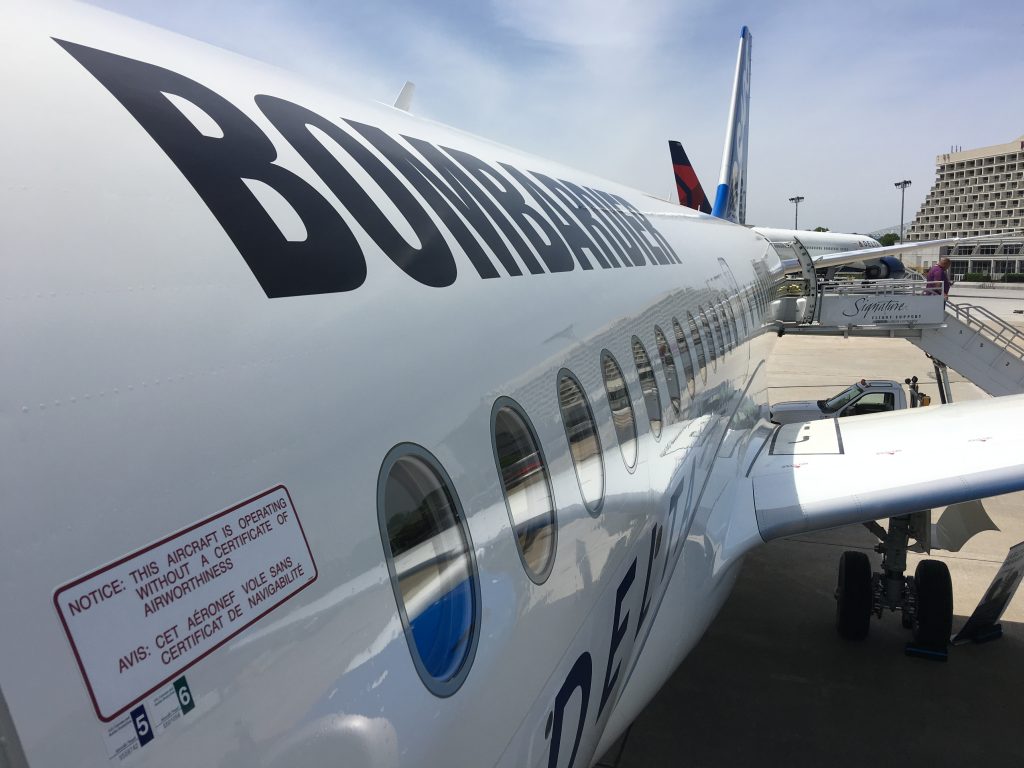 “Today’s decision is a victory for innovation, competition, and the rule of law. It is also a victory for U.S. airlines and the U.S. traveling public. The C Series is the most innovative and efficient new aircraft in a generation. Its development and production represent thousands of jobs in the United States, Canada, and the United Kingdom. We are extremely proud of our employees, investors and suppliers who have worked together to bring this remarkable aircraft to the market. With this matter behind us, we are moving full speed ahead with finalizing our partnership with Airbus. Integration planning is going well and we look forward to delivering the C Series to the U.S. market so that U.S. airlines and the U.S. flying public can enjoy the many benefits of this remarkable aircraft,” Bombardier said in a statement, reassuring the commitment with Airbus.

“We are disappointed that the International Trade Commission did not recognize the harm that Boeing has suffered from the billions of dollars in illegal government subsidies that the Department of Commerce found Bombardier received and used to dump aircraft in the U.S. small single-aisle airplane market. Those violations have harmed the U.S. aerospace industry, and we are feeling the effects of those unfair business practices in the market every day,” Boeing added.

“Boeing remains confident in the facts of our case and will continue to document any harm to Boeing and our extensive U.S. supply chain that results from illegal subsidies and dumped pricing. We will not stand by as Bombardier’s illegal business practices continue to harm American workers and the aerospace industry they support. Global trade only works if everyone adheres to the rules we have all agreed to. That’s a belief we will continue to defend.”

Delta Air Lines also came out with a statement saying, “Delta is pleased by the U.S. International Trade Commission’s ruling rejecting Boeing’s anti-competitive attempt to deny U.S. airlines and the U.S. traveling public access to the state-of-the-art 110-seat CS100 aircraft when Boeing offers no viable alternative. The airline looks forward to introducing the innovative CS100 to its fleet for the benefit of Delta’s employees, customers and shareowners.”

Even in the case of an appeal, Boeing will have to work and rethink its strategy to prove the damage and sustain 737-700 and MAX 7 programs. In a rare and shocking turn of events, the Everett giant is the underdog in this fight.