Aerolineas Argentinas Prepares for a Clean Fight in Domestic Destinations

In an anticipated move, Aerolineas Argentinas revealed last week that it will retrofit the interior of its domestic fleet to eliminate Club Economy class and move forward with a single class operation.

In a press event held at Aerolineas Argentinas’ headquarters, CEO Mario Dell’ Acqua, the Argentina Minister of Transportation Guillermo Dietrich, and Chief Of Staff Marcos Peña, announced the decision as a positive aspect for massive air transportation and a part of what it is called the “Revolution of the Airplanes”, a governmental plan to double the commercial aviation offering in Argentina.

Currently, the Boeing 737-800 and Embraer 190AR fleet have eight Club Economy and 162 Economy seats. The idea is to provide a standard 186-189 (100-114 for Embraers) seat single class layout to better compete with domestic rivals.

Both Flybondi and Andes Líneas Aéreas use a 189-seat layout, and Norwegian Air Argentina intends to use the 186 standard that many European counterparts have adopted. 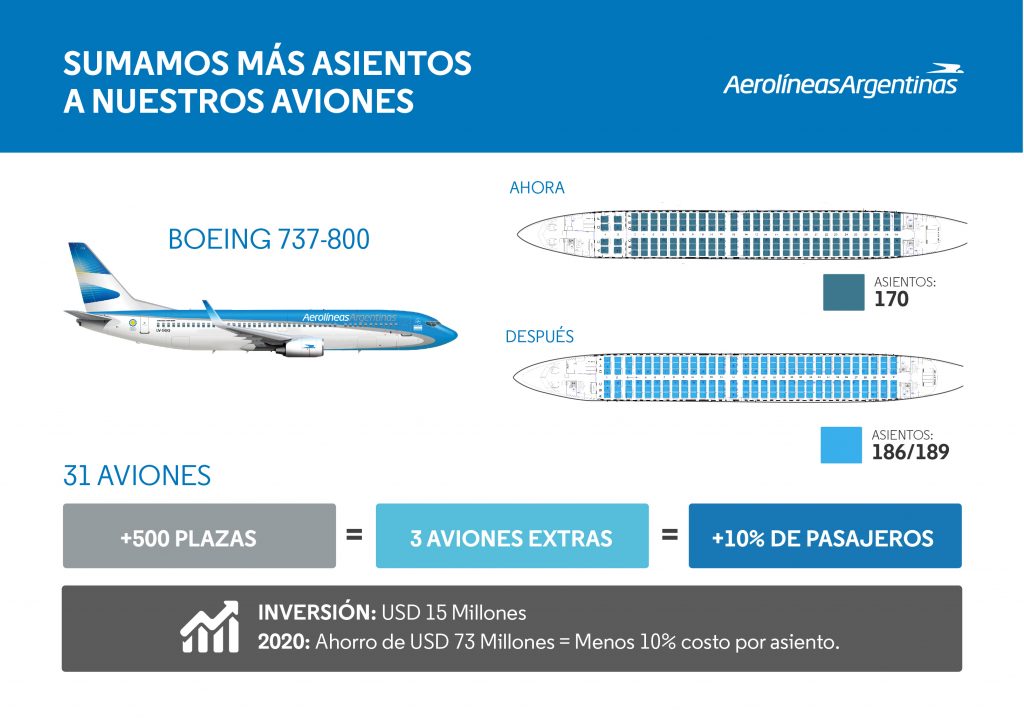 The decision implies an investment of around 15 million, with an expected time of completion of one year. The plan will affect the 31 Boeing 737-800 and all 24 Embraer 190AR currently in Aerolineas’ fleet. While the bid for the 190’s replacement is still ongoing, AR management is confident the retrofit will improve the chances for the aircraft to find a second-hand customer.

The additional seats in domestic flights -the core of Aerolineas Argentinas’ operation- would represent both saving costs and increasing income. It is expected that by 2020, the elimination of costs related to the Club Economy offer and the occupation of the economy seats will represent a 73 million revenue for the airline’s operation. In the context of a state-owned company that has lived from taxpayers’ money subsidies and aims to request only 90 million for 2018, the change will impact positively on the economics of the flag carrier.

The 737 MAX fleet won’t suffer any changes, as they intend to fly to longer regional route. Just last night, the first flight to Punta Cana, Dominican Republic was operated for the first time with LV-GVE, the second aircraft of the four already received. The 3,728 miles journey in a narrow-body is one of the longest of the type.

The extra 500 seats in the aircraft which will be retrofitted represent almost three full planes of income on the combined operation. As Club Economy load factors were low, and most of the time the seats were filled with frequent flyers obtaining free upgrades, the airline considers it a smart move in order to eliminate a cost factor that impaired the company from competing in a fair environment with other carriers. Despite some negative reaction, the consensus is that, in order to strive, Aerolíneas needs to adapt, and it is finally catching up with the pace of its competitors.