Just over a year after Delta Air Lines announced its plans to build a Sky Club at Austin Bergstrom International Airport during a visit to the Austin Chamber of Commerce, the airline celebrated the completion of its newest lounge space in the U.S. on Monday ahead of its opening to passengers on Tuesday, May 21.

The lounge marks the second Delta Sky Club in Texas following the Terminal E Sky Club located at Dallas Fort Worth International Airport. This is the second Sky Club Delta has opened in 2019 with Phoenix’s 7,500 square foot lounge opening earlier this year marking the first club for the airline in Arizona. 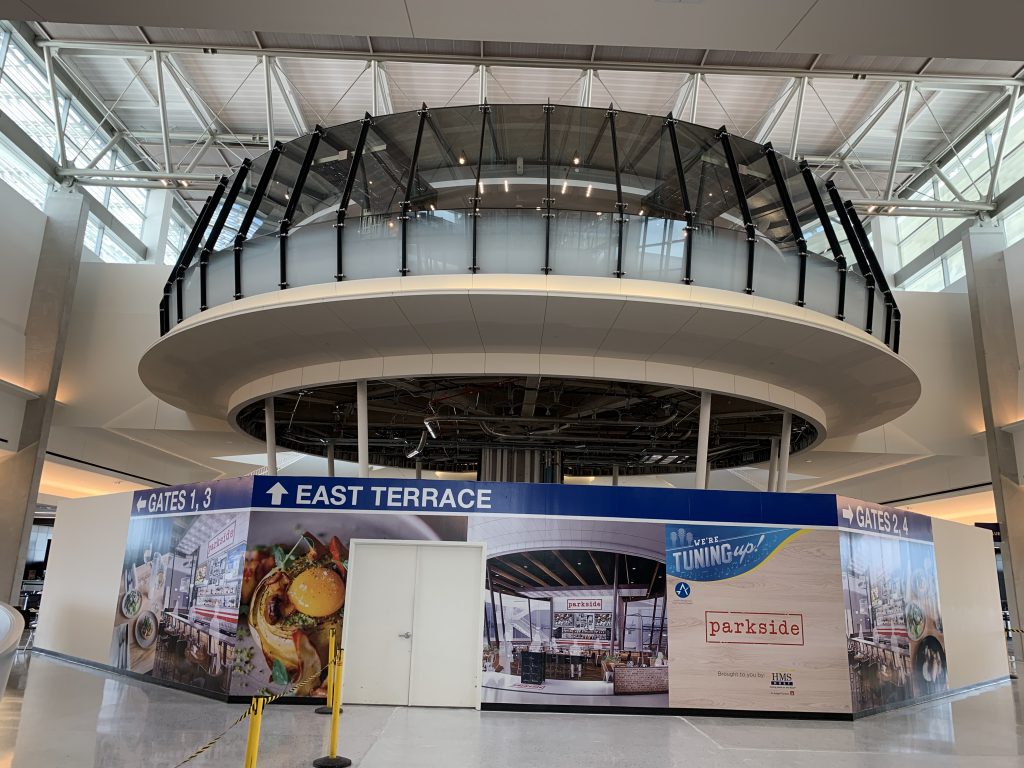 The central part of the Delta Sky Club visible from the departures level in the new east terminal expansion in Austin. (Photo: AirlineGeeks | Mateen Kontoravdis)

The lounge is part of the Barbara Jordan Terminal east expansion which opened three months ago. The nine-gate expansion is aimed at alleviating crowding issues in the airport and allows the airport to comfortably handle 15 million annual passengers after the airport handled 15.8 million passengers in 2018 in a terminal built to handle 11 million. Visible from the opposite side of the concourse, the intriguing, elevated center of the club is visible to all passengers and creates a futuristic look at the east end of the terminal. 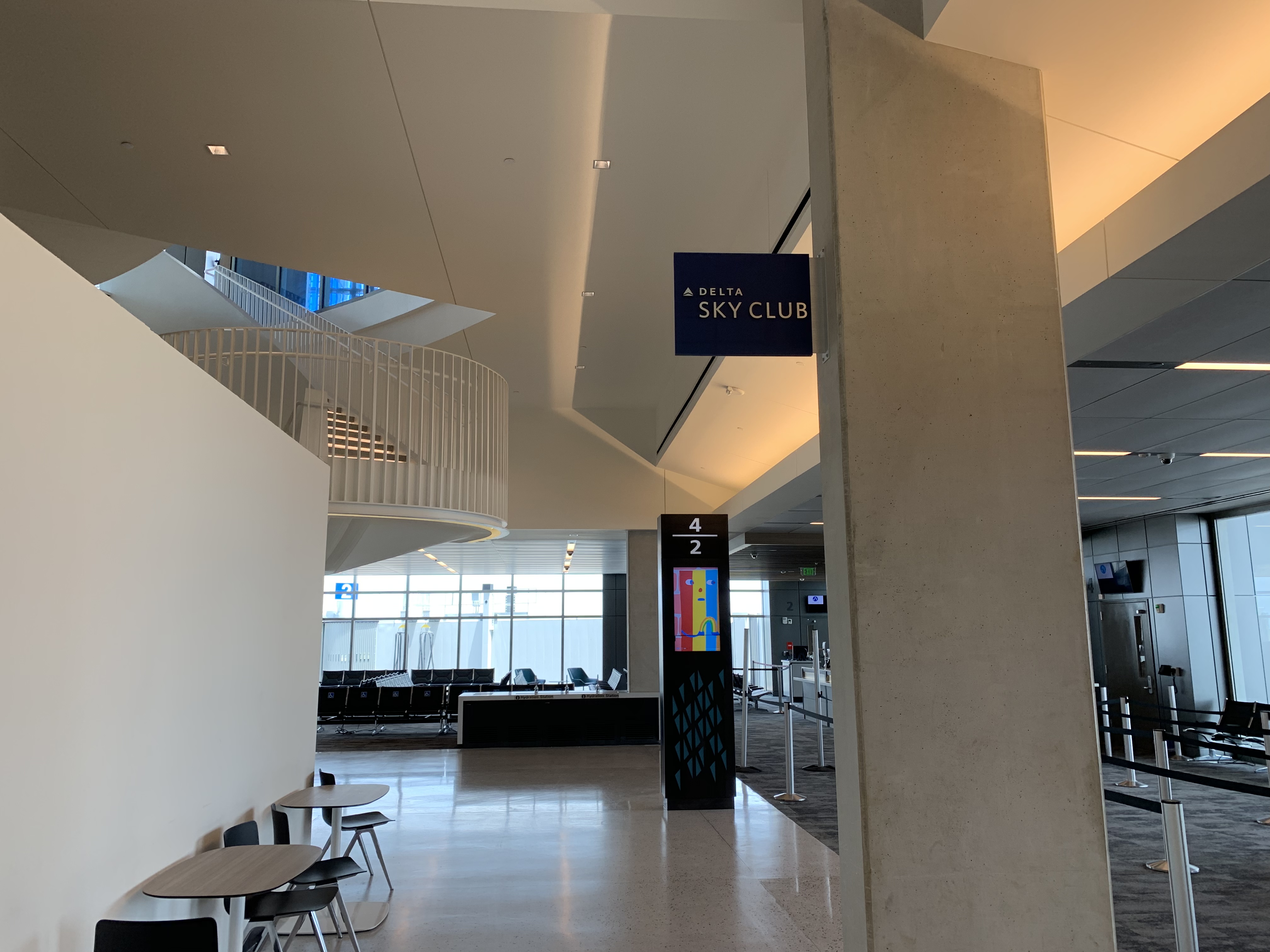 The Sky Club can be found by following signage at the east end of the terminal.(Photo: AirlineGeeks | Mateen Kontoravdis) 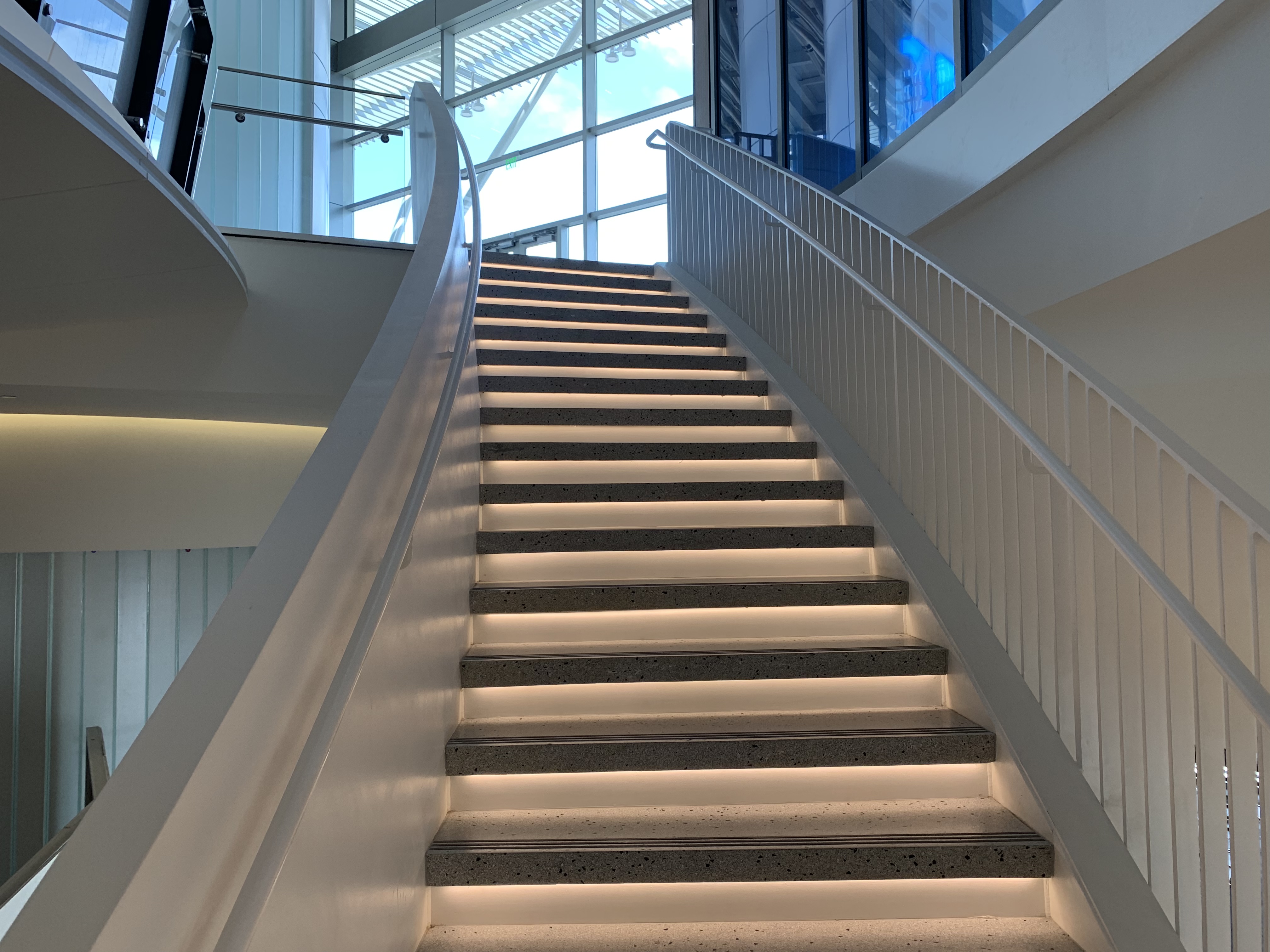 Signage near international gates two and four leads passengers up a stairwell to a quiet secluded seating space and the new outdoor patio open to all ticketed passengers. 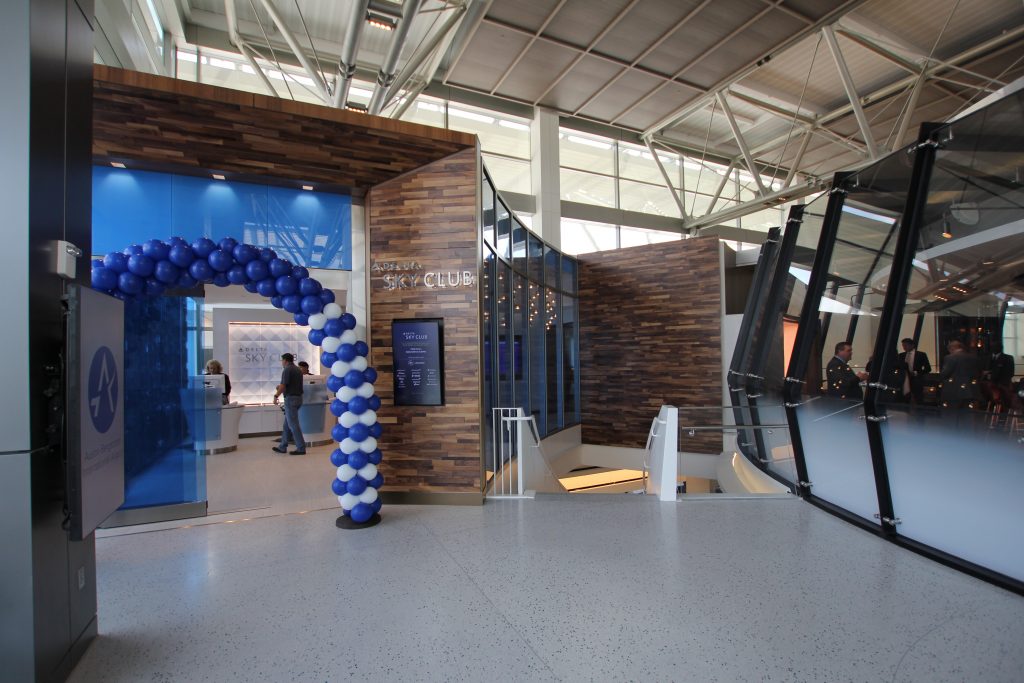 Like all other clubs in the network, access is restricted and while the club is technically open to all qualifying passengers flying on a SkyTeam airline or with a membership, Delta is the only SkyTeam carrier serving Austin right now. 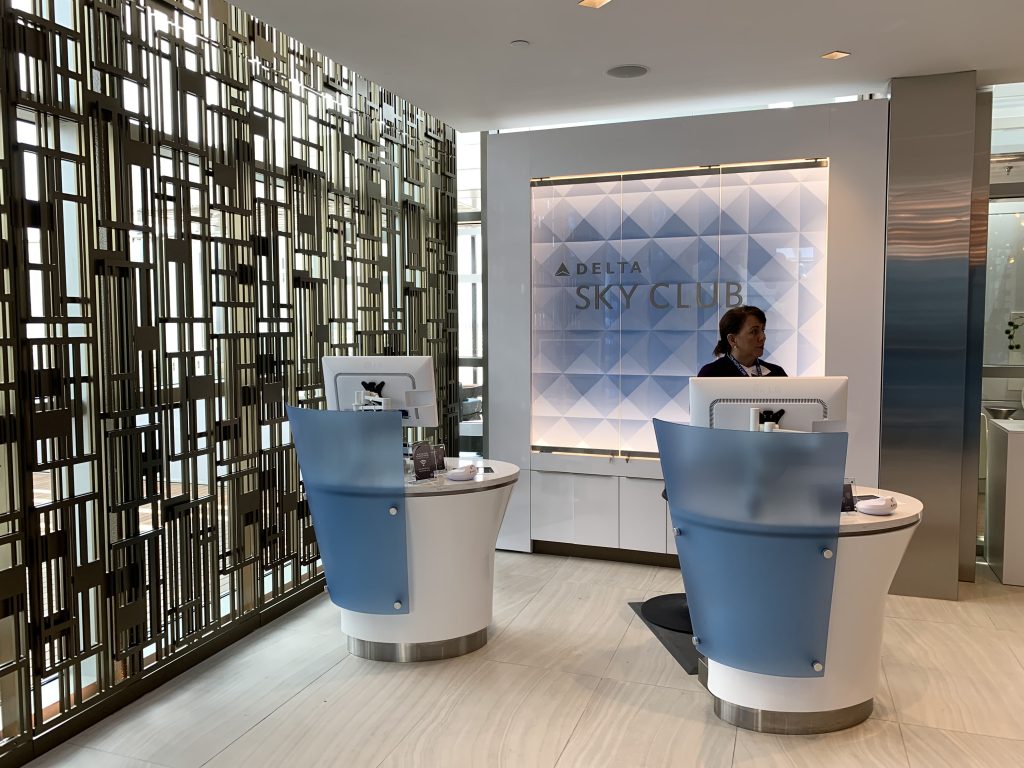 Inside the club, the space is divided into four distinct sections. To the left is the beautiful new covered Sky Deck, an outdoor space for guests. When United Airlines opened its boutique United Polaris Lounge in Houston last year, the airline’s Director of Premium Services said an outdoor patio is not a good way to use space because customers will usually only check it out once. Unlike its competitor, Delta has found success with its Sky Decks in major hubs such as Atlanta and New York, making it an easy choice to add one in Austin as well. 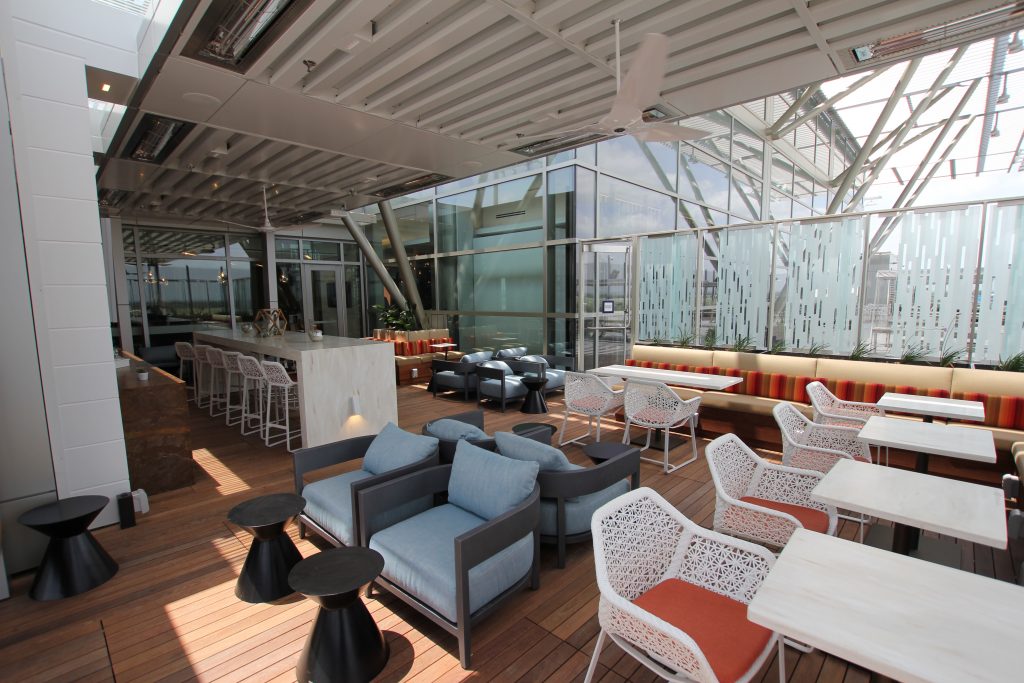 The outdoor Sky Deck is shaded and the glass wall separates the Sky Club with the airport’s terrace. (Photo: AirlineGeeks | Mateen Kontoravdis)

The designers definitely designed the Sky Deck with the Texas summer heat in mind. There is ample shade and fans spread throughout the patio. 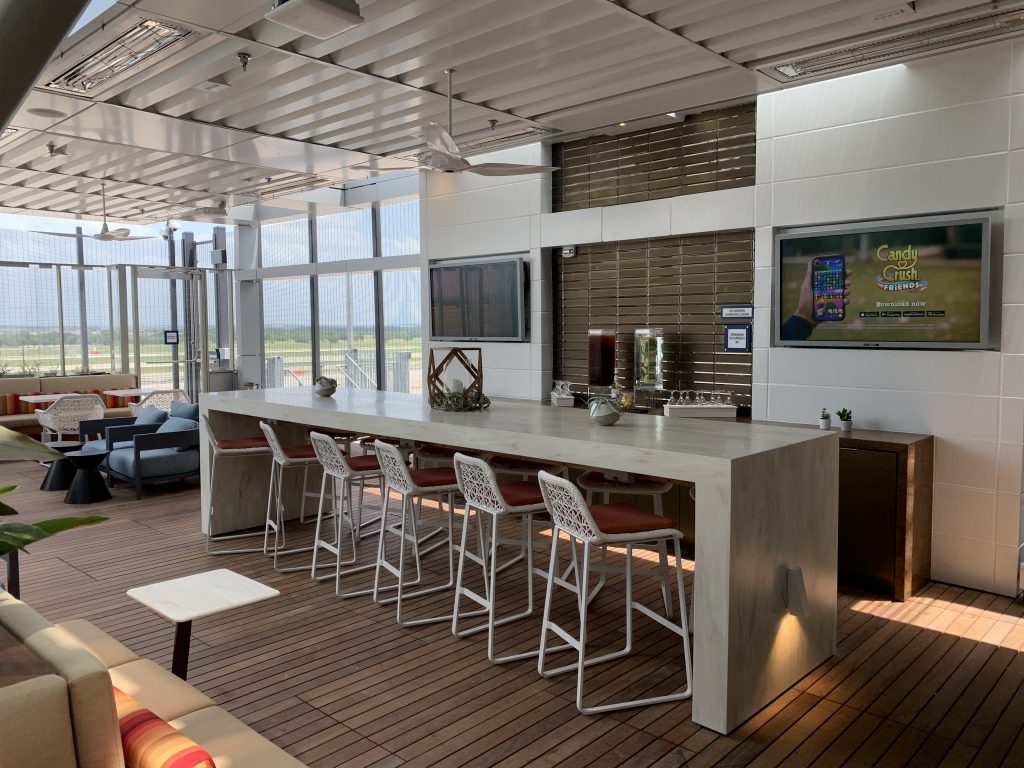 There is a self-service drink station and room for over 45 people in the Sky Deck. There are also plenty of power outlets outdoors for passengers hoping to charge-up before their flights. 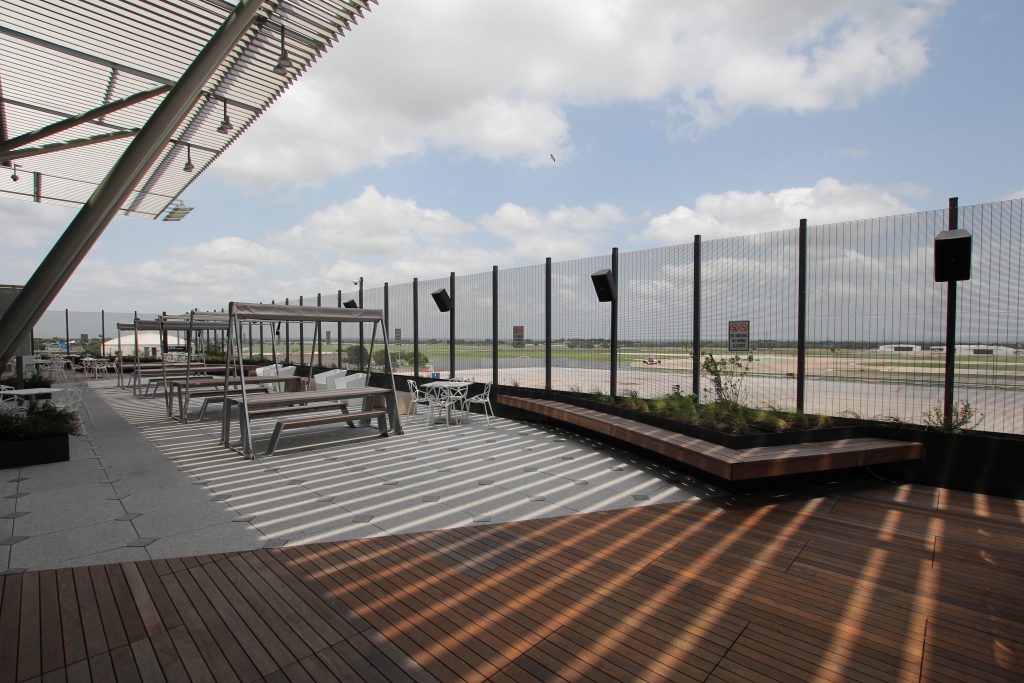 The airport’s terrace is connected to the Sky Club and will be open to all passengers flying from Austin. (Photo: AirlineGeeks | Mateen Kontoravdis)

While the patio is connected to the larger airport terrace made for all passengers, a glass wall separates the two. 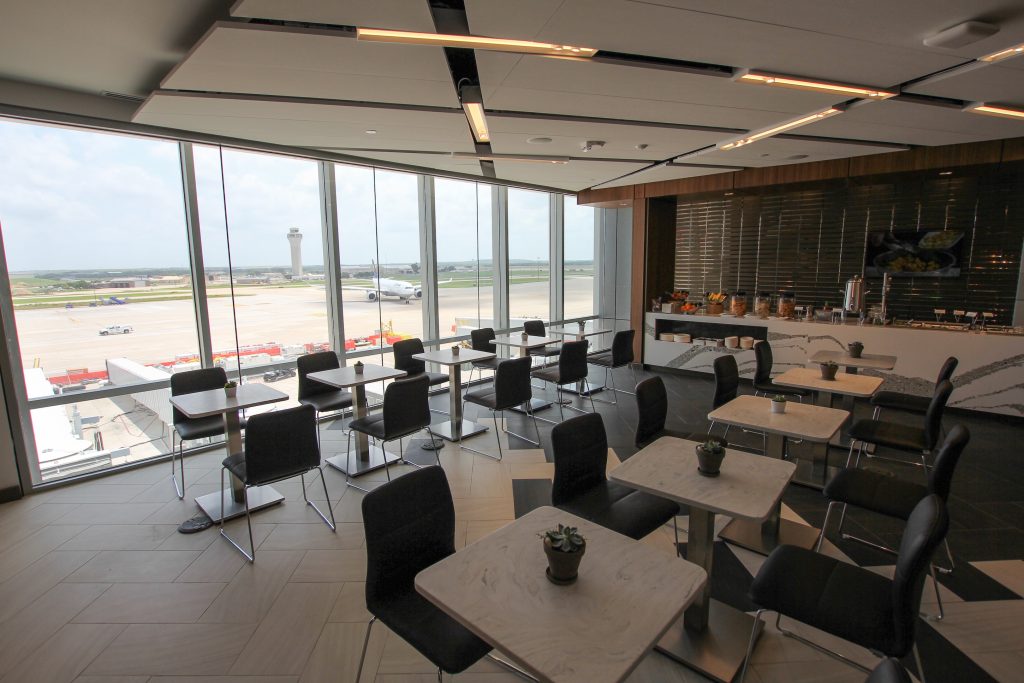 The main dining area of the lounge offers near-unobstructed views of the nearby taxiway and ramp operations. (Photo: AirlineGeeks | Mateen Kontoravdis)

Back inside, the dining area has seating space for over 30 passengers. This space also offers views of the taxiway connecting both runways with the ramp, perfect for aviation enthusiasts hoping to grab a few pictures of passing aircraft. 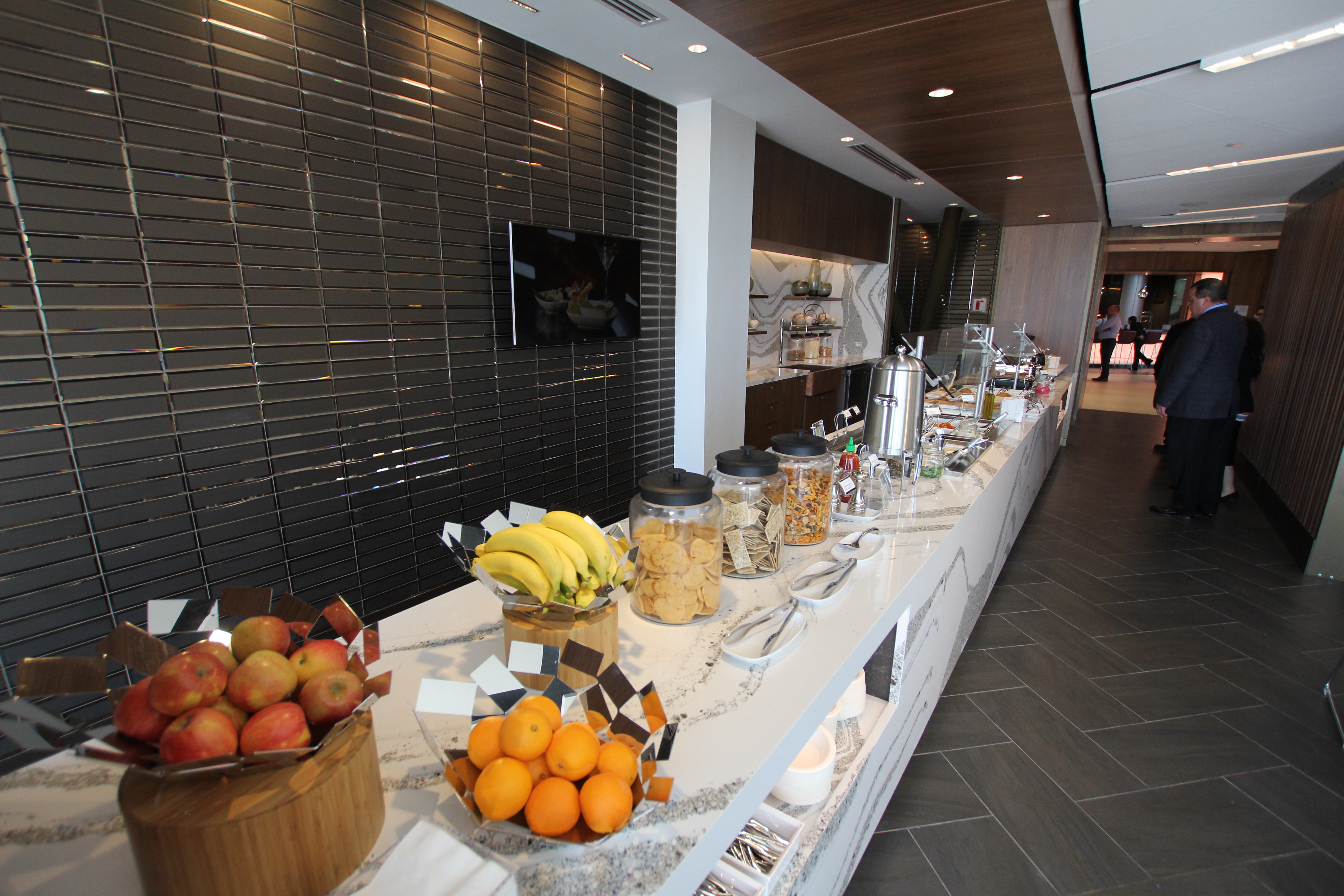 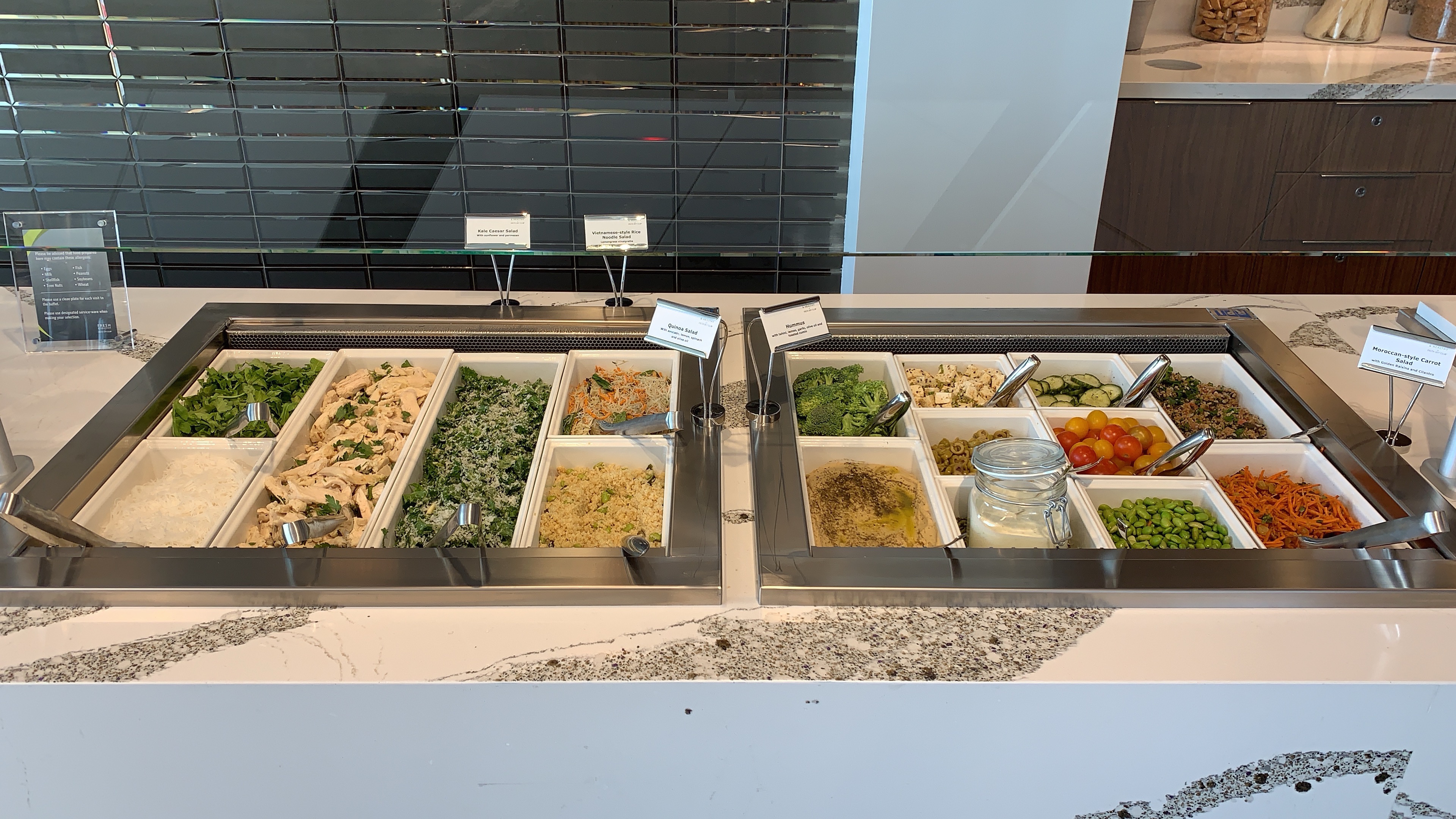 The food offerings in the lounge balance healthy and gluten-free options with sweet treats such as fresh cookies and rice crispy treats as well as hot options like wicked Thai chicken coconut. There’s even tacos and barbeques because, well, it’s Austin. 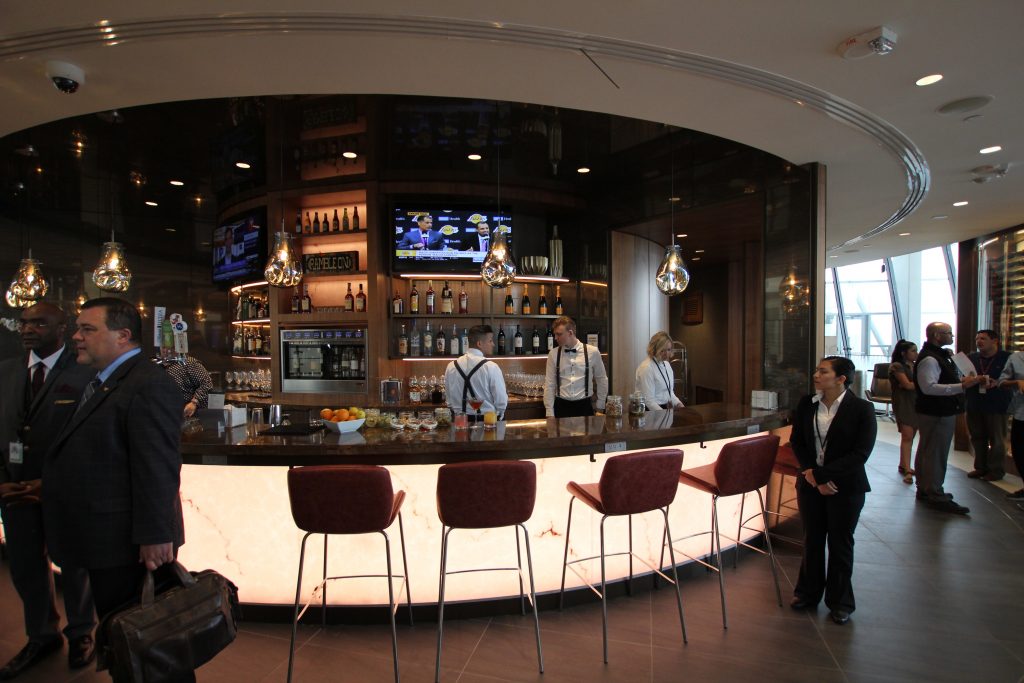 The center bar offers seating for over 10 people at a time. (Photo: AirlineGeeks | Mateen Kontoravdis)

The center of the Sky Club is where the bar is located as well as plenty of additional seating options. Special to the Austin Club, Delta has created the Agave Experience which is a tequila and mezcal tasting – this is a part of the premium menu only offered in Austin and Phoenix. 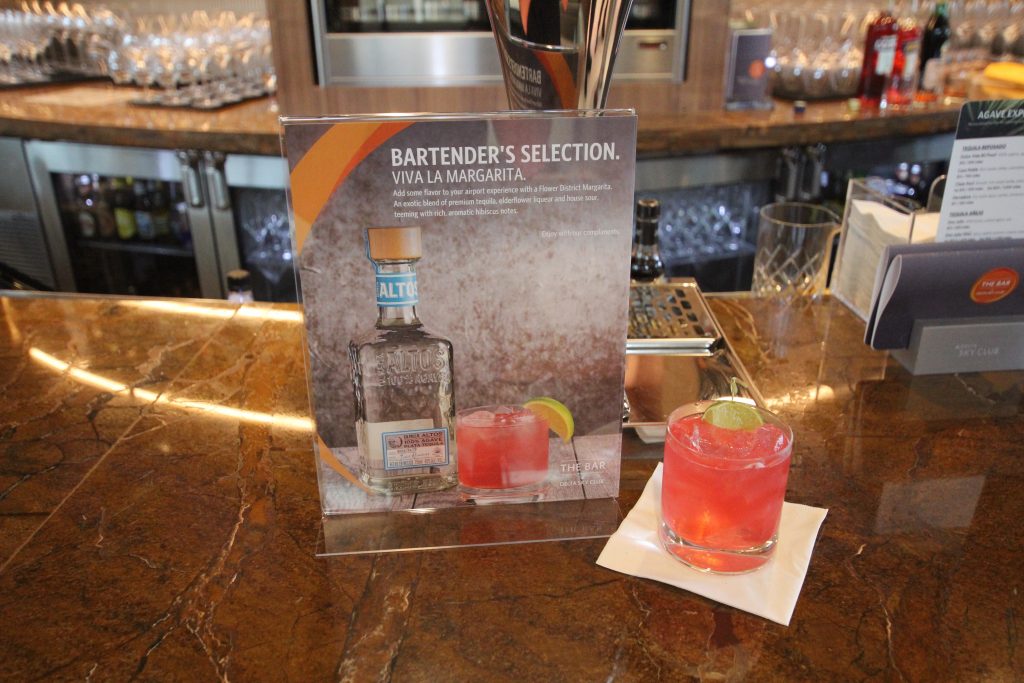 Each month, the Agave Experience will offer one complimentary drink. This month, Delta has chosen a pink Flower District Margarita. 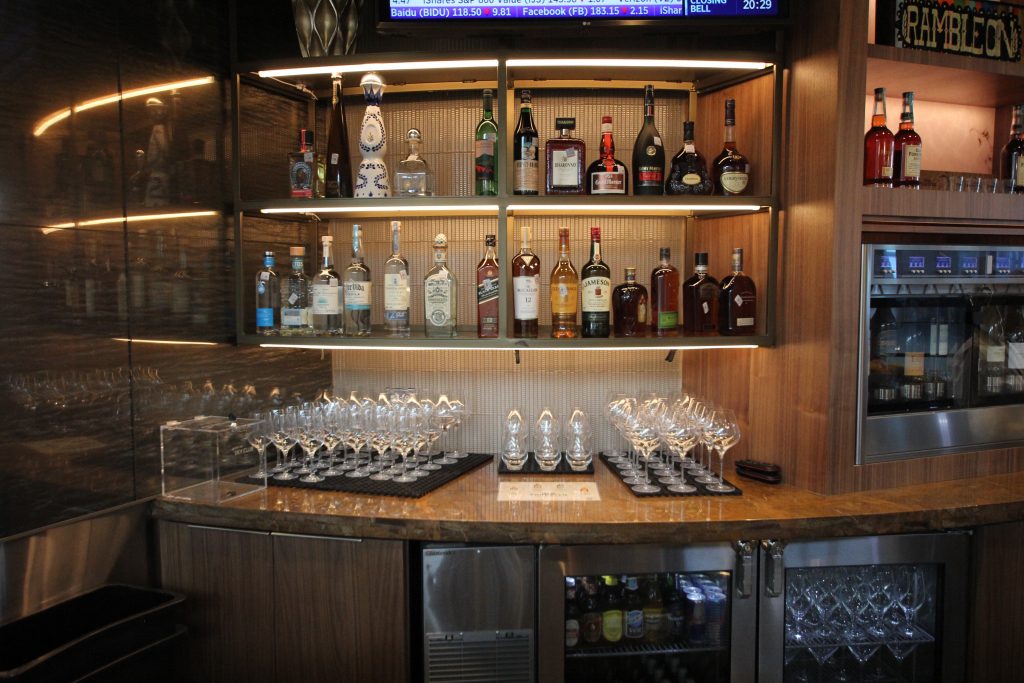 In addition to the Agave Experience, there is a full-service bar that includes seasonal cocktails and wine, selected by Delta’s Master Sommelier Andrea Robinson. There are over 15 complimentary alcoholic beverages available for Delta Sky Club members in addition to an extensive list of beverages that can be purchased. 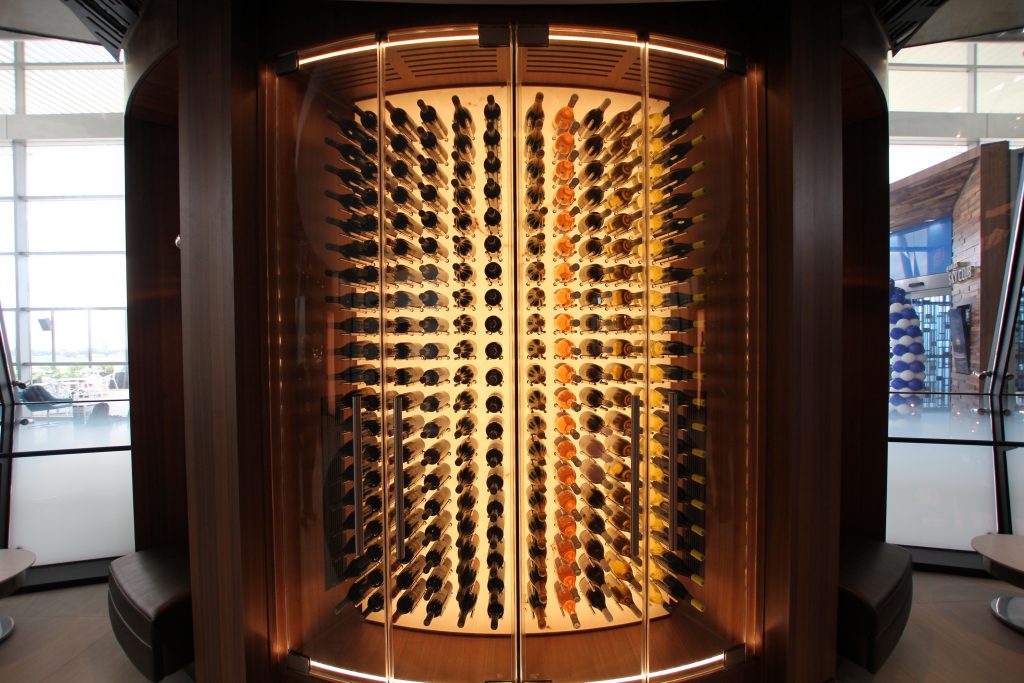 All of the wine will be stored in an impressive temperature-controlled custom glass tower. 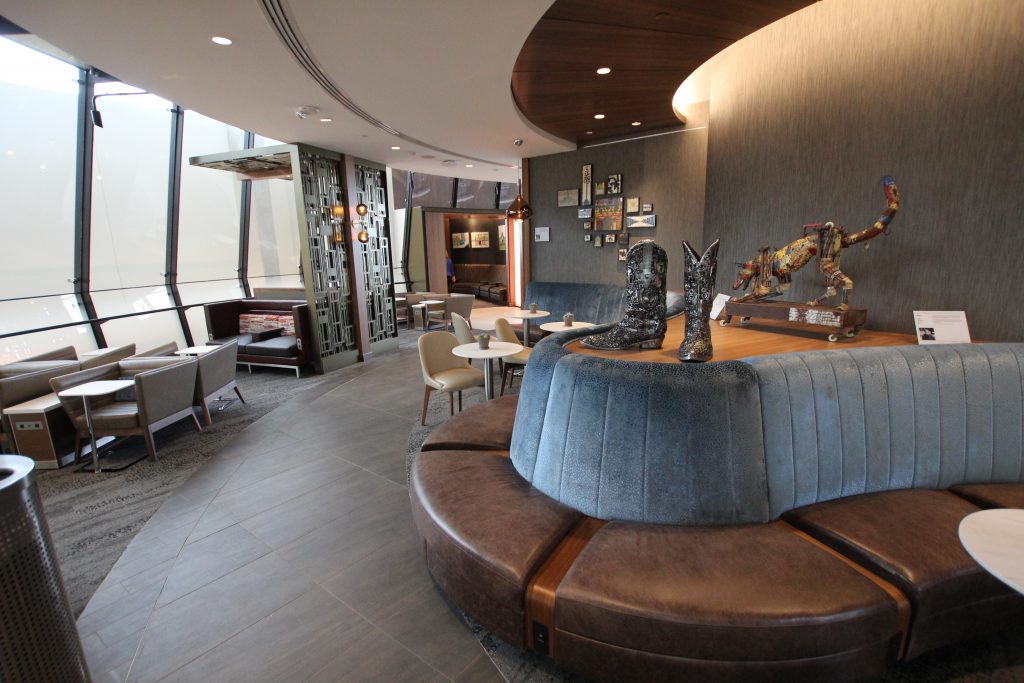 There’s no lack of unique and comfortable seating options throughout the club. (Photo: AirlineGeeks | Mateen Kontoravdis)

Walking around the circular section of the lounge, there is plenty of seating options for passengers and ample power outlets available throughout the various seating areas. 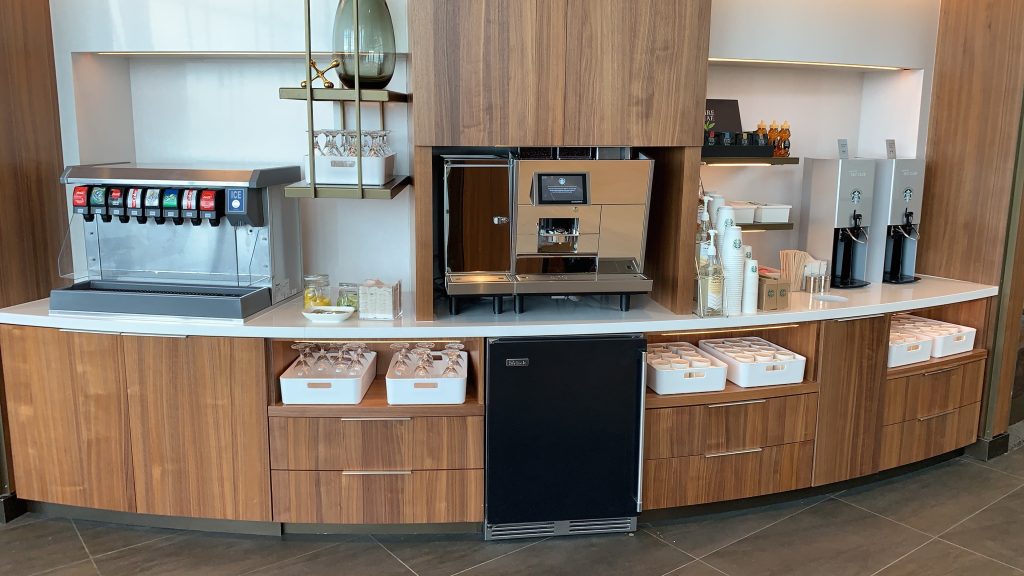 There is also a Starbucks machine and Coca Cola fountain machine on the opposite side of the bar. 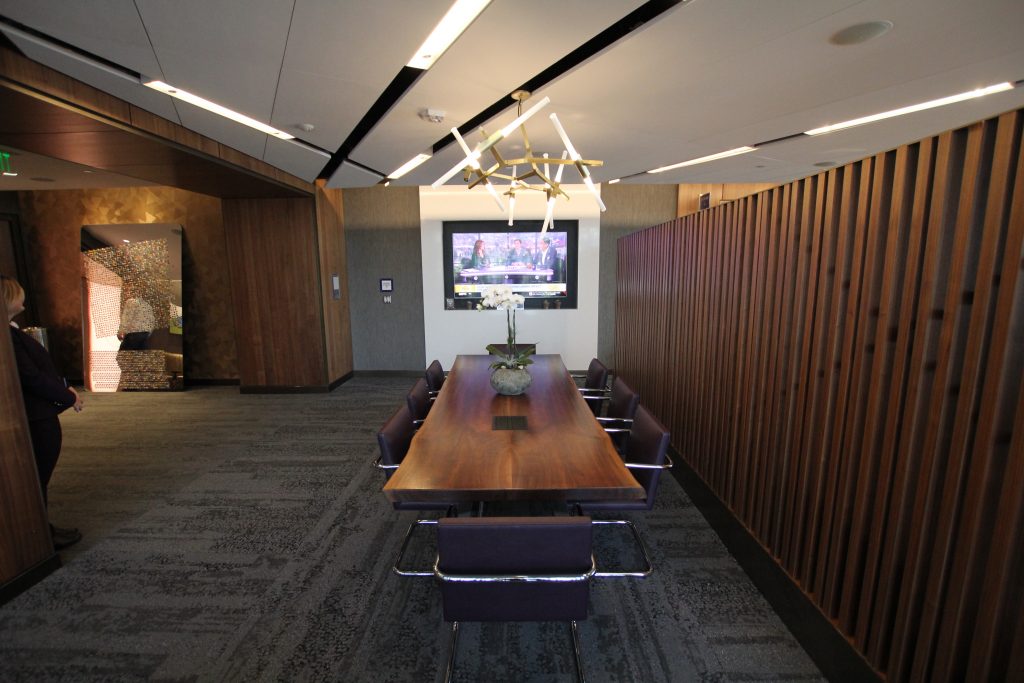 The club’s conference table with seating for up to eight people. (Photo: AirlineGeeks | Mateen Kontoravdis)

The third section of the lounge is the designated quiet area. The space has an open conference table with room to seat eight people. 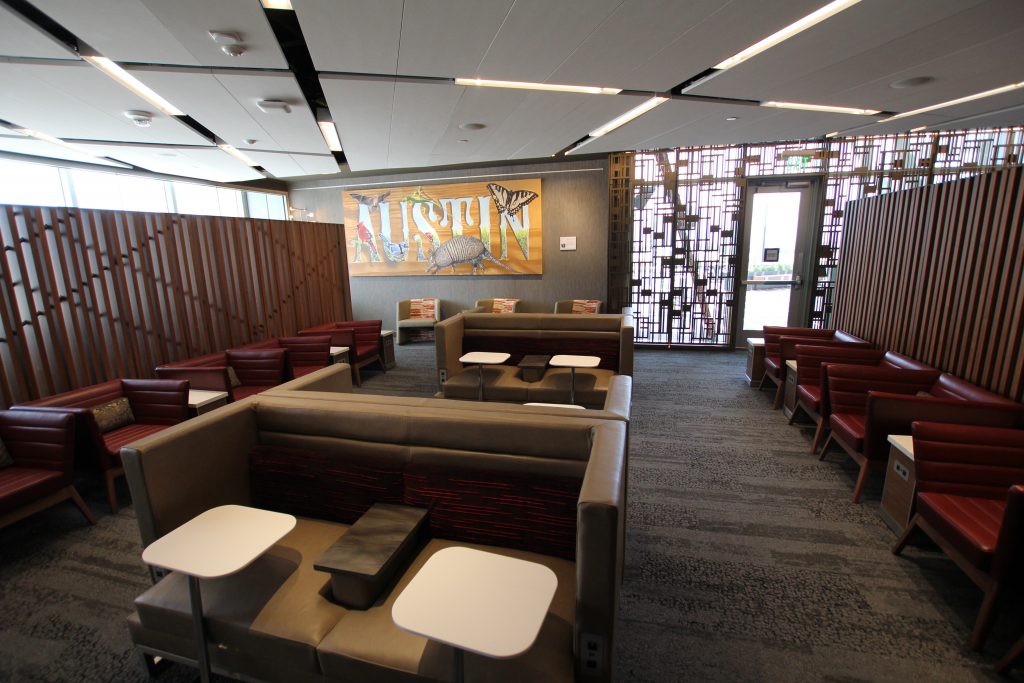 A section of the seating area inside the lounge’s quiet area. (Photo: AirlineGeeks | Mateen Kontoravdis)

Behind the conference table there are additional seating options and in the very back of the lounge eight individual work stations. The work station area offers picture-perfect views of the Delta gates and several shared-use gates. 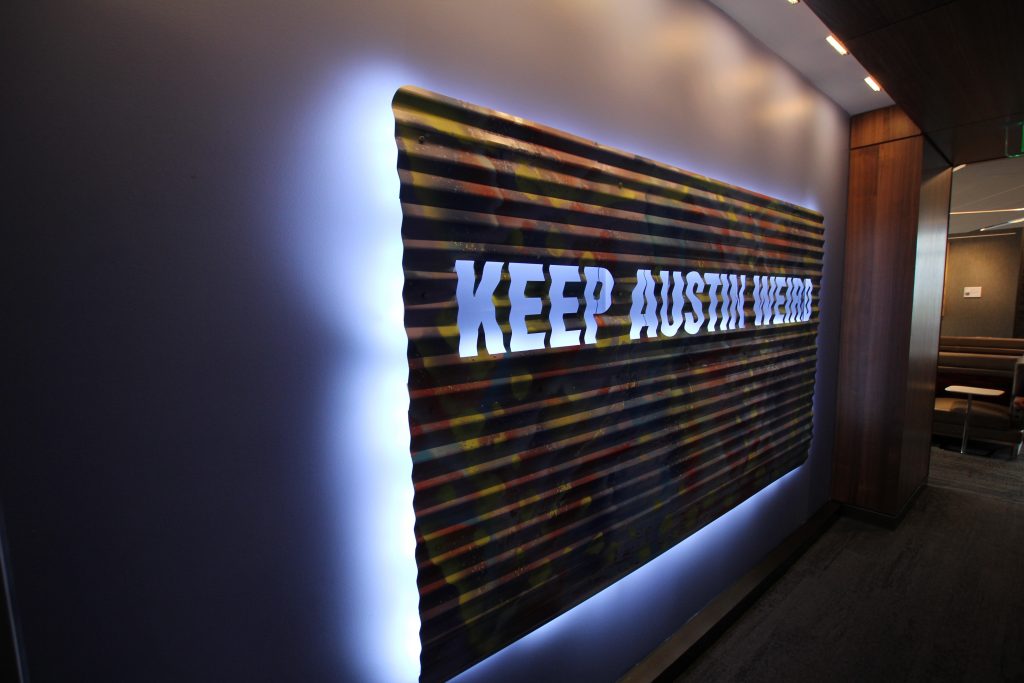 Even the Delta Sky Club is doing its part to Keep Austin Weird by embracing the local culture within the amenities the club offers. (Photo: AirlineGeeks | Mateen Kontoravdis)

This Sky Club does not have showers, but there are restrooms located in the back of the lounge. A piece of art with the famous slogan “Keep Austin Weird” lights up the hallway between the lounge and the restrooms.

Throughout the entire space, it was evident that Delta designed this club with Austin in mind. The airline elected to use warm walnut surfaces, metal finishes and rich fabrics to create a local feeling.

“When we open in a city, we want to celebrate the city from the arts on the wall to the cocktails that we have on the menu to the food. We tend to attach ourself to the city and we feel Austin is a super cool city so this is the right approach,” said Claude Roussel, Managing Director — Delta Sky Club.

Over 30 pieces of art were sourced by Susan Gibbs, the lead art curator for Delta Sky Clubs. All art pieces in the lounge were created by Texan artists or artists who were educated in Texas.

From a woven silkscreen Texas Flag to a painting of Austin’s most famous animals, the art is indicative of Austin and embraces the local setting. There’s even a piece of art titled “Mirror Fields” by Constant Dullart, depicting sim cards stuck to a mirror. This piece was chosen to represent Austin’s presence and importance in the tech industry. 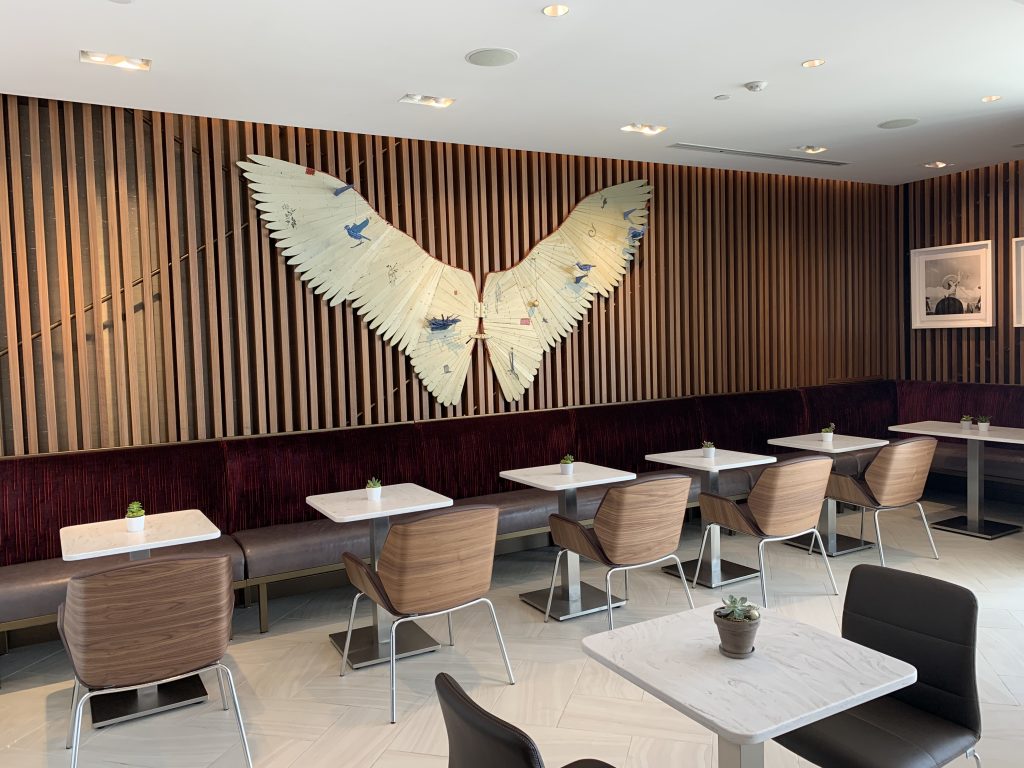 One of the 30 plus pieces of art featured throughout the club. (Photo: AirlineGeeks | Mateen Kontoravdis)

With seating for up to 140 guests, Roussel expects the club to always feel comfortable and expects passengers to have plenty of room. The lounge will be open from 5 a.m. to 6:45 p.m. daily.

“Austin has been on the radar for a while. We are excited to open tomorrow,” Roussel said.

After coining Austin as a focus city in 2018, Delta insourced its below-wing Airport Customer Service (ACS) operations in both the Texas capital and Raleigh-Durham. The opening of the new Sky Club shows the airline’s continued commitment to serving this city.

“We have 28 daily departures out of Austin. All of our flights have first class seating. We serve all of our major hubs throughout the system,” said Helda Durham, Delta Southwest Region Field Director – ACS.

Durham continued to state: “As we continue to invest in Austin, the Sky Club is further delivering on the promise of the journey for the customer and really making it an exceptional overall experience.”

Since closing its Dallas hub in the early 2000s, Delta has lacked a strong presence in Texas, a state dominated by United, American and Southwest. Many believe Austin is Delta’s chance at strengthening its Texas presence and the Airbus A220 may be the right aircraft to do this. 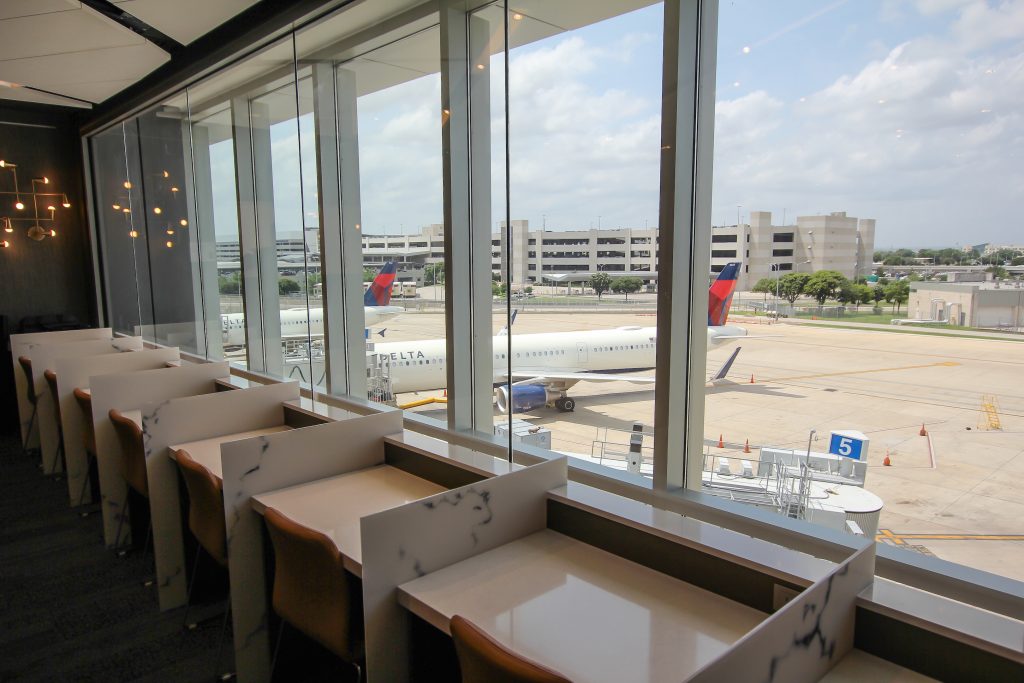 Views of Delta’s Austin operations from the lounge’s work stations in the quiet section of the Sky Club. (Photo: AirlineGeeks | Mateen Kontoravdis)

“The routing for the aircraft is still in question regarding Austin, but we definitely have something in the works,” said Durham.

While the airline didn’t give any specific details about future route expansions including the potential to turn its 2018 SXSW Amsterdam shuttle to a year-round service, passengers can expect to see the A220 on the Austin to Los Angeles route beginning on Dec. 21, 2019.

The airline currently leases three gates at Austin’s primary commercial airport. Once the remaining four gates of the nine-gate expansion open, Delta will begin leasing a fourth gate as well. Austin’s six shared-use gates also offer legacy airlines increased flexibility which allows them to use these gates when an airline in the shared use program is not utilizing the gate.

We’ll have to wait to see Delta’s next move in Austin, but as of today, the new Sky Club aims to offer the best domestic club experience in Austin. With United, American and Delta operating lounges in Austin now, there’s still a lack of priority pass options.

This may soon change though as the airport published a Common Use Lounge Concessions Request for Proposal form on its website on March 25, 2019. As airport staff relocate to a new aviation department office building near the new garage complex later this year, there will be more space for future lounges and concessions.