The Black Swan at the unveiling event in Sofia. (Photo: DRONAMICS)

DRONAMICS, founded in 2014 by the Rangelov brothers — Svilen, an economist, and Konstantin, an aerospace engineer —  is an operator of small, low-cost, medium-range cargo drones. The company, which is based in Bulgaria in Sofia, Bulgaria and operates another hub London, says its main goal is to democratize air freight and accelerate e-commerce in emerging markets.

Over the years, DRONAMICS has developed a leading cargo UAV called “The Black Swan,” a fixed-wing unmanned aircraft that can carry 350 kilograms at a distance of 2,500 kilometers, with the distinction of doing so at a fraction of the cost of traditional air cargo and much less polluting.

Among DRONAMICS’ achievements in recent years, in 2018 it became IATA’s first strategic drone partner worldwide, and the award in the category for “Sustainable Drone Technology Company of the Year 2022″ in the Freightweek Sustainability Awards (FSA). The company has also set the goal to become Carbon-neutral by 2023 and Carbon-negative by 2027. 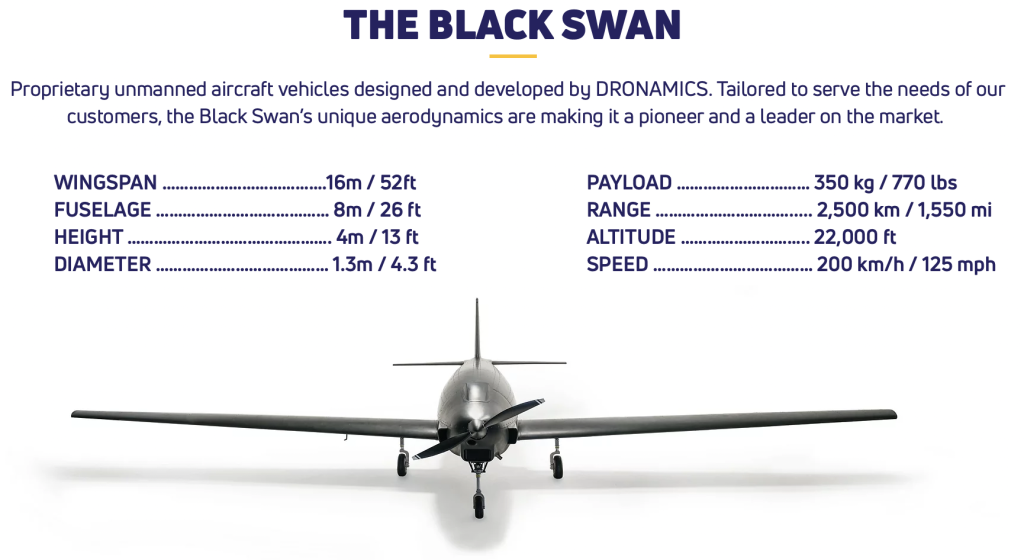 DRONAMICS, however, is not just building its drones but is also organizing the world’s first cargo drone network through partnerships with airports and establishing a European network of droneports. Specifically, five airports in Europe — located in Belgium (Liege Airport), Croatia (Osijek Airport), Finland (Seinäjoki Airport), Italy (Brescia Airport) and Sweden (Skövde Airport) — have signed agreements with the Bulgarian company.

DRONAMICS has also signed agreements with private airports and airport groups operating in more than 35 airports in 11 European countries and will aim to connect 300 million people with a low-cost same-day cargo service in the world of pharmaceuticals, e-commerce, and urgent shipments.

The Rangelov brothers’ company was of considerable interest during the Covid-19 pandemic. As a result of border closures and the stop of global supply chains, freight transport was almost at a standstill. However, with unmanned drones such as those of DRONAMICS, freight (especially urgent freight) in the European network would not suffer those kinds of problems, as well as costs and emissions up to 80% lower than traditional air cargo.

All this would have remained a dream if the Rangelov brothers’ efforts had not gone all the way. On May 25, DRONAMICS obtained the air license for drones — or Light UAS Operator Certificate (LUC) — recognized in all EU member states, granted by the Transport Malta Civil Aviation Directorate (TM – CAD), the nation’s civil aviation authority.

This one was a key step for the Bulgarian company because now, everything that has been conceived, designed and then implemented can truly come to life.

DRONAMICS made history since is the first cargo drone company to have obtained this kind of license. This license allows it to authorize its Black Swan drone flight operations in all EU countries, including operations beyond the visual line of sight.