The tragic flooding in the Houston area during Hurricane Harvey is wreaking havoc on the local community. For one airline, sending support to its second largest hub extended much farther than travel waivers or meal vouches, but humanitarian aid in the form of three wide-body flights.

With 484 combined daily regional and mainline flights, United’s hub at Houston Intercontinental is expansive, and it’s no secret that Harvey will paralyze the operation for weeks, if not months.

On Sunday, the airport closed to all commercial traffic with the exception of relief and military flights. United used the “relief” flights exception to its advantage, operating a route from Chicago-O’Hare to Houston on Sunday afternoon.

The flight, which departed Chicago at 3:44 p.m., would soon turn around in Houston after arriving at 5:49 p.m. local time.

The @united 777-300ER with relief supplies and personnel onboard turning into the gate at @iah. pic.twitter.com/lVhwwyD48T

This flight wasn’t operated by just any airplane either; it happened to be N2331U (ship 2131), United’s first 777-300ER, affectionately titled the ‘New Spirit of United.’ This particular aircraft joins a fleet of 14 other 777-300ERs and are known by many as United’s latest and greatest jet, featuring a redesigned cabin and enhanced passenger experience.

Sunday’s flight came as a surprise to many as the airport and the surrounding region were being pummeled by heavy rain and flooding. Somehow, though, United’s teams came together to safely put ship 2131 on the ground and on a gate in terminal C soon after.

Support and supplies on their way to @IAH. Join our United family in helping with #Harvey relief efforts: https://t.co/Xbny8j7uNT pic.twitter.com/Ah1ghcEumB

A slightly blurred out 777 could be seen on the airport’s EarthCam as it created water-infused jet blast while pulling into the alleyway. This left many to wonder what was onboard.

“That is a flight that has additional employees, resources and supplies for folks in Houston,” United spokesperson Charles Hobart told AirlineGeeks.com in an email message, noting the trip as a relief flight. 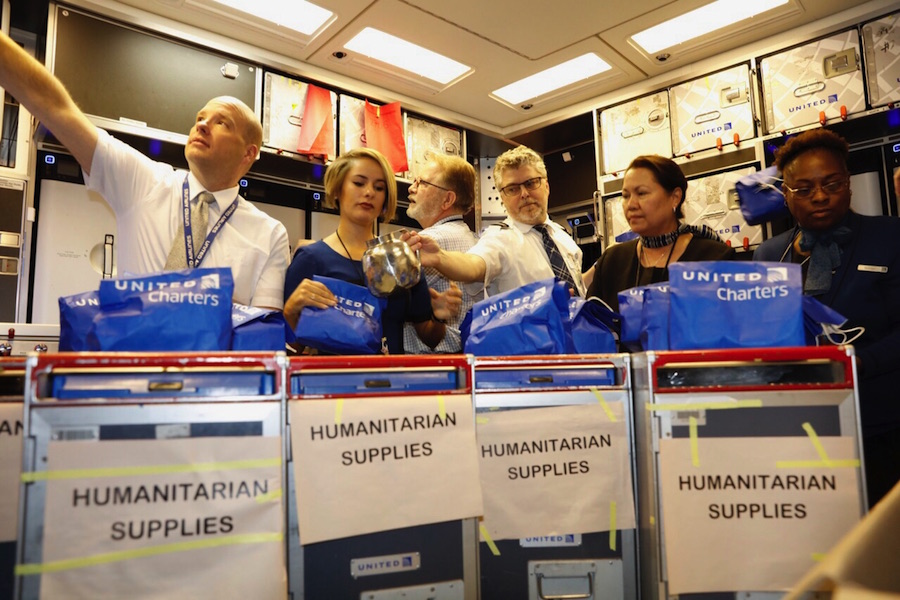 ‘New Spirit of United’ was filled with supplies to support the Houston team who had been working tirelessly to keep the facility in check while some were even unaware of their own homes’ condition. The flight would then turn back to Chicago with 315 passengers onboard, according to a source familiar with the operation.

And the airline’s disaster relief efforts didn’t stop there. On Monday morning, United loaded ‘New Spirit of United’ up with supplies yet again, ferrying it to Houston-IAH as UA2748 departing Chicago-O’Hare at 11:24 a.m. local time.

Thinking about you Team IAH. We will do all we can to support you and your families. Please be careful and Safe. @weareunited pic.twitter.com/ryZSsxSERt

Instead of luggage and shipping containers, N2331U’s holds were stocked with bottled water, food, and bedding to help the Harvey victims in Houston.

“United’s commitment has always been above profit margins. At the end of the day, there are real people making a difference. These flights reflect each our own core values but most importantly it shows us working together to fly above and beyond, to bring much needed relief to not only our stranded passengers and crew, but to everyone affected by this horrible storm,” said a Washington Dulles-based flight attendant. 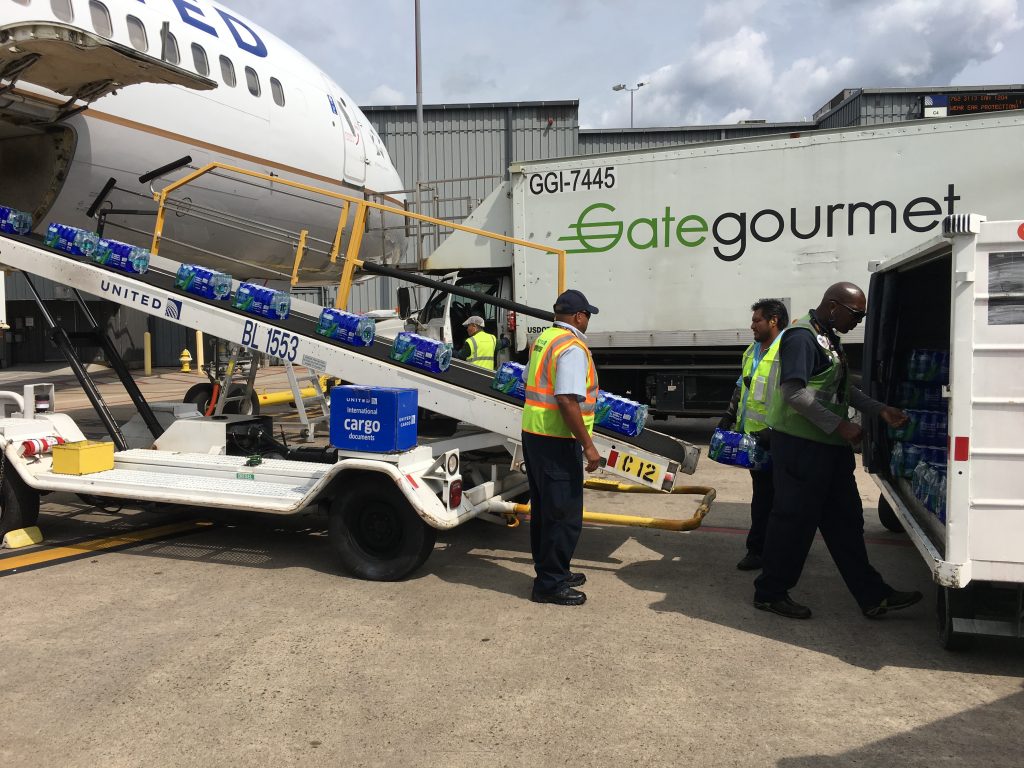 By late Monday night, United had operated three relief flights between Chicago-O’Hare and Houston Intercontinental. The last flight on Monday was operated by a 767-300, which also ferried more resources to the region.

These two flights on Monday also brought the remaining passengers who had been stranded back to Chicago.

The last remaining United pax awaiting flight out of IAH (Bush-Intercontinental) appear to have left airport on UAL2748, a B77W. #harvey

While other carriers, including American, Delta, Southwest and Spirit, have ferried in relief flights to evacuate passengers or support local staff, United wanted to also help the local community. The airline employs 14,941 employees in the region, making it the eighth largest employer in the Houston area.

In addition, United’s CEO Oscar Munoz will match employee donations for every dollar up to $1 million. Munoz has also been spotted greeting employees, while toggling the operational nightmare that is unfolding at the company’s Emergency Operations Center (EOC) in Chicago.

“It is heartwarming to know that our CEO has pledged to match our donations dollar for dollar, up to $1Mil. He has personally greeted flights to reassure our team. This is truly the new spirit of United,” the flight attendant added.

Airline Geeks, LLC invites you to donate to the American Red Cross by purchasing one of our original gray t-shirts. Half of the proceeds will be donated on purchases before August 31st.

Follow Ryan
Ryan Ewing
Ryan founded AirlineGeeks.com back in February 2013 and has amassed considerable experience in the aviation sector. His work has been featured in several publications and news outlets, including CNN, WJLA, CNET, and Business Insider. During his time in the industry, he's worked in roles pertaining to airport operations and customer service while pursuing a bachelor's degree in Air Transportation Management from Arizona State University. Ryan has experience in several facets of the industry from behind the yoke of a Cessna 172 to interviewing airline industry executives.
Follow Ryan
Latest posts by Ryan Ewing (see all)
777airline staffairlinesFeaturedharveyHoustonHouston floodshurricane harveyIAHORDpeople of the airline industrystormteamUnitedUnited Airlines
Related Stories
[ Related Stories ]November 27, 2021 4:39 pm ET
By Joey Gerardi

After a coronavirus-induced suspension, India will restart scheduled foreign flights on December 15, the Aviation Ministry said on Friday. In…

The S&P Global Corporate Sustainability Assessment (CSA) is an annual evaluation of companies’ sustainability practices, covering over 10,000 companies from…