Boeing has confirmed that its first 787-10 model, which will be flown by Singapore Airlines, has rolled off the production line at its Final Assembly Facility in North Charleston, South Carolina. Due for delivery in the first half of 2018, the aircraft will now move on to be painted and begin system checks, fueling, and engine runs. 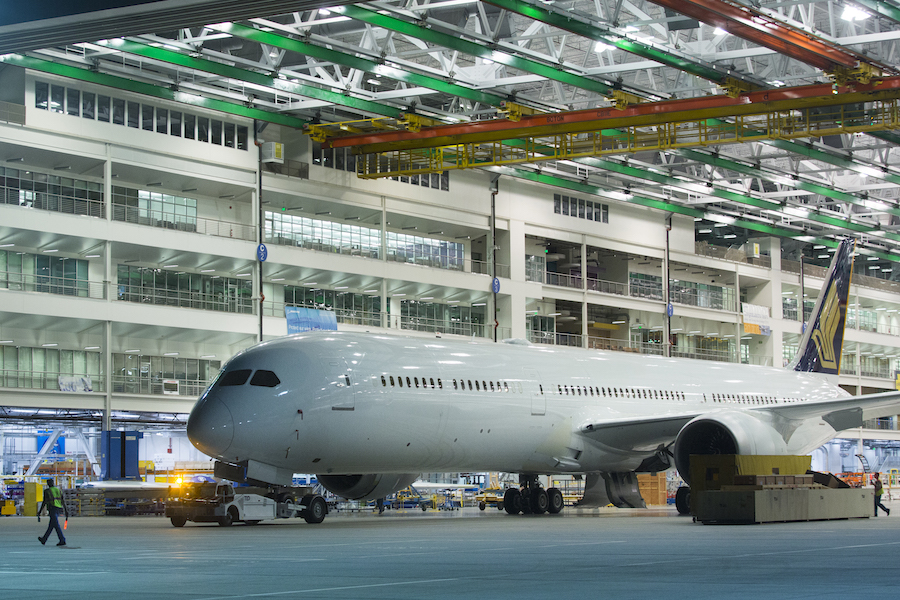 Singapore’s first 787-10 is towed out of the factory (Photo: Boeing)

In a press release, Boeing Senior Vice-President of Asia-Pacific and India Sales, Dinesh Keskar, said “Boeing is excited to have finished final assembly of the first 787-10 Dreamliner for Singapore Airlines. With its unprecedented efficiency, greater capacity, and the Dreamliner’s known preferred passenger experience, the 787-10 will be an important part of the airline’s future fleet.”

The 787-10 is a 5.2m (18-foot) stretch of the 787-9, and according to Boeing will provide a 25 percent improvement in fuel economy per seat, and is designed to accommodate 330 passengers. There are currently 177 on order for a number of airlines, including United, EVA Air, Etihad, British Airways, and Air France-KLM.

Andy flew regularly from a young age on family holidays, but his interest in aviation really began when he saw Concorde flying over his grandparents' house on final approach. A Power Engineer by profession, his hobbies include writing, playing guitar, and taking a beating at squash.

Andy flew regularly from a young age on family holidays, but his interest in aviation really began when he saw Concorde flying over his grandparents' house on final approach. A Power Engineer by profession, his hobbies include writing, playing guitar, and taking a beating at squash.

Earlier this month, the Civil Aviation Administration of China said it would promote and allow measures that allow airlines to continue to stay afloat as the country's aviation industry is plagued by the lack of travel resulting from the novel coronavirus that has filled up headlines. The Chinese aviation regulator…

Last September, LATAM made headlines as it announced an almost two-billion-dollar cash injection from Delta which would see joint collaboration…

The aviation world has been sharply divided yet again. It’s not unusual for this to happen in the community, we…