Formerly defunct World Airways is potentially being given a second chance at life, for now. On Wednesday,  777 Partners announced that they had acquired the intellectual property for World Airways and planned to restart the carrier. However, instead of picking up where the airline left off, the business strategy for the airline will shift from a cargo and charter carrier to an ultra-low-cost commercial carrier.

Miami-based 777 Partners revealed that their intended strategy for World would be to turn the carrier into a primarily long-haul ULCC, operating flights between the United States, South America, and Asia. The company is currently in talks with Boeing to order up to ten Boeing 787-8 Dreamliners to operate out of their planned hubs in Miami and Los Angeles.

The 787 is a favorite among ULCCs due to their fuel efficiency and low operating costs per passenger. Other low-cost carriers use the new plane on routes that have less demand but are still viable. Norwegian Long Haul operates their 787 fleet from Europe to North America with a ULCC business model. Legacy carriers such as British Airways also use their fleet of 787s to service low demand cities that are made profitable with the 787. 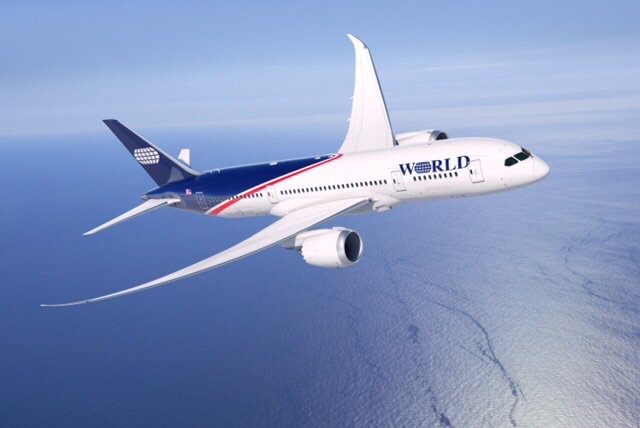 A mock-up version of the airline’s 787 livery (Photo: World Airways on Twitter)

Josh Wander, managing partner and founder of 777 Partners has high expectations for the new World, saying: “777 Partners is humbled by the opportunity to participate in the relaunch of World, a seminal brand in the history of U.S. commercial aviation. We are determined to pay proper homage to World’s rich heritage by delivering a transformative flying experience rooted in safety, technology, and service, to the large segment of the traveling public historically priced out of international travel.”

World Airways has a rich history in U.S. aviation, dating back to the company’s creation in 1948. The airline became a key contractor for the United States military during the Vietnam and Gulf Wars and operated most of their aircraft on behalf of the military. However, cuts to the armed forces and the increasing price of fuel took its toll on the carrier, resulting in their bankruptcy, grounding, and cessation of operations in 2014.

Despite being mostly a cargo and charter carrier, the previous iteration of World Airways did have some commercial experience, with the airline flying McDonnell-Douglas MD-10 aircraft between 11 different cities in the United States and Europe. However, the commercial arm of World was cut in the 1980s due to high operating costs. Since then, the airline solely flew cargo and charter flights.

World wouldn’t be the first Miami-based carrier to switch from chartering aircraft to a different business strategy. Re-emerging from bankruptcy in 2004, long time charter carrier Arrow Air opted to leave the charter market to focus on cargo operations to Latin America.

The newly turned cargo airline signed deals for financial backing from the MattlinPatterson Group and Brazilian cargo carrier Varig Log, with the goal of operating a hub in Miami. Unfortunately, the airline was unsuccessful and closed all operations in 2010.

For 777 Partners, World will be their first foray into the aviation industry. The investment firm has prided itself on having a diverse investment strategy, with the firm’s current investments ranging from healthcare to settlement structuring.

The group will move forward with their plans to restart World Airways in the next few weeks. The initial goal for the firm will be to release new branding initiatives and strategies for “the United States’ first ultra-low-cost long-haul carrier.”

Ryanair’s U.K.-based cabin crew have followed the airline’s U.K-based pilots in accepting a deal to secure jobs as the aviation…

Europe’s two low-cost giants Ryanair and Wizz Air are in an open conflict over Buzz, a subsidiary of the Ryanair…