A New Inspiration of Japan: An Inside Look at ANA’s New Premium Products

Less than two weeks after it was announced, New York became the second city to receive All Nippon Airways’ newest premium products on Friday with the Japanese airline debuting “THE Room” and “THE Suite” on the Tokyo-New York route in business class and first class, respectively.

Fitted exclusively on the airline’s Boeing 777-300ER for now, the new products are focused primarily in the forward cabins but also include enhancements in premium economy and economy, an enhanced service offering and upgrades to other aspects of the aircraft.

Celebrating Friday’s launch, All Nippon Airways showed off its newest product in New York City with some help from brand ambassador Steve Aoki.

Taking on the Industry’s Best

The expansion of the new ultra-premium service to New York comes following a successful debut of the products on the Tokyo-London route earlier this summer. Already rated as one of the best business class airlines, the new product launch will see THE Room competing against Qatar Airways’ Qsuites, which took the top prize at the 2019 Skytrax Awards after beating out ANA for the top spot.

The new product, which features a revolutionary new business class and upgraded first class section, is only found on the airline’s Boeing 777-300ER product, the primary long-haul aircraft serving ANA’s most profitable international destinations including London, New York and Frankfurt. These routes have always seen an emphasis on premium cabins, with high-premium configurations dominating the widebodies on them, and are now the first to see THE Room and THE Suite in business class and first class, respectively.

While the Skytrax-rated 5-star carrier is already known for its service and existing product, the quiet unveiling of the product has already taken the industry by storm and is rivaling the top business class products currently on the market.

The centerpiece of the new product is THE Room, a first-of-its-kind product for ANA that features an enclosed business class suite. While business class suites are quickly becoming the norm in the industry, THE Room differentiates itself by providing a living room-type feel unmatched by any current products. 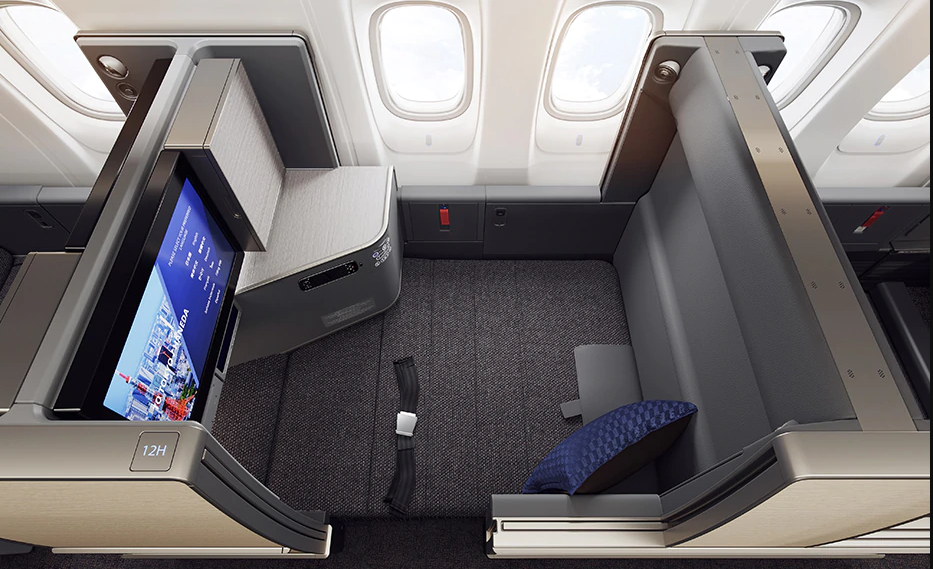 When in lie-flat mode, the seat allows for more room to stretch out. (Photo: ANA)

As opposed to a traditional seat, THE Room offers an elongated seat that makes one feel at home on the couch rather than in an airplane seat. With cushioning that extends from wall to wall within THE Room, an occupant can truly stretch out and get comfortable, especially when the lie-flat seat is transformed into a bed. 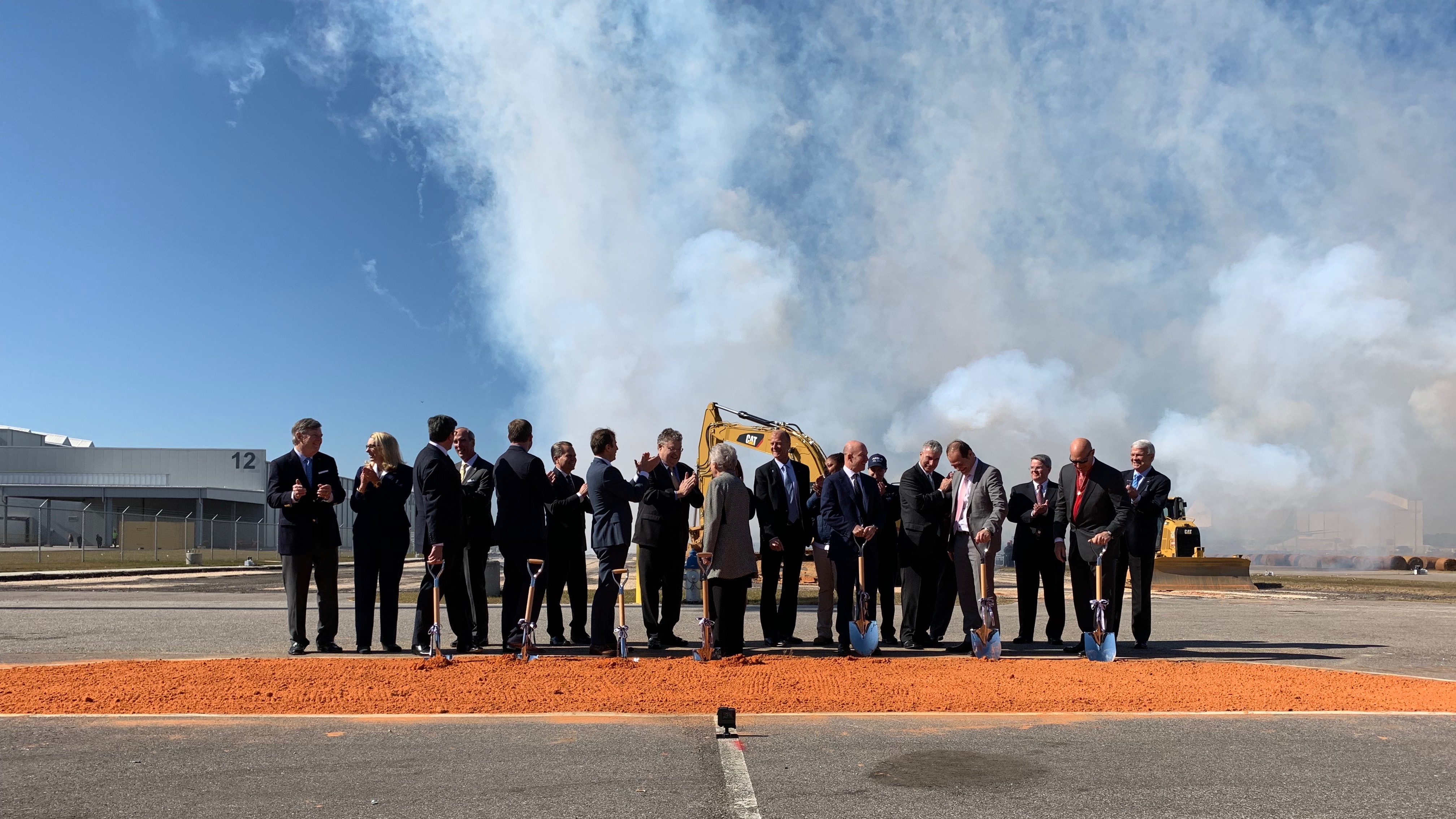 The extra cushioning found in THE Room allows for a variety of sleeping positions. (Photo: AirlineGeeks | Tom Pallini)

The highlight of the suite is the privacy it offers, which marks an evolution in ANA’s thinking when it comes to the cabin. Each suite offers a door that goes as high as the suite’s walls along with a raisable sidewall to enclose the suite even more. For center-aisle suites, each sidewall can be adjusted to suit the needs of the occupant with adjustable partitions depending if you’re traveling alone or with a companion.

Although the suite door doesn’t fully meet the adjacent sidewall, meaning it can’t be classified as fully-enclosed despite there being less than a half-inch of open space between the door and nearest side wall, THE Room offers unprecedented privacy for an ANA business class product. The airline’s current business class seat products are open and privacy varies with seat location; whereas, THE Room offers complete privacy at every seat, independent of location. 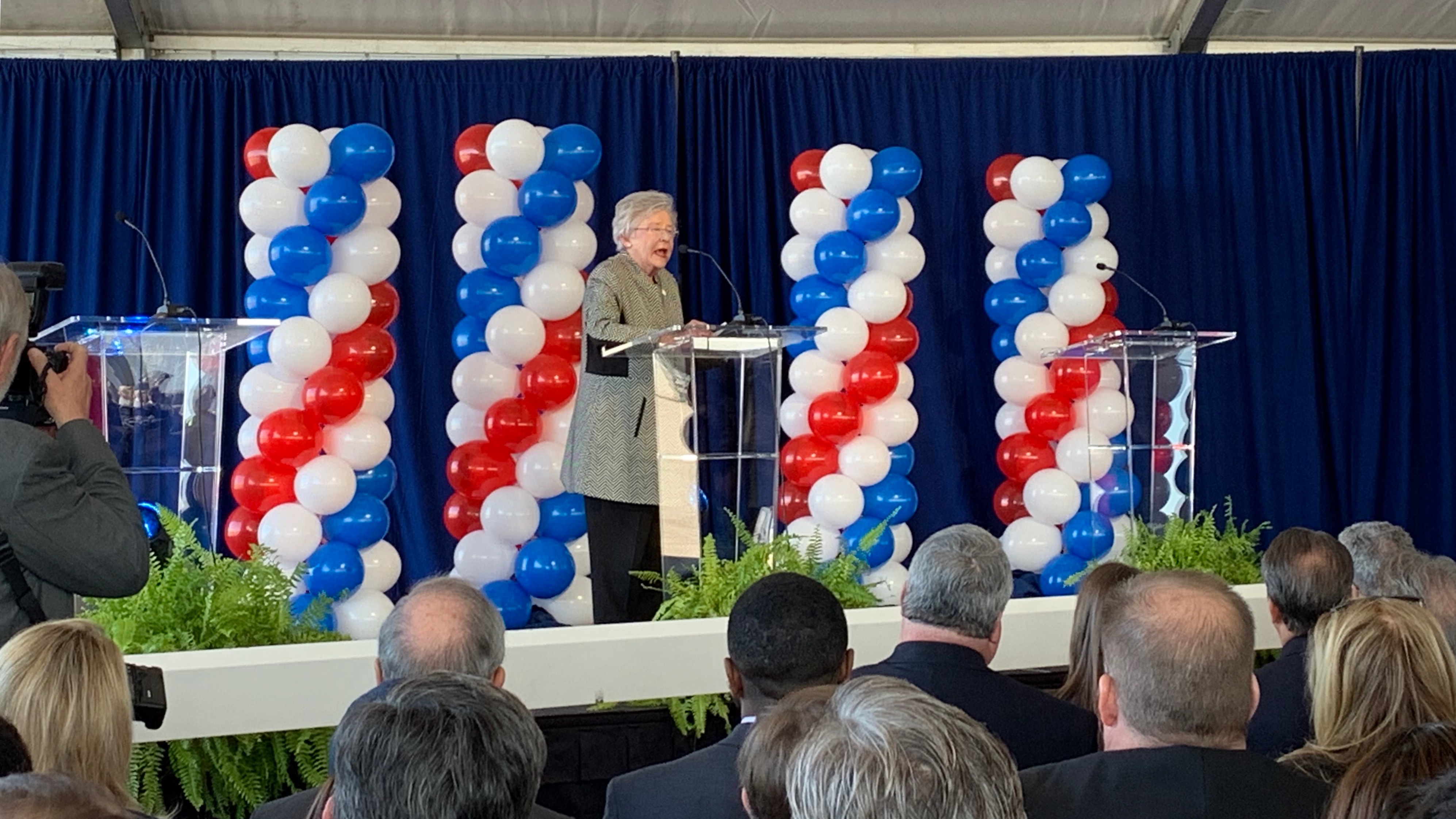 Inside THE Room, passengers can find the standard amenities with a few upgrades. The core features are present including a fully lie-flat seat, in-seat power options, a foldable tray table that extends straight back from under the in-flight entertainment screen, a closable door and ample storage space. The upgrades, however, include three separate personal lights, a tethered touchscreen remote, 24-inch 4K in-flight entertainment system, coat hanger and mirror. 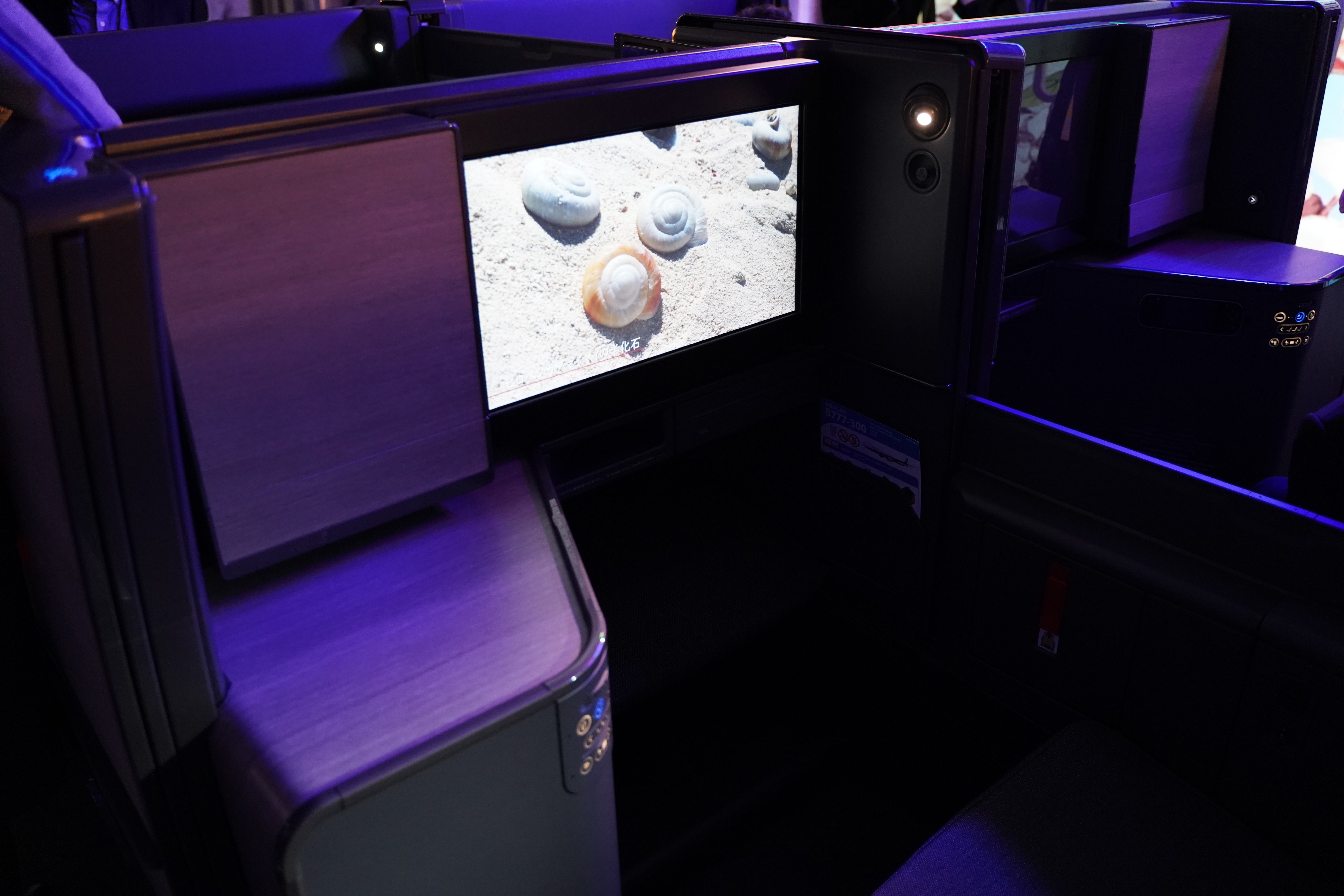 With an extremely generous 22.2-inches of width, THE Room offers a seat with nearly double the size of its predecessor product. Unlike current business class products on rivaling airlines, there is no separation between cushioned surfaces offering a singular widened seat, benefiting all different types of travelers. 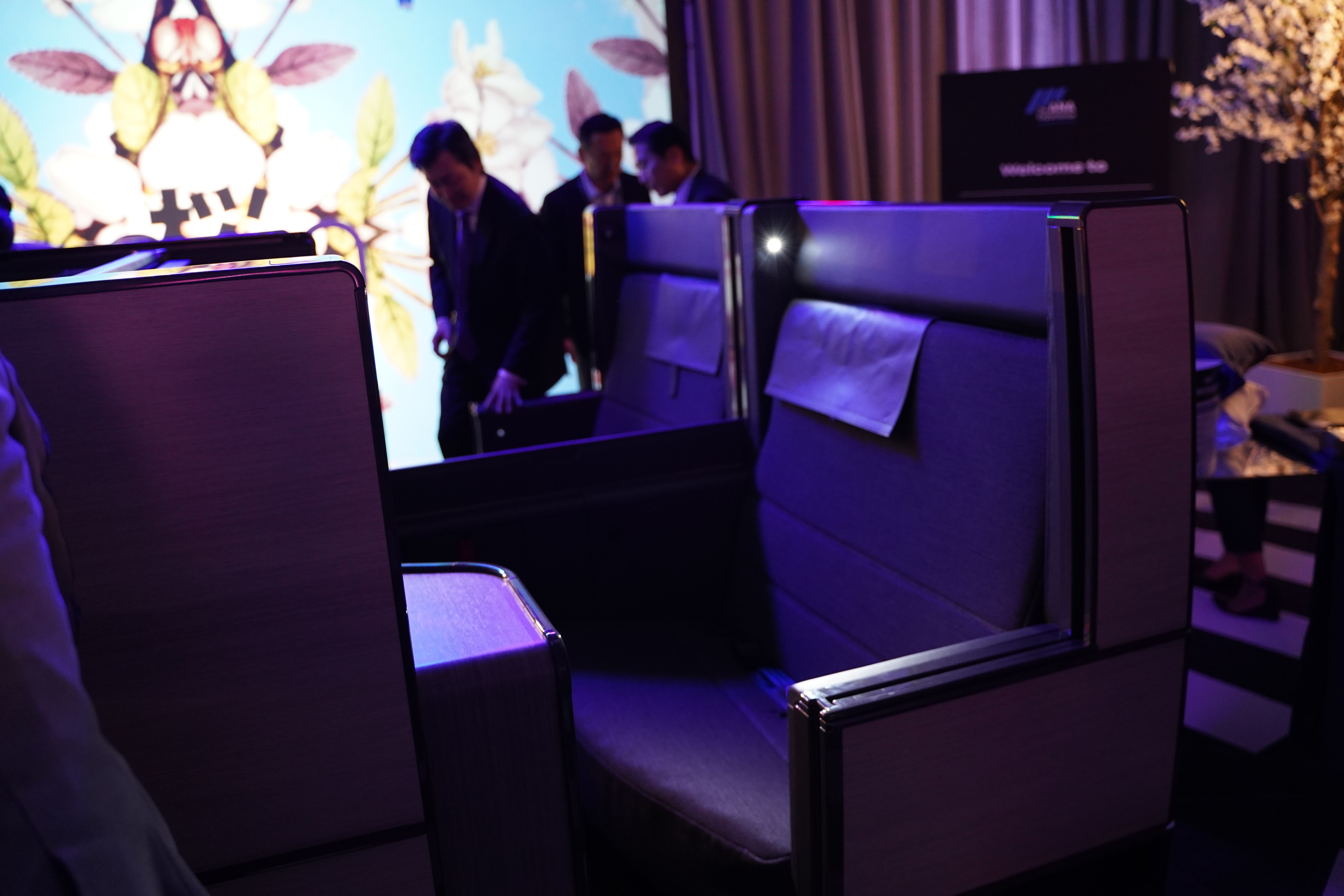 The seat pitch in THE Room is 107 inches, the largest of any ANA business class seat. (Photo: AirlineGeeks | Hemal Gosai)

For business travelers spending the 14-hour journey between New York and Tokyo working, the extra space provides a less-confined workspace to work in comfort and privacy. For those traveling for leisure, THE Room’s large in-flight entertainment screens and unobstructed window views for those along the cabin wall make the long-haul a more relaxing and enjoyable experience.

One of the most unique features is the seat control panel. While most current business class products require holding down a button to get to your desired seat angle, THE Room features a slider to fine-tune the process. While preset angles are also available at the touch of a button, the airline is the first to have its seat controlled by a slider. 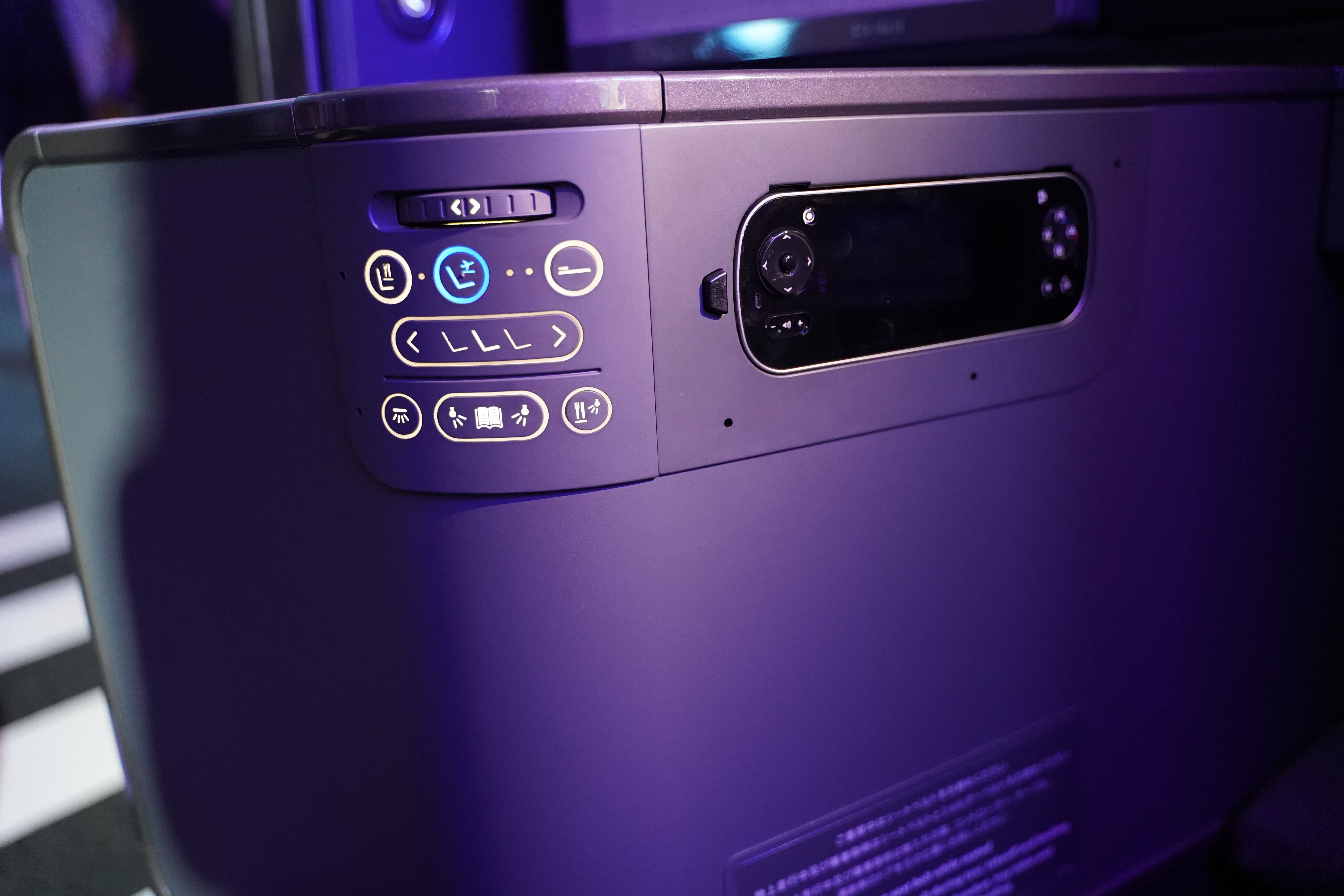 Seat controls for THE Room are found on the adjacent counter with a slider to control seat recline. (Photo: AirlineGeeks | Hemal Gosai)

The seats also offer spacious pitch, 28.1 inches of width and a bed length of 80.1 inches, with the extra cushioning allowing for more room to position one’s self during sleep. The bedding is also custom made to accommodate the extra surface area for maximum utilization and comfort.

Center-aisle suites are ideal for pairs traveling together as even two people sitting just across the aisle from one another can feel worlds away. Though center-aisle seats are arranged in groups of 4, with two pairs facing each other, the one downside is that there is no way to create a conference room style layout found with Qsuites. 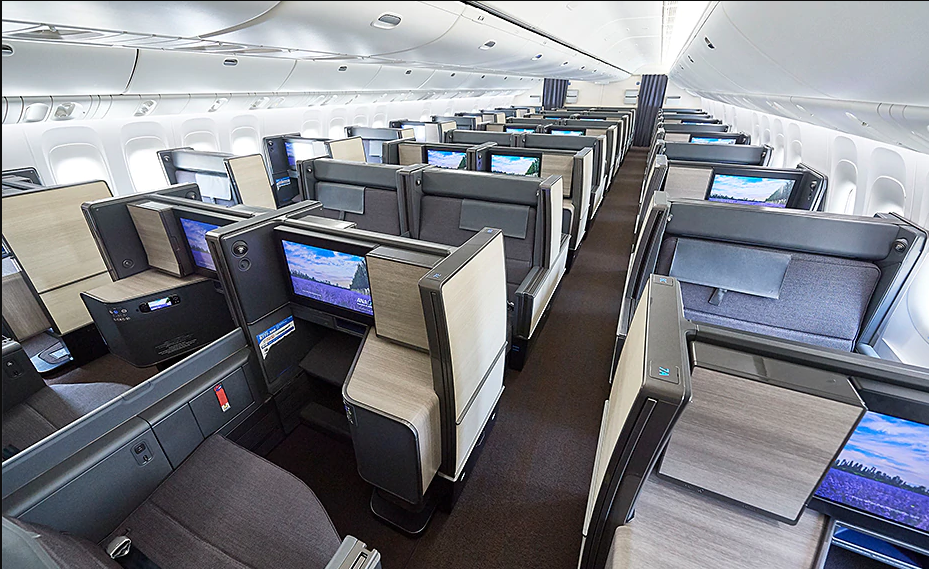 Every seat along the cabin wall is a window seat, with direct window views in every suite. On the starboard side of the aircraft, the reverse-facing seats have the main seat up against the window, for those who prefer the view from the window as their primary form of entertainment, while the port side is the opposite.

The new cabin will see 64 of the new business class suites, a reduction of four seats from the previous configuration that was featured on the routes. Despite the loss of capacity and overall upgrade to the product, premium passengers won’t be charged an additional premium for the product as Shigeru Hattori, ANA’s Senior Vice President of the Americas, told AirlineGeeks that fares for THE Room will remain consistent with fares for the previous product.

In the more prestigious first class cabin, a new fully-enclosed suite – aptly-named THE Suite- will replace the more open first class product currently found on the Boeing 777-300ER. While THE Room is entirely new to any ANA aircraft, THE Suite has been in service with ANA since May when it debuted on the airline’s FLYING HONU Airbus A380 exclusively serving the Tokyo-Honolulu route. 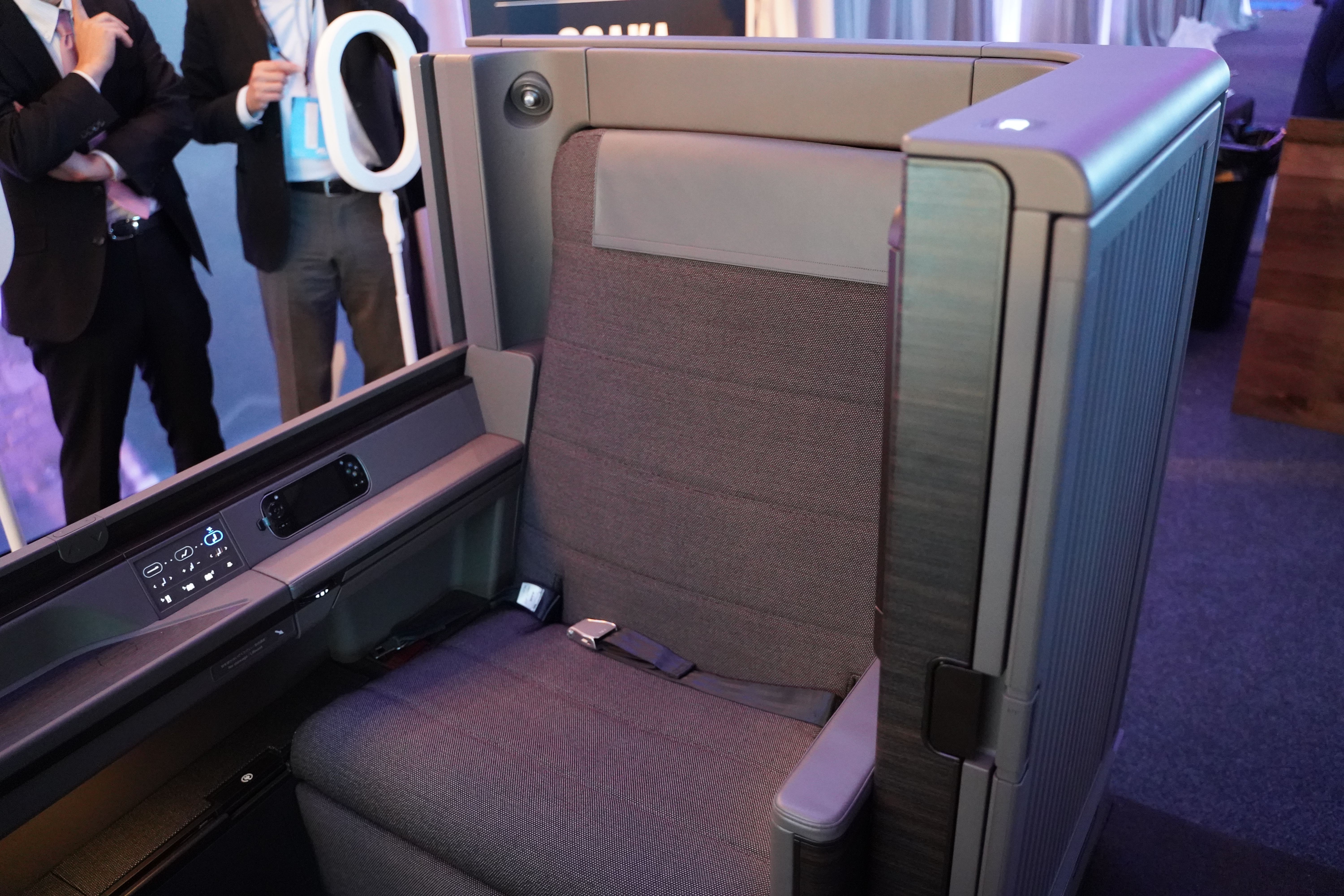 Only eight suites arranged in a 1-2-1 configuration make up the two-row cabin that is the most exclusive on the aircraft. Despite their small number, the suites are large enough for two people to dine in as there is a cushioned seat on the opposite side of the throne. 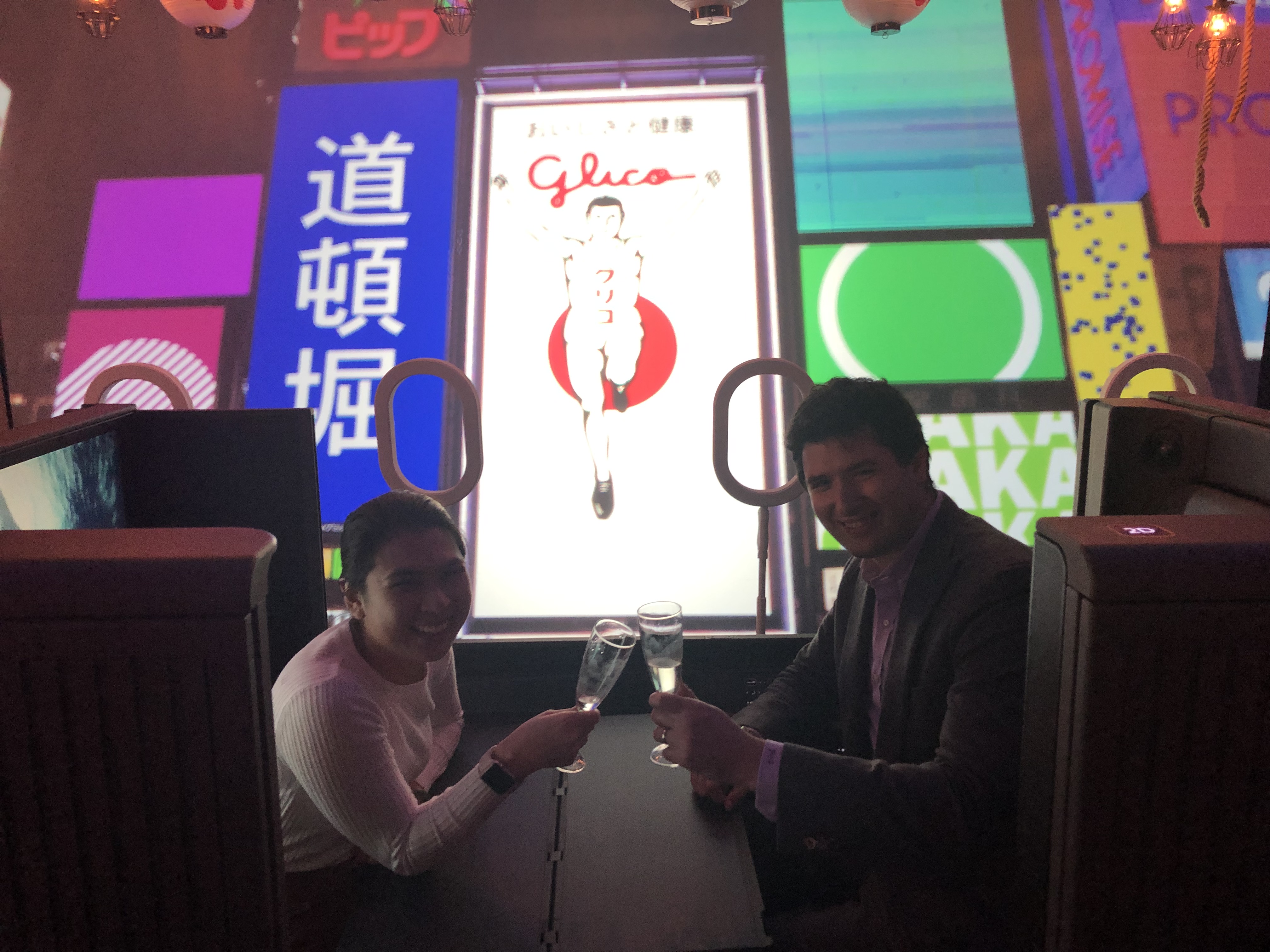 THE Suite is large enough for two people to comfortably dine at one table. (Photo: AirlineGeeks | Tom Pallini)

Offering the greatest amount of privacy on the aircraft, the suite features high walls with two sliding doors. The interior of the suites is more open and does not feature the side counters found in the business class suites. As such, the seats are larger and there are fewer obstructions, allowing for more room to stretch out and a large bed when in lie-flat mode. 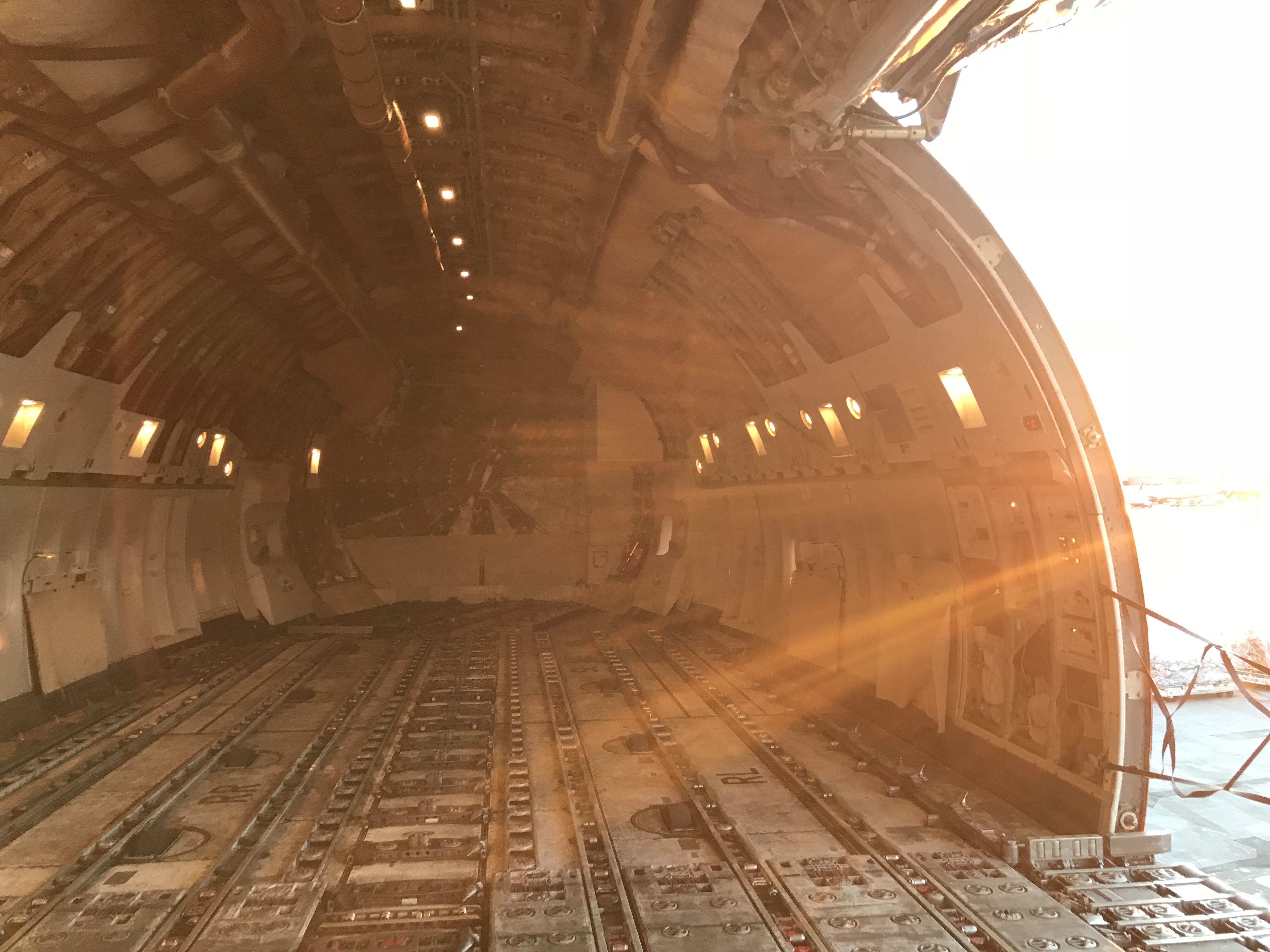 THE Suite focuses more on space than it does counters with few obstructions inside the suite walls. (Photo: AirlineGeeks | Tom Pallini)

While counter space is at a minimum, the suites offer some of the most storage space with numerous compartments within the suite and along the cabin wall being suitable for small items during the flight. There is even a small personal closet to hang a coat.

Controls along the side of the suite control the seat recline and accompanying the large space is a 43-inch 4K in-flight entertainment system. 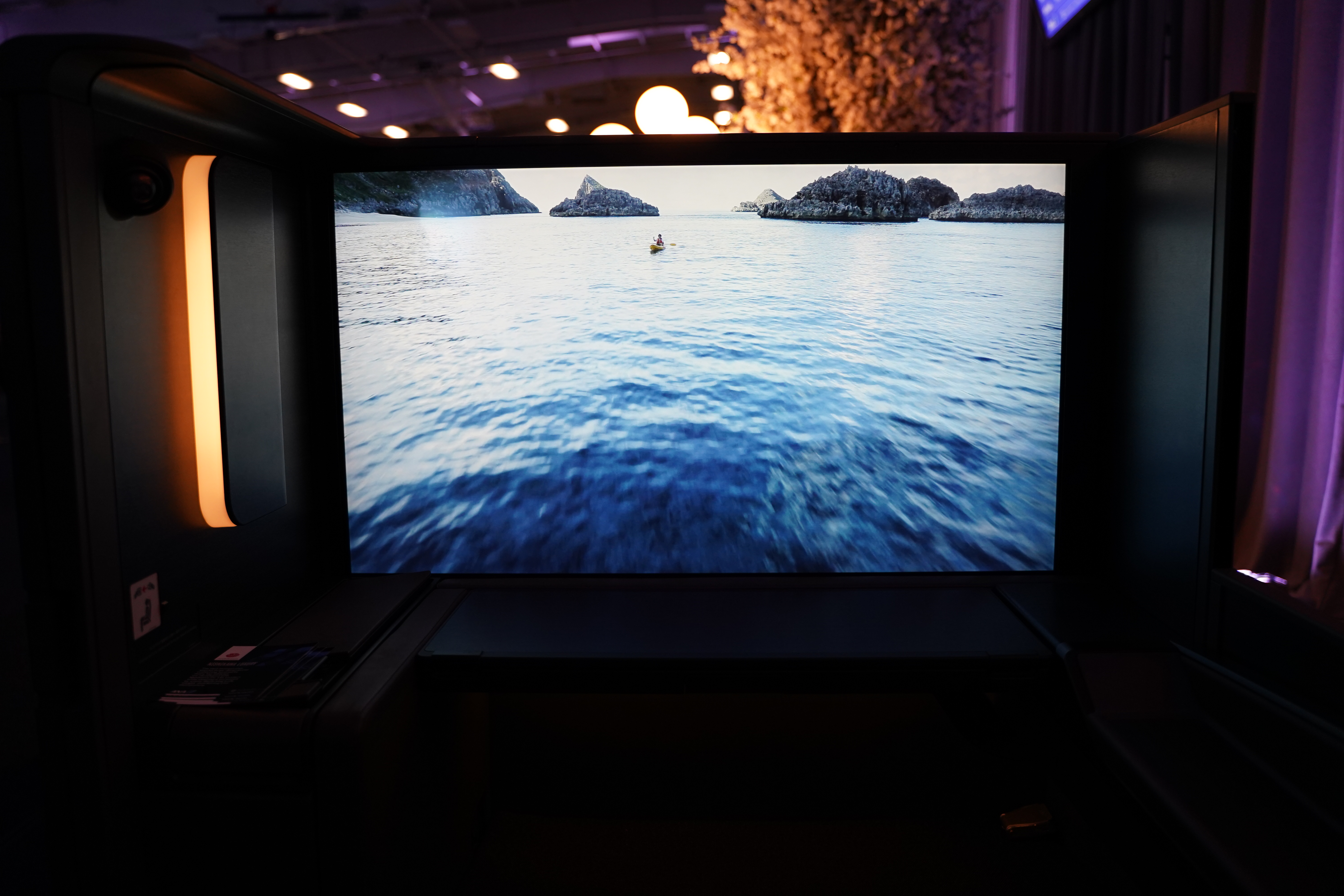 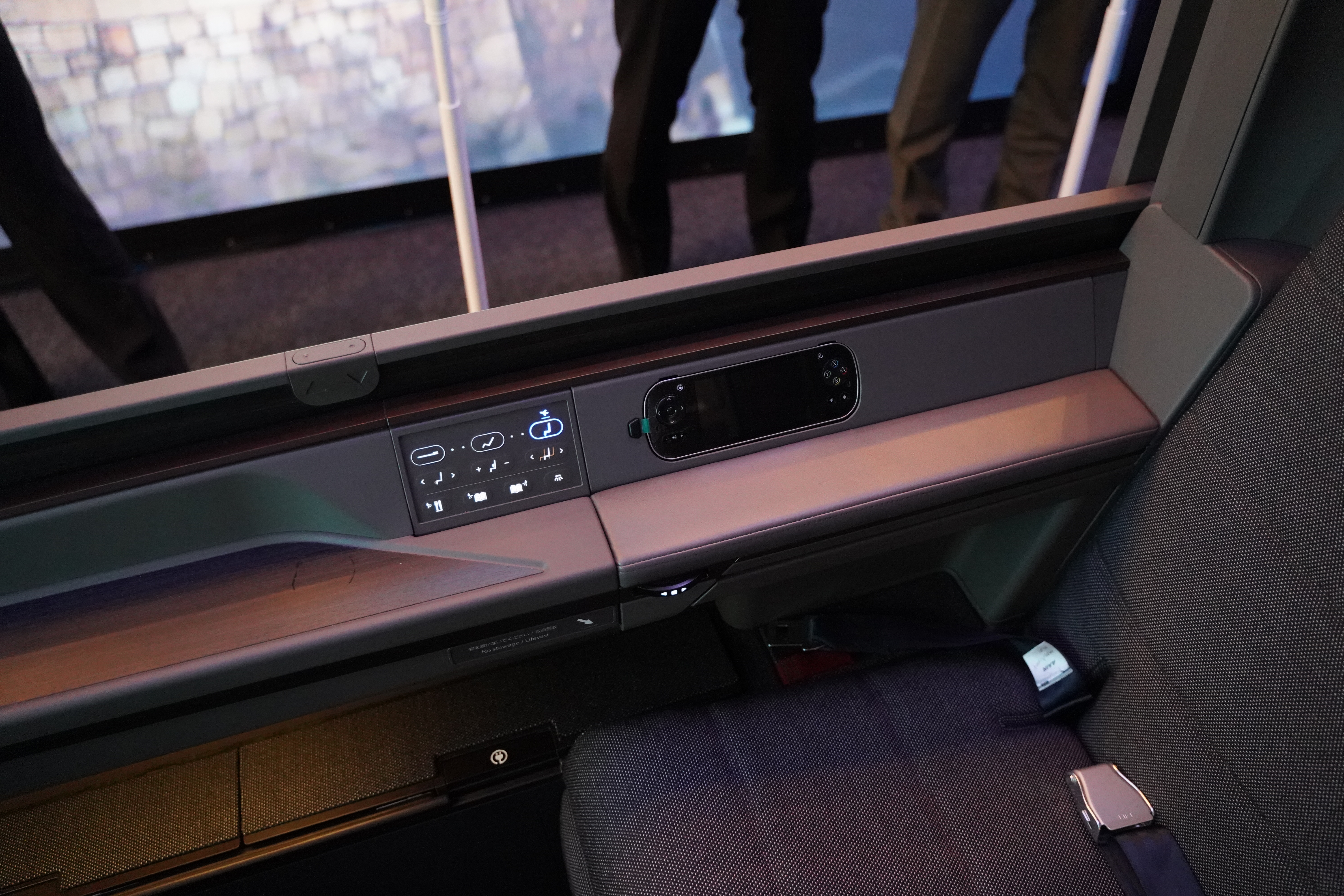 The tethered remote and seat controls are found directly next to the seat. (Photo: AirlineGeeks | Hemal Gosai)

All suites in this cabin are forward-facing and those along the cabin wall offer unobstructed views out of the window. Similar to business class, center-aisle suites offer partitions that raise and lower depending on the occupants’ preference.

The launch comes as Japan prepares to welcome visitors from across the world for the upcoming 2020 Olympic Games and Paralympic Games, slated to be held in its capital city. As one of Japan’s main international airlines, many of the games’ spectators, competitors, support staff and other visitors will undoubtedly be taking All Nippon Airways to the games and the airline views itself as the first impression to those traveling to the country.

While the enhancements seem to focus on the premium cabins, premium economy and economy, which make up the greatest number of seats on the aircraft, will be getting upgrades of their own, as well. The premium economy seat will be upgraded to the airline’s most modern, also found on the FLYING HONU Airbus A380 and economy will feature such enhancements as larger in-flight entertainment screens, foldable tray tables and footrests. 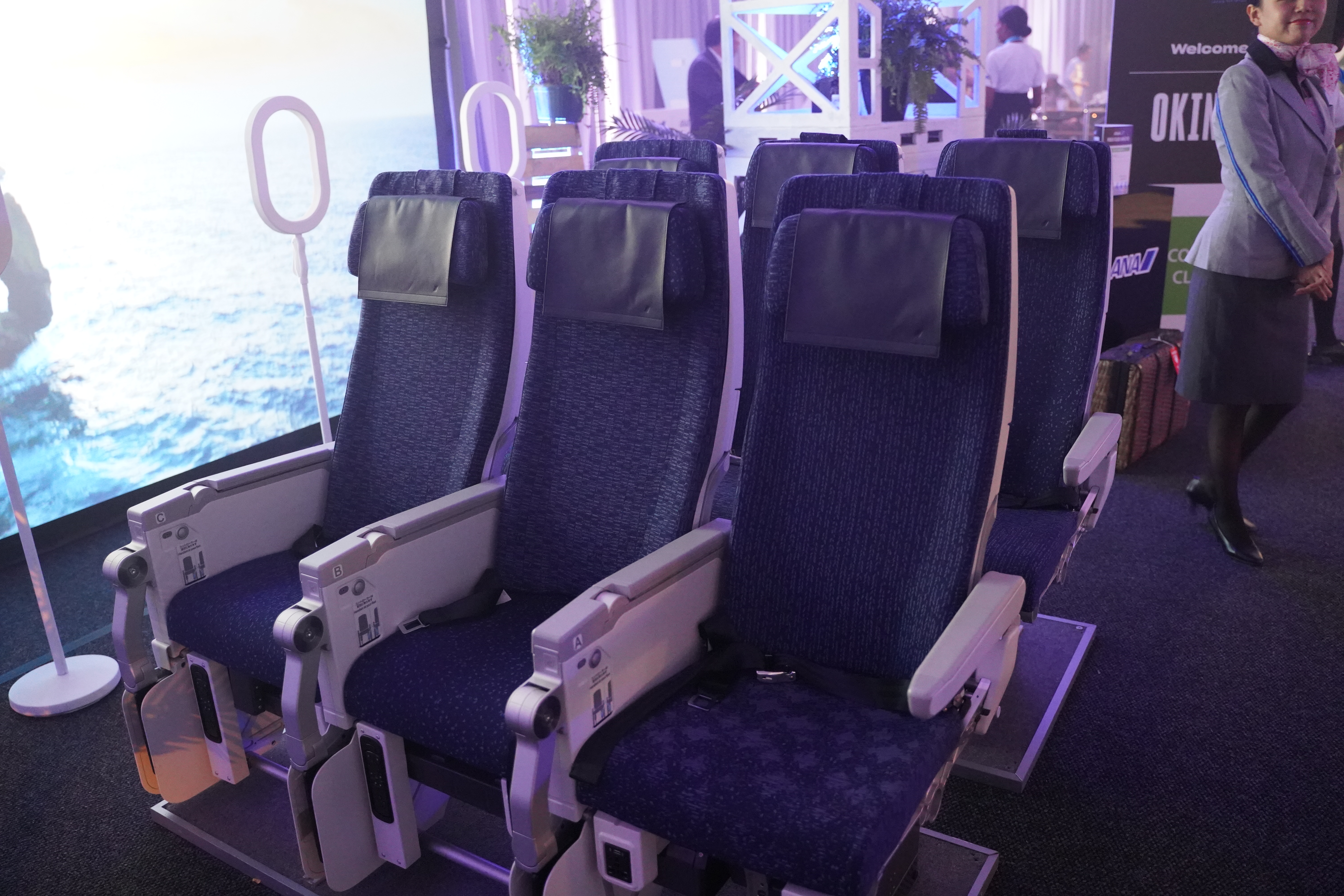 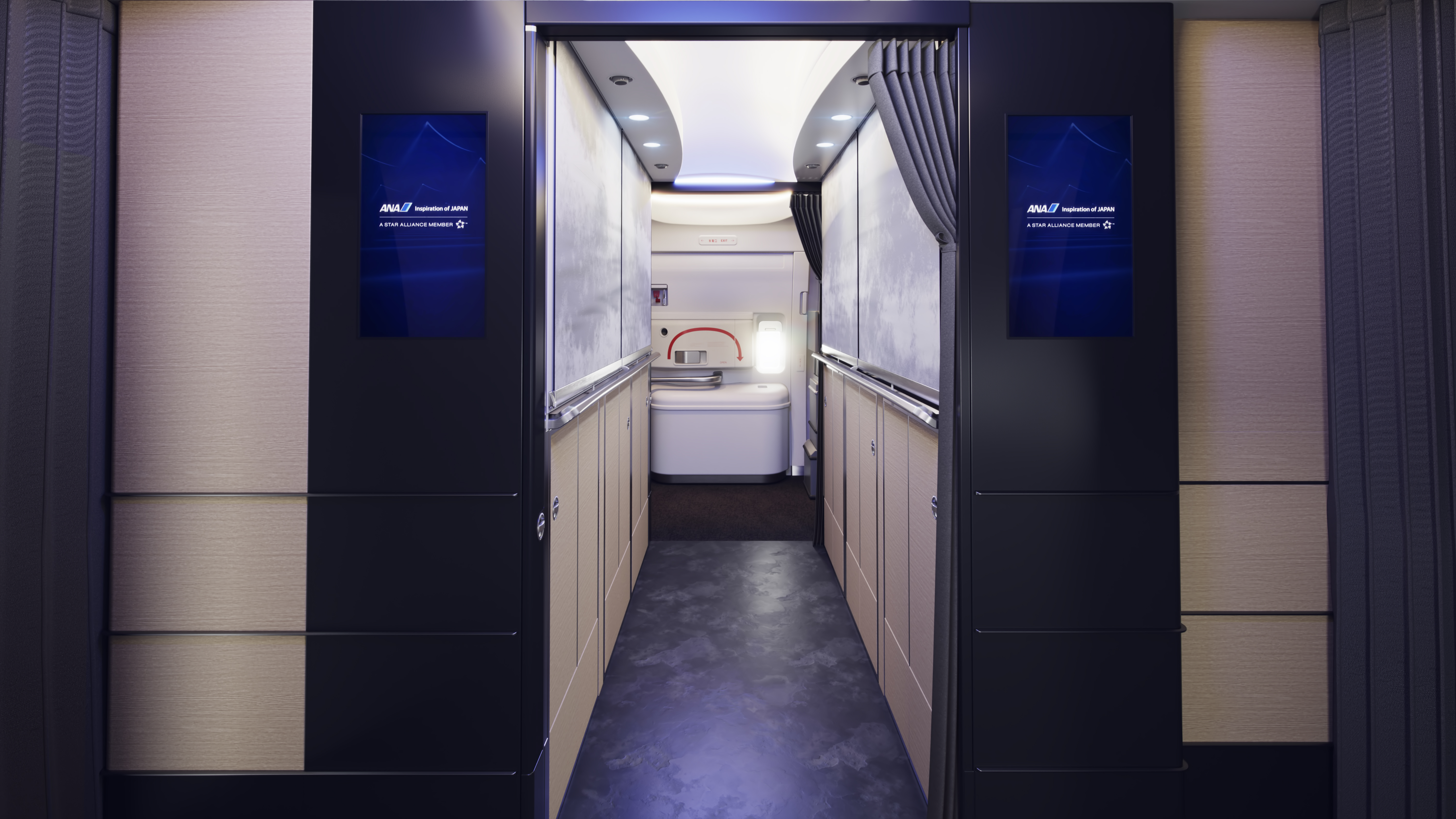 A redesigned entranceway will welcome passengers onboard the aircraft. (Photo: All Nippon Airways)

Though the product will only be found on flights to London, New York and Frankfurt, for the time being, All Nippon Airways has said it is considering a further expansion of the product on more of its routes. With new products and service enhancements in each cabin, ANA’s Boeing 777-300ER is quickly becoming one of the most sought after in the sky with THE Room and THE Suite set to take on even the best premium class products currently flying.