If you have traveled across America, you have probably heard the calls for, “Welcome aboard the PlaneTrain” or, “This is Orlando Mayor Buddy Dyer” at the beginning or end of your trip. These calls have come from automated people movers, or APMs, which create a way to rapidly move passengers across airport grounds. Originally marketed as a way to lure in passengers by removing the long walking distances, the equipment has become a mainstay in airport construction and taken on the role of being the largest APMs in the world.

American airports are very familiar with utilizing the automated people mover in terminal designs, with nearly 50% of all constructed people movers at airports residing in the U.S. Much like their international counterparts, these systems are designed to be built for passenger movements both between airside concourses and travel landside from parking lots and transit lines to the terminal themselves.

The first ever utilization of the automated people mover at an airport was done in the 1970s at Dallas Love Field Airport. The system, titled the Jetrail, was operated by Braniff International as a way of better connecting the airport’s distant parking lots to the Braniff terminal. The system was short-lived, with Braniff moving operations to Dallas-Ft. Worth International Airport in 1974, just four years after constructing the Jetrail. The system would stand till 1978 when it would be dismantled for sale, with no automated people mover appearing at Love Field since its loss.

For the oldest automated people mover, one would have to turn their attention to Florida, where Tampa International Airport operates one of the oldest and the newest APM lines in the country. The airport constructed its original landside to airside transit lines alongside the opening of the airport in 1971. The train lines would operate two alternating trains per airside with the Bombardier Innovia APM 100 during the people hauling. Airside B’s system would be discontinued when the concourse was closed, leaving just remnants of the old system.

Tampa has since added two additional lines in the more recent years to help move travelers along the landside portion of the airport. The Tampa International Airport Monorail was added in 1991 to give new options to get from the landside terminal through the long-term parking on campus. This was achieved using an entirely enclosed system and the Bombardier UM III to operate the small loop. Most recently, Tampa has continued to make moves with the ability to link operations in the airport with the arrival of the Tampa International Airport SkyConnect, which opened in 2018. The SkyConnect is the first APM for Tampa which departs the centralized terminal complex, using Mitsubishi Crystal Movers to connect the landside terminal to the off-campus parking garage and rental car center.

Between the 1970s and 1980s, the utilization of the automated people mover was slow to spread across the U.S. Lines such as the original two Orlando International Airport airside lines, the Atlanta PlaneTrain, the MIA eTrain, DFW Airtrans, Seattle Satellite Transit System and McCarran International Airport Automated People Mover green line were formed for intra-airport movements in before 1990. Since Atlanta has taken the crown for being the largest airport in the world, the stress for moving passengers between the multi-concourse complex has landed the PlaneTrain the title of busiest APM in the world. 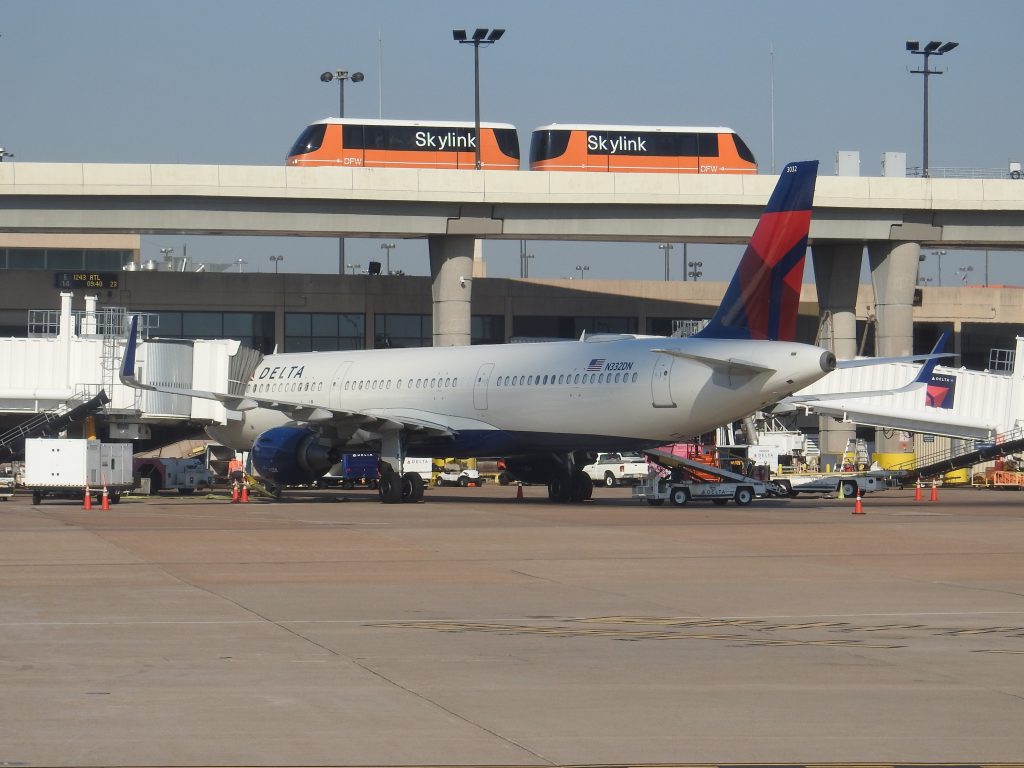 Furthermore, trains took on the role of linking preexisting public transit to airport terminals. Lines such as the AirTrain Newark, the AirTrain JFK, Phoenix’s SkyTrain and Orlando’s Intermodal System line have all been built to connect to other train lines.

In the more recent years, trains in Phoenix, Sacramento, Miami, Washington D.C., Oakland and Miami have created lines with different purposes. These lines range from connecting terminals to creating ways to link parking and rental car structures to the terminals. In doing so, these airports have created ways to reduce airside transit times and remove corporate cars from the airport terminal roads.

In terms of models used on APM routes, the most common design was originally created by Westinghouse. The Westinghouse Innovia APM was created in the 1960s and was first utilized at an airport in the airside to landside Tampa line that was built in 1971. The Innovia APM construction has shifted ownership both to in the 1970s Adtranz before a merger with Bombardier would let the Canadian company take hold of the train. The transit constructors have created almost half of the automated people movers in the U.S. since the 1970s.

Of the five major Innovia designs implemented at U.S. airports, the original Innovia APM 100 has become the most popular design to be used. The traditionally two-car trainset has a central guideway system with rubber tires riding on an elevated road. The design comes with a capacity of 105 passengers per car in a mixed handlebar and seating configuration. The train has a top speed of 34 miles per hour and each car has an overall length of 42 feet.

However, Bombardier’s dominant design has not stopped competition. The new favorite design amongst airports is the Mitsubishi Crystal Mover. The design has appeared on lines in Orlando, Atlanta, Miami and Tampa as the train offers similar performance as the Innovia APM. The Crystal Mover seats 105 passengers per car and uses the guiderail with rubber tires, which has allowed Orlando to replace the aging Innovia APM 100 models on the original lines without replacing the existing infrastructure. The train has a top speed of 43 miles per hour and allows for single-car and double-car operations. 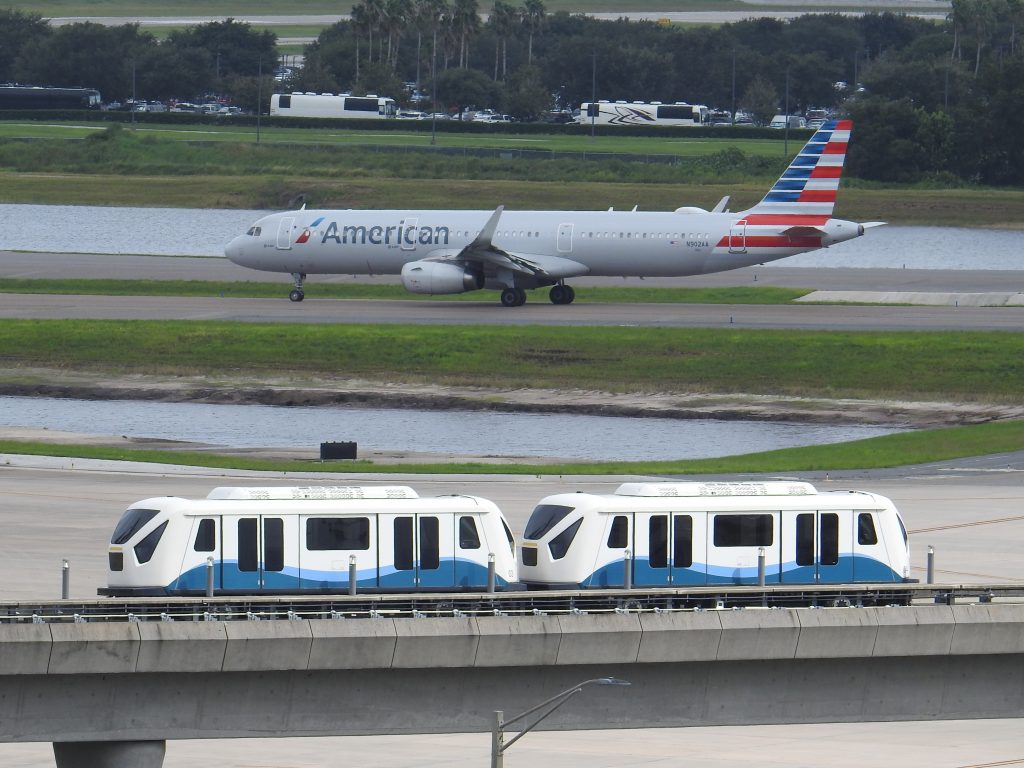 While Mitsubishi and Bombardier have come to dominate the market, there are other designs that can be seen across America. Minneapolis uses two different Poma-Otis designs with Hovair and steel cable designs. The Otis Hovair also appears in Detroit as a link along the lengthy Edward H. McNamara Terminal. Newark uses a different Bombardier design in the Von Roll Mark III, a boxier design that was only ever implemented in the U.S. at the New Jersey airport. Also being unique is Oakland’s Coliseum-Oakland International Airport line, as it is the only U.S. airport line with the Doppelmayr Cable Line design as a means of transitioning people from the airport to the BART mainline at Coliseum Station.

Only two lines have been disconnected since the beginning of the APM movement at U.S. airports although that number could double. The two previous lost lines were both in Dallas, where the Love Field Jetrail and DFW Airtrans were removed as operation shifts and newer designs like the DFW SkyLink would replace them. Current governmental plans could see the AirTrain Newark and Pittsburgh APM being replaced. Newark would like a newer design as the 20-year-old Von Roll Mark IIIs are showing age, while Pittsburgh’s consolidation into a single terminal structure would remove the demand for an airside to landside train.

But if the construction plans go through, the chances of seeing automated people movers at airports going forward is going to become even more common. Los Angeles, New York, and Boston are all either planning or constructing these trains for use at their respective airports. Plans call for these trains to begin seeing action sometime between 2023 and 2025. Furthermore, expansions such as the Phoenix SkyTrain will see new destinations as the rental car facility will be connected by the airport’s Innovia 200 models starting in 2022.