A look at the future of LGA (Graphic provided by Gov. Cuomo)

Amid much speculation, Governor Andrew Cuomo announced plans today to drastically renovate the aged New York LaGuardia Airport by combining four terminals into one large terminal, creating a skytrain to allow easier passenger access to the city, and significantly upgrading interior features of the airport that was once referred to as a “third world country,” said Vice President Joe Biden.

“It’s not a plan, it’s not a sketch, it’s not a dream. It’s a vision,” Governor Cuomo said. “It is actually happening.”

The plan calls for $4 billion of funding to allow the airport to move 600 feet, resulting in more space for passengers and increased access for aircrafts. Funds will be provided by the New York/New Jersey Port Authority as well as other private interests. It will mark the first time the airport has received a complete upgrade since its founding 76 years ago. While the airport is limited now to only having flights of up to 1500 miles, it has quickly become overcrowded due to increased demand for travel on the East Coast and throughout the Midwest. 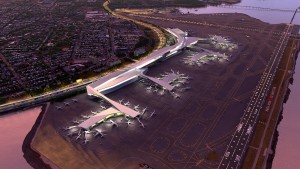 An aerial view of the revamped LGA (Graphic provided by Gov. Cuomo’s website)

Frequent flyers know the airport well for its dimly lit concourses, lack of walking space between gates, and outdated features that have resulted in the airport’s negative press image. Possibly the most shocking part of the announcement was Delta’s agreement to build the brand new terminal when it itself has spent nearly $260 million since 2012 to upgrade its own terminal. Airport officials hope that one major terminal will result in easier connections for passengers. 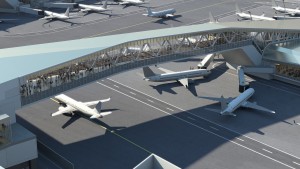 A bridge similar to DIA’s that connects the terminals. (Graphic provided by Gov. Cuomo’s website)

Currently the airport does not offer a subway station, but as a part of the announcement, the Port Authority believes that the time has come to build a skytrain that will connect the airport to the major subway system throughout New York City. Feasibility plans have not yet been completed, and many are expecting the plans for the Skytrain as well as the airport to be delayed beyond the estimated completion date in 2021.

“This is just a metaphor for what we can do, when we work together and have the ambition and optimism and energy that made New York New York in the first place,” Governor Cuomo said.

Along with Governor Cuomo, other special guests appeared for the event including Vice President Joe Biden as well as former President Bill Clinton. The governor also went on to announce plans to convert the aged TWA terminal at John F. Kennedy International Airport, also in New York, into a $265 million modern hotel by 2018.

DHL Express and Seattle-based aircraft manufacturer Eviation have teamed up to "electrify aerospace." On Tuesday, DHL announced it is building the first-ever electric aviation network and has ordered 12 Alice eCargo jets from Eviation. The partnership will pioneer sustainable aviation and shape the future for zero-emission cargo and passenger flights.…