A United 777-300ER is loaded with relief supplies in Chicago (Photo: United Airlines on Twitter)

At 6:54 a.m. Central Time on Tuesday, United Airlines flight 2757 took off from Chicago’s O’Hare International Airport bound for San Juan, Puerto Rico. When the Boeing 777-300ER touched down at 12:14 p.m. local time, airline employees onboard were greeted by the destruction Hurricane Maria left in its wake just days prior.

Nearly 3.5 million left without power, thousands displaced, an island in shambles. With everyone left to clean up what remains of homes, schools, hospitals, many were unsure how they would be able to endure the trials that are to come.

United flight 2757 is one of the numerous flights airlines are flying into and out of the U.S. territory in order to bring in supplies and get those stranded out. On an average day, 12,000 passengers board flights at San Juan’s Luis Muñoz Marin International Airport, but after the storm, those numbers had plummeted, leaving many travelers and businesspeople alike on the island with nowhere to turn.

But even before the weekend began, airlines including JetBlue had already begun their relief efforts. The New York City-based carrier by flying down two Airbus A321 aircraft filled with supplies and provisions. One of these aircraft also brought along with it New York National Guard members and New York Governor Andrew Cuomo.

Proud to join @NYGovCuomo on a relief mission to San Juan to deliver food and supplies for Puerto Rico #100x35JetBlue pic.twitter.com/PufbMUJVCR

Due to conditions at the airport, American says they’re permitted to operate only three round-trip flights per day into San Juan. 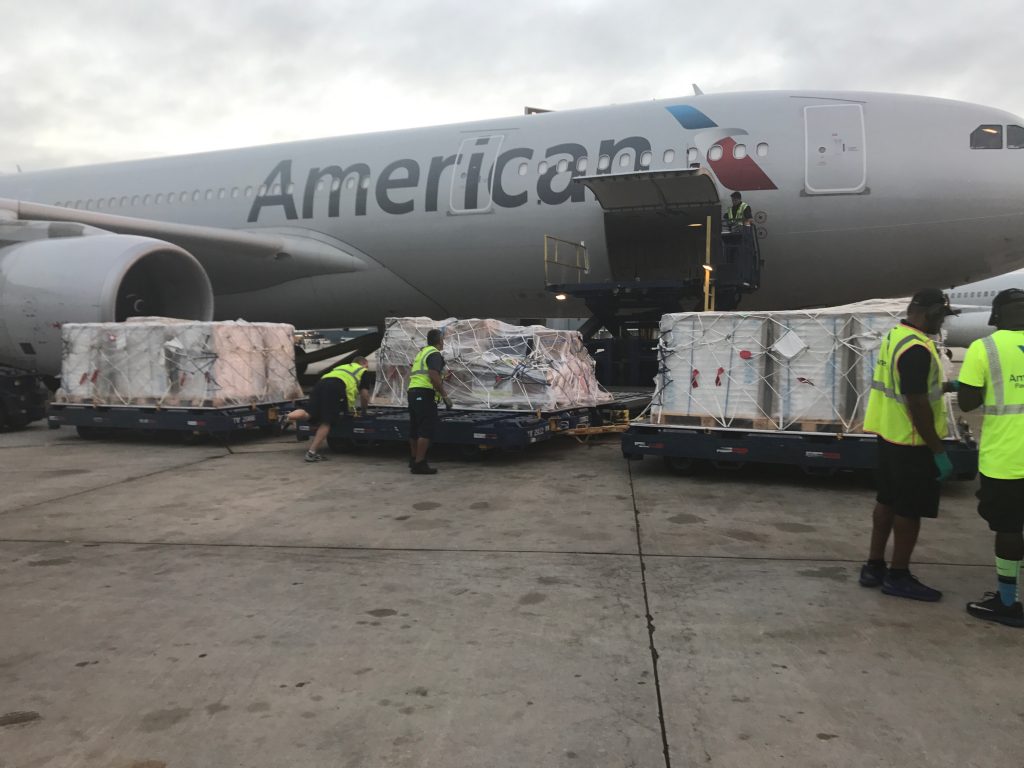 With the vast majority of the island without power and thus without running water, supply missions like these are crucial to providing the millions of Americans there with the necessary provisions to survive until everything is back to normal, with some experts speculating the full extent of the damage will not be repaired for decades.

Maria is just the most recent of numerous storms to wreak havoc on not only the airline industry, but also the nation’s infrastructure and morale in recent weeks. Hurricanes Harvey and Irma devastated the Texas and Florida coasts, respectively, as they arrived in relatively quick succession.

Airlines, especially in the case of Harvey, utilized aircraft and employees to help. But the main difference in these cases is that neither will likely have the same lasting effects as Maria.

Multiple airplanes packed with supplies and airline employees continue to fly down to Puerto Rico every day in order to help all aspects of recovery. But with no end yet in sight, airlines will continue to be a crucial part of the relief process day in and day out.

AirlineGeeks.com’s Parker Davis and Ryan Ewing contributed to this report.

Europe’s two low-cost giants Ryanair and Wizz Air are in an open conflict over Buzz, a subsidiary of the Ryanair…

According to local media, Japan Airlines is expecting a full recovery of its domestic demand as early as this October…

Portugal’s government has agreed to pay €55 million ($62 million) to increase its stake in TAP Air Portugal, the national…

Emirates, Boeing's biggest 777X customer with 115 firm orders, expects another delay with deliveries due to the ongoing novel Coronavirus pandemic. The airline no longer expects to receive its first 777X next year, Emirates chief operating officer (COO) Adel Al Redha told Bloomberg on Thursday. After there had previously been…

According to aero-naves, Volaris has since May become the carrier with the highest daily number of operations in Mexico. Currently,…

Czech Airlines, the flag carrier of the Czech Republic, is planning to operate a number of scenic joy flights over…

Amid the COVID-19 pandemic, routes provided by Essential Air Service (EAS) — a Department of Transporation (DOT) program that subsidizes…