British Airways and the Boeing 747 — A Look Back Through History

The warning signs were there in March when the coronavirus stopped the aviation industry dead in its tracks. The knock-on effects from the global downturn of passenger traffic were already being calculated by airlines across the world, with decisions being made for what life would look like for airlines post-COVID.

When chaos and disruption occur in the industry – September 11, the 2008 financial crash and now the coronavirus pandemic – airline bosses and bean counters look at ways in which they can alleviate the loss of revenue from company finances and make efficient changes for the future. One of the easiest departments that can be financially re-assessed is an airline’s fleet.

Airline operation teams immediately examined what their fleet plan would be like post-COVID and how they would go about bringing in enough money, blood to the airlines, back into the revenue system while mitigating the losses that would have bankrupted a lot of airlines without state support. Especially at older legacy airlines, which have a variety of aircraft, can the necessary changes be made so that future flights generate the right balance between the cost to operate the flight and the number of fare-paying passengers it carries to its destination?

And so, in a world where ETOPS twin-engine long-haul aircraft dominate the skies, the Boeing 747, which still operates 51 years after it first took off from Seattle, is naturally under the feasibility microscope with its operational future in the balance.

KLM and Qantas were already due to retire their 747s ahead of British Airways, with the Dutch flag carrier initially planning on retiring the quad-jet in May 2021. That was brought one year forward when PH-BFT, operating KL686, touched down at Amsterdam Schiphol Airport for the last time on the afternoon of March 29 coming in from Mexico City. In total, KLM operated 46 747s starting in 1971 with the 747-200B right up until the 747-400M, a Combi variant allowing for extra carbo space at the expense of some passenger seats.

Over the past few weeks, Qantas has set up numerous events to celebrate the retirement of the 747 from its fleet. The airline has used 65 since the aircraft first joined Qantas’ the fleet in 1971. The airline scheduled to operate three one-hour “farewell jumbo joy flights” departing from Sydney, Canberra and Brisbane. The final 747 flight is due to depart Sydney on July 22 as QF7474.

Two airlines each with almost a 50-year association with the 747 bows out the aircraft from its fleet, one airline remains. All eyes turn to British Airways and what it will decide with the Queen of the Skies.

British Overseas Airways Corporation (BOAC) and British European Airways (BEA) merged in 1974 to become the British Airways we know today. The marriage brought a mix of mostly-British-built aircraft under the flag of a national airline, with the only exceptions being the Boeing 707 and the Boeing 747.

BOA began its association with the 747 back in 1966 when it placed an initial order for twelve 747-100s, becoming the aircraft’s sixth customer. The first 747 in BOAC colors was delivered on April 22, 1970. However, the first passenger flight didn’t take place until one year later after disagreements between the airline and its unions dragged on over crew pay for the new type. During the delivery period of the -100, the airline underwent its transformation into the British Airways we see today and would go on to operate 18 of the -100 variant, according to Circium fleets data. 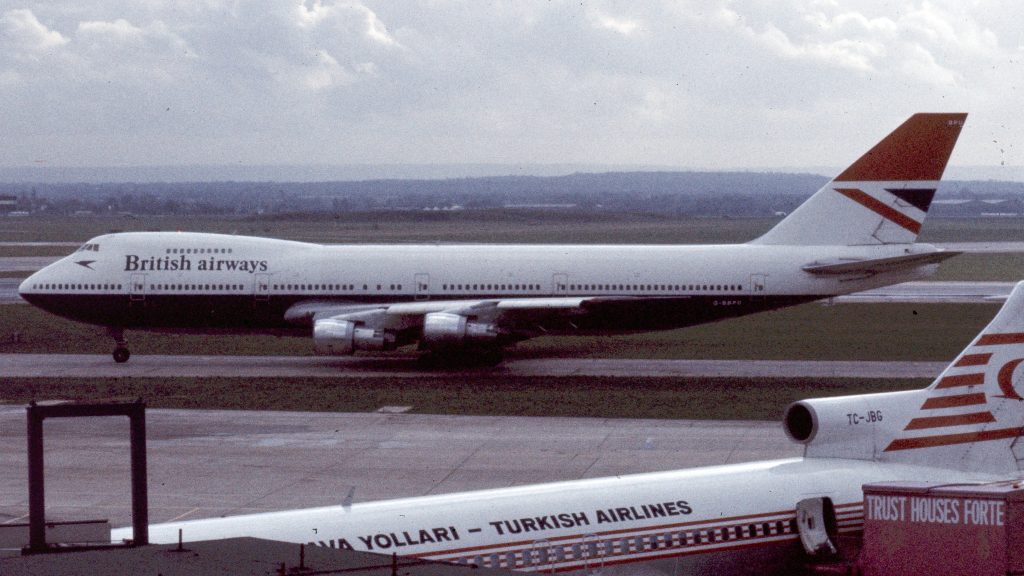 Another Variant, Another Order

In 1977, British Airways placed an order for the 747-200B variant, which was powered by the Rolls Royce RB211 engines, the benchmark engine type that would stay with British Airways until today. 18 were delivered to BA as the standard -200B model, while six were delivered as -200B Combi variant. Two 747-200F all-freight models would don the BA scheme, including leased aircraft.

In 1984, as part of the celebrations to mark the opening of the new runway extension at Leeds-Bradford Airport, the Yorkshire Post, a local newspaper, chartered G-AWND, a British Airways 747-100 “Spirit of Yorkshire,” to visit the northern city and undergo a scenic flight, bringing hundreds to the airport to see a 747 for the first time. 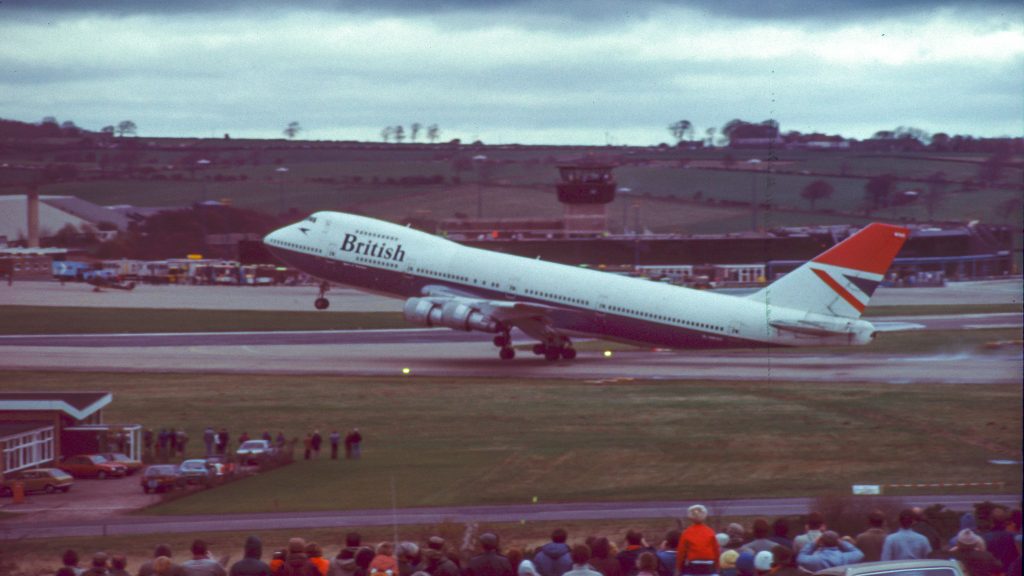 Hundreds look on as the first 747 to take off from Leeds rotates towards the sky. (Photo: Graham Dinsdale)

The acquisition of British Caledonian in 1987 saw BA obtain one -100 and four -200s from the U.K. leisure airline.

British Airways went on to become one of the launch customers for the 747-400 variant, placing an initial order of 16 with another 12 options in 1986. The first two to arrive at Heathrow in 1989 were in the Landor paint scheme, which was brought back to life last year as part of the airline’s centenary celebrations.

According to FlightGlobal, British Airways eventually had 63 747-400s on order but stopped taking delivery of them with five left after ordering a number of 777-200ERs instead.

British Airways operated its highest number of 747s in 1998 when there were 75 in operation. This was the same year that the last of the -100s were retired, 27 years after the first one took off for BOAC. One year later, the final 747 delivered to British Airways joined the fleet in April as G-BYGG. 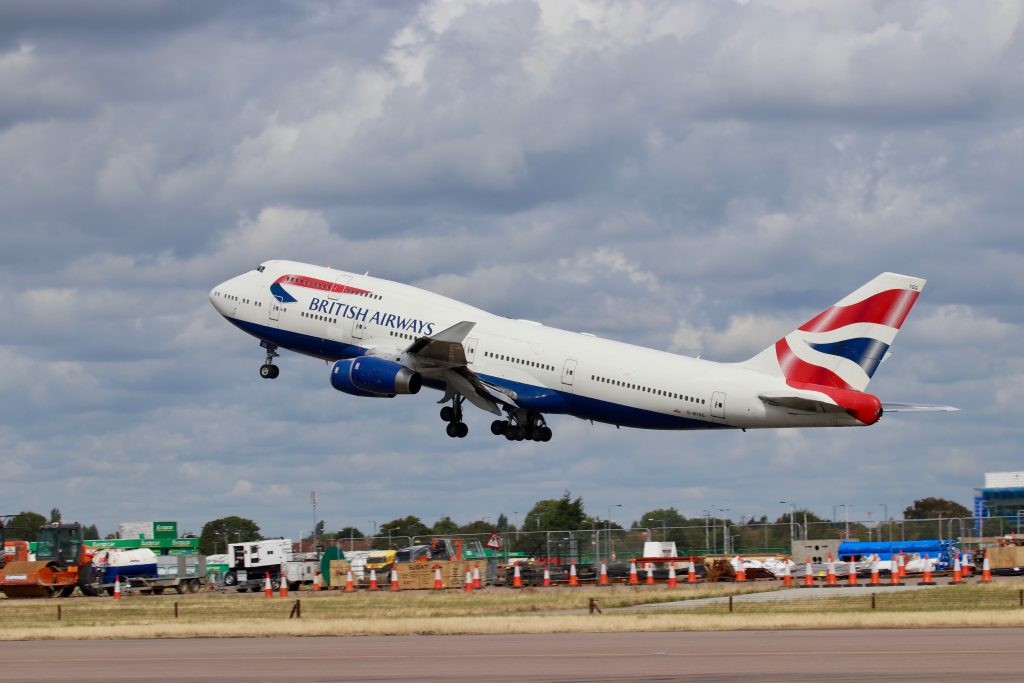 The retirement of the aging -200s was accelerated after the September 11 attacks in 2001 and the subsequent drop in global traffic demand, bringing the fleet number down to 57 aircraft in 2002. For the next few years, with the return of one or two -200s, British Airways’ 747 fleet hovered around 60.

While many carriers began to shed the four-engine aircraft in favor of the 777 and 787, British Airways maintained a large fleet of 747-400s, which for a while made the airline the largest 747 operator in the world. Although it retired its first -400 in 2008, BA planned on a gradual retirement for the rest of the fleet over a long period of time. This decision was boosted by the drop in oil prices as well as the airline’s decision to refurbish its 747 cabins as part of a multi-billion pound investment program.

2019 saw the airline celebrate its centenary year. To commemorate, three 747s were painted in retro liveries highlighting the history of the airline. Paint schemes formerly belonging to Negus, Landor and BOAC returned to the global skies once again.

According to the Official Airline Guide (OAG), statistical data the routes flown by British Airways’ 747-400s in 2019 saw on average 9.7 flights per day from Heathrow to New York-JFK, a total of 3,557 flights over the year. This was the biggest capacity for a route by the airline. Of which the offering of a huge number of premium seats justified the continued operation of the aircraft well beyond what many other carriers deemed worthwhile.

Now that coronavirus has put a dent in demand according to various industry analysts, the total seat capacity offered by BA between the two airports probably won’t reach the 1,000,000 figure that it did so in 2019. OAG says this was the only route that had a value of over $1 billion in the world.

Cape Town, South Africa; Lagos, Nigeria; as well as Accra, Ghana, were the only three airports outside the U.S that made the top 10 list of routes served by a BA 747 in 2019. With Cape Town, which was third, offering just over 1,000 flights out of Heathrow whilst both Accra and Lagos having just over 700 frequencies.

The rest of the list saw Miami, which came second behind JFK, having a frequency count of 1,886. LAX fourth with 1,026. Denver, Las Vegas, Washington D.C. and Philidephia making up the rest. 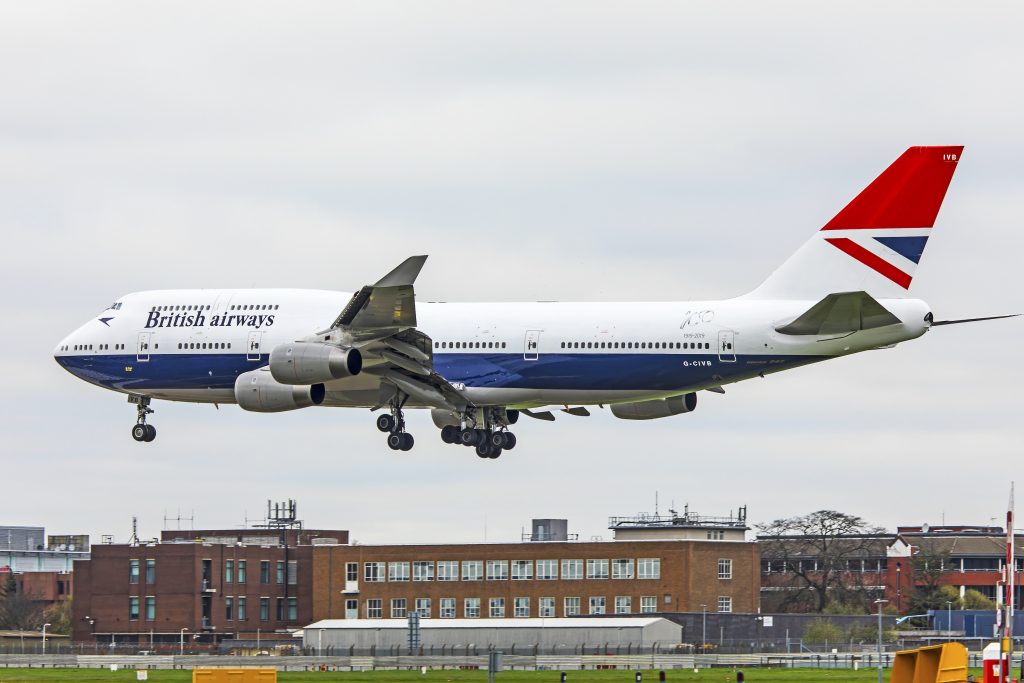 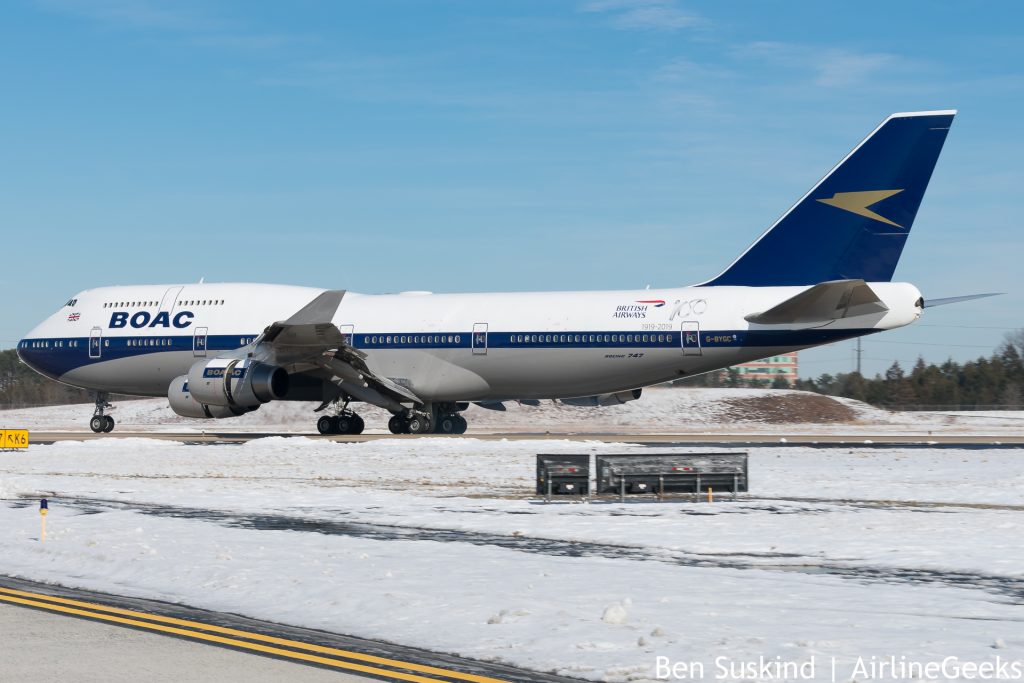 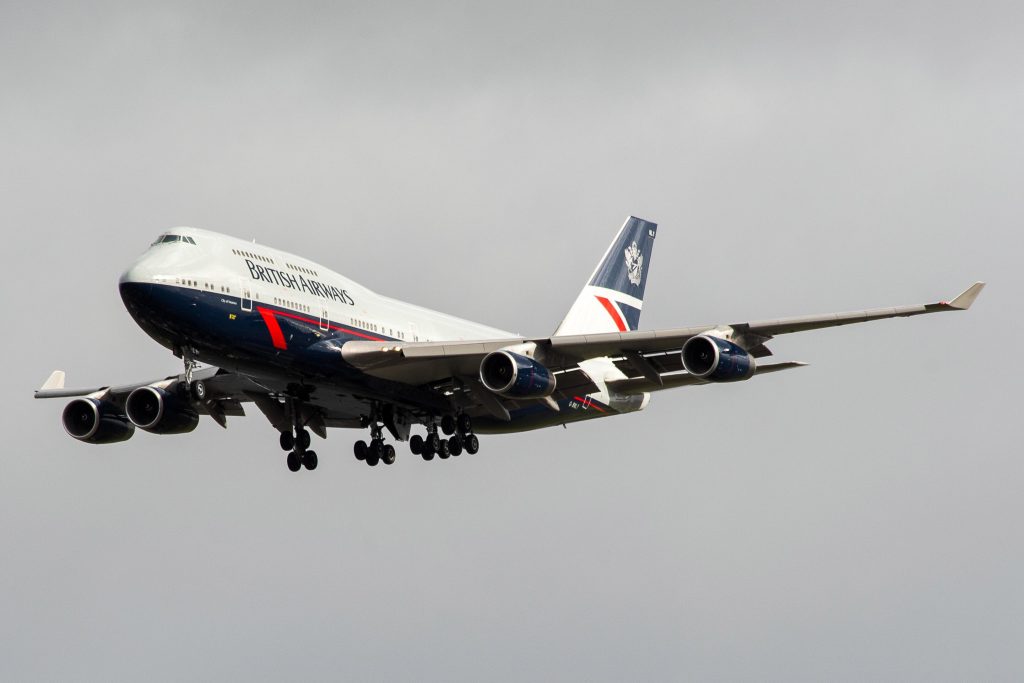 But this all changed following the impact of the virus across the globe. Especially as the disease appears to not have come under control in the United States, the main market for the 747, the main market for premium seats. Potentially one of the reasons why the fleet withdrawal decision was made if the airline expects the demand for transatlantic seats to fall.

The first hint came on June 19 when the airline announced it would temporarily suspend normal simulator training program for pilots on the type. Since there is no need to retrain pilots on an aircraft that will not fly in the future, BA saved a lot of money as it moved the 747 towards retirement.

The final nail in the coffin came on July 16 when the airline announced to employees that the Queen of the Skies would leave the airline for good, bringing to an end the 50-year partnership between aircraft and airline. British Airways’ decision to immediately retire the 747 means that the final flight took place on June 4, between Cape Town, South Africa and London’s Heathrow Airport.

Although the final passenger flight may have been flown, many hope that, once some form of normality returns to the aviation industry, there will be the opportunity to still fly on a British Airways 747 with special flights similar to Qantas’ farewell tour. At the moment, the remaining jets are scattered across a number of U.K. airports, including Heathrow, Bournemouth, Cardiff and Kemble.

In the end, over a 50-year period, British Airways ordered a total of 94 747s and operated around 108, including leases and three 747-8F freight aircraft. Only Japan Airlines ordered more 747s.

Lufthansa’s decision to order 19 of the 747-8i, the newest 747 variant, to compliment the 747-400 saw the German flag carrier offering the largest capacity for the type in the world. Also, it turned out to be the only European airline to operate the -8i version.

Only two other airlines, Korean Air and China Airlines joined Lufthansa in ordering the passenger variant of the new jet. But like the other carriers, it too has retired a number of its 747-400 fleet, with five being permanently decommissioned. With an average age of just 6.6 years across the 747-8 fleet, it would have been a huge financial decision to remove the entire 747 from its operations so early on.

Meanwhile, fellow British carrier Virgin Atlantic made the decision in May to retire its remaining seven 747-400s from its fleet as part of a restructuring program that would eventually help save the airline from financial ruin.

The ending of British Airways’ association with the Boeing 747 was abrupt and cruel. It was a household airplane with a household airline that has inspired generations and given so much by flying the flag across the globe.

But the decision made by BA is understandable, the finances dictate the aviation industry, which the coronavirus pandemic has highlighted to everyone. Let’s hope that in the near future, the airline can give the Queen of the Skies the send-off it so richly deserves.